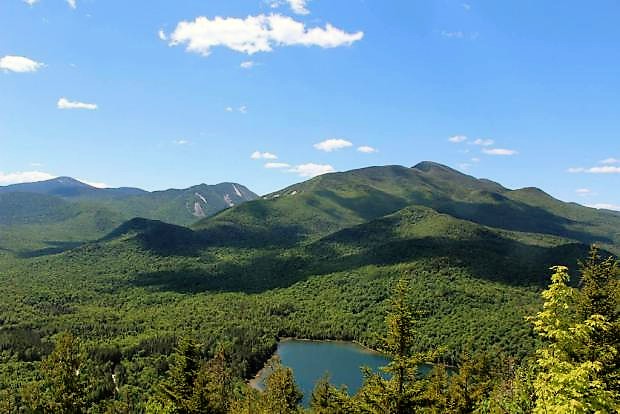 Juno and I had been looking forward to camping at the Adirondack Loj for a month since I’d booked our stay. I had reserved a canvas tent for us, in the hopes that it would keep Juno contained so she wouldn’t have to be leashed in there (spoiler alert: it did not.). The plan was to enjoy the lake and just hang out on our first evening there (Friday night) and then I had planned to hike Marcy in the morning on Saturday. Juno and I went swimming, and we had a nice time.

Well, it was about 40 degrees that night, and I had to hold onto Juno’s leash so she wouldn’t just duck under the canvas flaps, and she would get so cold that I had to scoop her up onto my tiny cot and wrap my sleeping blanket around her. Add to that the constant sounds of semi-large animals rummaging around outside the tent, and we did not sleep for a single second. When we got up in the morning, I was so thoroughly exhausted and didn’t think it would be the smartest idea to climb such a challenging mountain. Instead, I opted for Mt. Jo, a little mountain adjacent to Heart Lake, that would be an easy mile up-mile down hike. The trail started out right by the lake, behind the Loj, and I had beautiful views of the lake on the way up.

There were so many trail markers for all of the different trails that leave from the Loj, but I managed to find the right way. The trail up this mountain is actually a loop, with one path being much steeper and the other being more mellow. I opted go take the steep route up, and the gentle path down. The climb up was semi-steep, but I didn’t really have any problems. In fact, I felt so much better and energized than I had when I first woke up (well. Not “woke” up, since I never slept, but you know.). Eventually I reached a little junction that said the summit was very close, and I met a couple resting on a boulder there who were climbing their first ever mountain as their 20th wedding anniversary! They were so sweet, but I wanted to get to the summit, so I said I’d see them up there and carried on. I climbed over some large boulders, which was a little difficult, and emerged at the summit at 11:30am, after about 45 minutes of climbing.

The views were surprisingly gorgeous! I couldn’t find a summit marker (bummer) but the face was bald and offered gorgeous views of Mt Marcy and other high peaks, as well as heart lake.

I was up there for about 10 minutes before the couple from before made their appearance. We talked for a bit and they kindly took a photo of me, and I returned the favor. I snacked on some crackers and enjoyed the view, taking in the fresh air and feeling totally rejuvenated (good thing too, because I later had to drive my family 2+ hours home, and I didn’t want to be asleep for that). After about 30 minutes I took my leave, and descended on the nice gentle path back to Heart Lake.

Today I drove about 4 hours directly North from Spokane, to #nelsonbc . Of course I immediately had to wander the town, so I set off on foot to walk the path along the river, all the way to the aptly named #bigorangebridge, and back up to Baker St for a lovely 2 hour walk. Finishing off the day - as I type this - soaking in a hot tub allllll to myself 😎
Wandering around #hoopfest, pretty captivated by this river though! We spotted what we thought were buoys floating in an eddy, then realized they are basketballs!
We are in #spokane , baby! We're here for a day or two before wandering elsewhere, but we just happened to arrive during #hoopfest ! Gildo loves #basketball but I dont know the first thing about it. Still its pretty cool to see all these courts set up in the streets!
We had 3 nights at home in our own bed...Aaaaaand we're off again!
Boy did I miss this puppy! Im not sure who was more excited - her to see us, or me to see her. The zoomies when we pick her up from her sitter are what I always look forward to most when we come home!
Views of Manhattan from #brooklynbridgepark . After spending a few hours walking around here, I hopped on a subway and made my way back across the Hudson. Gildo was still in his conference so I decided to take myself out for a delicious meal of Pad Thai and bought the best cookies Ive ever had from #levainbakery 😍
As I have a habit of doing in cities, you know I had to walk across the Brooklyn Bridge at some point. It just wasnt even an option really. But good news! There was no burning garbage truck fire this time (re: pittsburgh trip). I walked across and spent a good amount of time enjoying the Brooklyn Bridge parks near the water, with a nice cool glass of lemonade.
More adventures in NYC. After leaving the 911 memorial, I wandered down to #batterypark to catch a view of #ladyliberty and the American Merchant Mariners Memorial before walking across Brooklyn Bridge.

I have a rare degenerative connective tissue disease called Ehlers Danlos Syndrome, and it makes every aspect of life more difficult. Nevertheless, I will not give up on hiking! Read more about EDS here: https://ehlersdanlosawareness.com/