As I walked out of band rehearsal at 9pm, I looked up and saw a burgeoning star-kissed sky, and realized that with new moon being only days away, tonight’s sky would be stunning. So I packed my camera gear and took off for Coney Mtn. I arrived at the trailhead at 11pm, shut off the car, and was immediately hit with the overwhelming pressure of darkness and quietude of the surrounding forest. It was a bit eerie, until I stepped out of the car and looked up. Through gaps in the trees I saw a veritable sea of myriad stars shining down on me. To be honest, I was a bit nervous to be climbing alone in the middle of the night, but having climbed this mountain once before I had a bit more confidence than if I were to climb something new in the dark. So I strapped my utility knife to my leg, donned my headlamp, and set off up the trail. 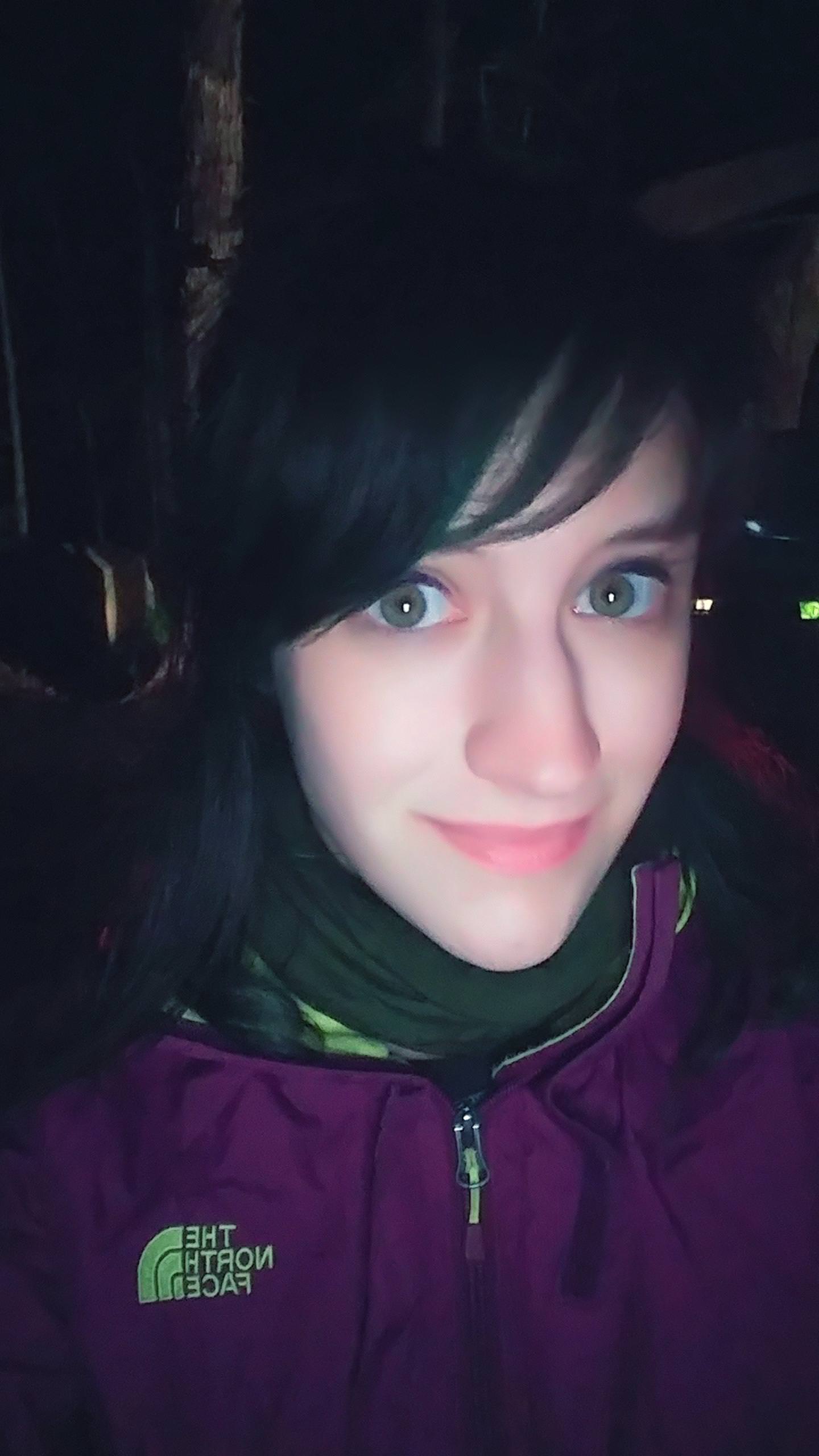 I cannot express how incredibly quiet it was. In the dark and quiet, even the tiniest sounds seem to be from massive creatures lurking in the shadows. However, after just a few minutes, I was feeling comfortable and right at home in the woods. Since I tend to be a quiet walker, I decided to whistle some tunes to give warning to any animals in the vicinity so I didn’t startle them. For whatever reason, the only melodies in my mind were Civil War ditties, like this, this, and this…..Yeah, I’m not sure what’s wrong with me either, but at least the animals got some historical music to listen to! Anyway, after a mere 20 minutes I had climbed the 1.1 mile trail (I must have really hustled….There were some spooky sounds out there!) and found myself on the summit, blown away by the splendor of the milky way arcing over the distant mountains. 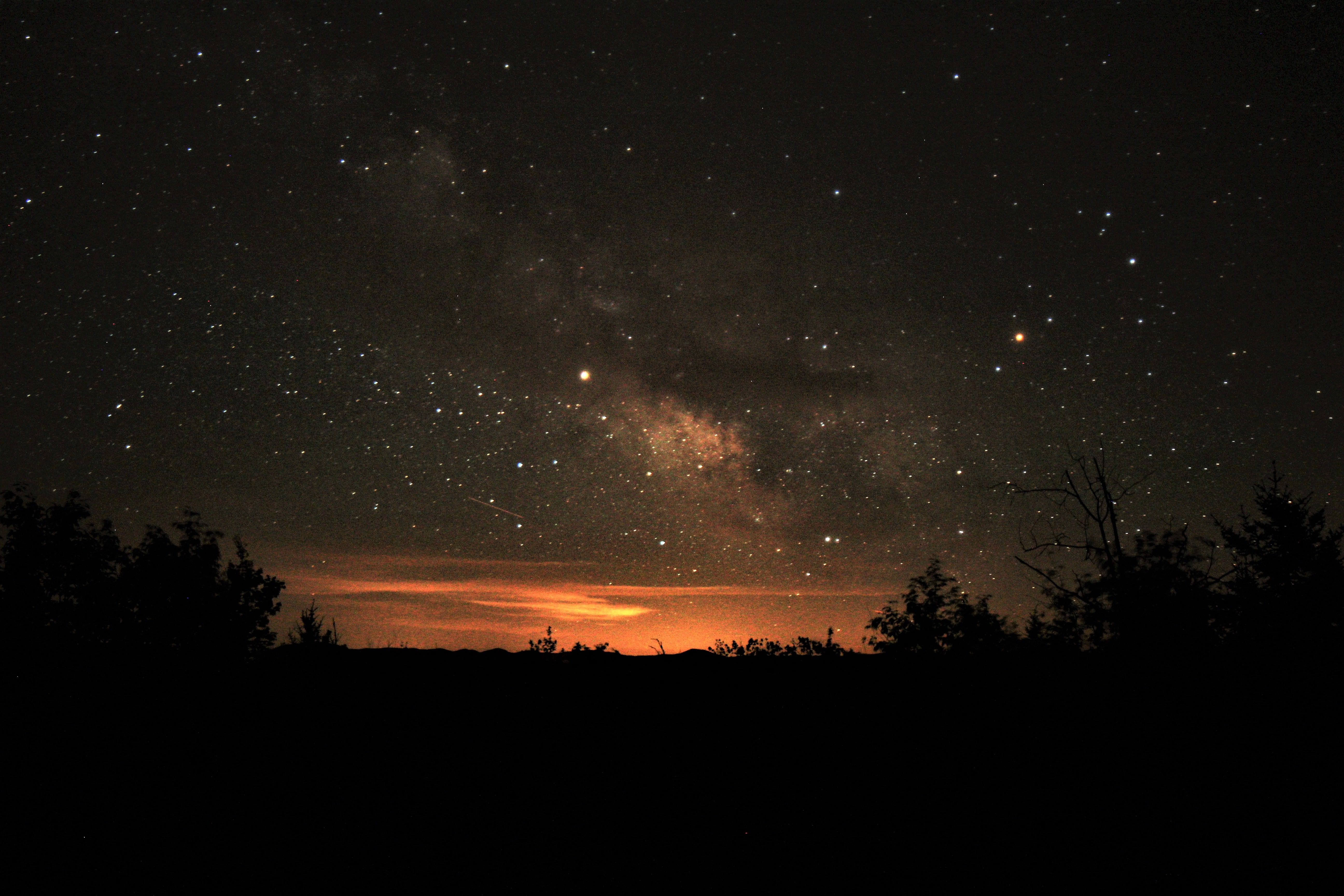 I dropped my pack and skedaddled further up the summit to get the full view of the luminous, shimmering night sky, and was greatly rewarded. 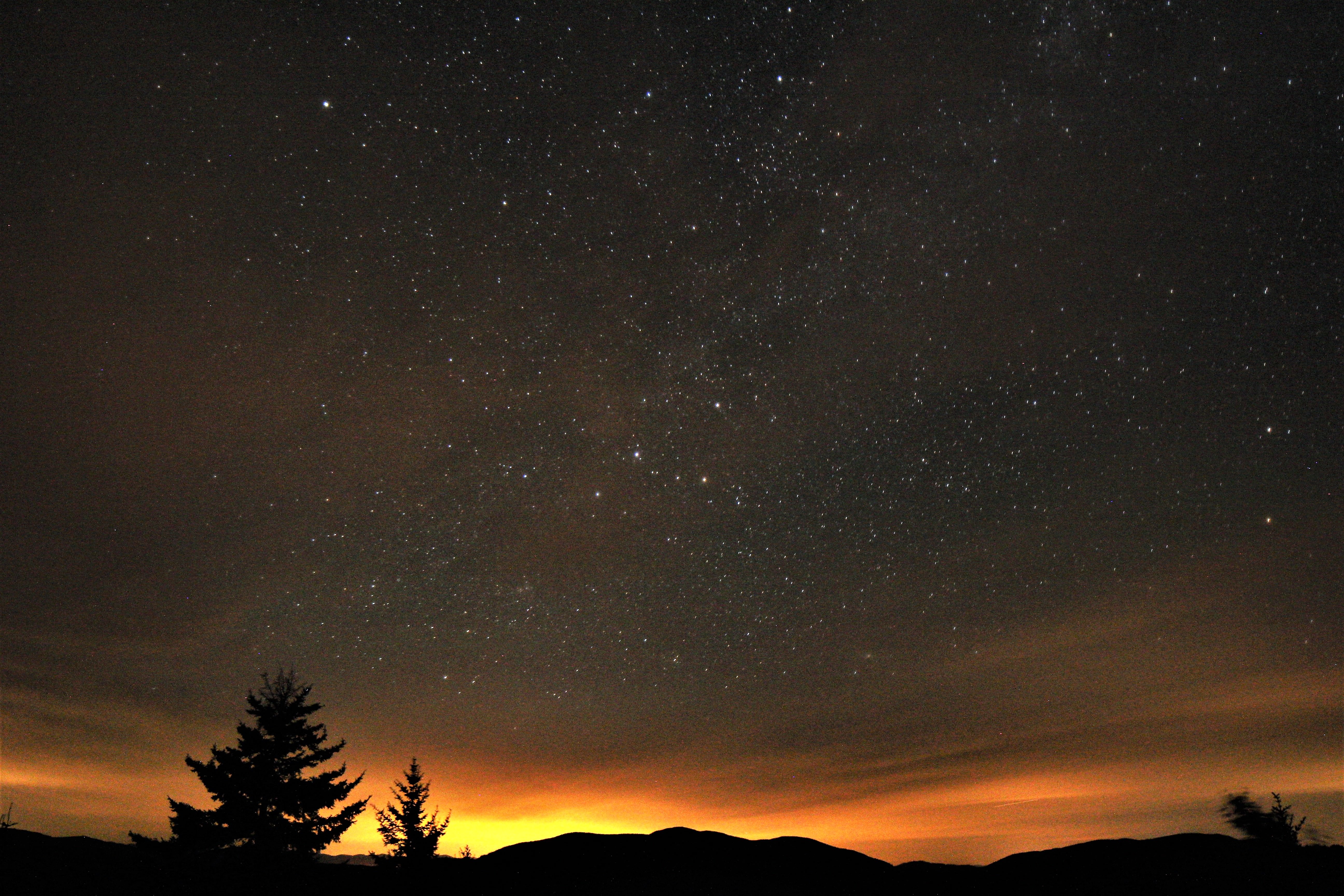 I had downloaded a cool app called Star Walk 2 which uses your location and phone orientation to show you what stars and constellations you’re looking at…I think I need to work on the calibration though because no matter where I pointed my phone, I was apparently looking at Jupiter.

After taking some shots (Canon Rebel T5 with a Rokinon f/2.8 14mm wide angle lens), I lay back to marvel at the sheer number of stars. Unfortunately, some cirrus clouds had swept in to obscure the view, so after about 45 minutes I decided to take my leave. 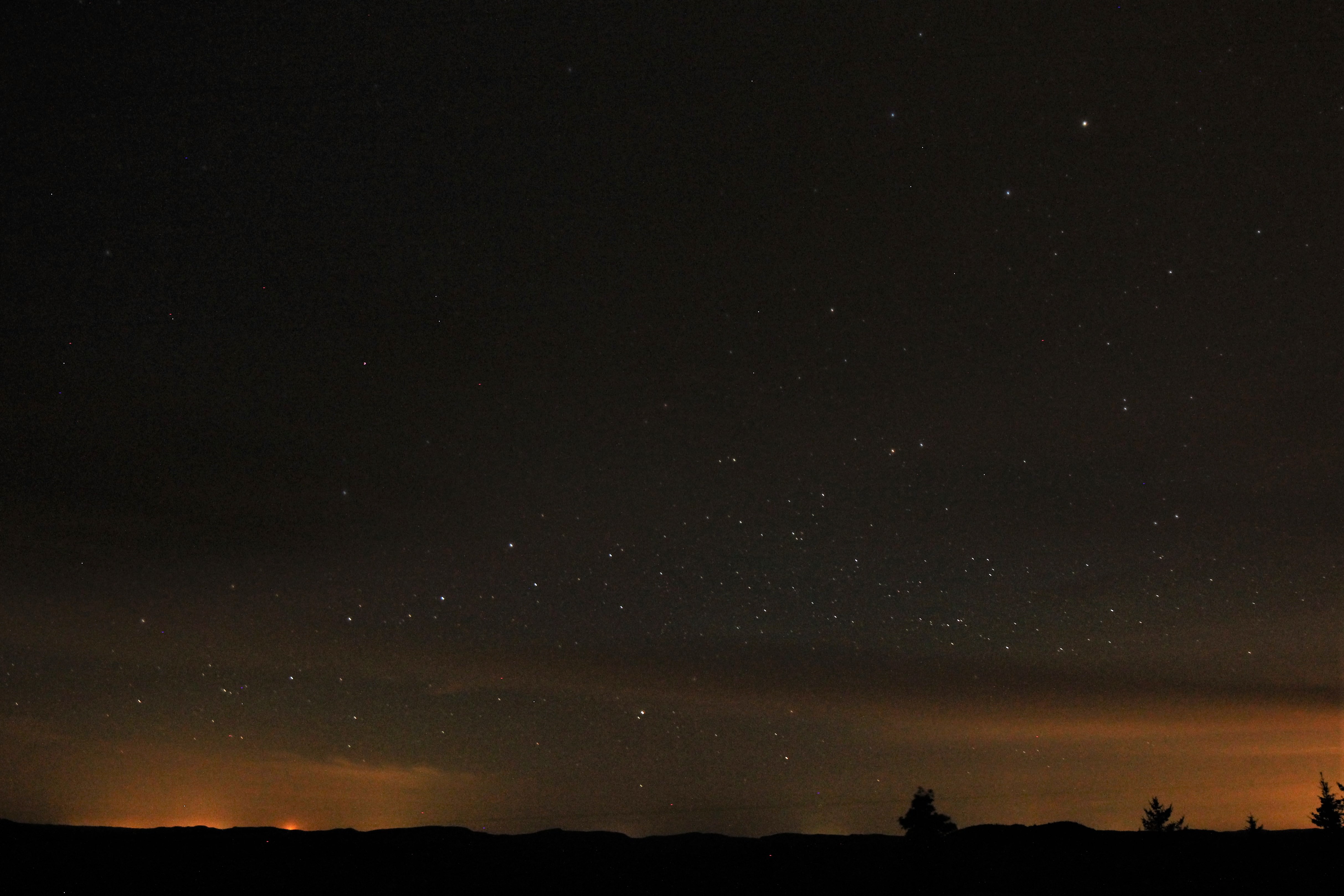 I was feeling pretty sure of myself on the hike down, until about 5 minutes in when I heard a huge CRASH across the trail in front of me and to the forest on my right. After the pounding in my ears from my adrenaline-pumped heart subsided, I realized it was a deer I must have frightened bounding off into the woods….So I resumed my whistling so as not to startle any other animals. So noble I am, thinking of the animals, because of course I wasn’t at all spooked by the incident! (heavy dose of sarcasm there, folks) After that it was easy going, and before I knew it my headlamp was illuminating the taillights of my car in the parking lot. As I walked out and gazed skyward, I saw that the clouds had dissipated during my trek down. 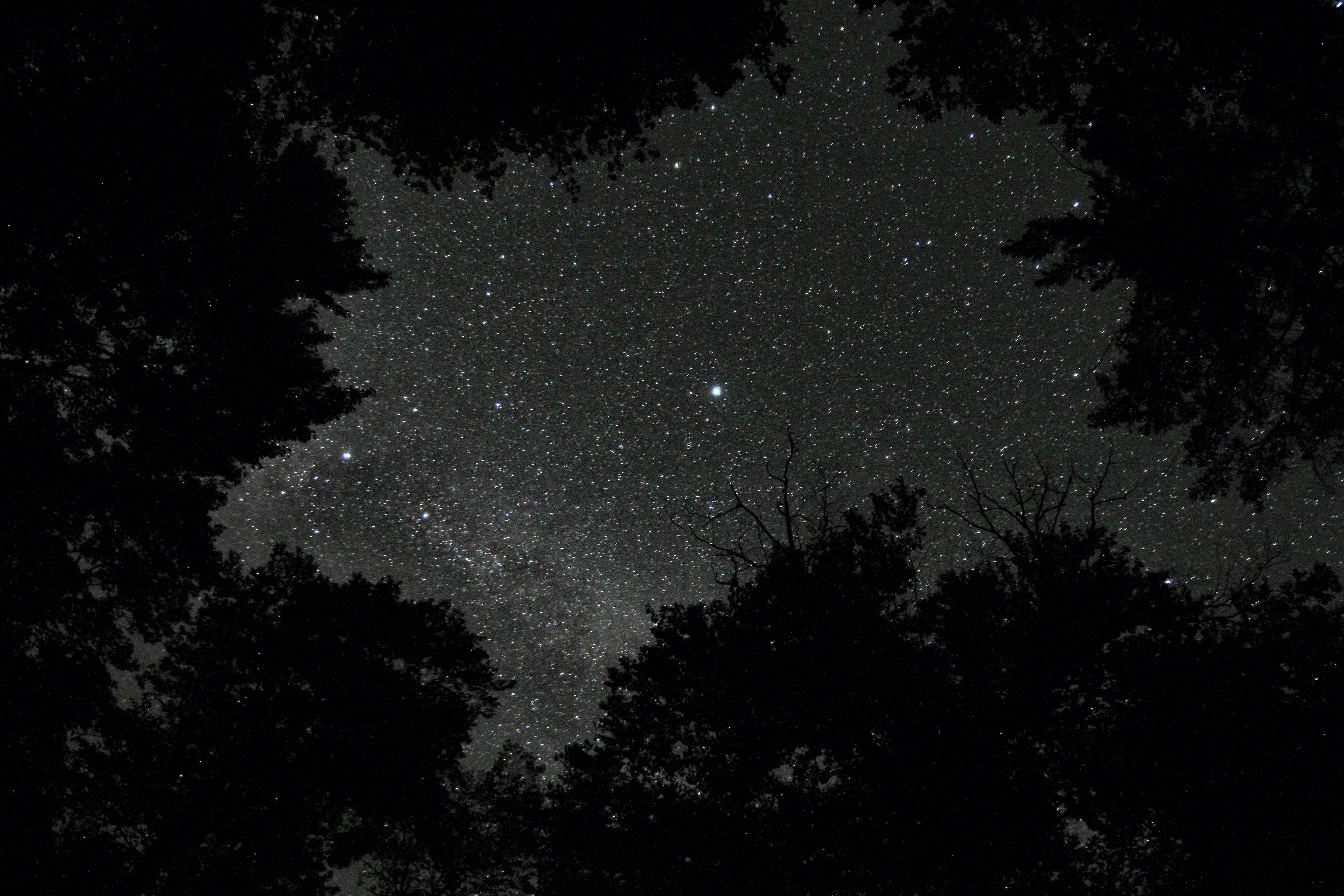 I cannot wait to get out and do this again! What an incredible experience. Happy trails!