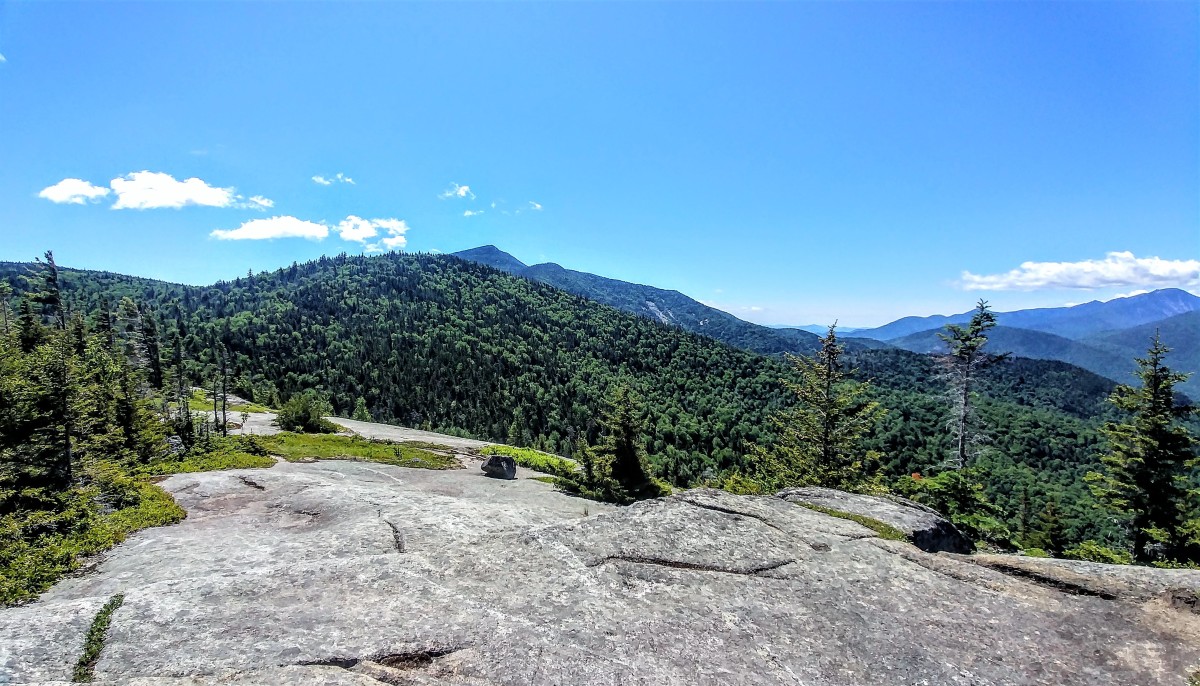 It’s been almost 1 year since I’ve been in the high peaks….The last real trip I had was Iroquois, Algonquin, and Wright, my absolute favorite trip to date, and my absence from the high peaks has been slowly eating away at my soul. A week after that trip, I suffered a mysterious injury to one of my knees, and haven’t been able to hike since. Lately I’ve been able to tackle small, easy mountains, so I made a deal with myself: If I could manage to climb Hopkins mountain without issue, then I would get myself back in the 46ers in 2 weeks. With that thought in mind, I set off determined to climb this peak. 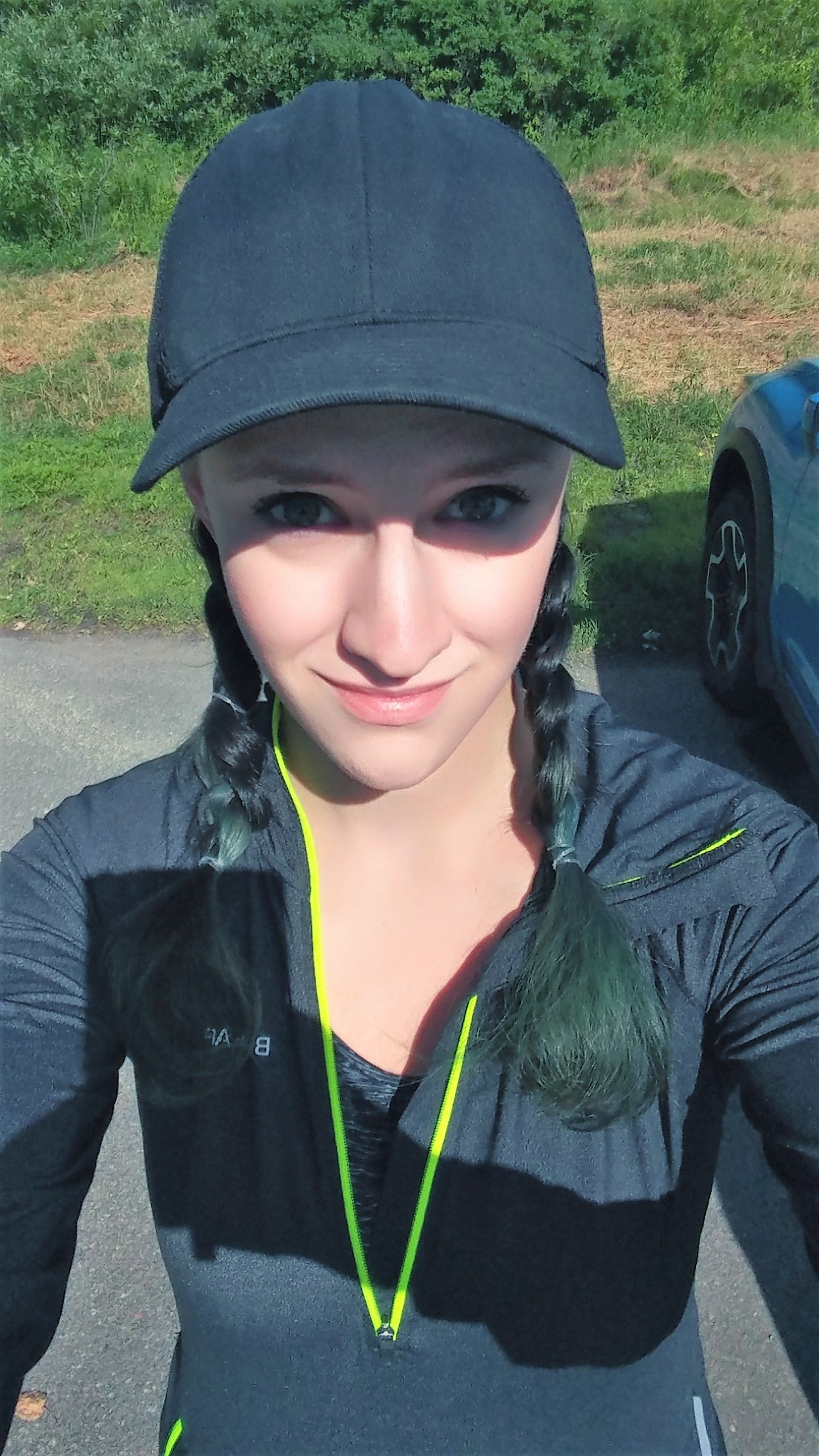 I arrived at the trailhead for Rooster Comb mountain on Rt. 73 at about 9am, crossed the road and headed away from Keene Valley toward Ranney Way. Ranney Way is a private road, hence parking at the nearby Rooster Comb lot. 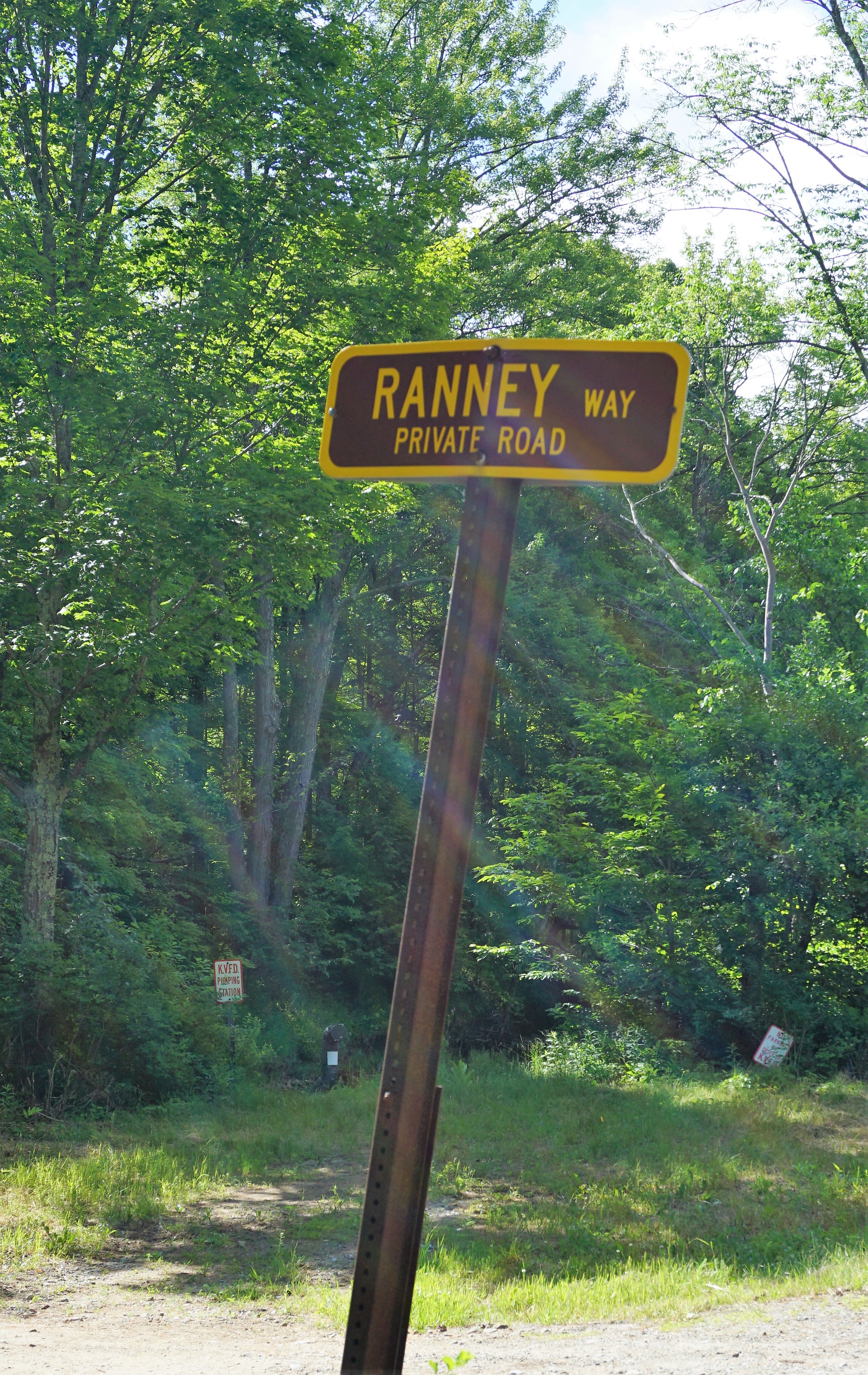 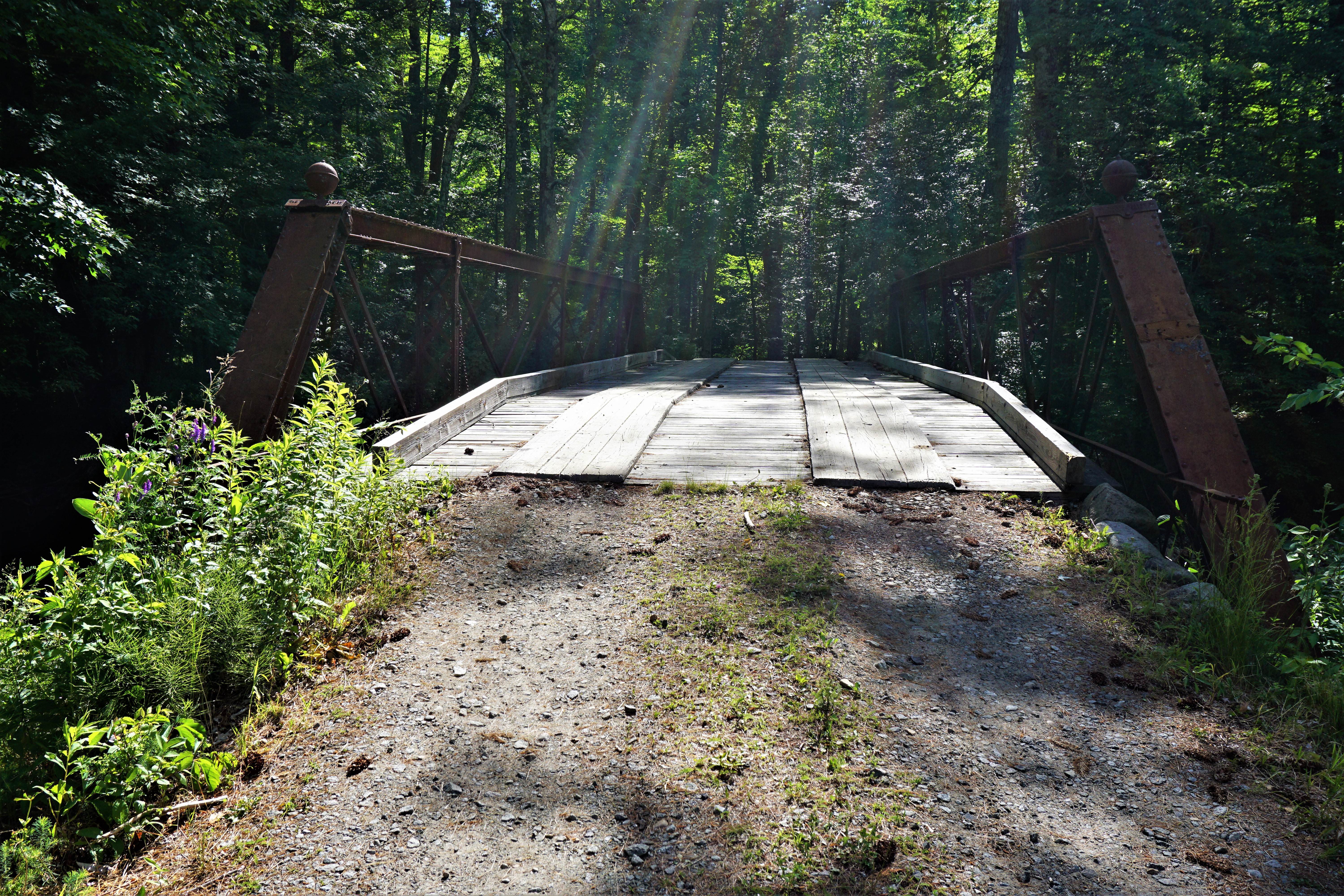 This is a nice little gravel road. I continued down this way for about 0.25 miles (continue straight when the road forks to the right) before coming to the trailhead. There’s no register for this trail, just this old sign. 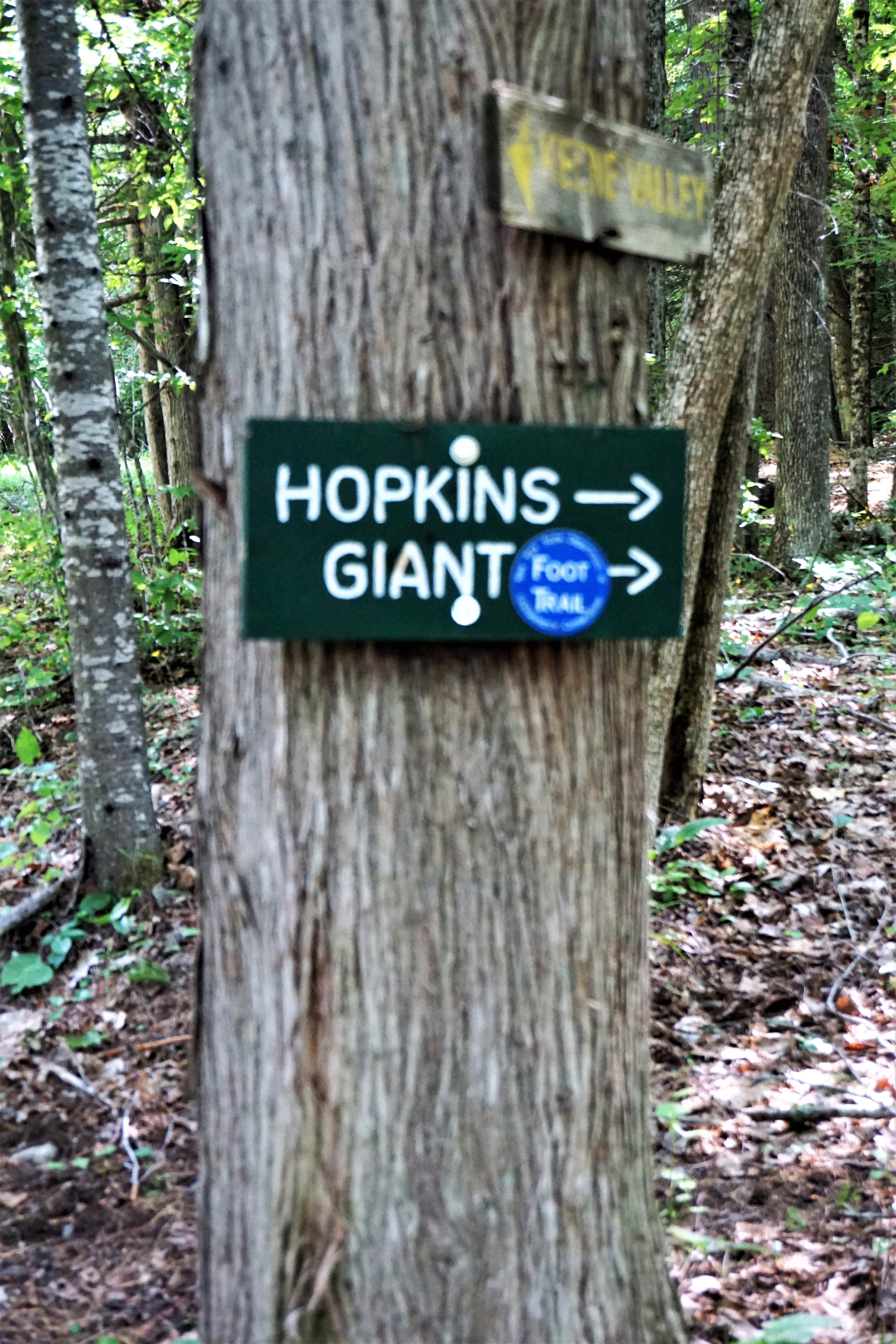 This wood was absolutely GORGEOUS. The trees towered tall and broad with no undergrowth beneath, with verdant rays of light filtering through a leafy canopy. Forests like these always make me feel safe and protected, and it’s so tempting to set up a hammock and lounge. Today however I was on a mission, so that would have to wait. 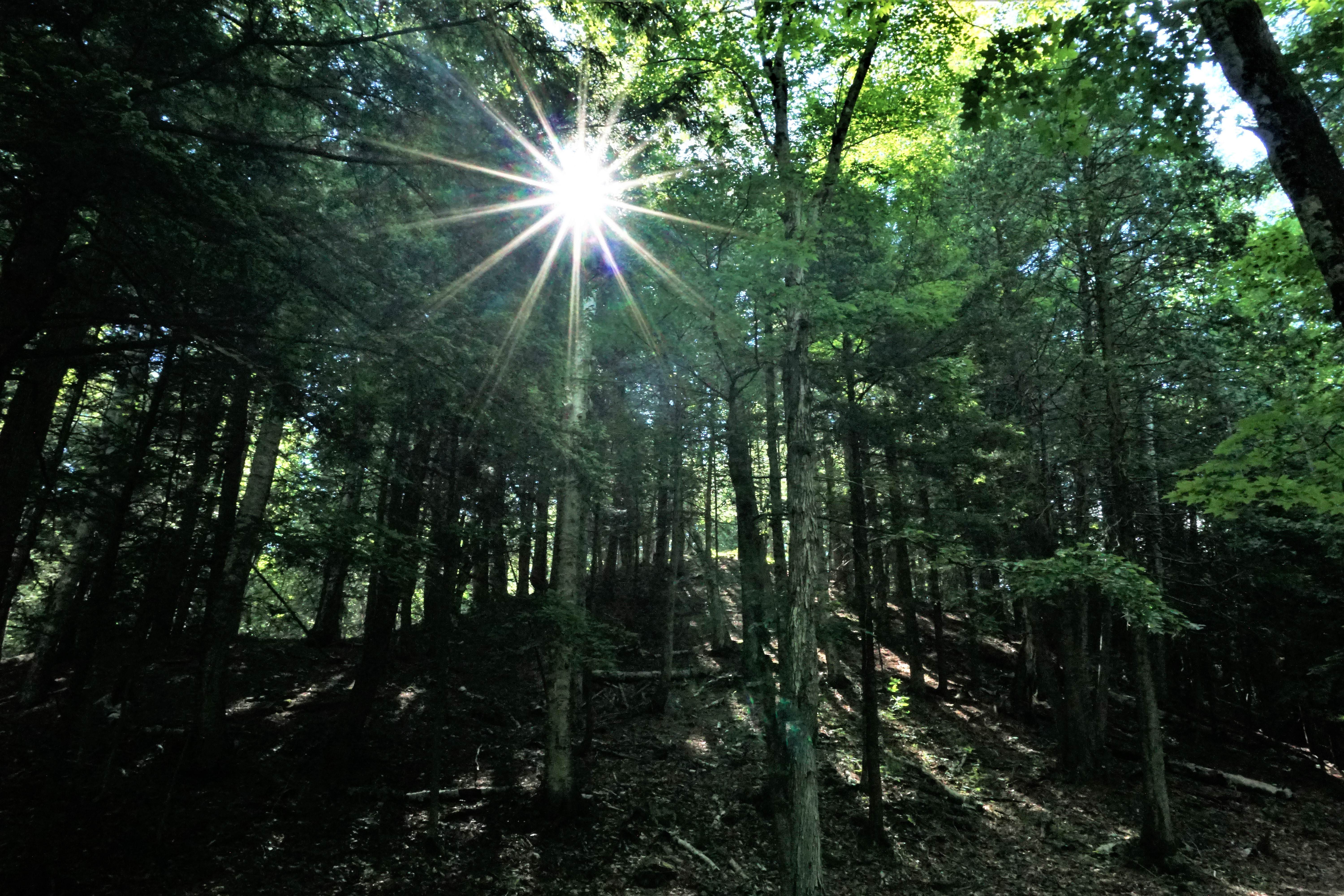 Much of the trail follows along the Hopkins Brook, providing a nice ambient sound of trickling water and numerous photo opportunities. Unfortunately it seems that many of the smaller off-shooting streams have dried up from lack of rain. At least it wasn’t muddy! 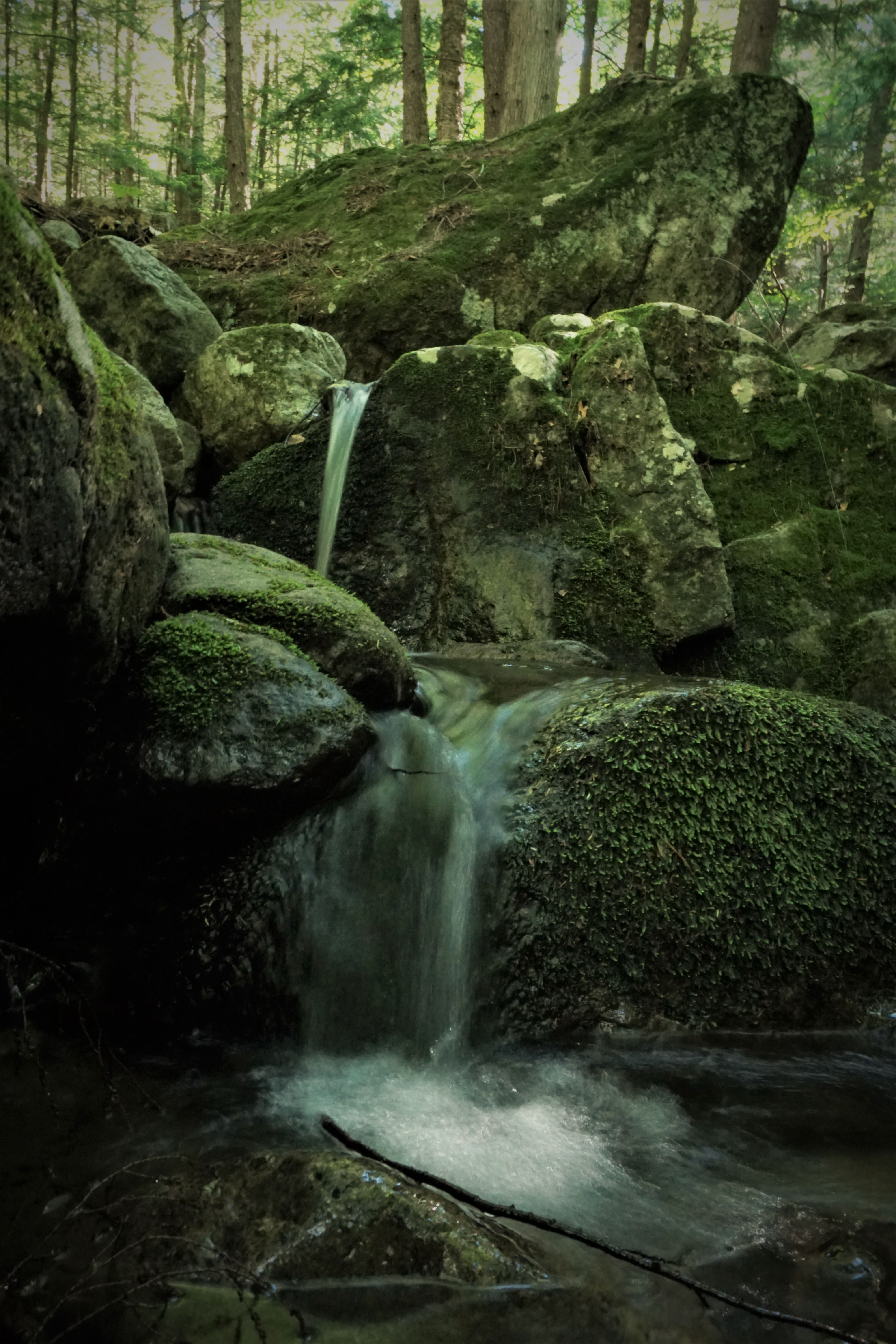 The path is soft and packed, climbing moderately and consistently through the pines with some steeper inclines interspersed. After about 1.8 miles I reached the intersection with the Mossey Cascade Trail and turned left to continue up to Hopkins Mountain. 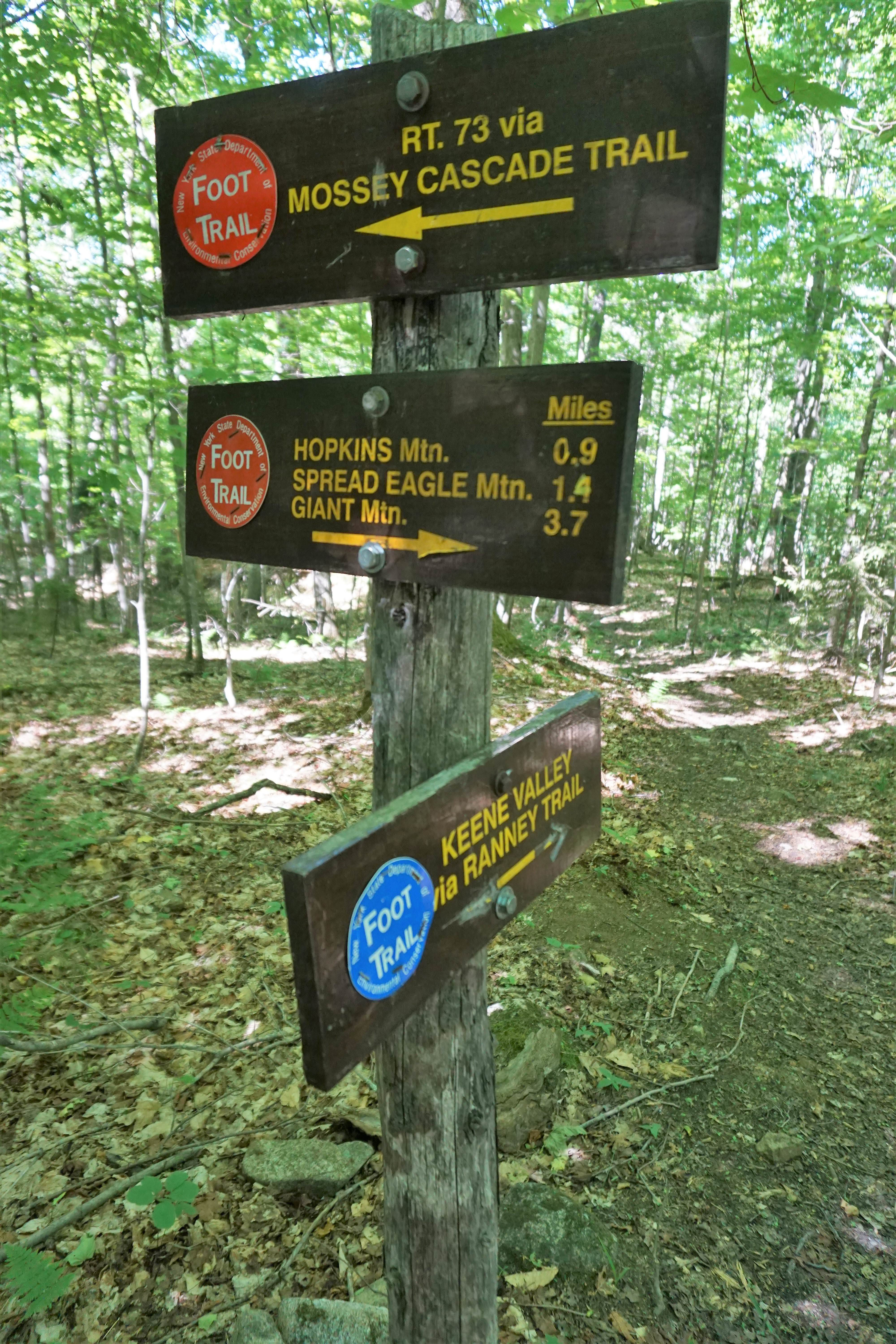 The going was a bit easier at this point, with some flat sections interspersed with the climbing. I continued to employ my technique of frequent stretching breaks to take care of my bad knee and hoped desperately that it would prove effective to abate the pain during descent. During one of these such breaks, I heard a very peculiar sound coming from the undergrowth to the right of the trail…It sounded like the most pitiful animal I’ve ever heard, accompanied by the rustling of leave as the critter scooted around through the brush. Recognizing the sound as something I heard while climbing Coney Mountain in the middle of the night (and thought it was a snake eating an animal???), I was extra curious to determine the source….It was a ruffed grouse hen! I had never seen one on a trail before, and it turns out the sounds she was making were alarm, distress, and distraction calls! The calls were probably because I scared the guacamole out of her, BUT HEY IT WAS COOL! I was too focused on observing the bird to even consider recording audio or visual, so here’s a link to a video from someone who didn’t totally drop the ball (like I did :P) showing exactly what it sounded like. 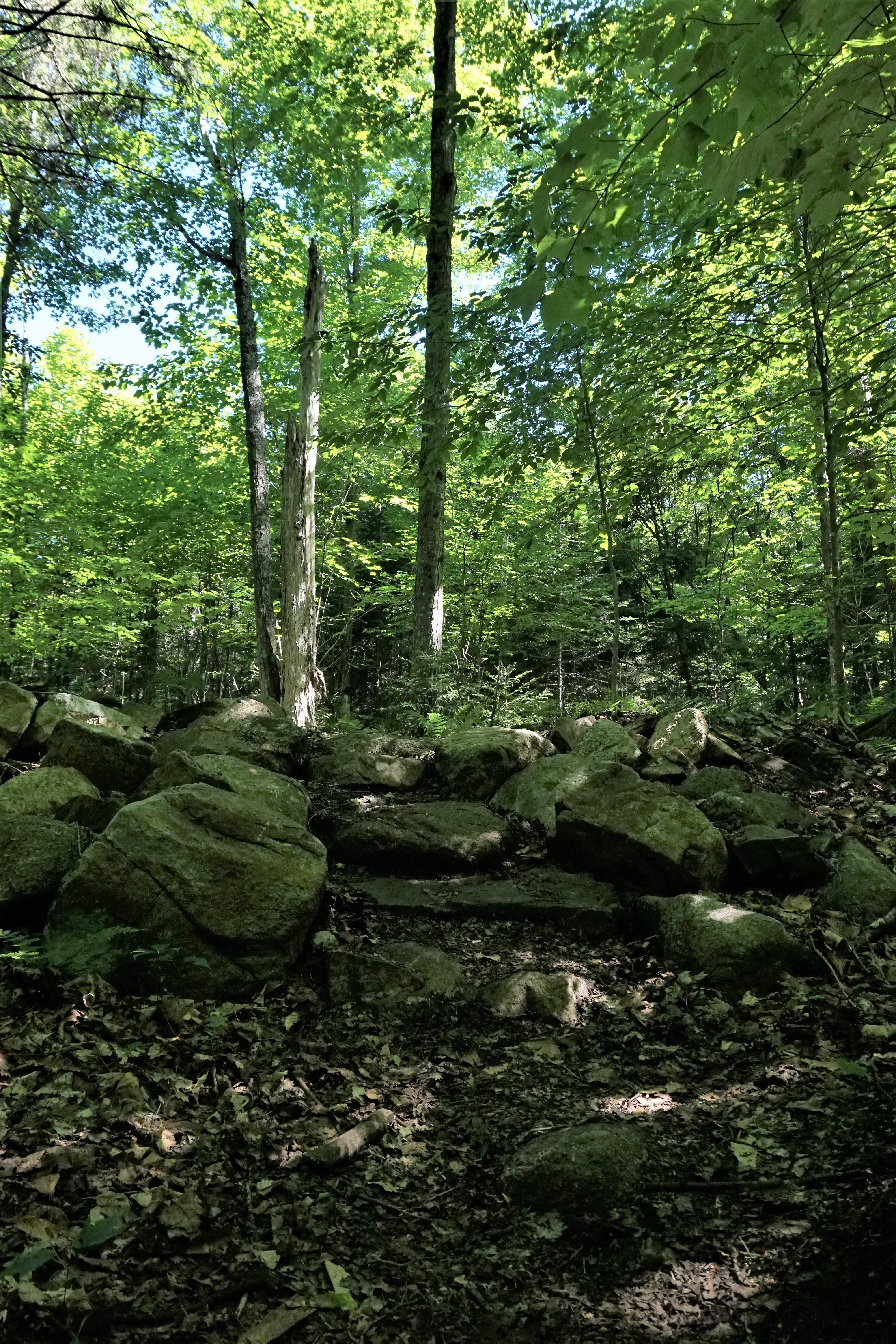 These trails continued together for about 0.7 miles before coming to the next junction. At this point the forest became much more lush, full of mossy rocks and ferns, and of course many many many spider webs, which my face  considerately caught for all those that would follow in my steps later in the day. Yep, that’s me, totally magnanimous… 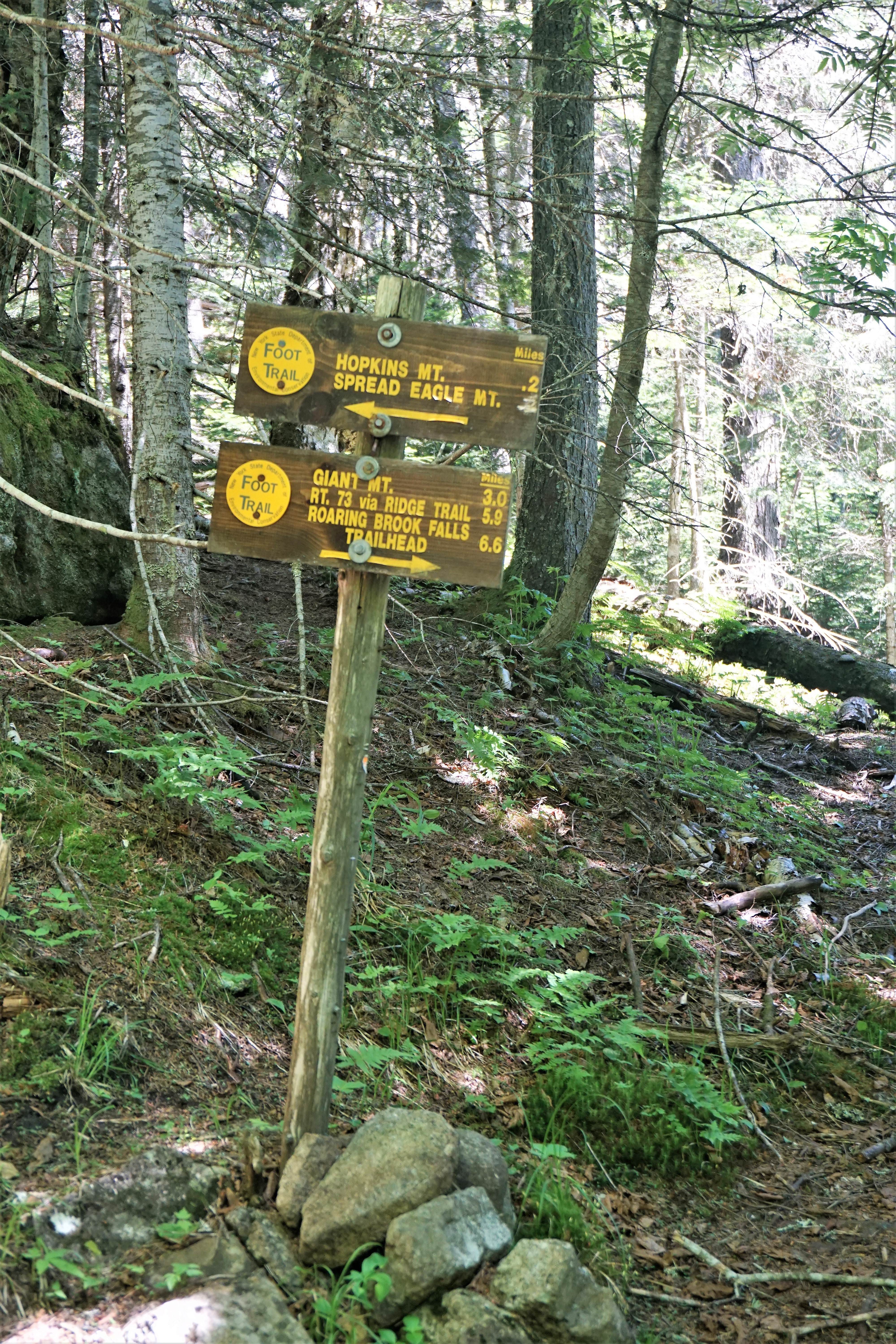 I always get really excited when I see that “0.2 miles to summit” sign…I know the climb is going to be steep, but knowing I’m so close puts a serious pep in my step and I fly right up the trail. This trail did not disappoint! Though not very long, this trail has over 2000′ of elevation gain in a little over 2 miles. It’s not as easy as it seems just looking at a map, which is why I chose it as my “test” to see if I’m capable of climbing high peaks again. 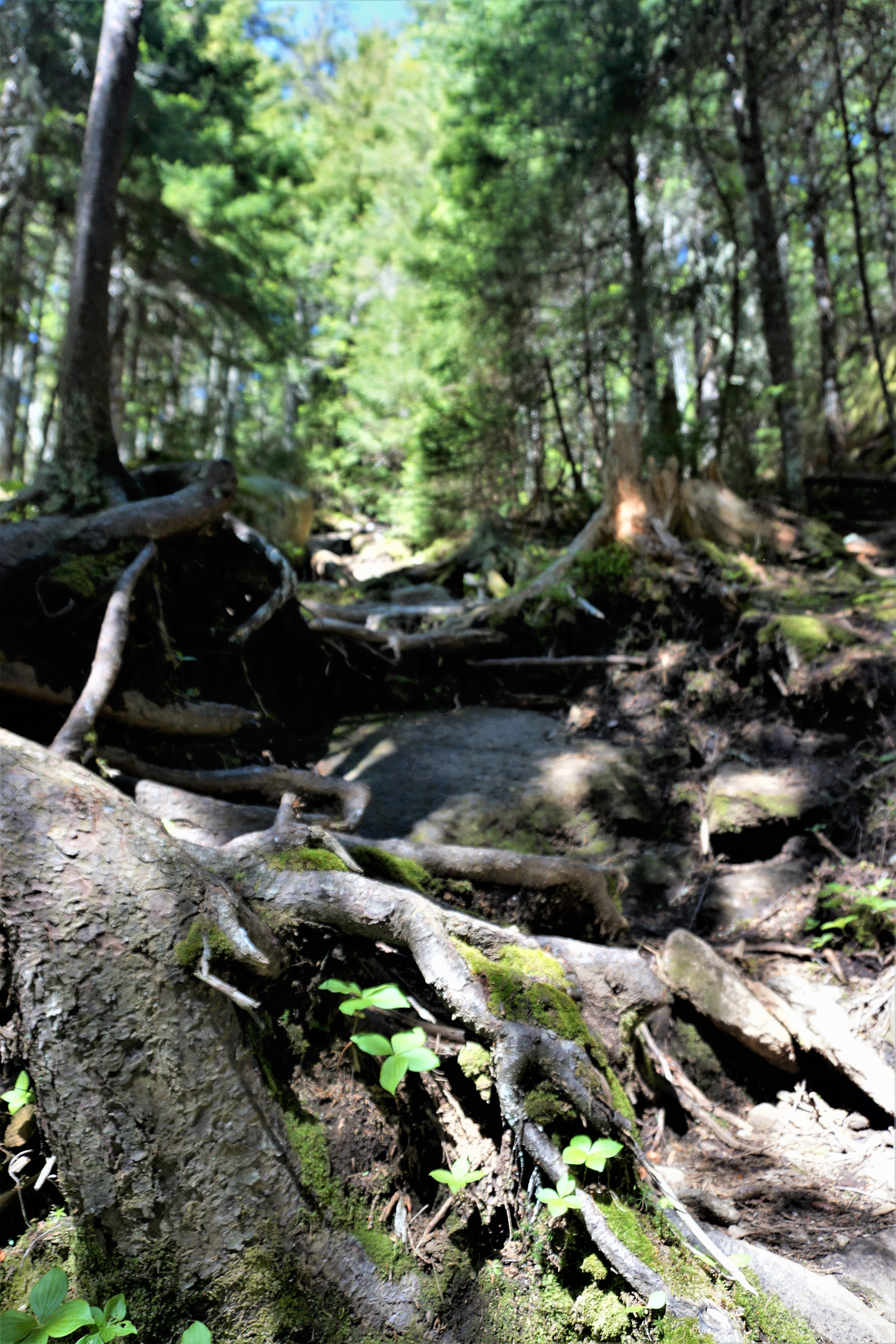 I was soon scrambling out on open rock faces at about 11am and I ran ahead to see this first view. 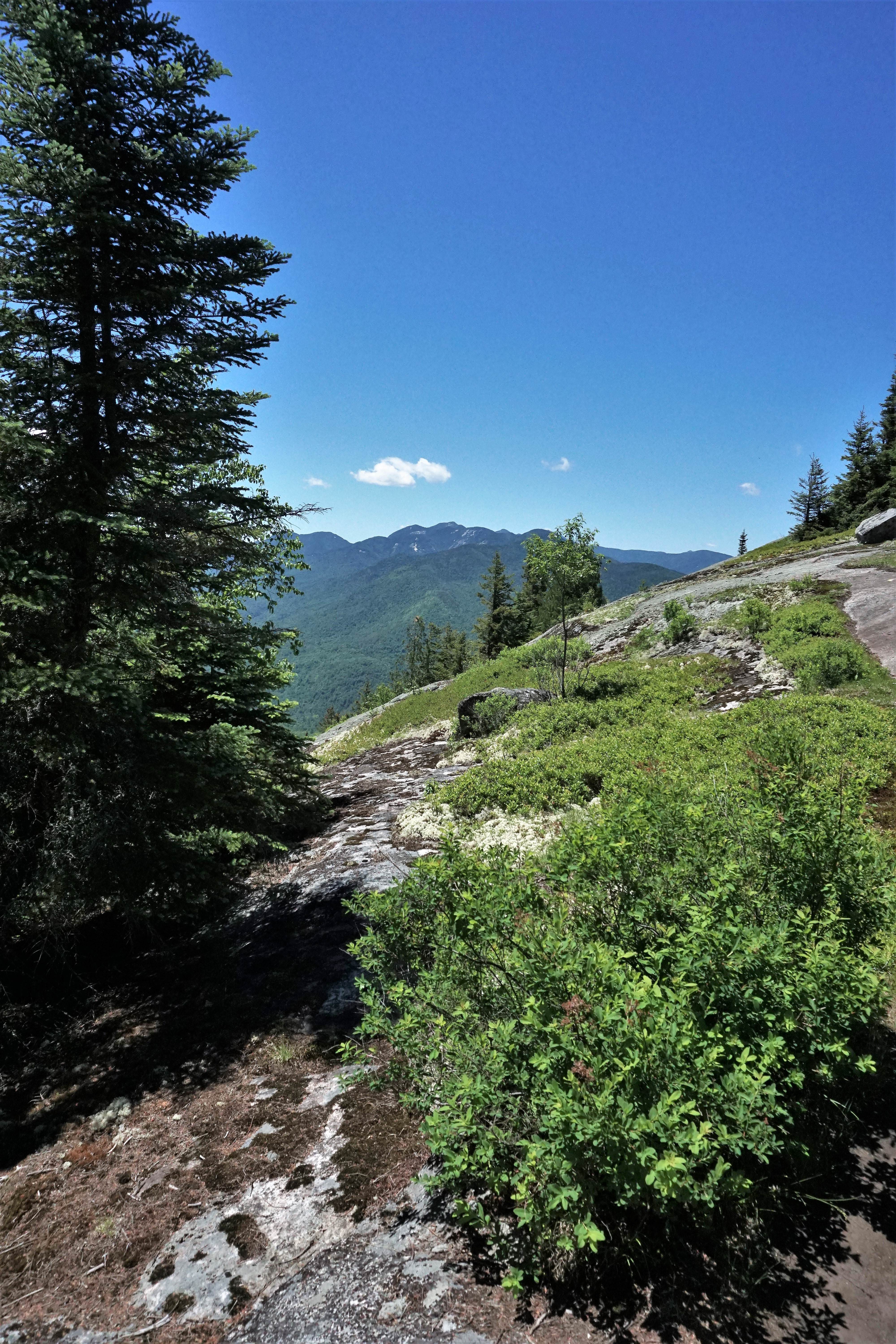 I won’t lie to you. I knew I had been really missing the high peaks, but I don’t think I realized just how much until I reached this point. My soul, my very essence, seemed to exhale a sigh of relief to finally be HOME. I’ve never felt to belong anywhere as strongly as I feel that in the high peaks of my beloved Adirondacks. There is an almost magnetic attraction to them…After all, home is where the heart is, right? Never in my life have I shed tears of happiness, but as I stood there gazing upon the vistas of the welcoming wilderness, I cried. And I couldn’t stop! Seriously, I’m so glad I had the peak to myself for a while because I had tears streaming down my face for a solid 30 minutes. The past year has been full of trials and tribulations, and the knowledge that I was physically unable to climb the 46ers had weighed on me with a blanket of depression, seemingly deepening with every passing day. Finding myself at the summit of beautiful Hopkins Mountain, sans knee pain, the realization that I would FINALLY be able to climb again seemed to whack me over the head. I’ve rarely been so happy in all my life….but I digress.

I climbed my way up to the summit and sat my emotional butt down to eat some lunch and bathe in the splendor of the mountains. 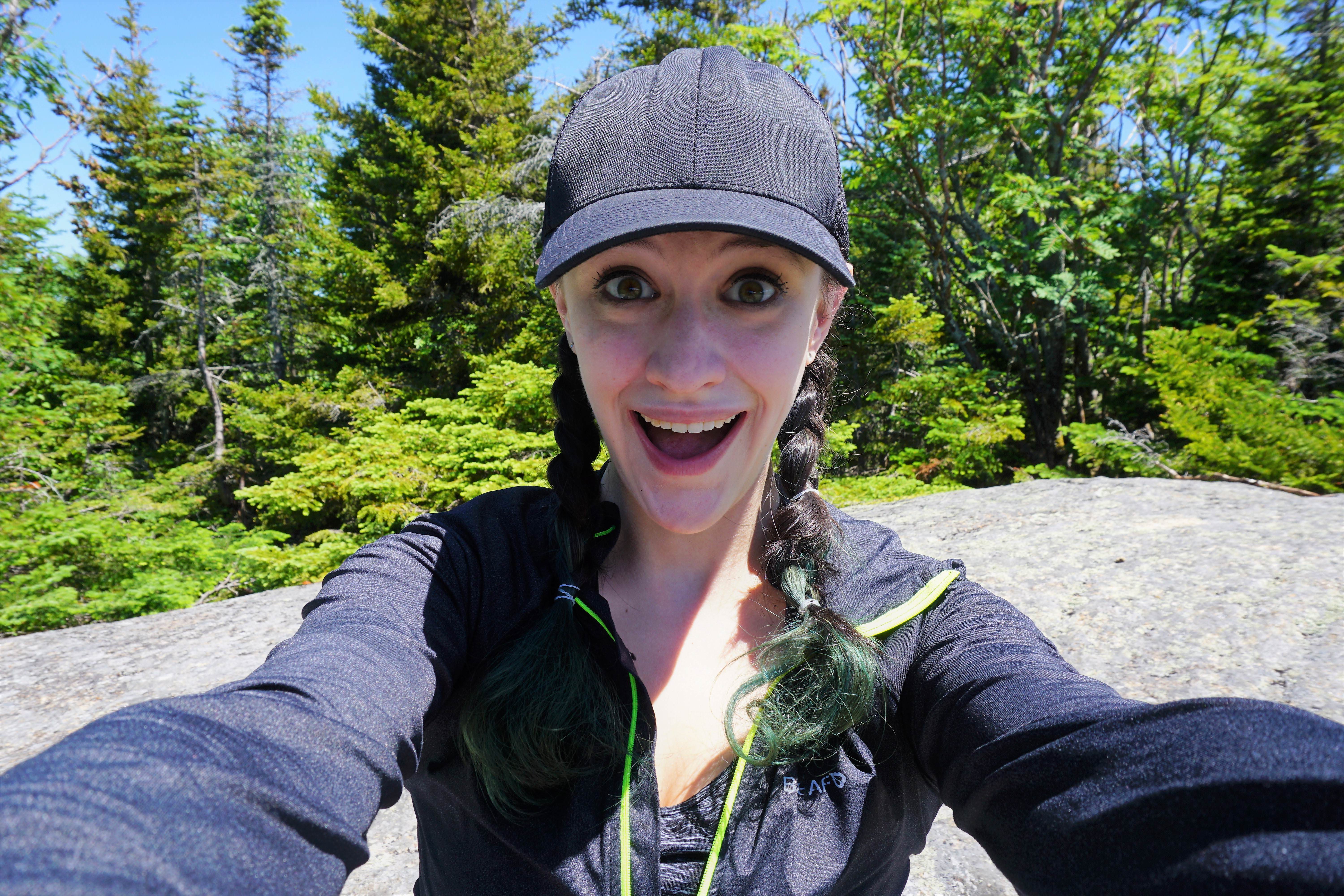 I stayed at the summit for about an hour and a half. A few people stopped by, but they didn’t linger, and I was thankful. I sat to stretch my legs and enjoy my victory snacks before standing up to head back down. 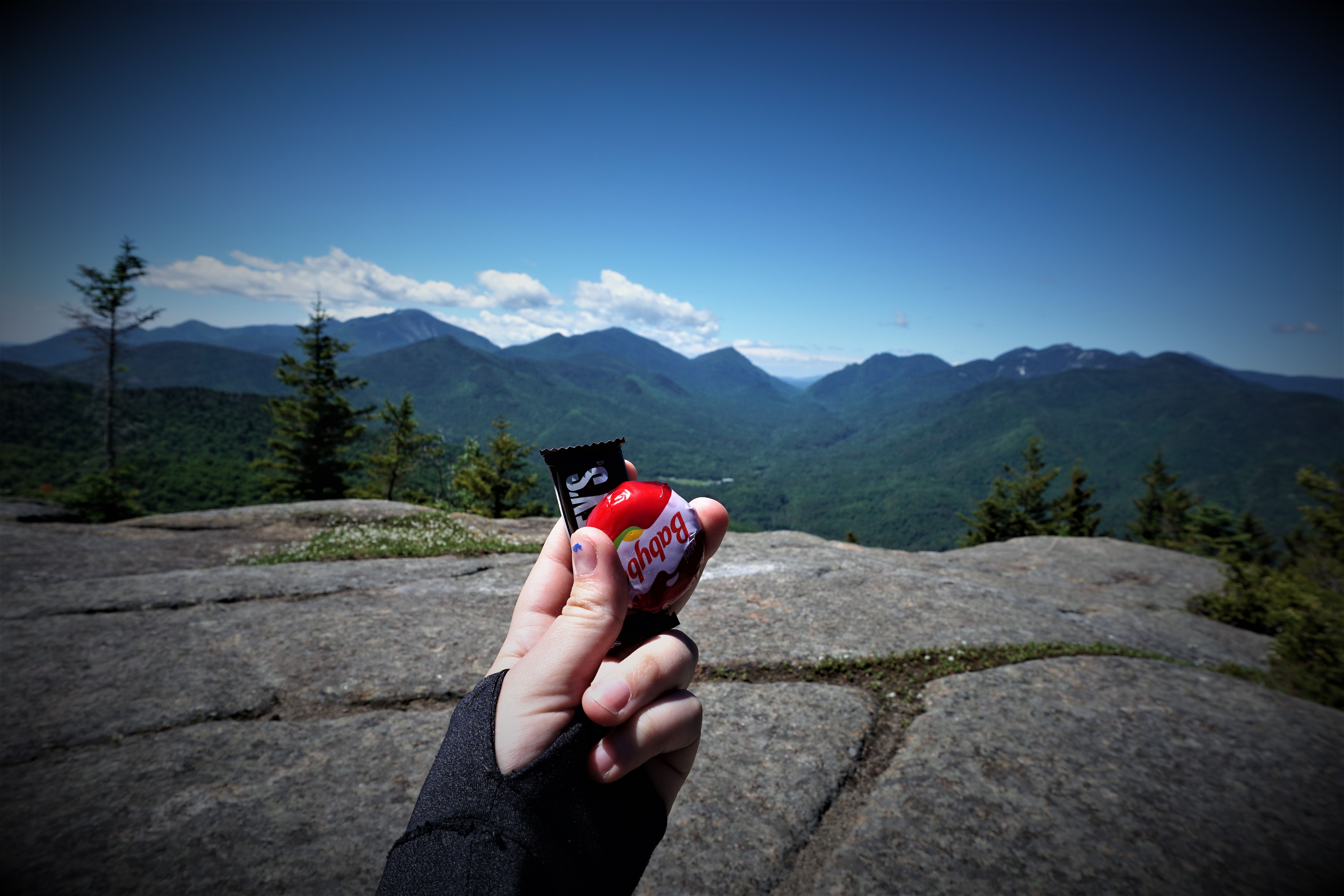 It took a solid 10 minutes for me to be able to drag myself away from the summit, but at 12:30pm I turned away for the last time and made my way back down the steep trail. 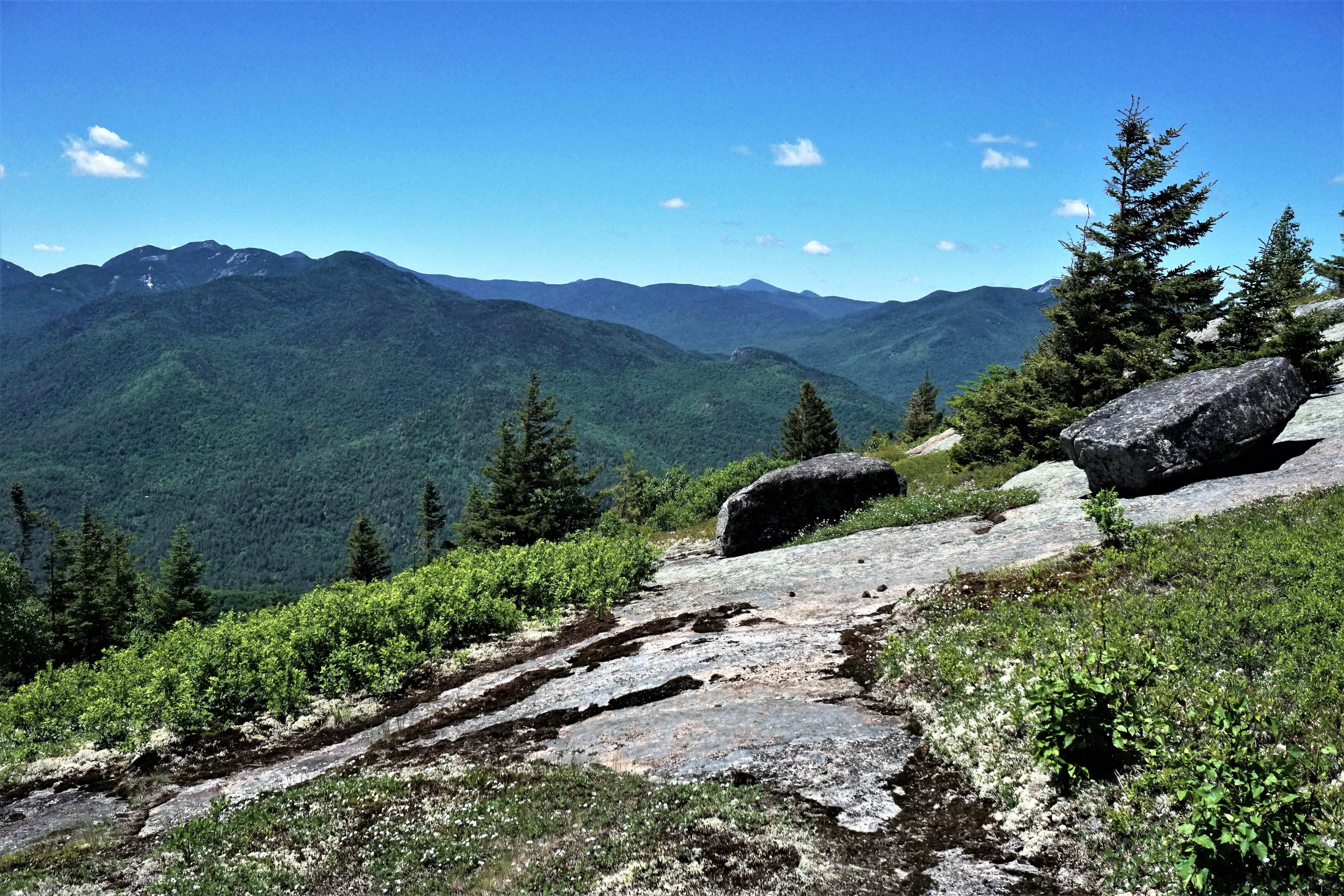 I was a bit nervous about impending knee pain, but after 30 minutes of very careful, measured steps and an agonizingly slow pace, I relaxed a bit, realizing that knee pain would not plague me on this perfect day. 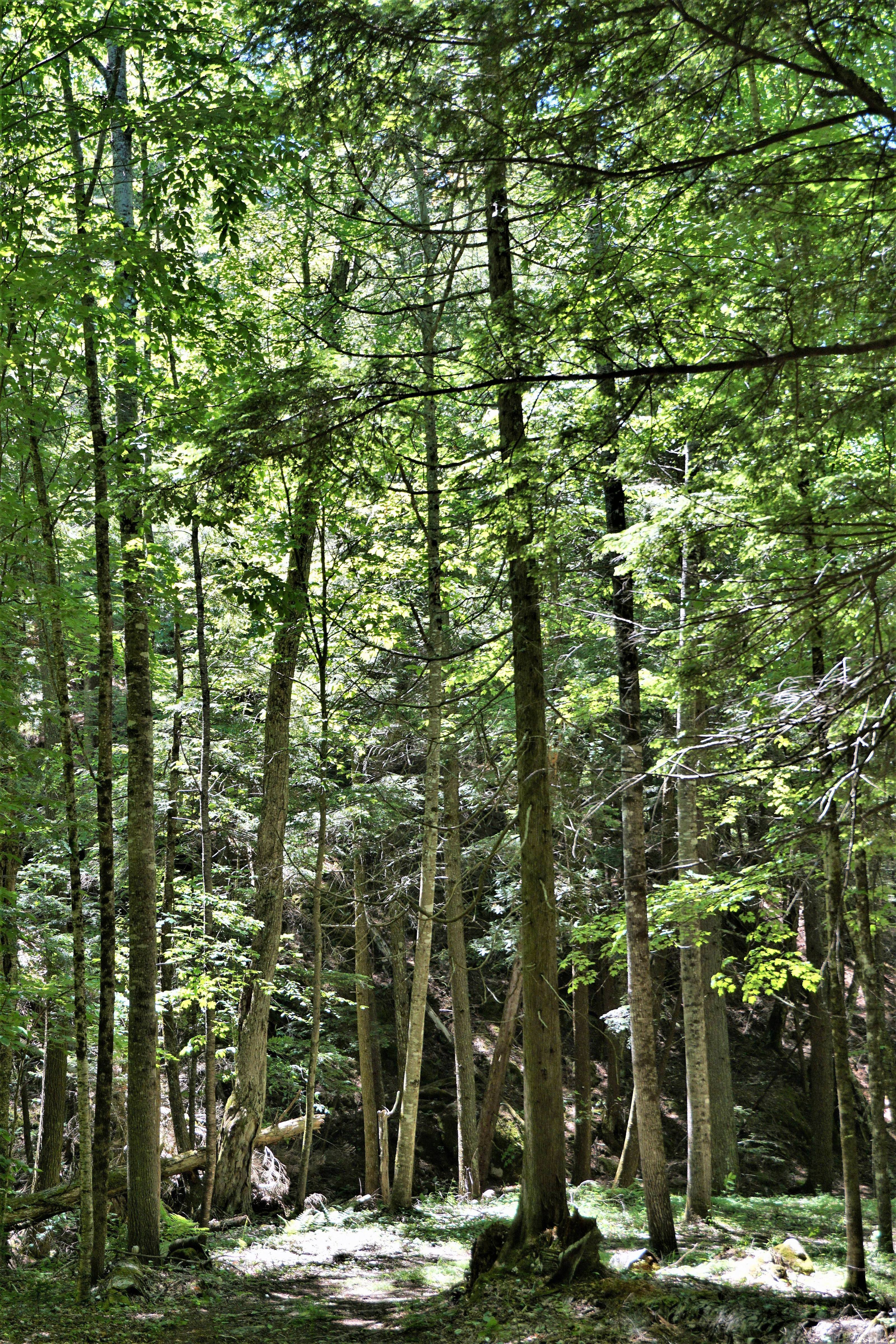 A mere 1:15 after leaving the summit and I had arrived back at the Ranney Way road. 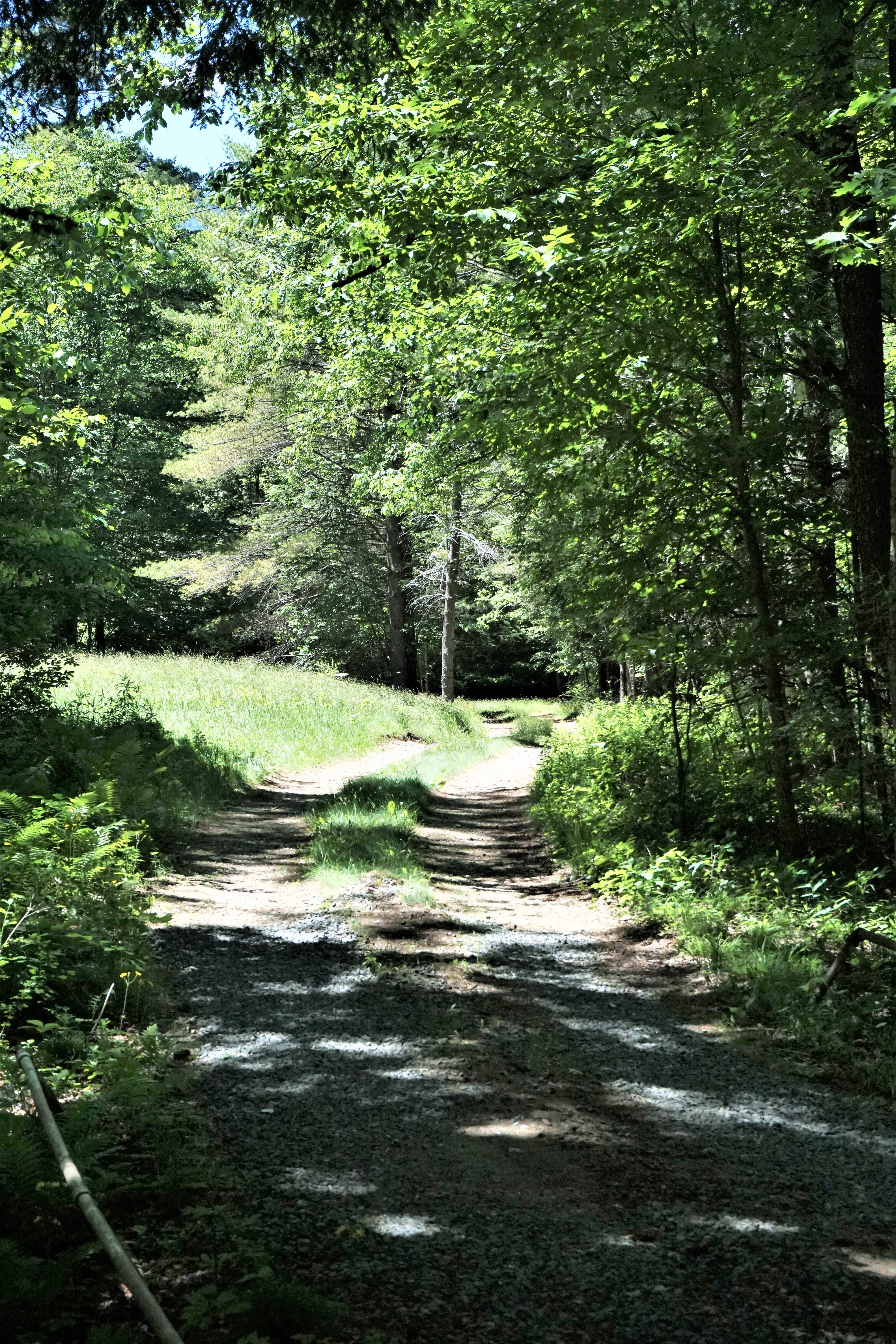 Another short 0.25 miles and I was back at my car, taking my leaving photo. This trail, though relatively short, is an absolute joy. Beautiful forest, just-difficult-enough grade, and stunning summit views. Having successfully completed this trek, I can now confidently say to expect a new trip report from the high peaks in the next 2 weeks! 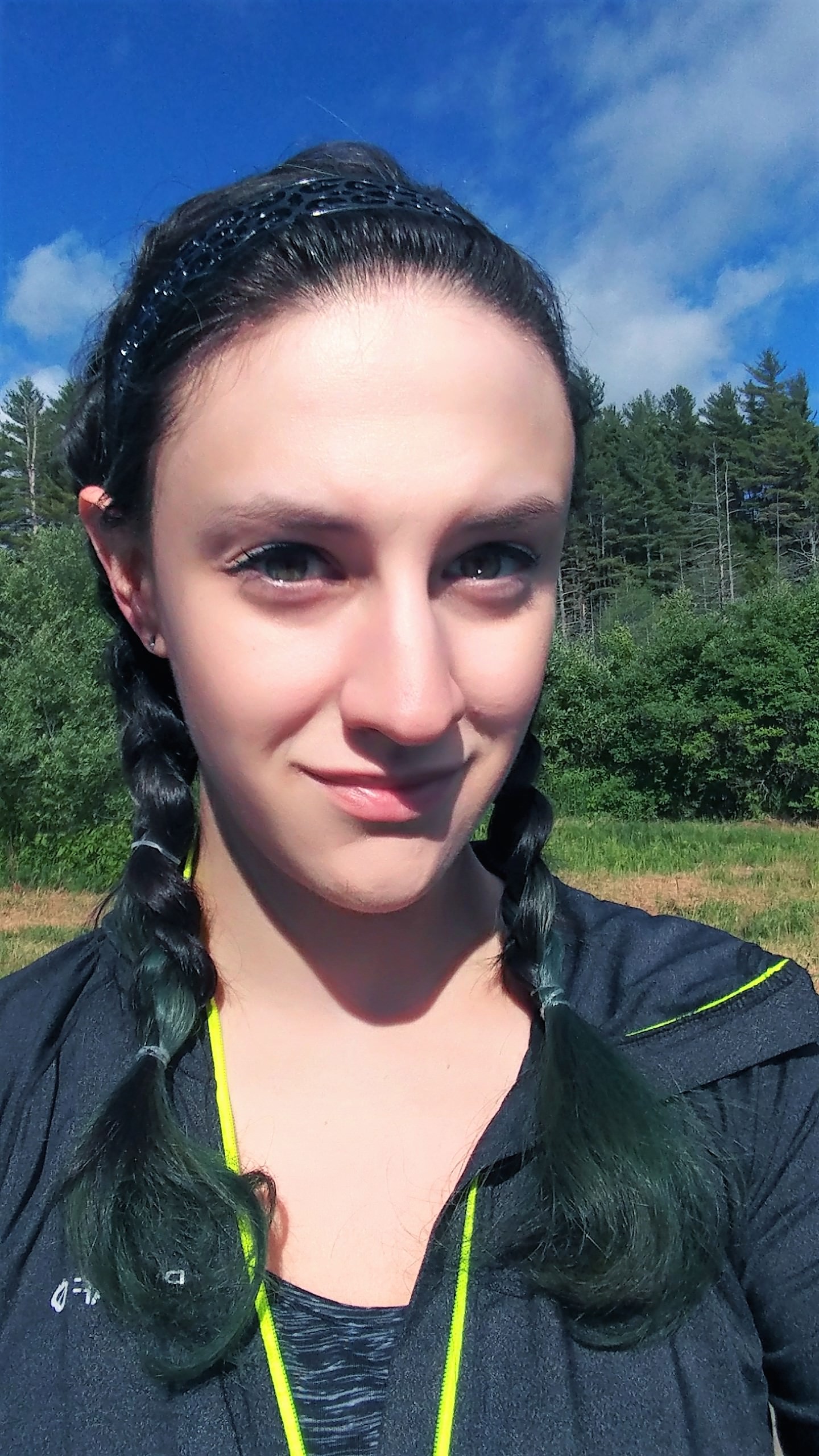 One thought on “Hopkins Mountain”