I’m not sure if it’s because my workload this week had been lighter, leaving my mind plenty of time to wander, or whether I was just well overdue for a hike, but I hadn’t been able to focus at work (which is very unlike me!) and found myself daydreaming about hiking. So I’d asked if I could take off early to go on an emergency hike, and that’s exactly what I did! I left home at about 2pm and made it to the trailhead for Ampersand Mountain at 5pm. (Note that the parking lot is on the opposite side of the street from the trailhead.)

I didn’t make it more than 5 minutes down the trail before I had to lower my head net and apply some serious deet to keep the flies and mosquitoes at bay. The forest was beautiful though, green and full of life, and the trail started out flat and easy. 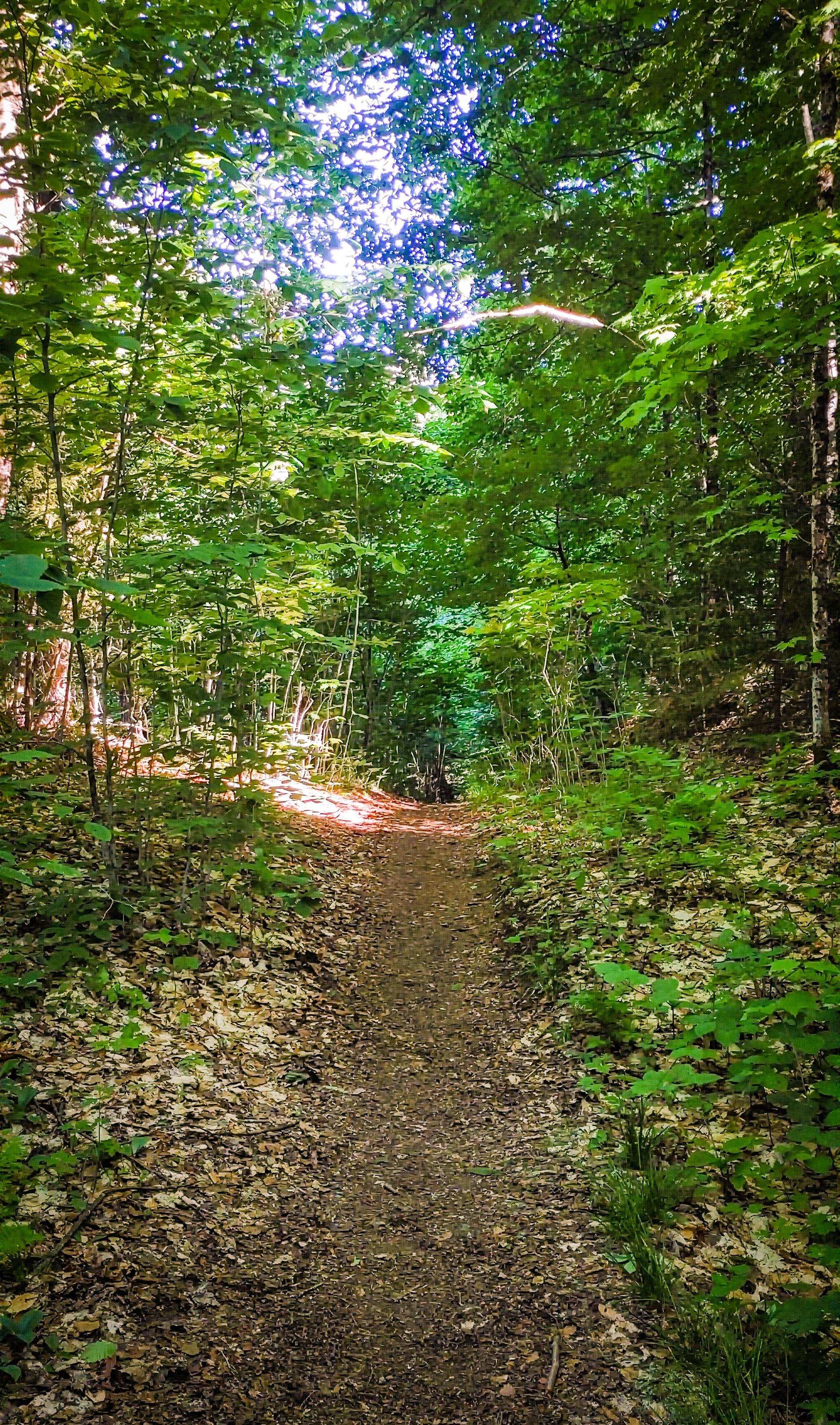 I plodded along and after another few minutes came to a sweet little babbling stream. 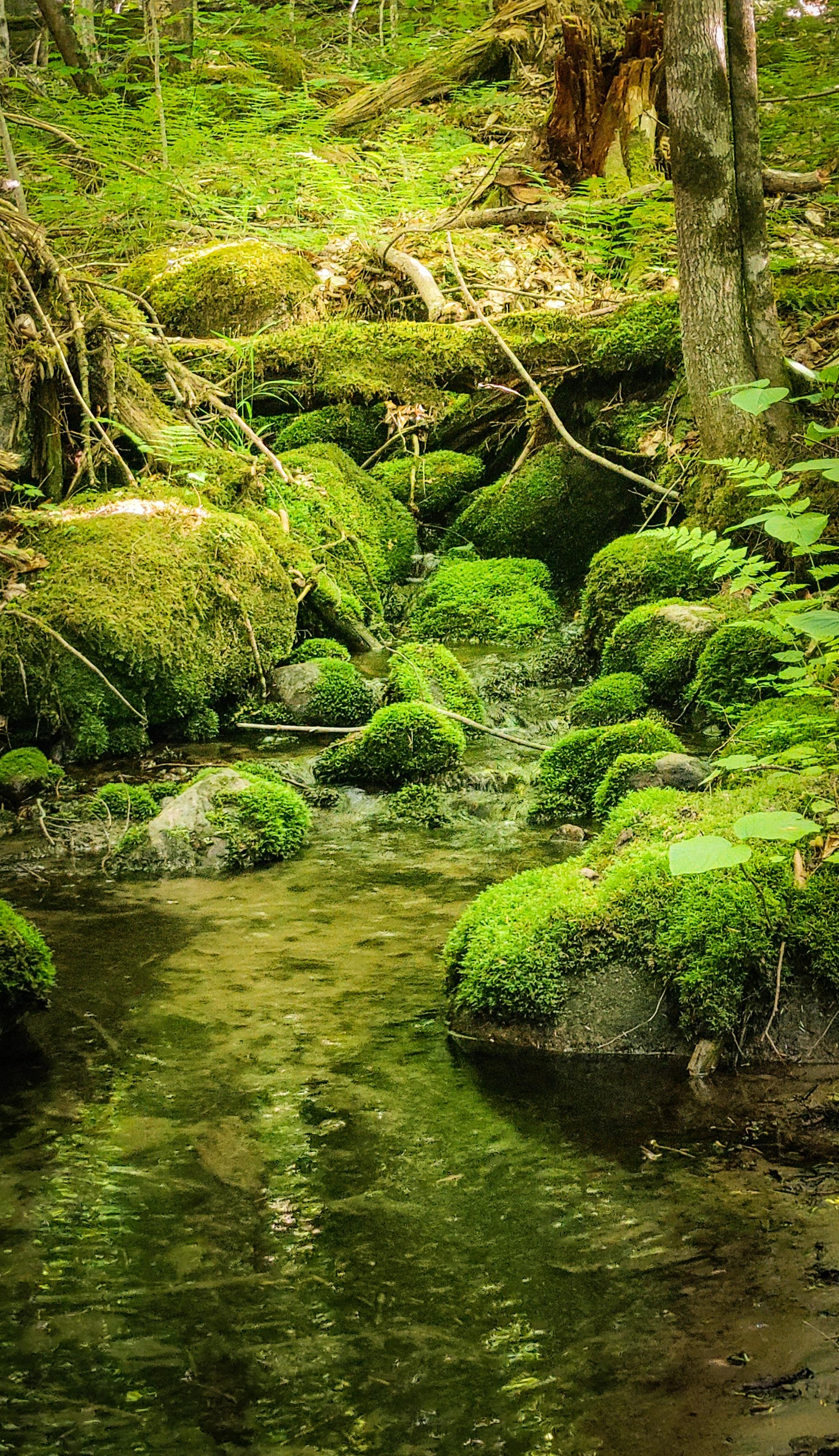 As I was deciding which trail to go to for my emergency hike, I thought about this mountain because though I’d done it before, I hardly recalled anything about the trail. Even my trip report from the first time was sparse and lacking any real detail about the trail. And there’s a reason for that – I’d gone with Juno in the spring the first time and – like a real rookie – didn’t bring my microspikes….So it was real fun when we got to the upper third of the mountain and the trail was still coated in a thick layer of ice! This time we had no such issues, however I did completely forget not to underestimate this mountain.

The first half-mile is deceptively smooth and flat, but gradually the trail became rockier and rockier, steeper and steeper. 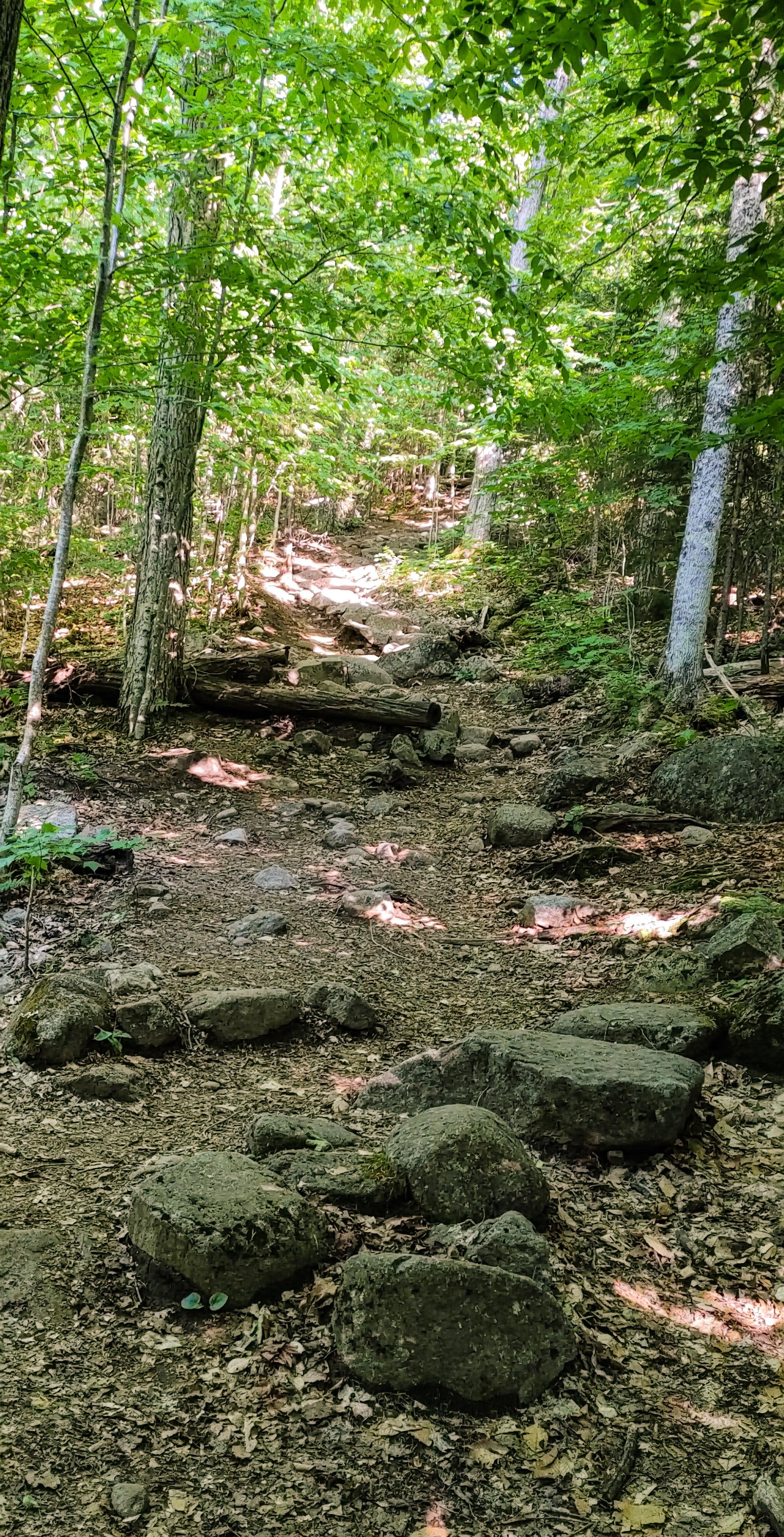 I only crossed paths with a handful of people coming down while I climbed, so I was hopeful that I’d have the summit to myself, if I ever made it there! The trail really is more difficult than it seems as it just keeps climbing and climbing with no flat or downhill sections on the way up. Each time I reached the top of a steep portion I’d think “Alright, I’ve got to be getting close” just to turn a corner and see a steeper section further ahead! At some point, after delaying and delaying stopping for a quick bite to eat in hopes of just stopping once I was at the summit, I had to admit defeat and perch on a nice rock to have a snack.

Now over the last few months I’ve had some monumental discoveries with my health. For the last 10 years I’ve been pushing and pushing to get doctors to take me seriously for a whole range of medical issues, including – most irritatingly – intense pain and stiffness in my joints when I hike. FINALLY I have been diagnosed with hypermobile Ehlers Danlos Syndrome – a genetic disease that causes my body not to process collagen correctly. This means that my connective tissue, including tendons and ligaments, is too stretchy and acts kind of like old stretched-out rubber bands. Since my ligaments aren’t doing a good job holding my joints together, my muscles have taken up that job! Which is fine as long as I stay fit, but now I have to learn how to balance my muscles. So, long story short, this hike was actually a bit of physical therapy for me to practice some techniques that I was given to make sure that my muscles are supporting my joints evenly. That means learning how to engage my core and glutes rather than my quads when climbing up, and engaging the inner quad rather than the outer quad when climbing down. It might seem simple, but for me right now it means having to think consciously about EVERY SINGLE STEP that I take!

For all these reasons, my climb up was taking quite a long time, so I was really excited to see this big rock after climbing another steep section, thinking maybe it was the summit???

Nope. Not the summit. But I could practically smell how close I was! The trail leveled off a bit and led me through some interesting rock formations before going slightly downhill again.

And sure enough, 2 hours after starting from the trailhead, I had my first glimpse of the summit!

I scampered to the top to take in the 360 panorama of the lakes and mountains surrounding me. 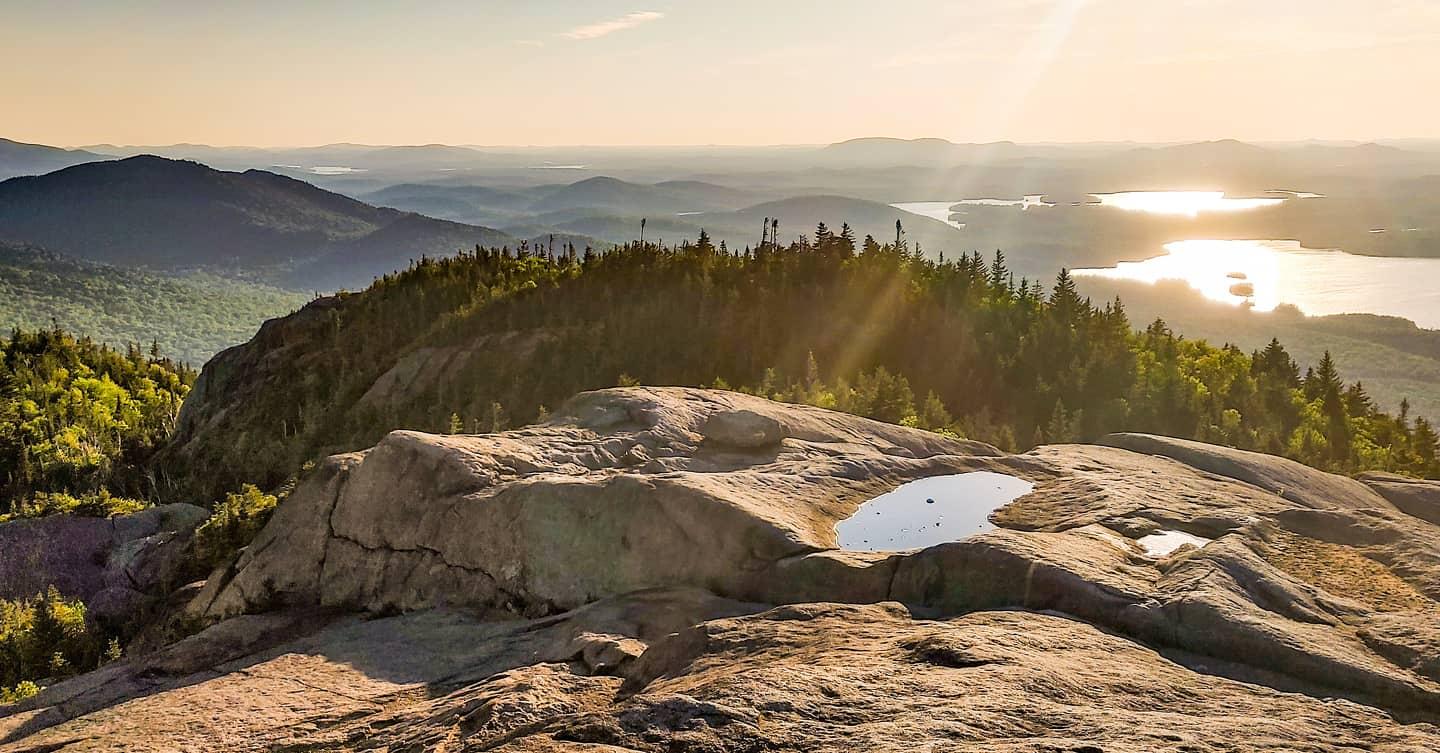 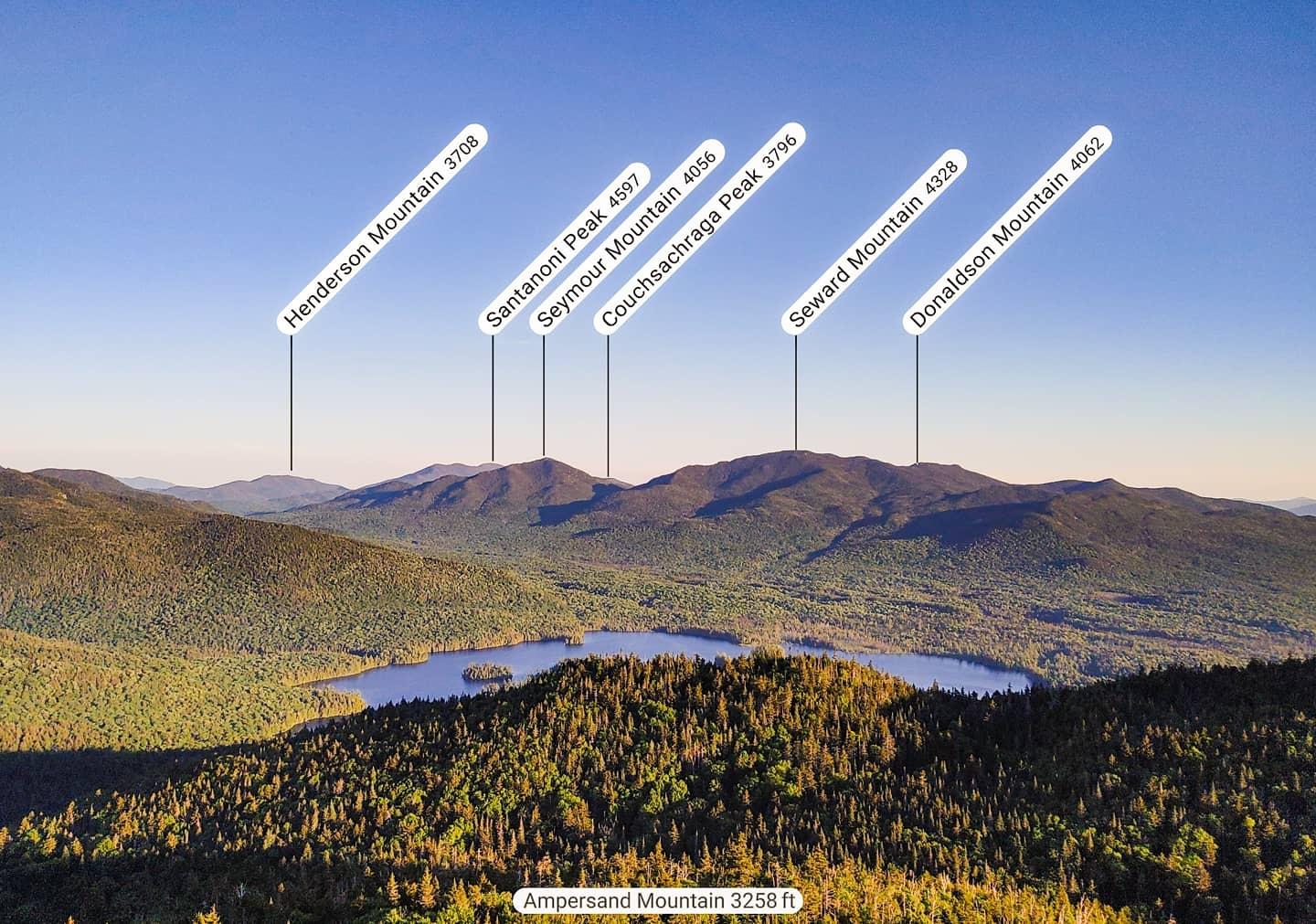 While it was incredibly beautiful up there, there was one tiny thing that threatened to ruin the experience….or, rather, thousands of tiny things.

The black flies were out in force, and they were HUNGRY. And evidently, I am DELICIOUS. Fortunately for me, I have a bug net hat!! 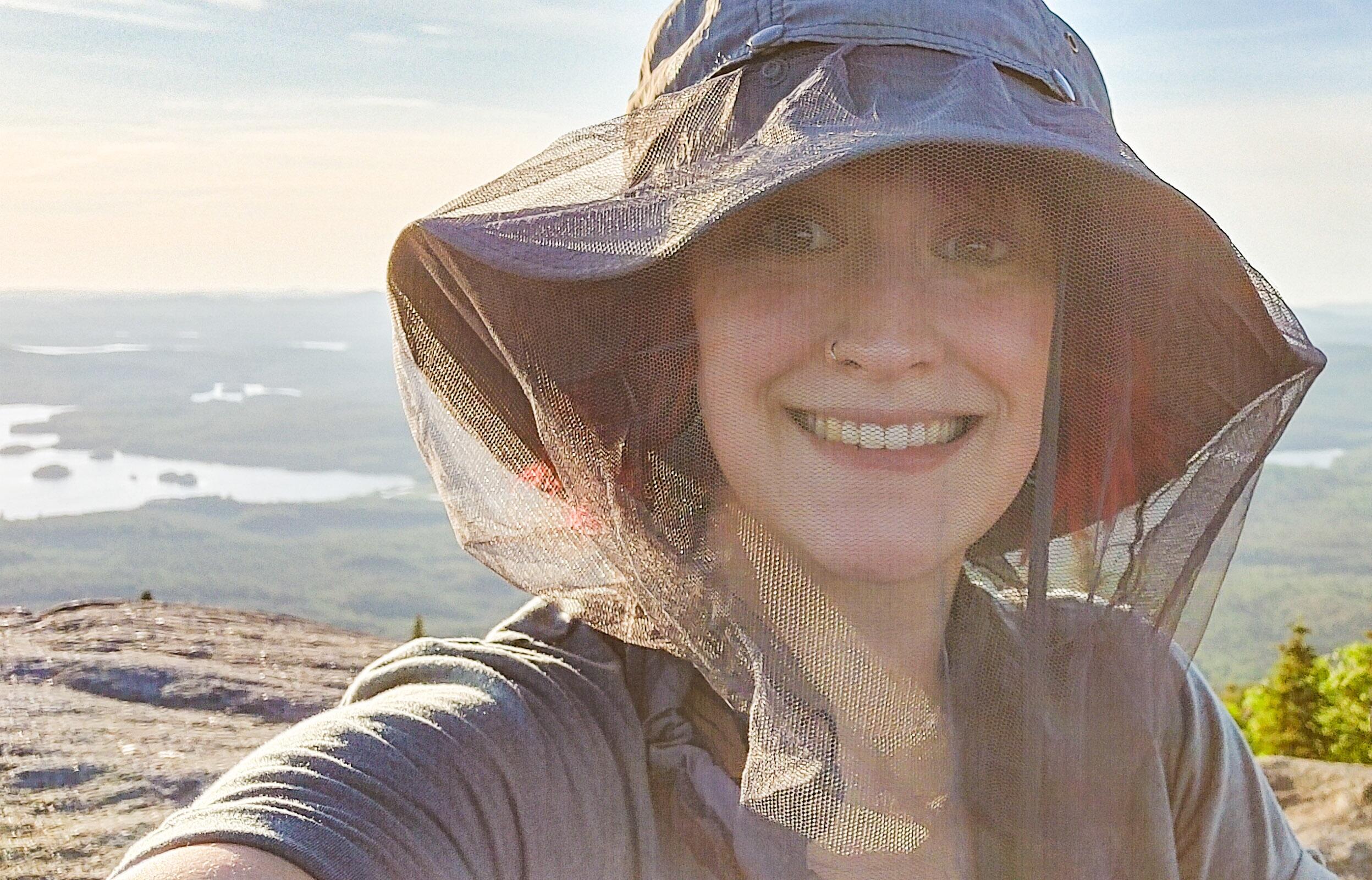 I lingered on the summit – which I had all to myself – for another 30 minutes to enjoy some snacks from the safety of my bug net while enjoying the scenery.

Finally I started heading back the way I’d come. I was hoping to make it most of the way down before the sun had completely set so I’d not be hiking alone in the dark for too long. As I trotted along I met one other pair of hikers going up, just below the summit. It was actually nice to know there were two more people on the trail behind me. 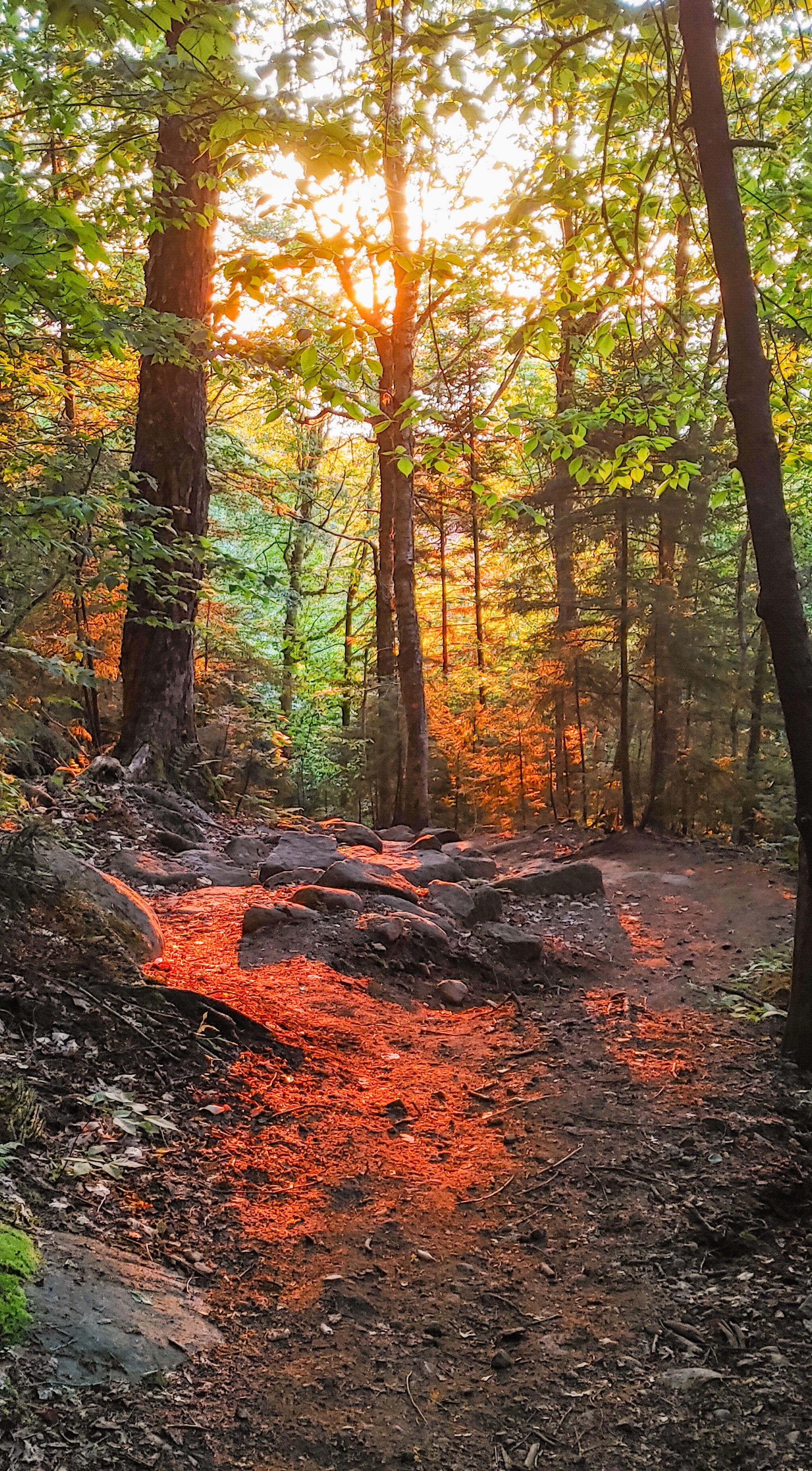 As I descended, I was heading directly towards the sunset and had the most beautiful light filtering through the trees the whole way down. Each step I took I tried to tell my brain to use only certain muscles in my legs, as I clambered down the path without the usual care I take to be gentle on my knees. This time, I wanted to push it to see if I could make it through the hike without pain while walking like a normal human. Fortunately, though the trail was quite steep towards the summit, it was never technically challenging at all, just seemed to be a bit longer than it actually was! For the last mile or half-mile I did feel the pain starting to develop in one of my knees, but only ONE of them for a change! And it never quite got as bad as it gets, so that’s progress! 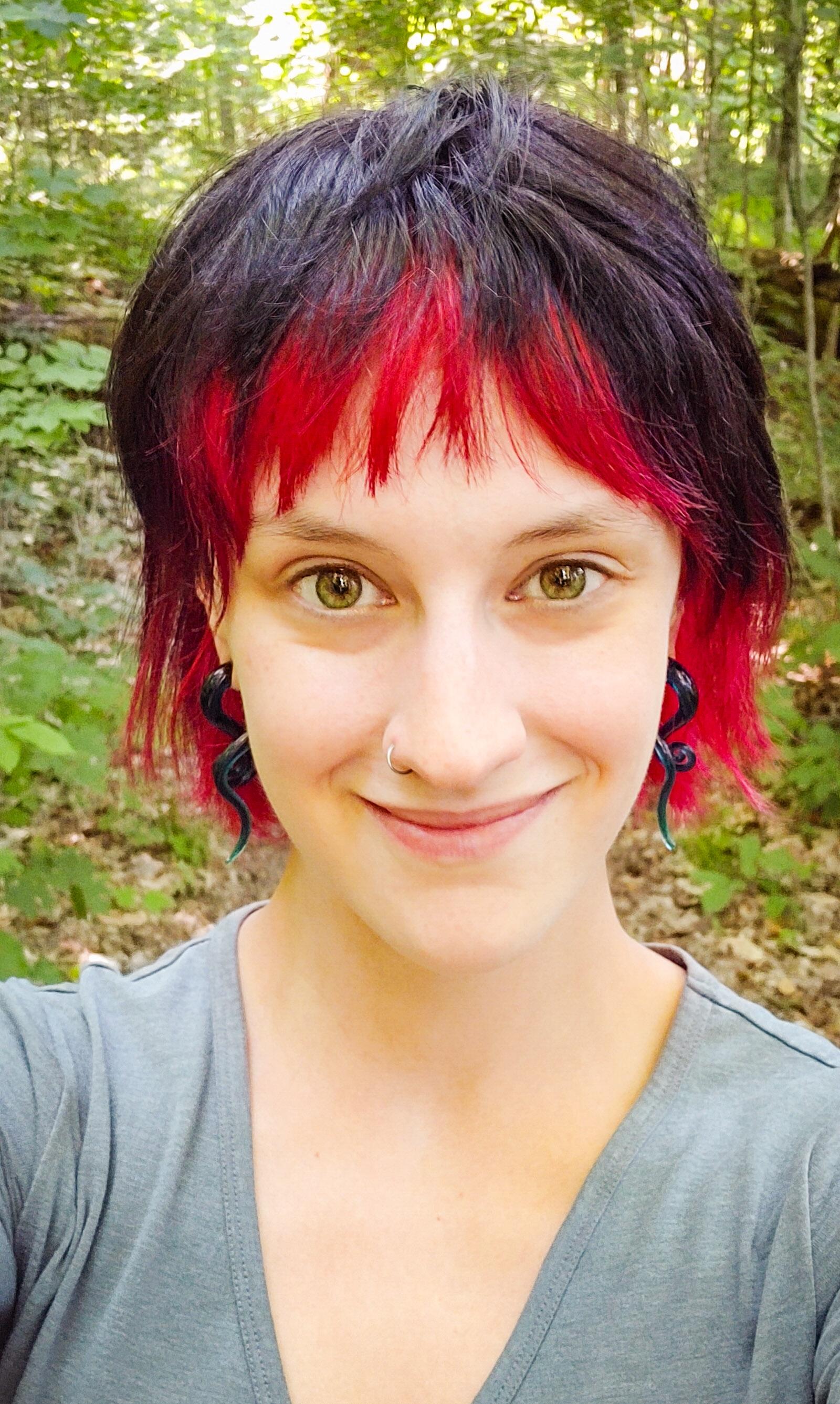 Anyway, I made it back to my car by 9pm, a little less than 4 hours from the time that I started. At this time of the year I only had to use my headlamp for the last 20 minutes! It was a great day for an emergency hike ✌