Now that summer is basically over, the crowds have dispersed, weather is cooler, and I have Tuesdays free, I figure it’s time to get my lazy butt back into the mountains. I’m starting to push myself again to see if I’m ready to hit those high peaks, so I thought a good place to start would be with the Lake Placid 9ers. My plan was to go up Bear Den, then head into Keene to try for Big Crow as well.

I left home by 7am and drove the three hours to Wilmington, with the most bizarre rising sun ahead of me. The only time I’d seen a sun looking like a floating orange ball in the sky, with no aura, is when I’d seen it through smoke from wild fires. Considering the circumstances out west, that isn’t exactly a crazy assumption. I made it to the trailhead of the Flume Trails off of 86 where I met two of my very best friends, Gavin and Steve! 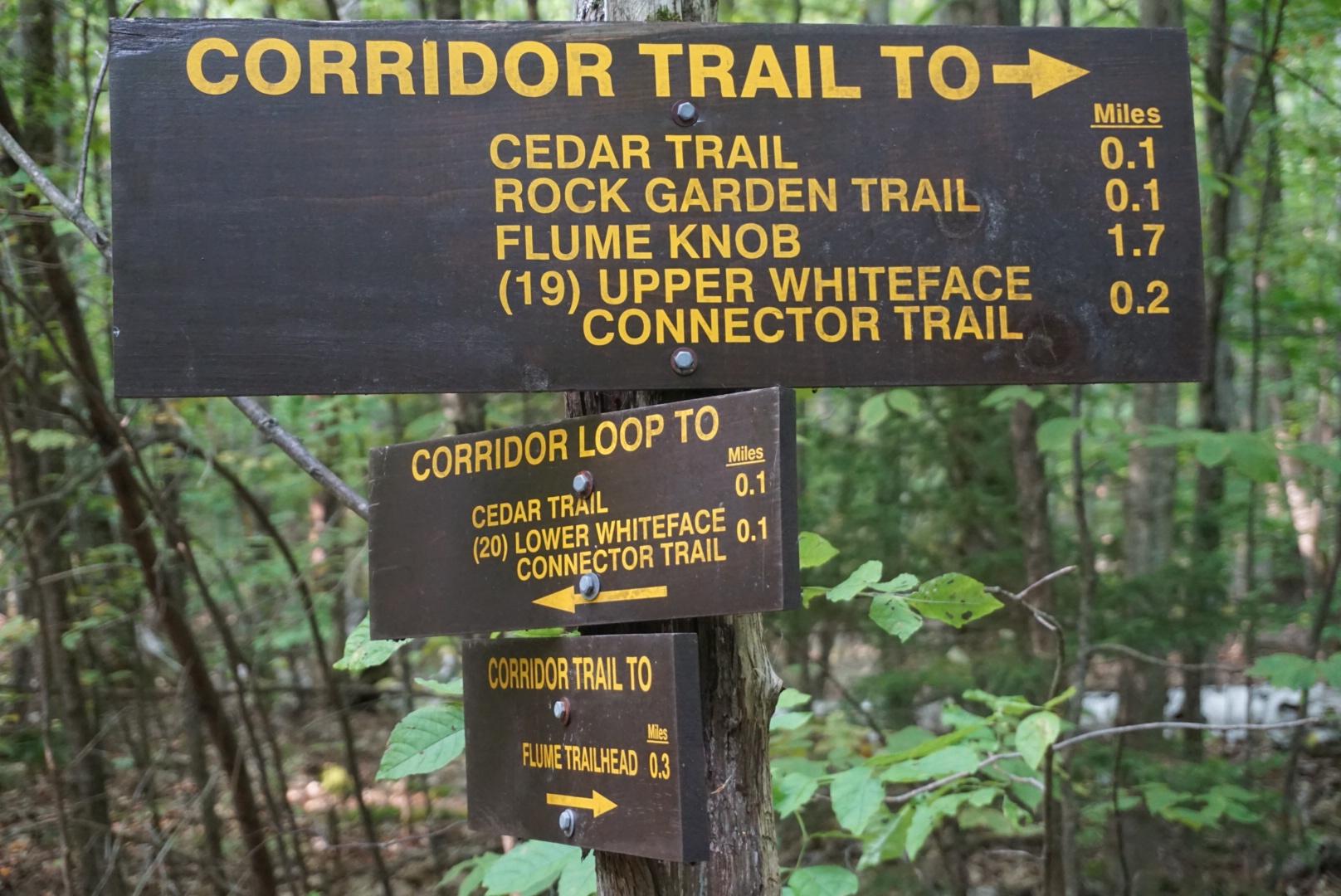 We tried to sign in at the trailhead (“tried” because there were no free spaces on the sign in sheets) and set off on the wide mountain-biking trail at 10:30am, with Juno zipping between the trees left and right. My map didn’t have very clear markings for these trails, but fortunately I snapped a picture at the register of the trail map, which came in handy as we reached each of many many junctions. We stayed on the Corridor trail heading towards the Upper connector trail. 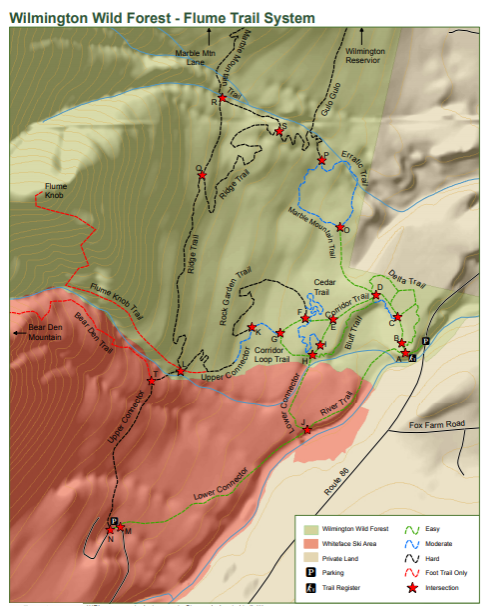 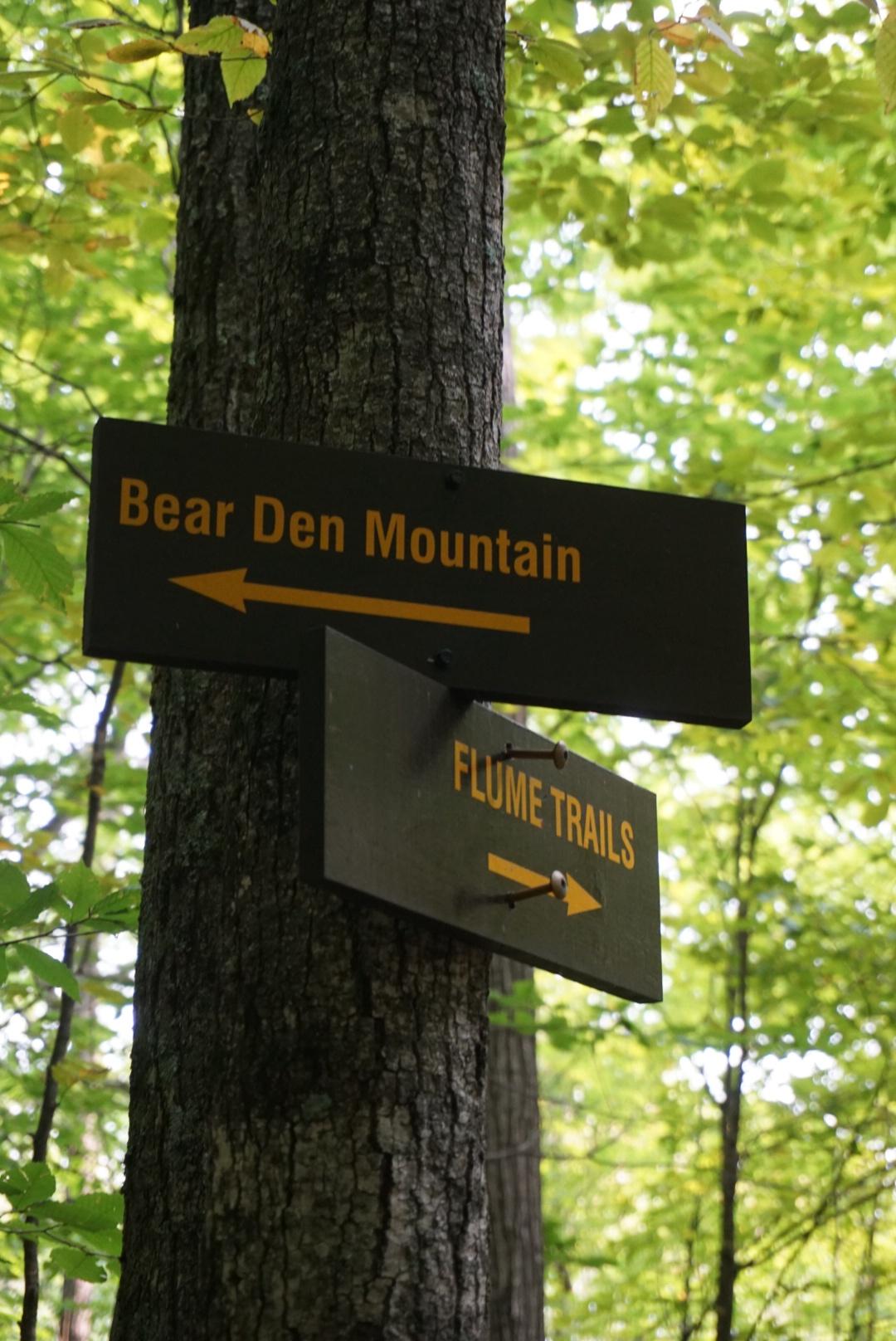 After some climbing, we reached a beautiful “sugar bush” which Gavin was particularly excited about, full of strong maple trees just starting to drop their bright leaves on the forest floor. Gavin gushed at all of the maple trees, hugging a select few special ones, while I oohed and aahed at the MUSHROOMS. The mushroom situation on this trail is unreal. I had to fight the urge to pick them every time I found a large strand of shroomies, so instead, I took photos of them! 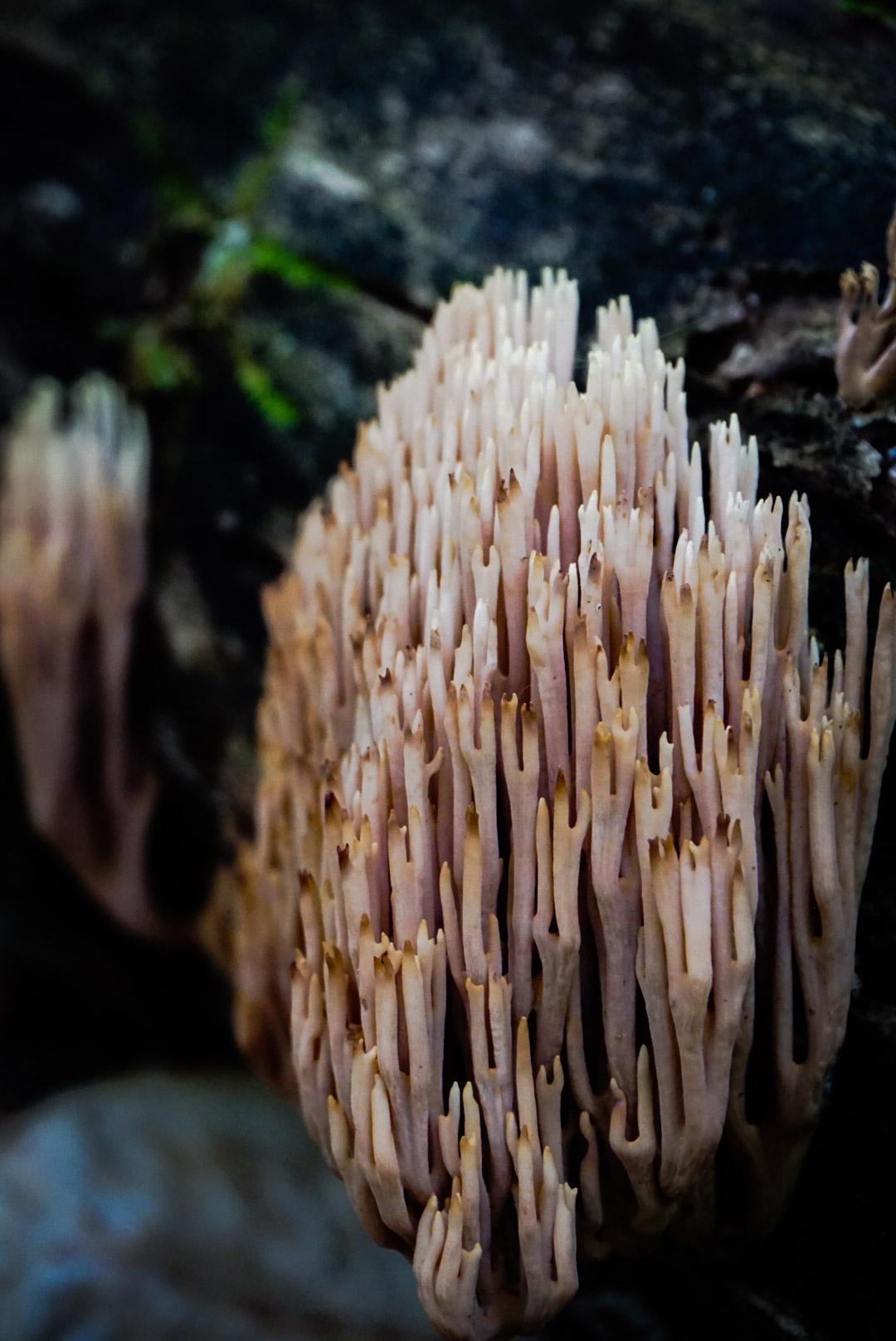 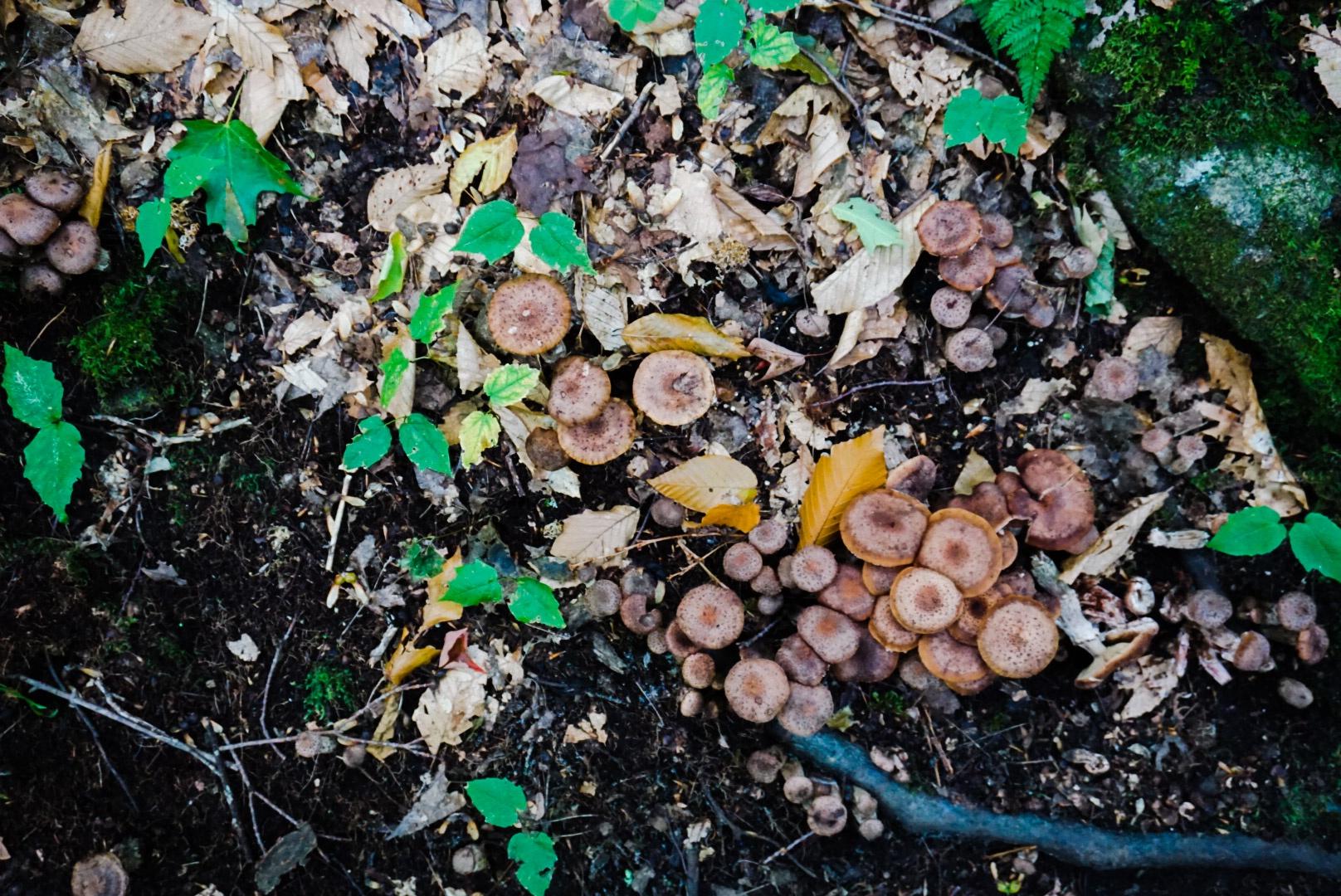 It was around this time when I started to realize how out of shape I am. I’m trying to assess if I’m ready to get back into the high peaks, logging 20-mile days with a full pack, so I thought I’d try hiking with my full pack for these smaller hikes to see where I’m at. DANG BUD, IT’S ROUGH. Of course I wouldn’t tell my hiking buddies at the time but my god I felt like I’d be better off dragging my carcass along the trail with my arms! Instead, I insisted on frequent breaks to catch my breath, using the opportunity to get Gavin talking about trees to extend our break (Sorry Gav! I’m shameless), before continuing on. It wasn’t a particularly long hike, but it was a bit more strenuous and a bit more UP than I suppose I was expecting! 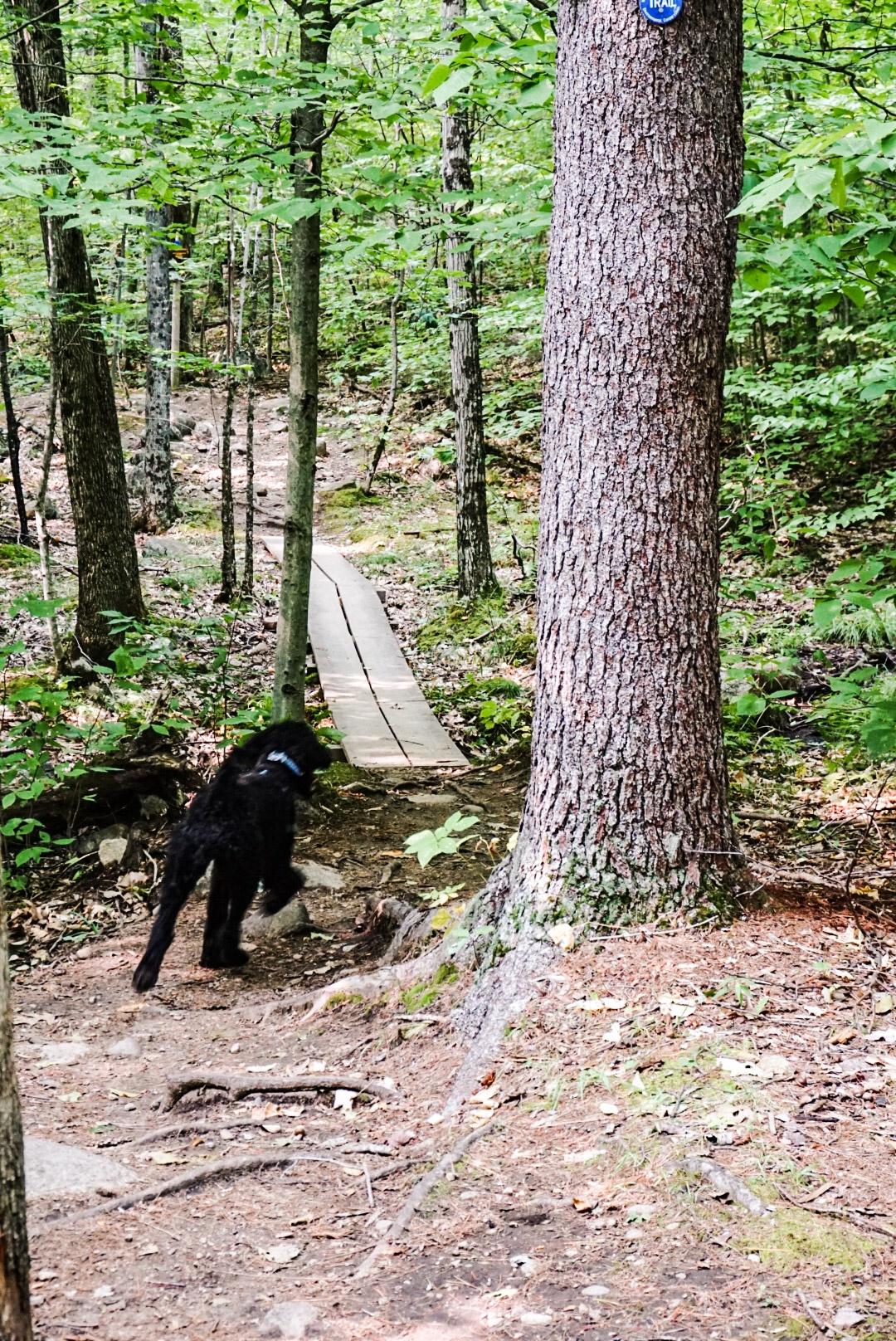 Along the way, we passed only one older couple heading down, so I was looking forward to having the summit to explore on our own. We climbed and climbed and finally I could see a break in the trees! We scrambled up to a gorgeous view of Whiteface Mountain practically looming over us at 12:30pm. 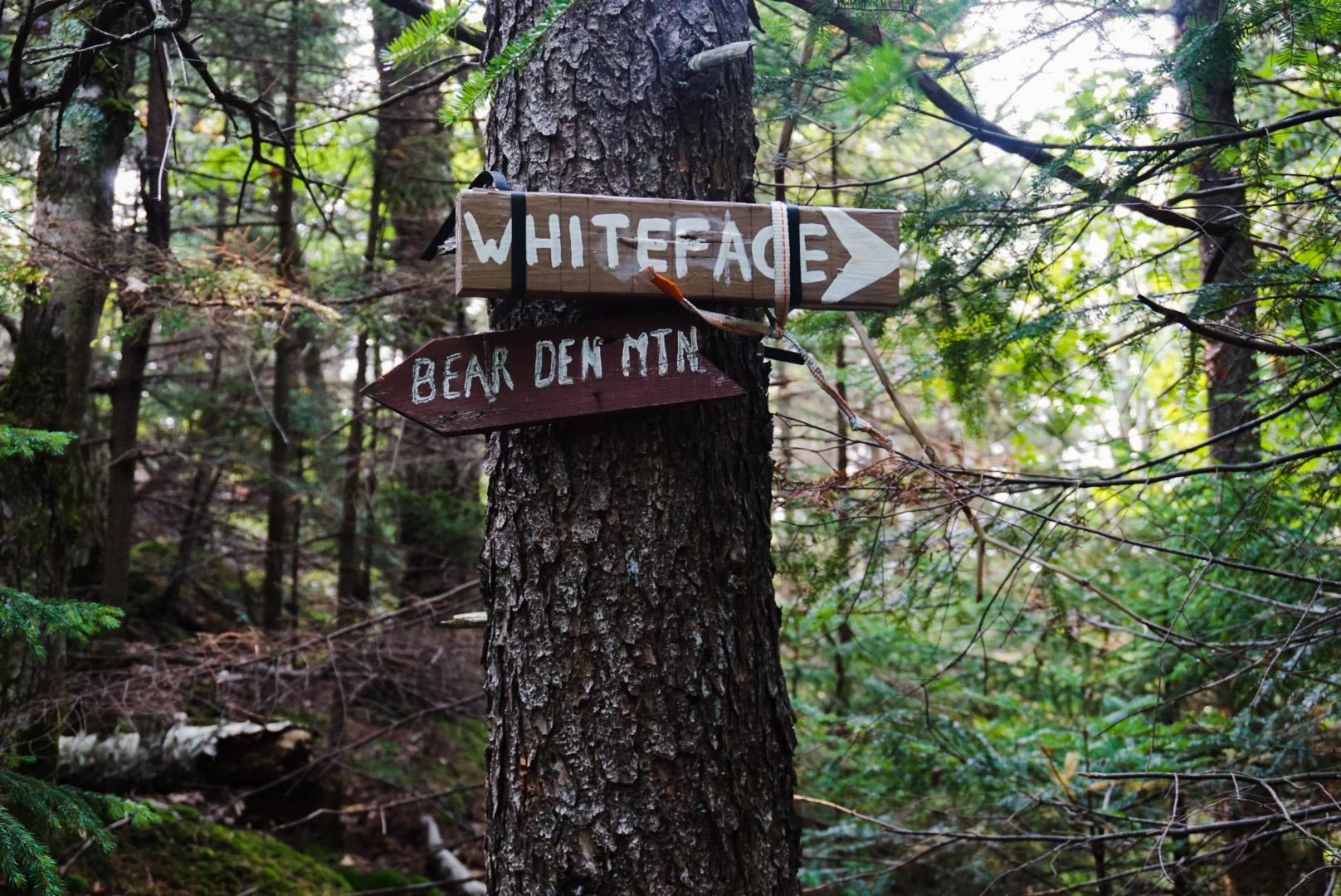 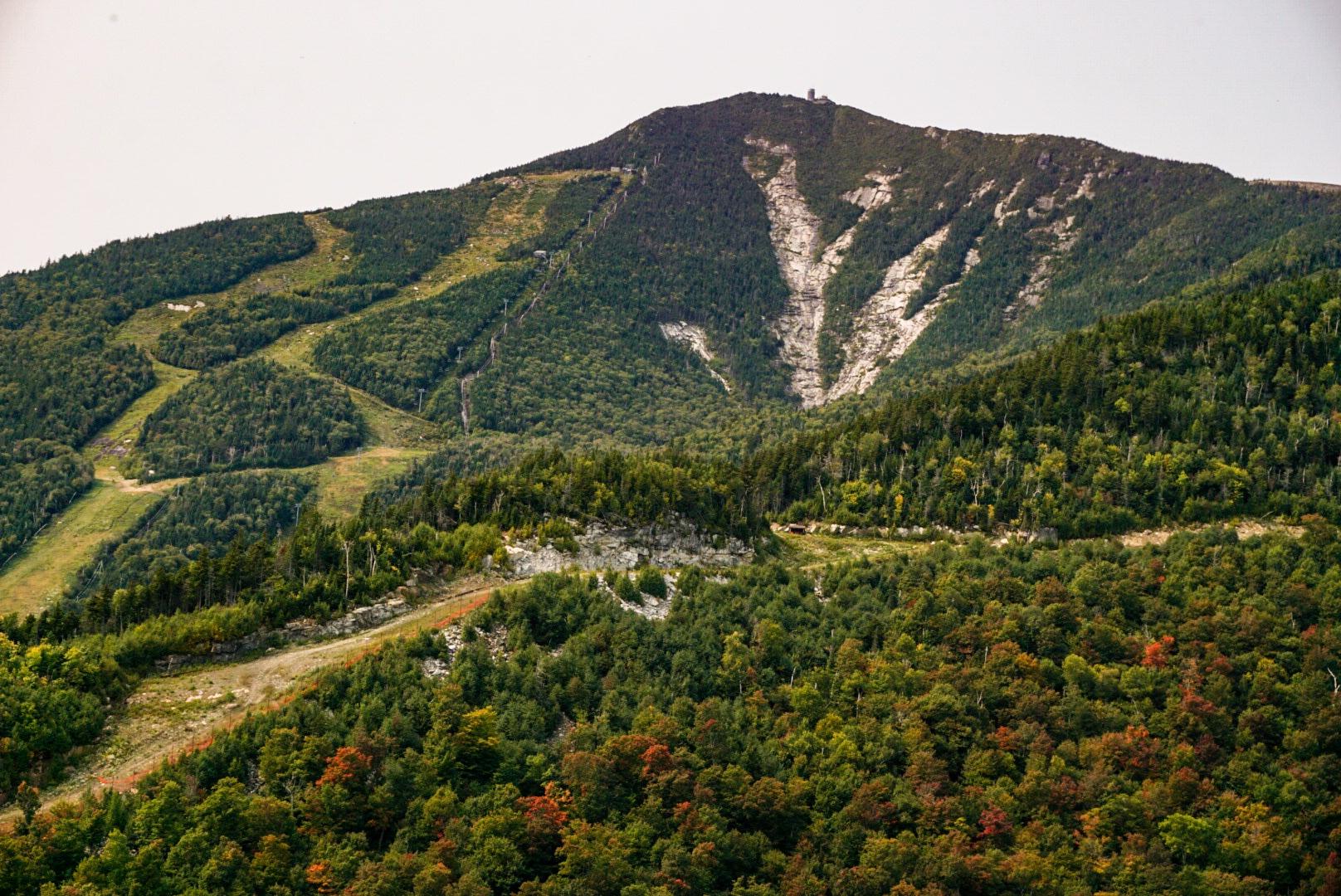 We three dropped our packs to soak in the view and have some lunch, and after a few minutes Gavin and I realized we lost Steve! Jokingly I said, ‘Maybe he took a wrong turn and wound up on Whiteface!’, but instead we found a narrow trail leading further up. As it turns out, we weren’t actually on the summit. We left our packs behind, and I felt positively bouncy! I felt so light without the weight of my pack as I bopped my way along the trail. After just a few more minutes we were at a slightly higher outcropping with a slightly nicer view, where we found both Steve and Juno. 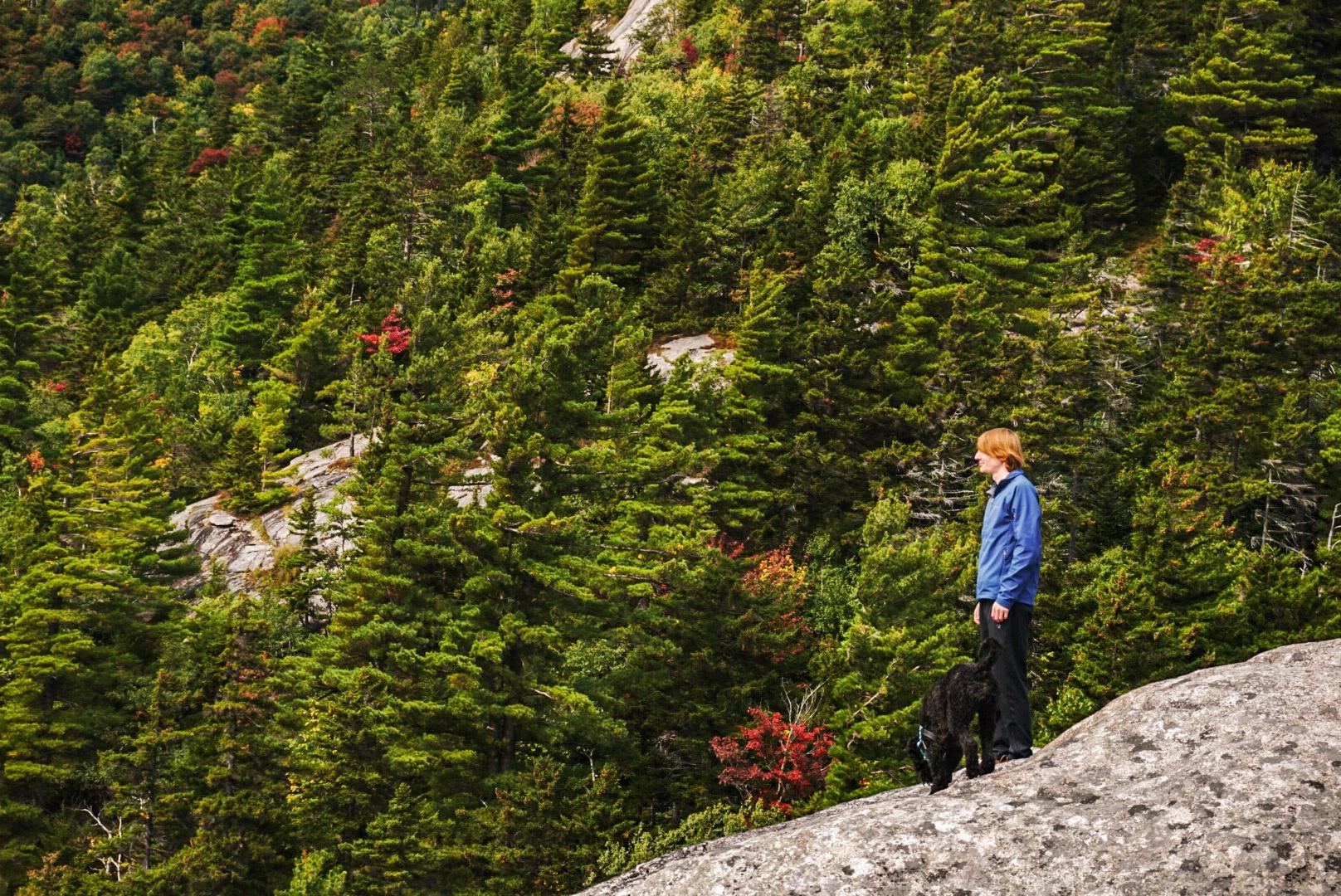 Naturally, I immediately set about capturing some photos. I was feeling very frustrated as I stalked around, crouching and leaning to get various shots of the landscape, but the sky was just so….UGLY. It was ugly. There was not a single cloud in the sky, so logically the sky should have been blue, right? But no, it was this greyish-whitish haze that settled to a ruddy orange around the peaks in the distance. It made all of my shots look slightly out-of-focus. One of my biggest pet peeves as a photographer is when people saturate the sky when taking pics, so the sky just looks totally white instead of showing any dimension or clouds…..AND THAT’S WHAT ALL OF MY SHOTS LOOKED LIKE! But they weren’t saturated, just…ugly! So that was the second indication of the day that we were seeing massive amounts of smoke, high in the atmosphere, that had drifted in from the wild fires out west. 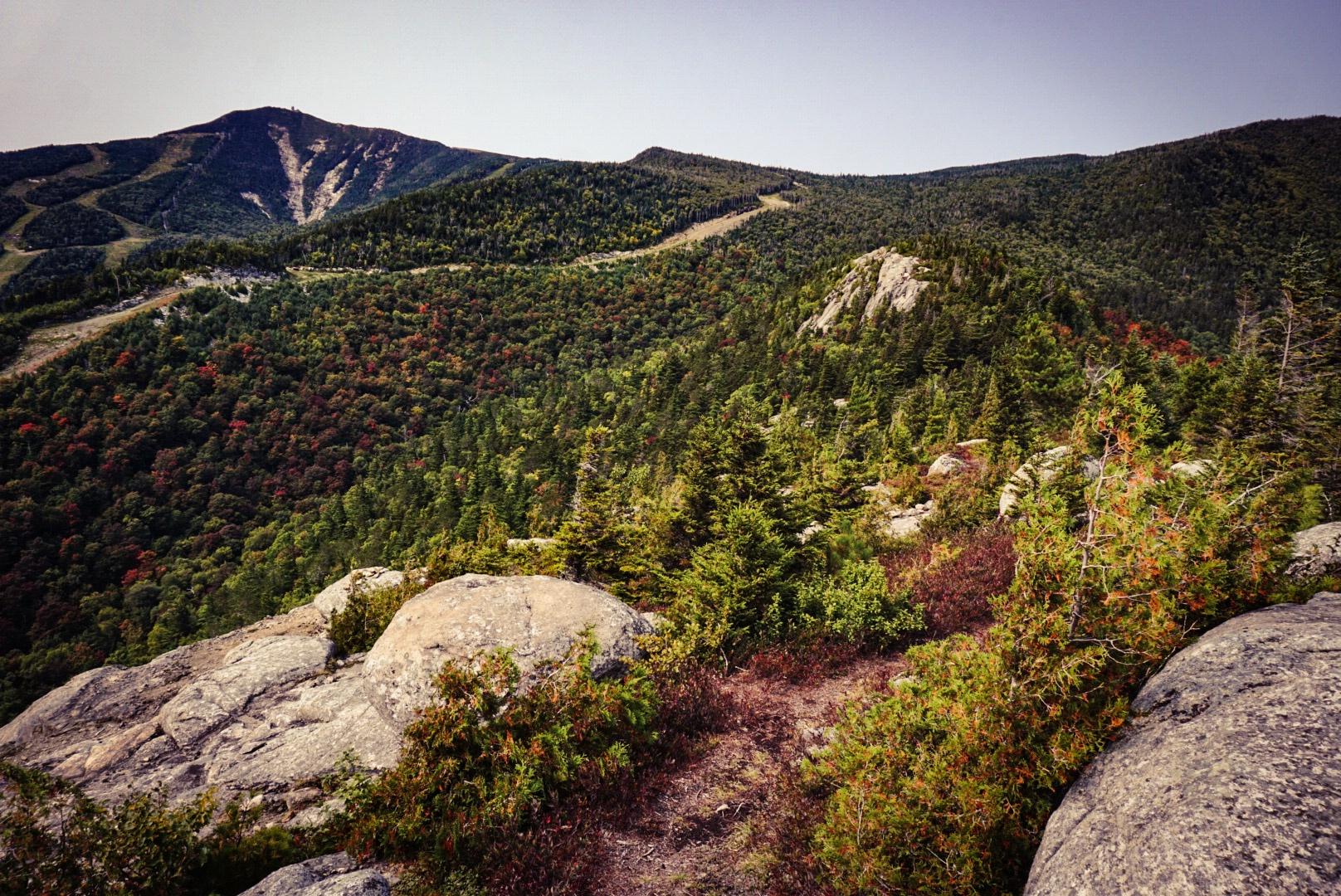 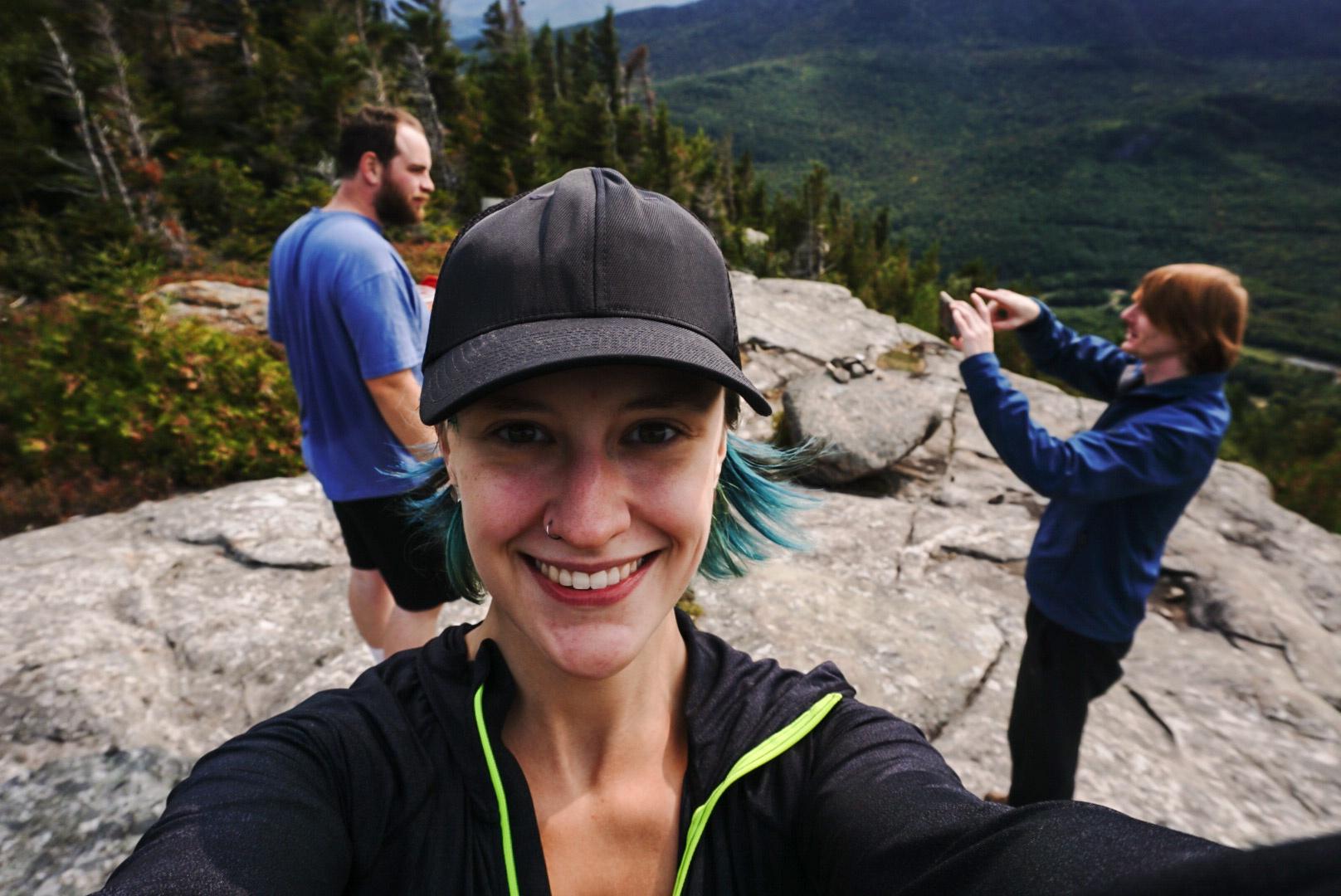 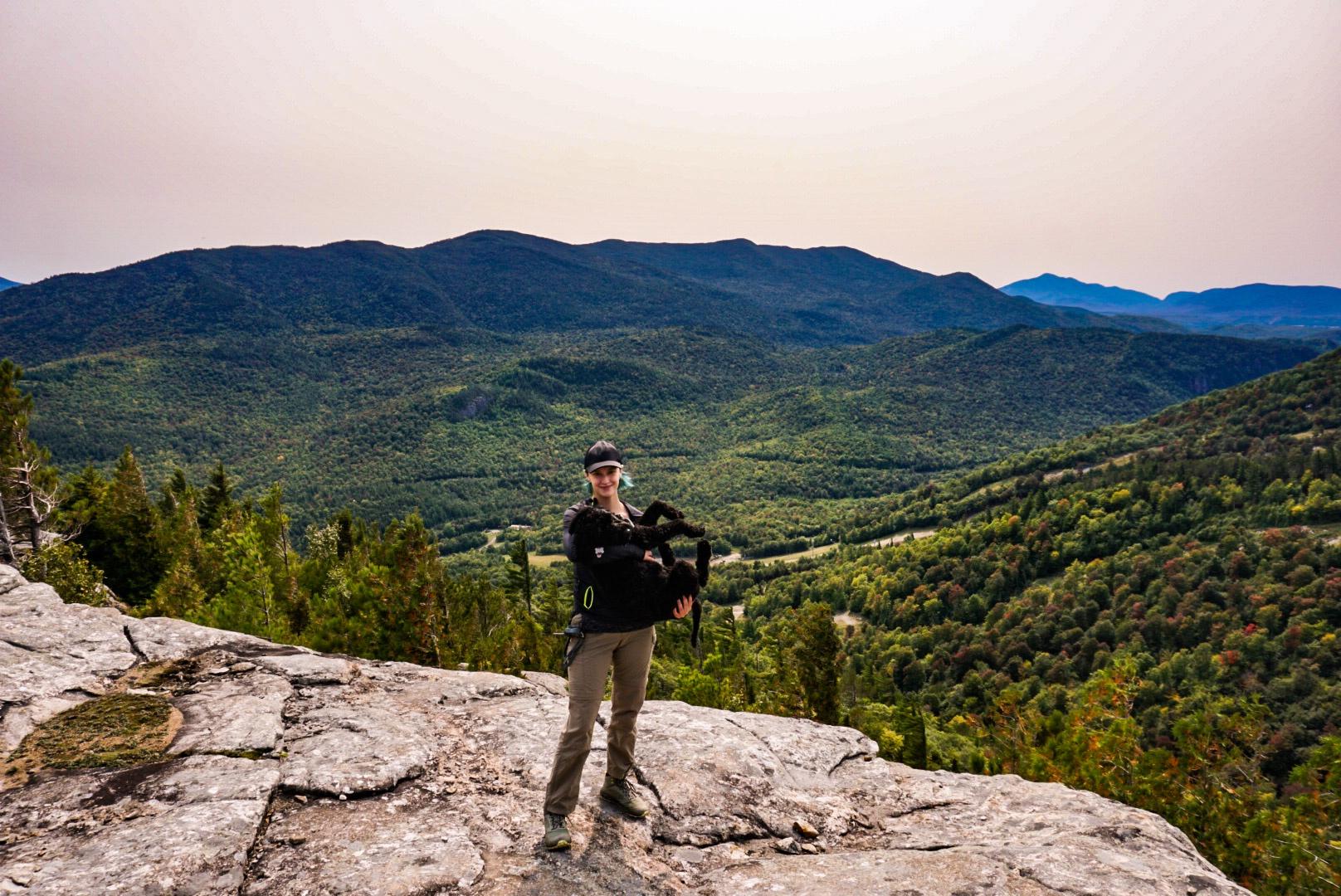 Despite the ugliness of the sky, we marveled at the pops of red sprouting in the canopy beneath us. 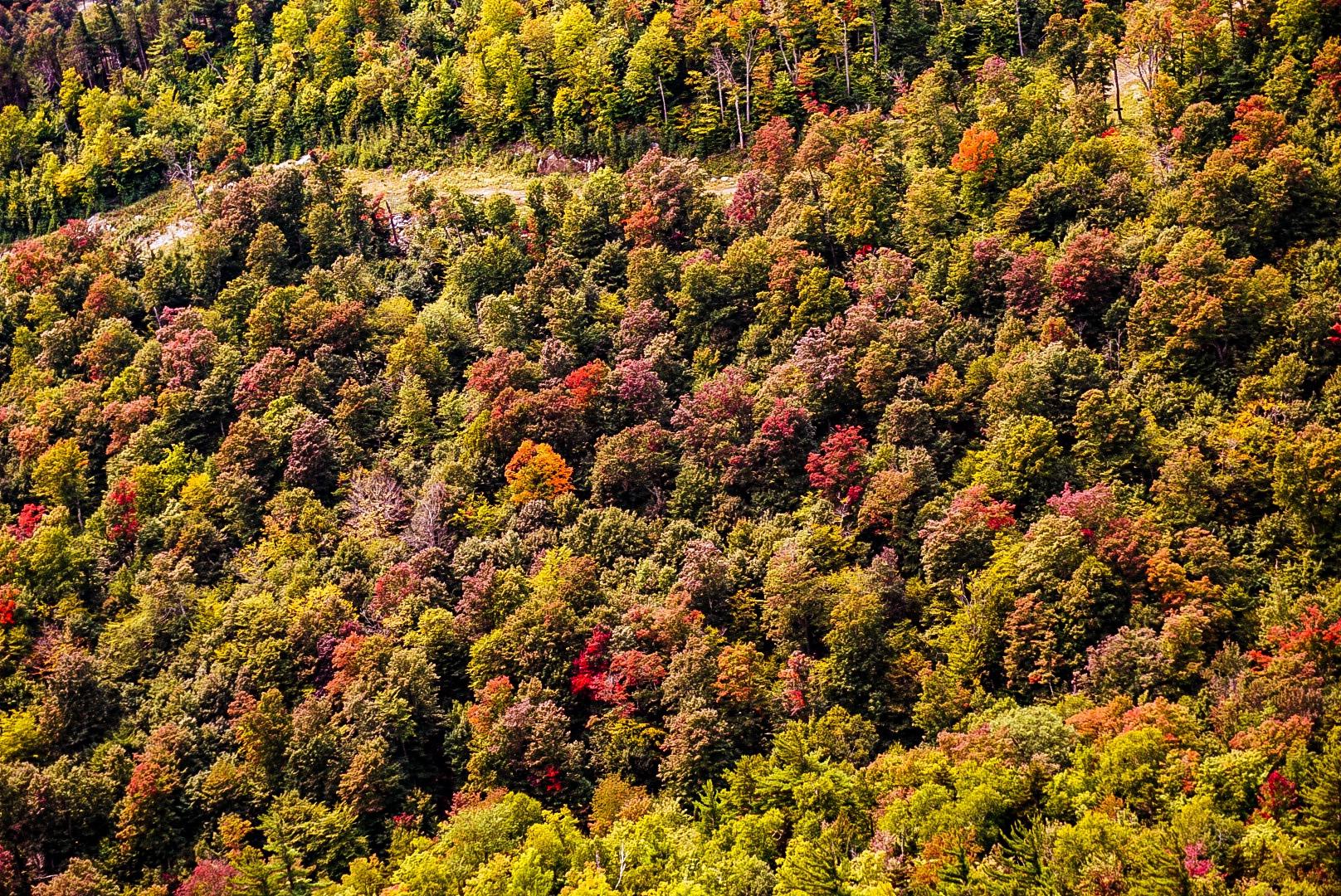 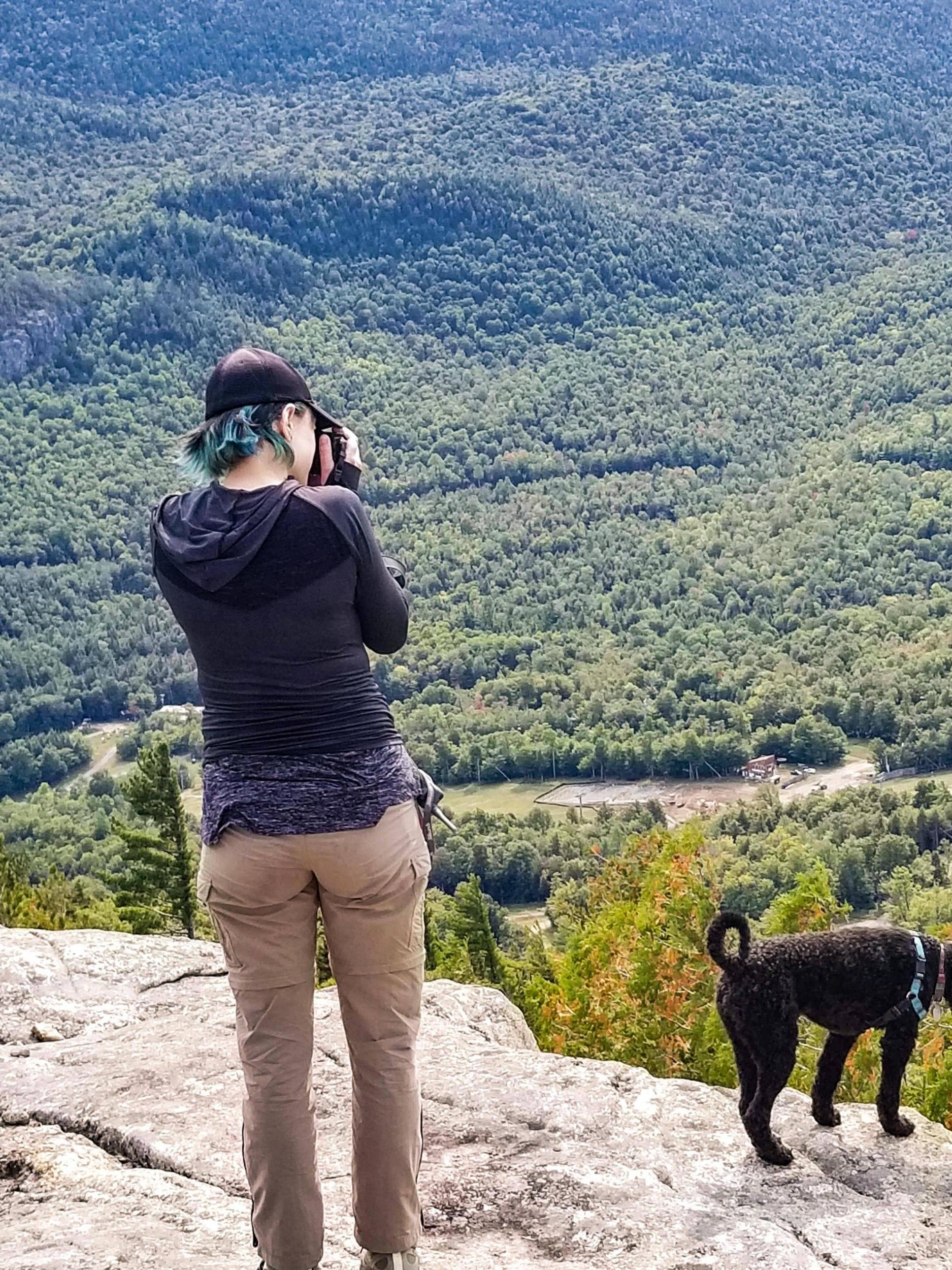 We hung out for a while regardless, and I turned my focus to a lovely model to distract from the ugly sky – Juno! Her poses were really on point. Check out this saucy look: 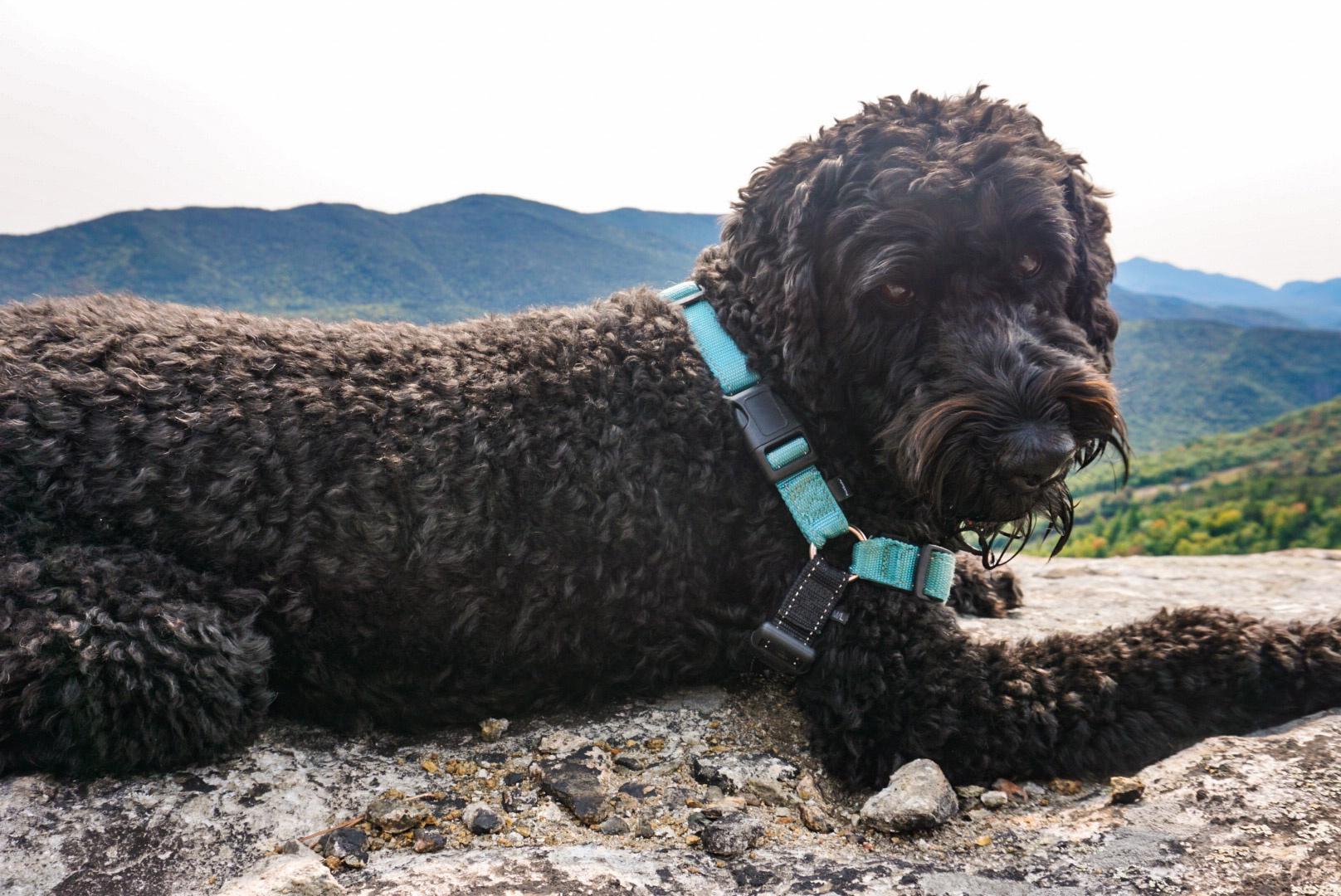 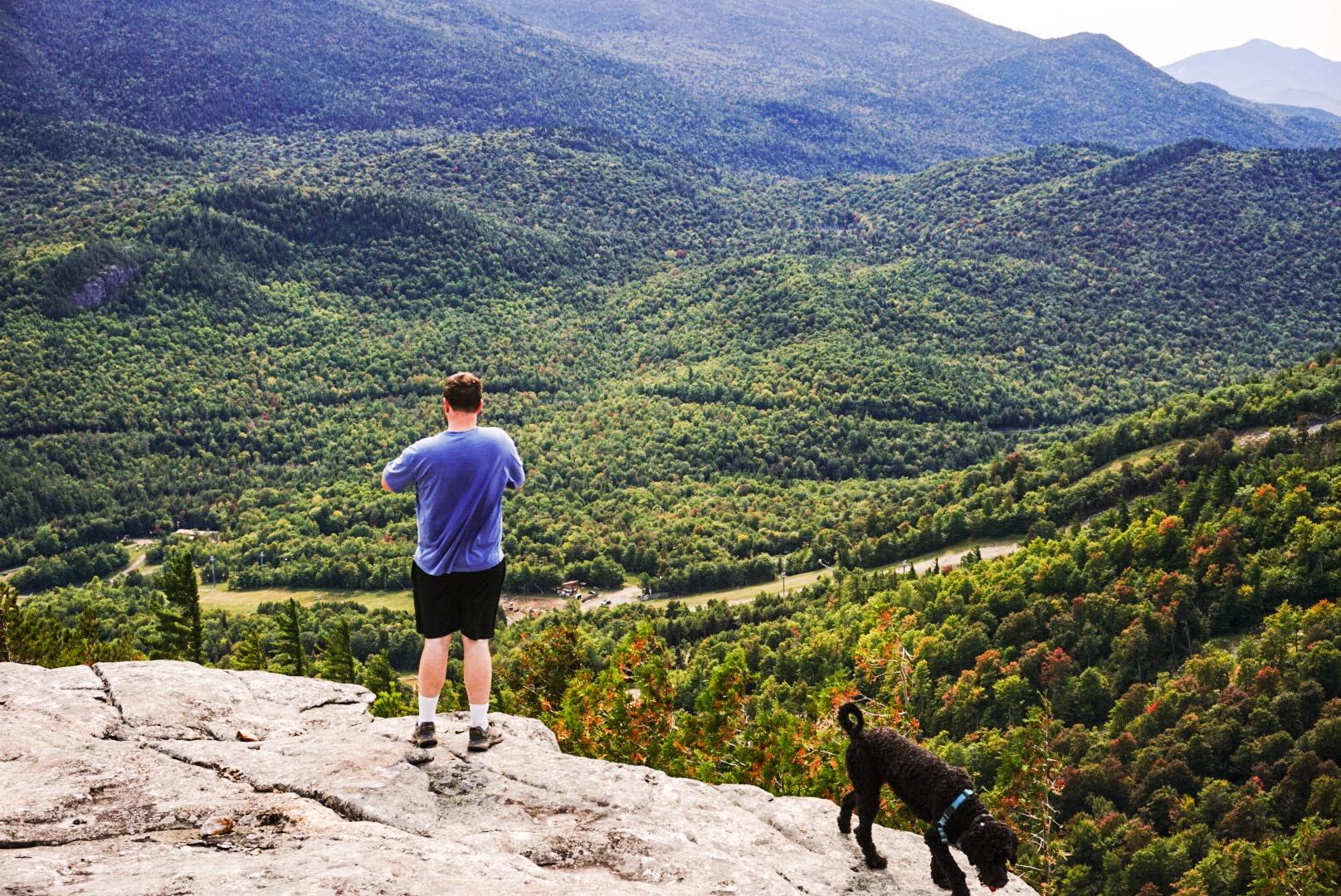 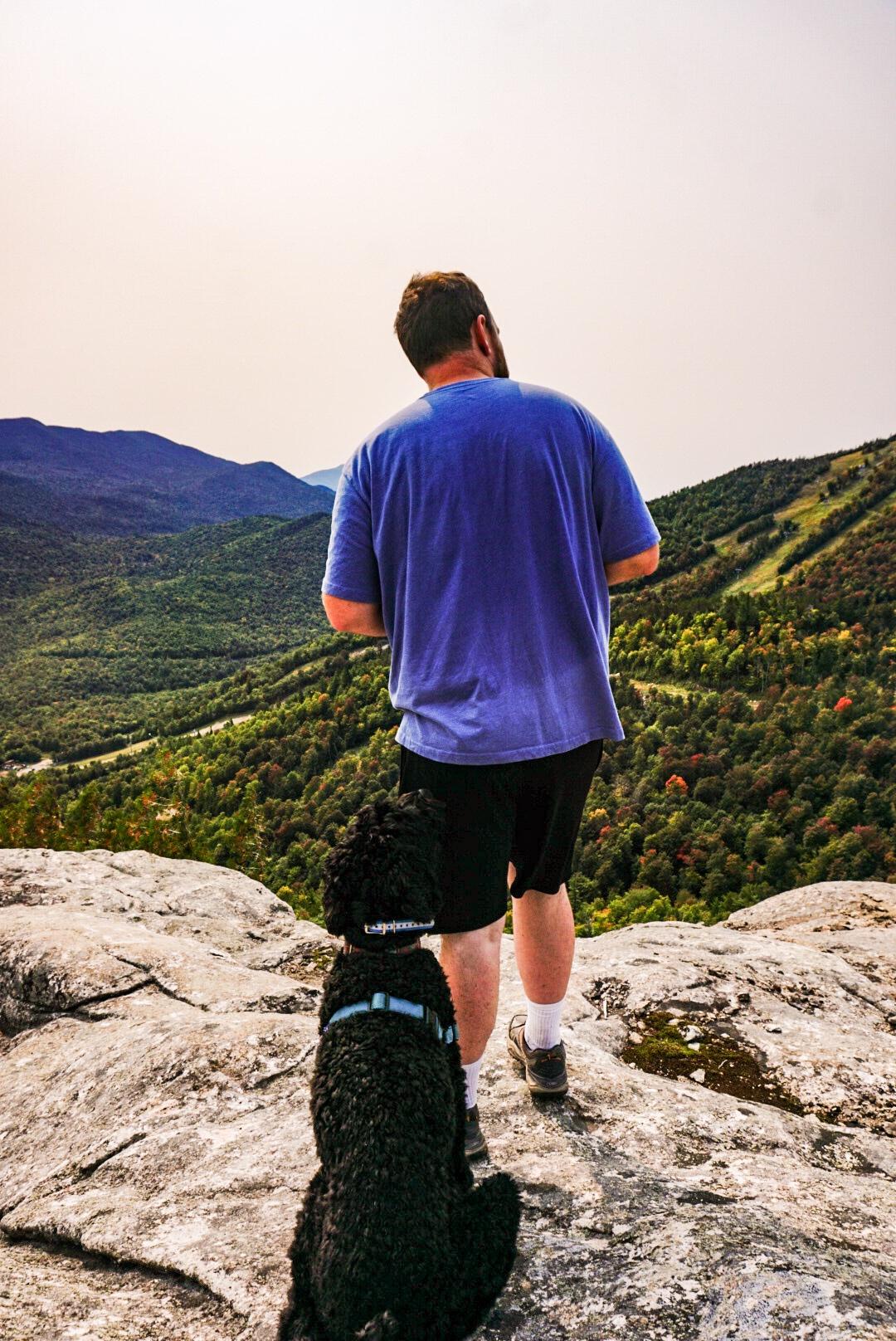 At 1:15pm we decided to head back down so that we’d have time to make it to our 2nd peak of the day. Right about at this time we encountered our second pair of people for the day, a couple who also thought the first rocky outcropping was the summit. We directed them to the path to the top, and hustled down the trail. 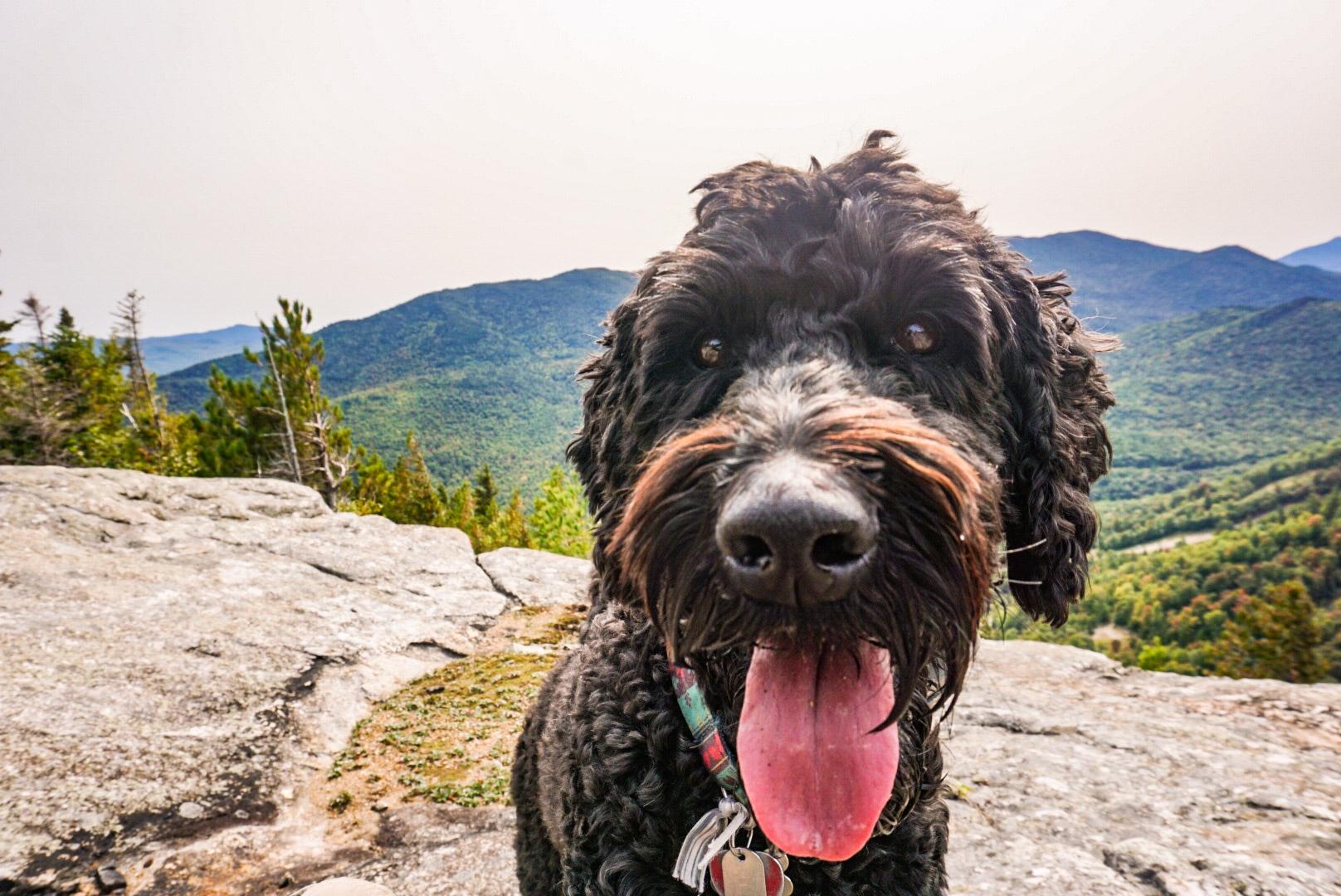 The descent was much more smooth than the climb, and I was thrilled to find that my knee didn’t hurt! Since we were making good time, I didn’t feel guilty about stopping and climbing into a stream to get some pics. 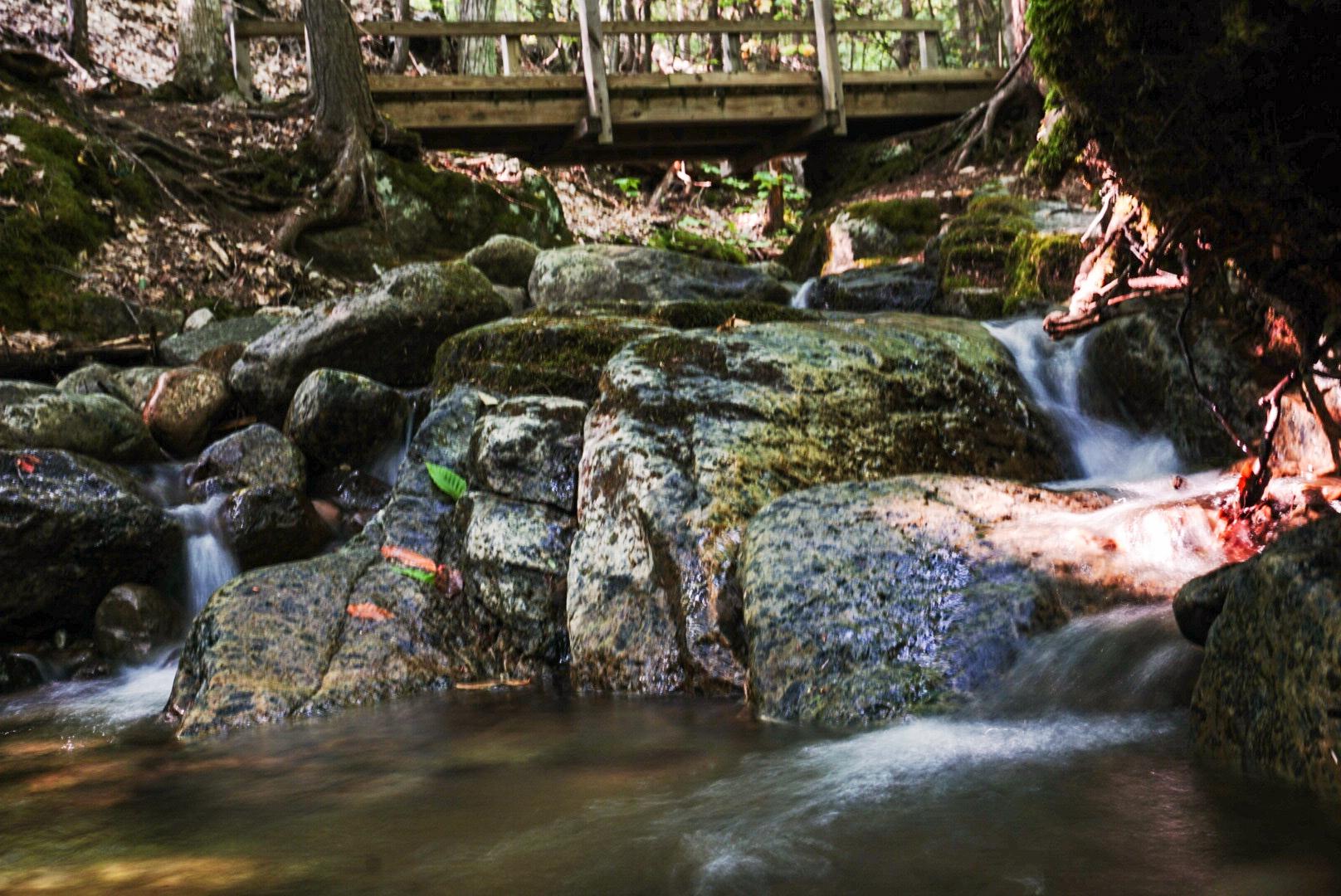 As I was climbing out of the stream, I noticed Juno acting real odd next to me up on the bank. She was jumping around, wiggling and scratching, and I noticed a small bright yellow wriggling mass sticking out of her haunch: a hornet was repeatedly stinging her viciously in her hind hip! I swatted it away, but it continued to dive-bomb us so we ran ran ran back to the trail to the boys. She was still acting erratic and scratching at her head when Gavin saw another hornet fly out from behind her ear. We looked back at where she and I had been near the stream and spotted a hive on the ground, surrounded by the swarming assholes. Once we were sure Juno was fine, we wasted no time in getting the hell out of there. 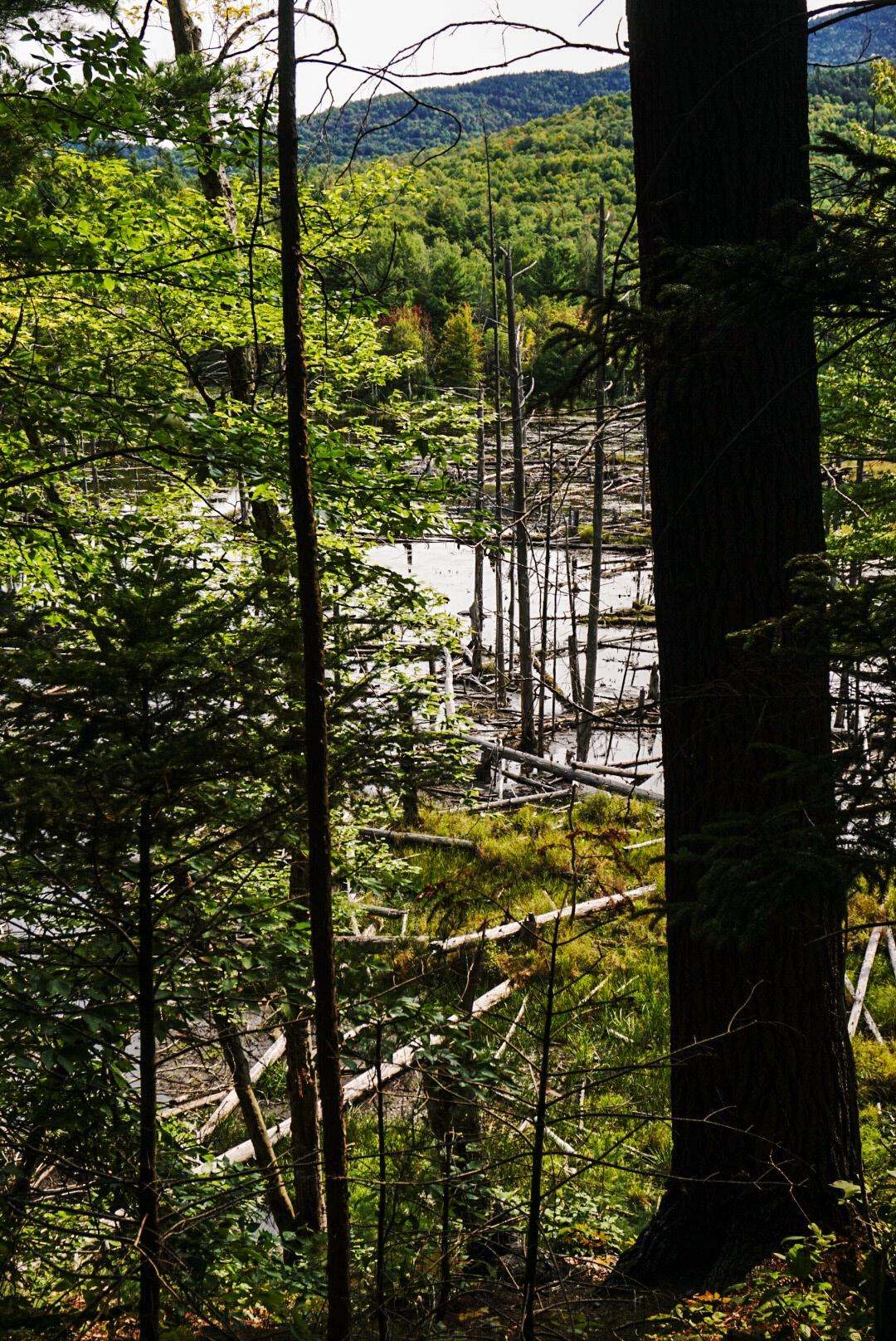 Before long, we were back to the mountain biking trails above the marshy pond. We saw a few odd groups of older folks slowly ambling up the trail; for some reason they seemed quite strange to me. Maybe it was the way they were dressed, or that they gave us wary looks as we passed and wouldn’t make eye contact. Whatever the case, we made it back to the parking lot at about 2:30pm, had some snacks, and headed off for Big Crow. Juno never stopped running today, so the first thing she did was pass out in the back seat. Poor thing thought we were done for the day!

Total Duration: ~4 hours, including time at the summit

Next up : Big Crow Mountain