It’s a gorgeous Sunday, with perfect weather, AND it’s my Birthday! All I wanted was to spend some time in the mountains. I only recently learned about the Lake Placid 9er challenge, since I’ve been recovering from a persistent knee injury for a few years I must have missed it! Now I’ve got my sights set on completing this challenge too, and since the high peaks are overwhelmingly swamped with hikers these days I thought it would be a great opportunity to explore some less-popular trails. So off we went to Mt. Van Ho! There are two main trailheads for this peak – one that starts at the Mt. Van Hoevenberg ski center, and one that starts either at the Loj or at the South Meadows lot. I wanted to avoid the crowds and the parking issues present in the high peaks lately, so we opted to start at the ski center. There were several cars in the lot, but we realized most of them were there to mountain bike, not to climb the mountain. We signed in, I peed for the millionth time that morning (having downed an entire nalgene with Nuun – see Noonmark mountain – to prevent dehydration during the hike), and we set off around the building and over the bridge into the trails right at 1pm. 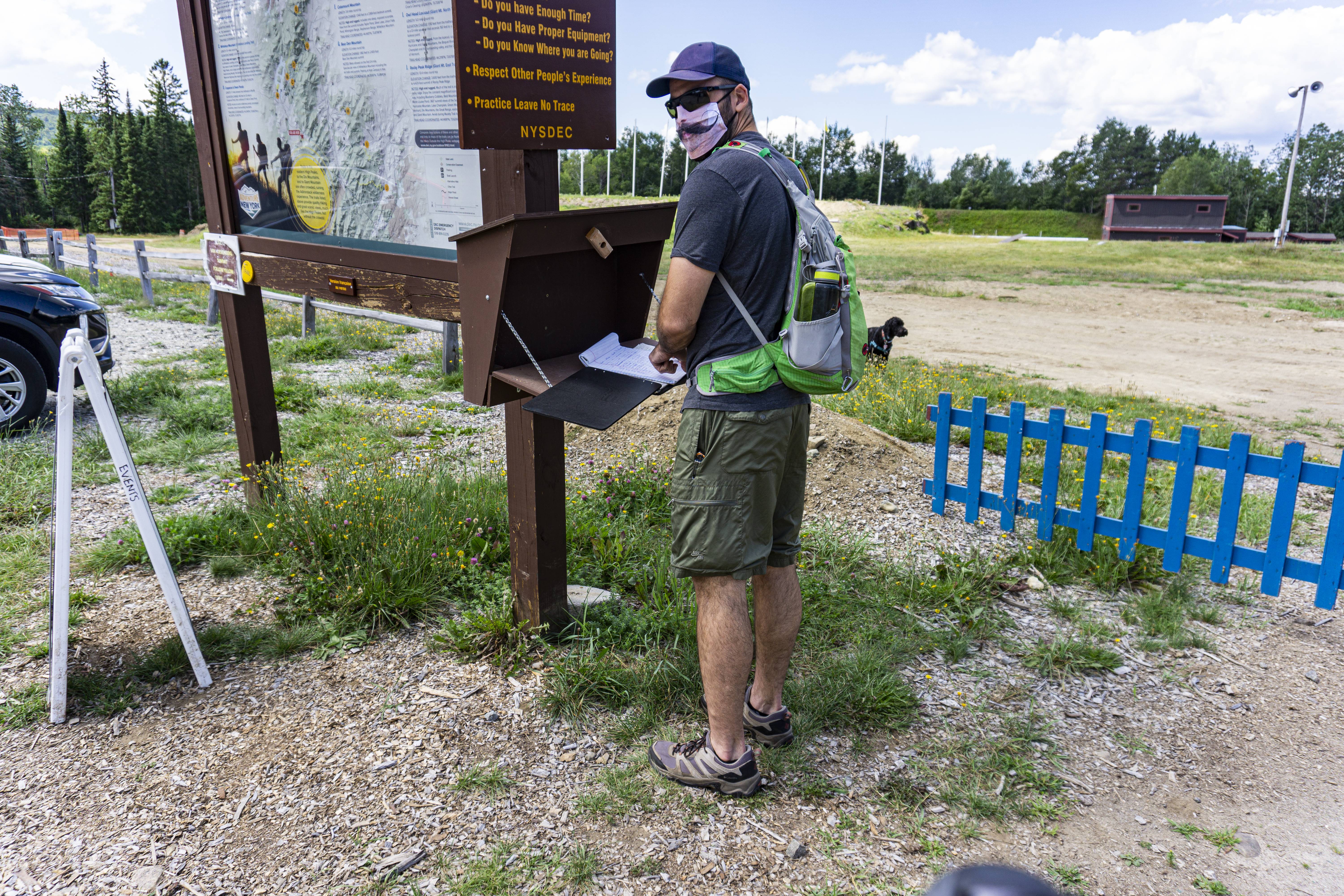 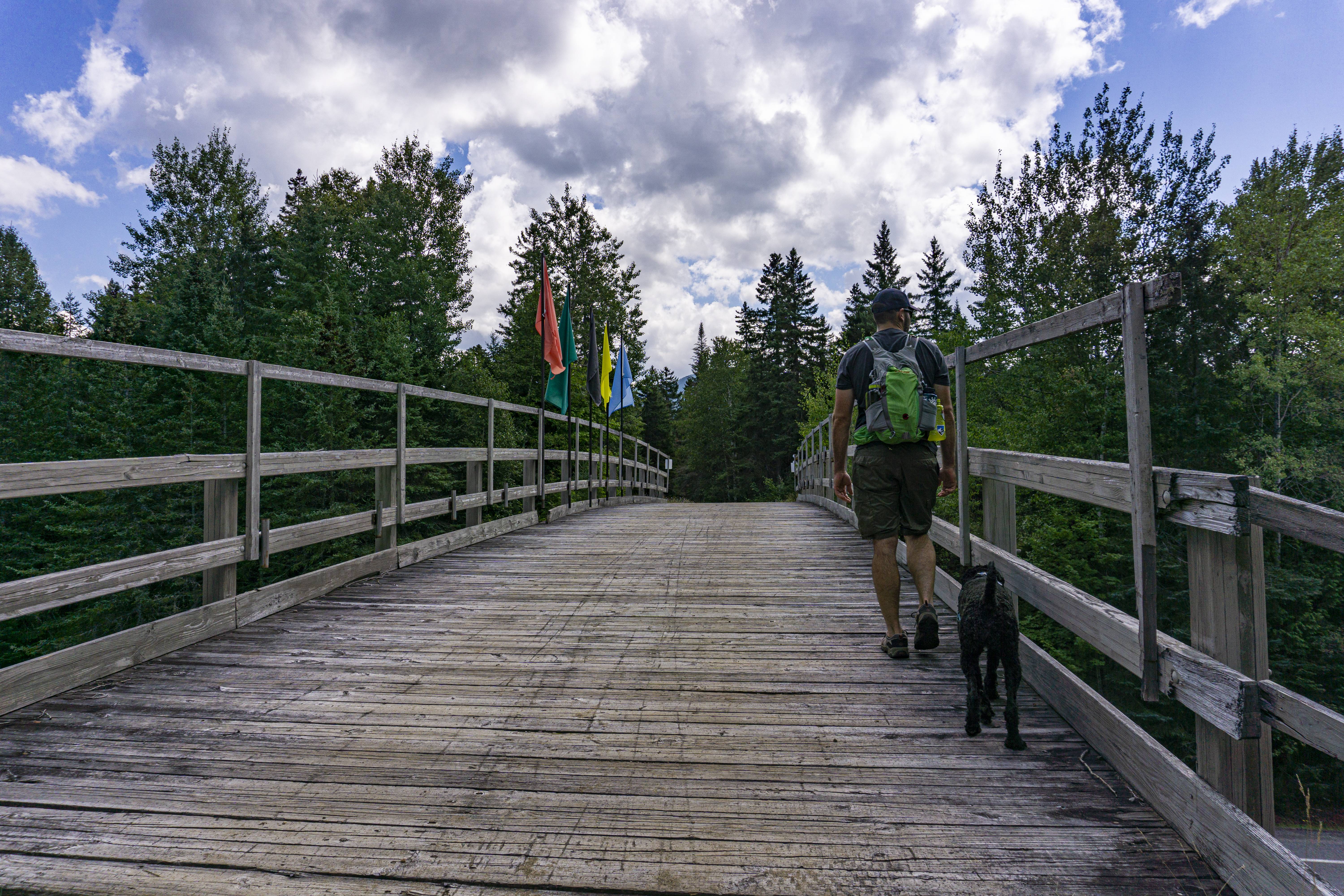 The trails are fortunately VERY well marked, and it’s very clear that hikers should follow the yellow markers all the way up. There were even distance markers every 0.5 mile. The paths were wide and grassy, and if not for the many many signs at every junction it would have been very easy to get turned around. 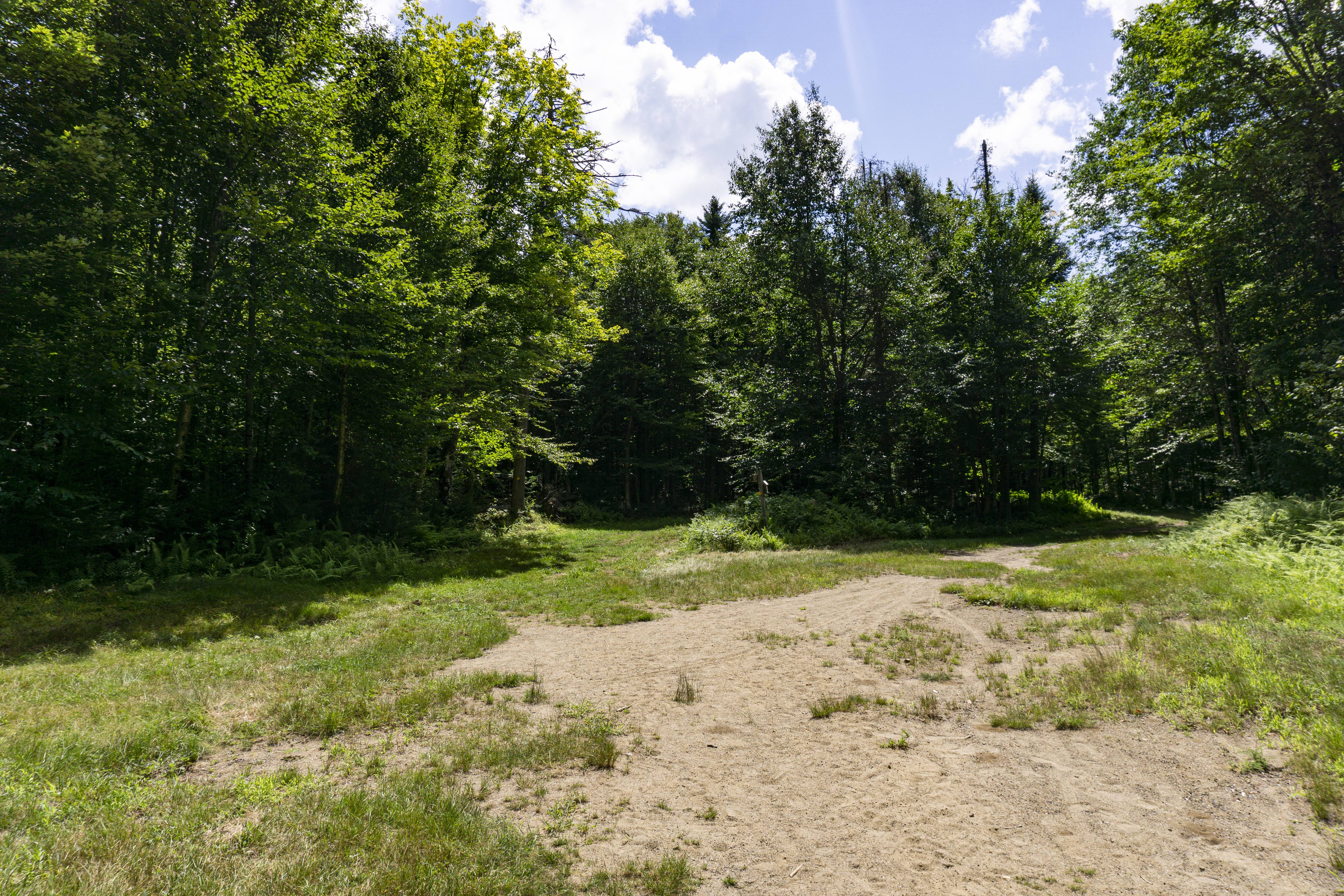 The going was very easy along these paths, almost boring, but I was just so content to be out in the mountains, smelling the wildflowers. 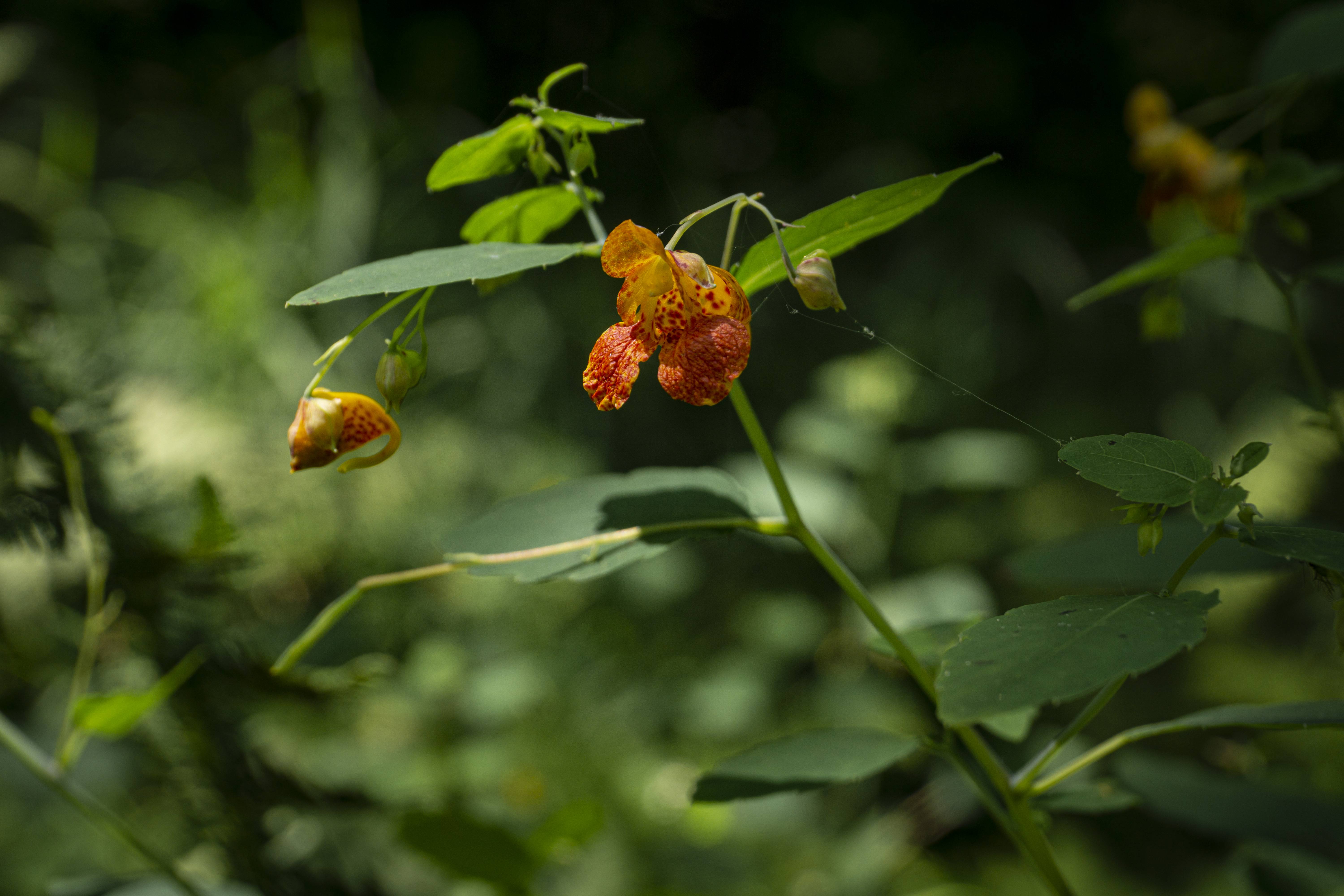 After a mile of walking, we reached the junction where the REAL trail branched off and meandered up to the summit. I love the feeling of being nestled beneath the safety of a green canopy, and felt right at home….as did Juno! 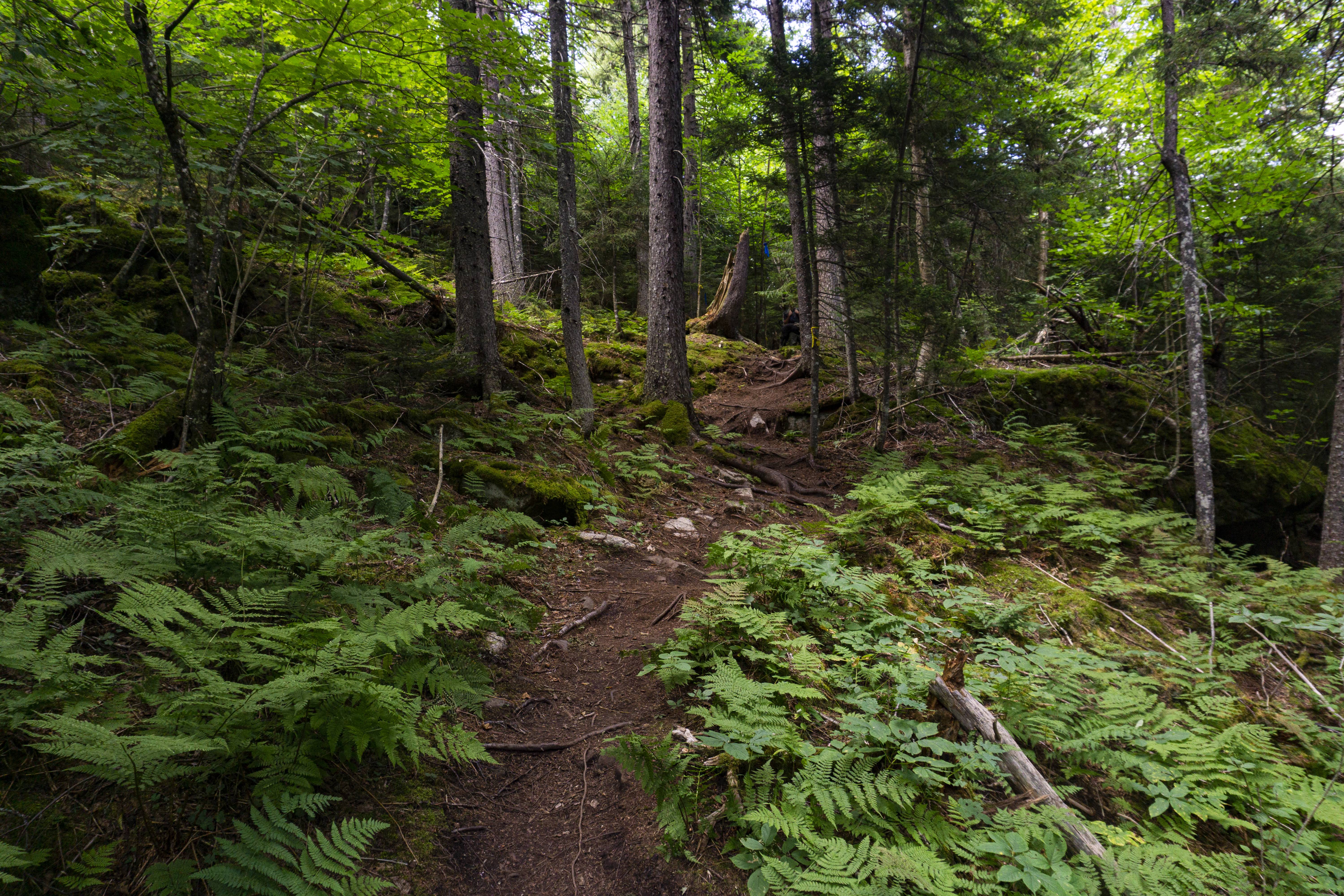 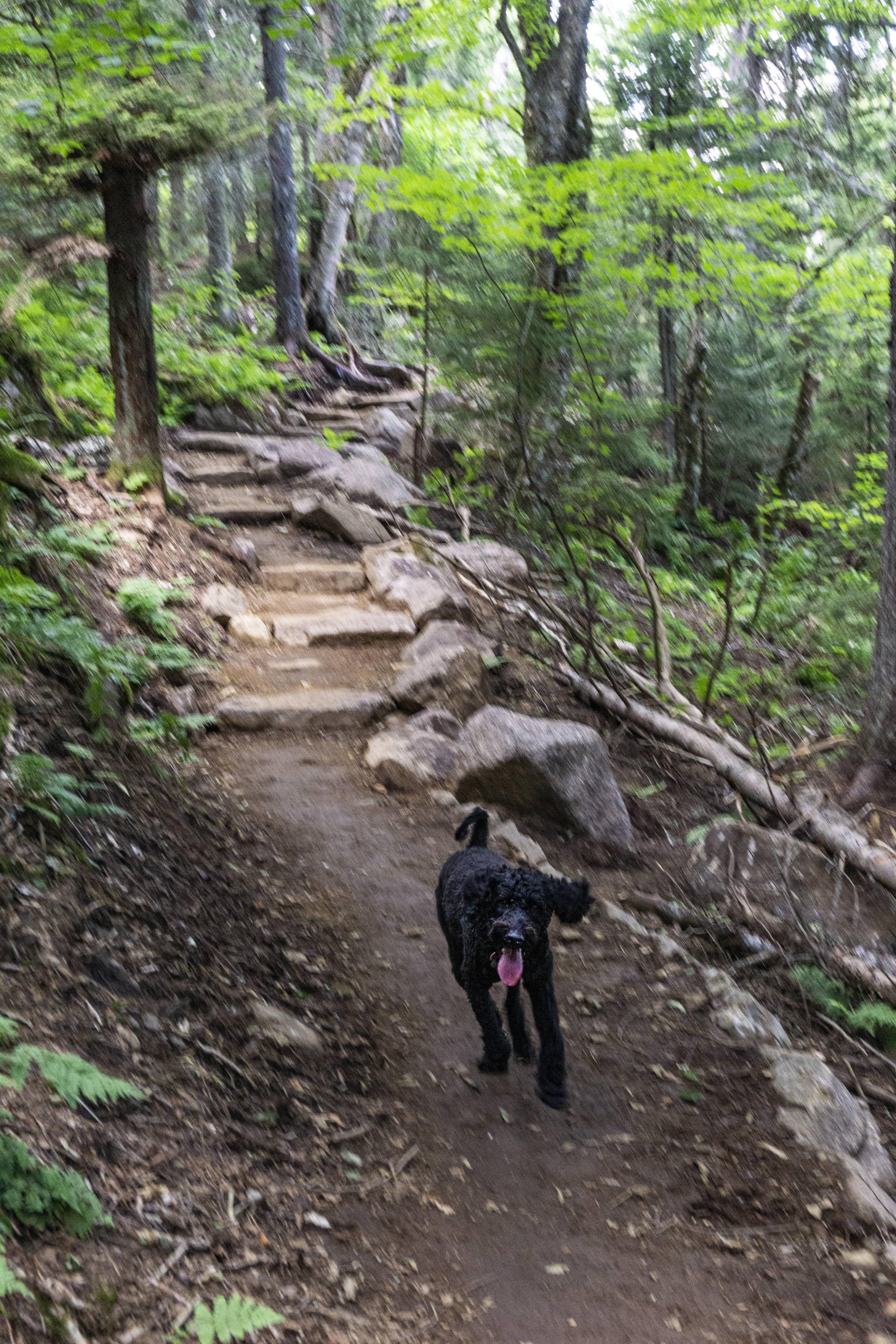 As we walked the steady switchbacks, it became very apparent that this trail is undergoing very active maintenance! It was so cool to see! We engineer nerds can’t help but to always wonder how on earth the trail crews move such large boulders and create paths….well, now we have a better idea! 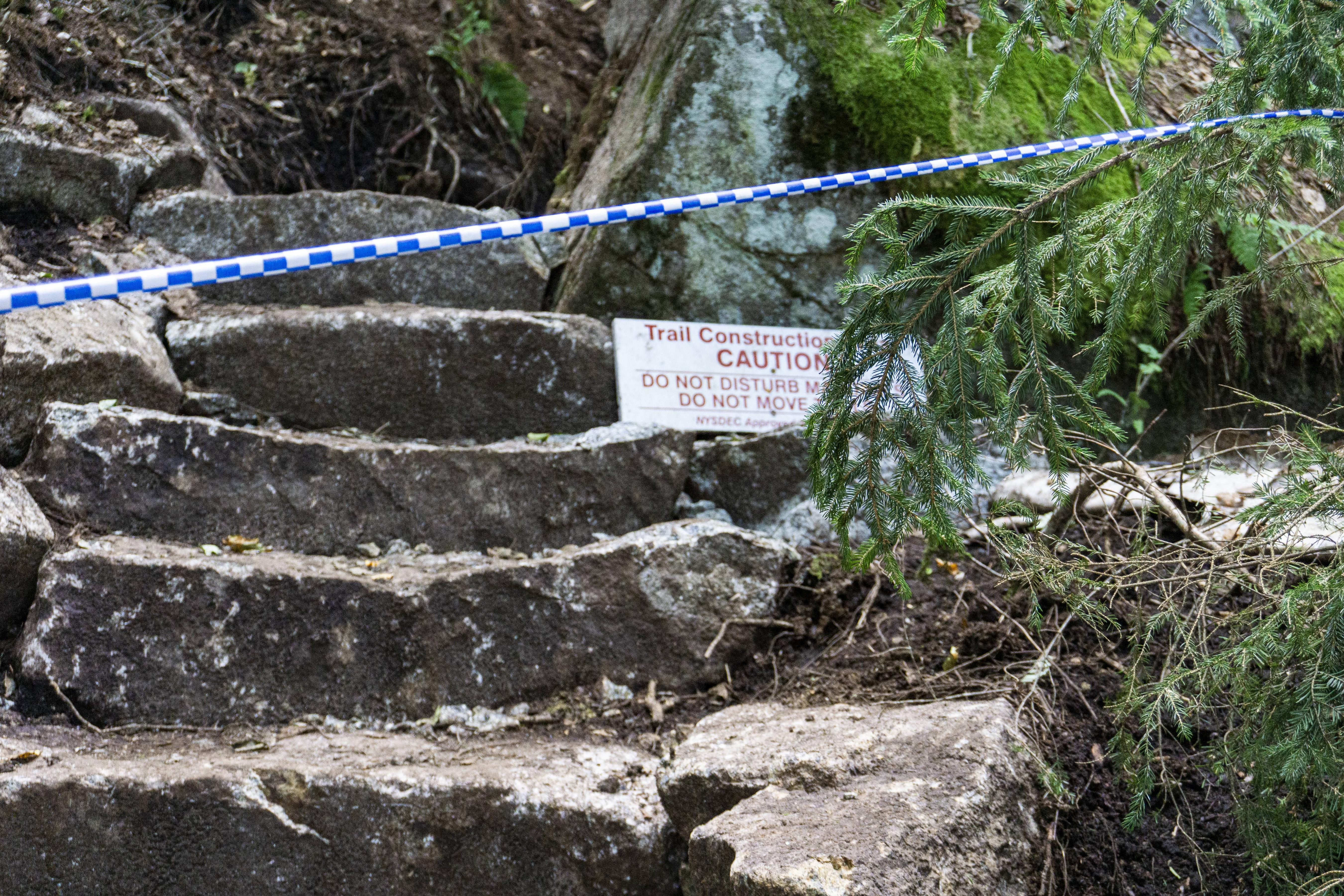 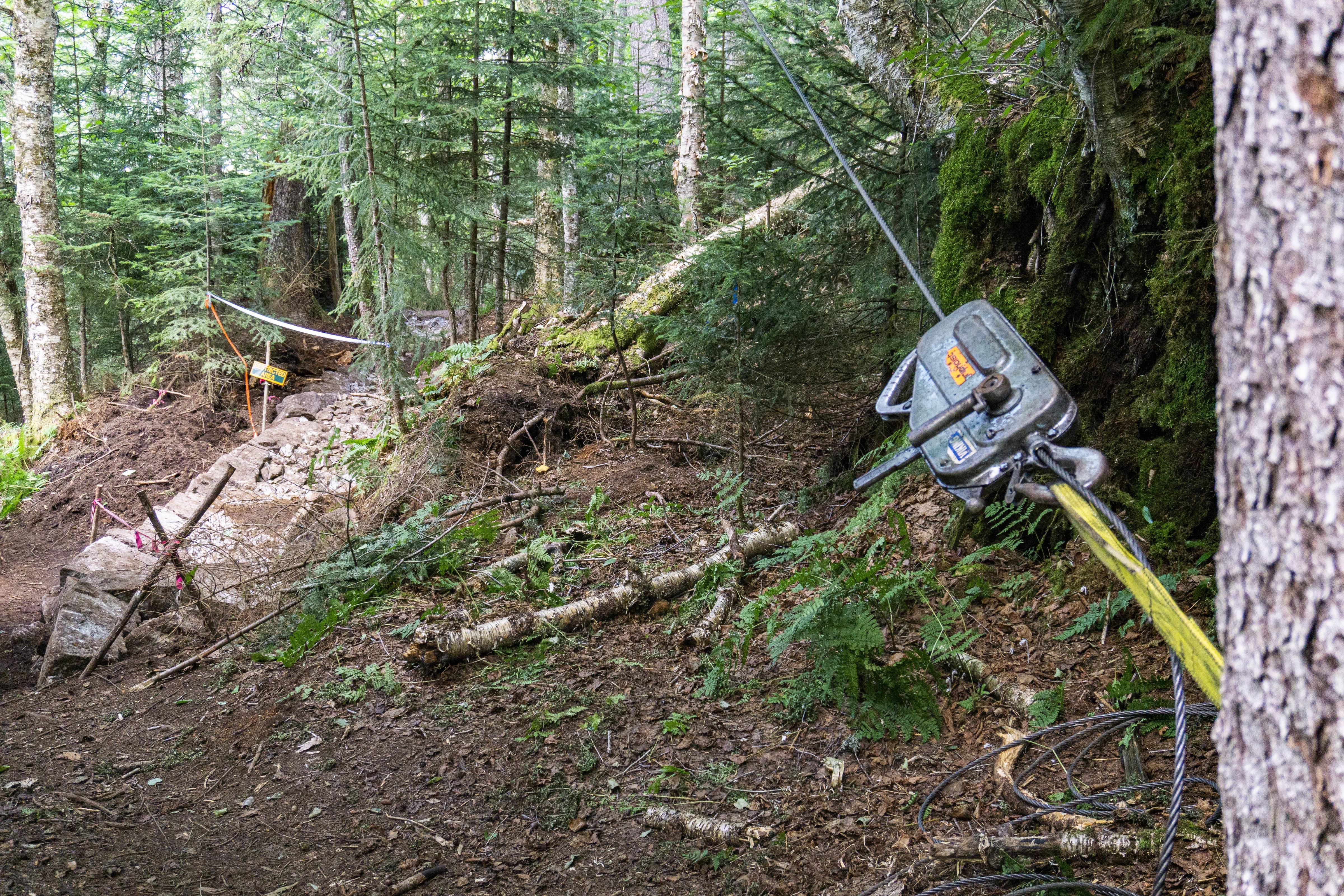 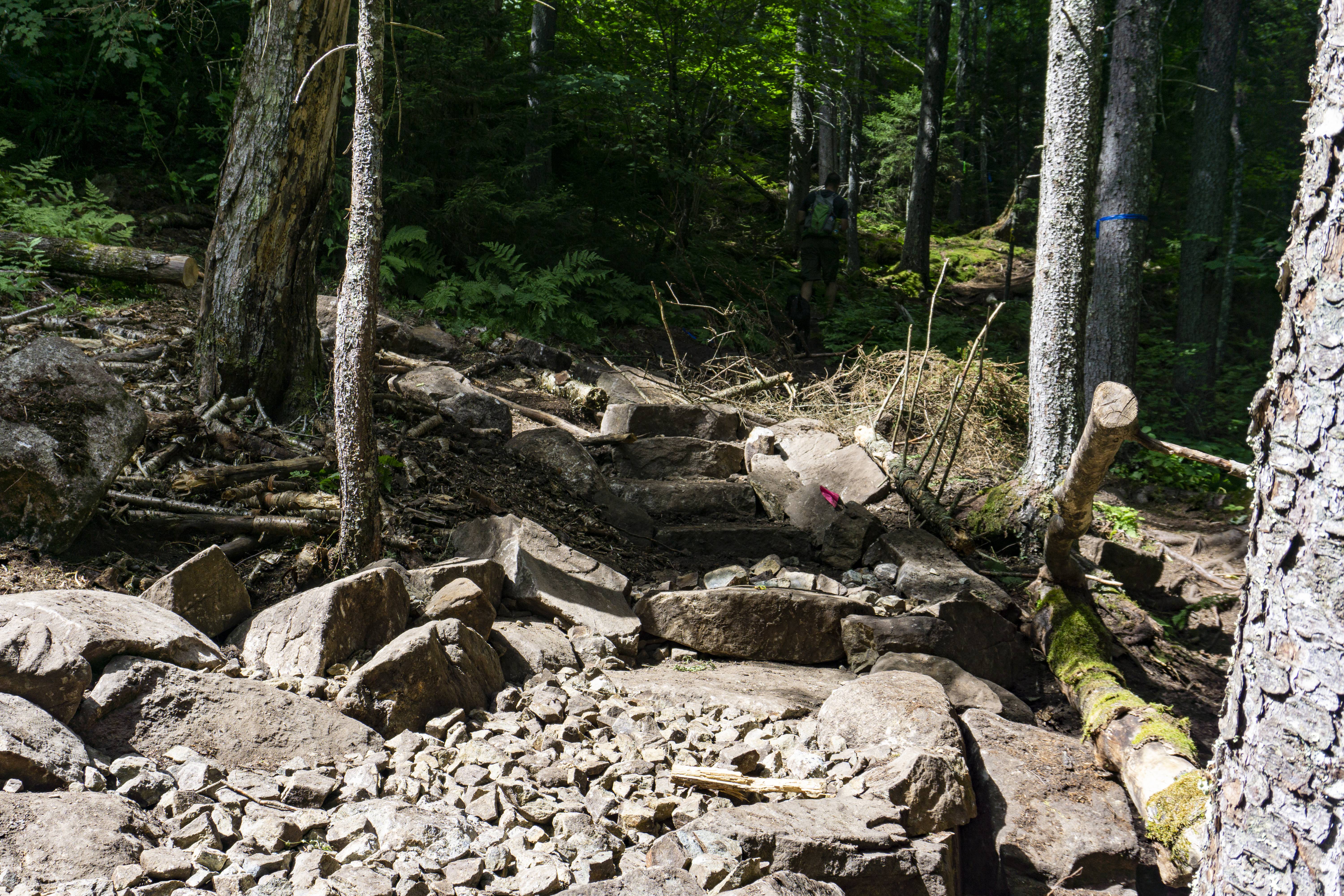 It’s going to be a great trail once they’ve finished, and I imagine it will help a ton with trail erosion. We happily walked along, and as we climbed we started seeing these great boulders with awesome caves built-in! I’m not sure why but my mind always says “Yeah, we could hide in there!” 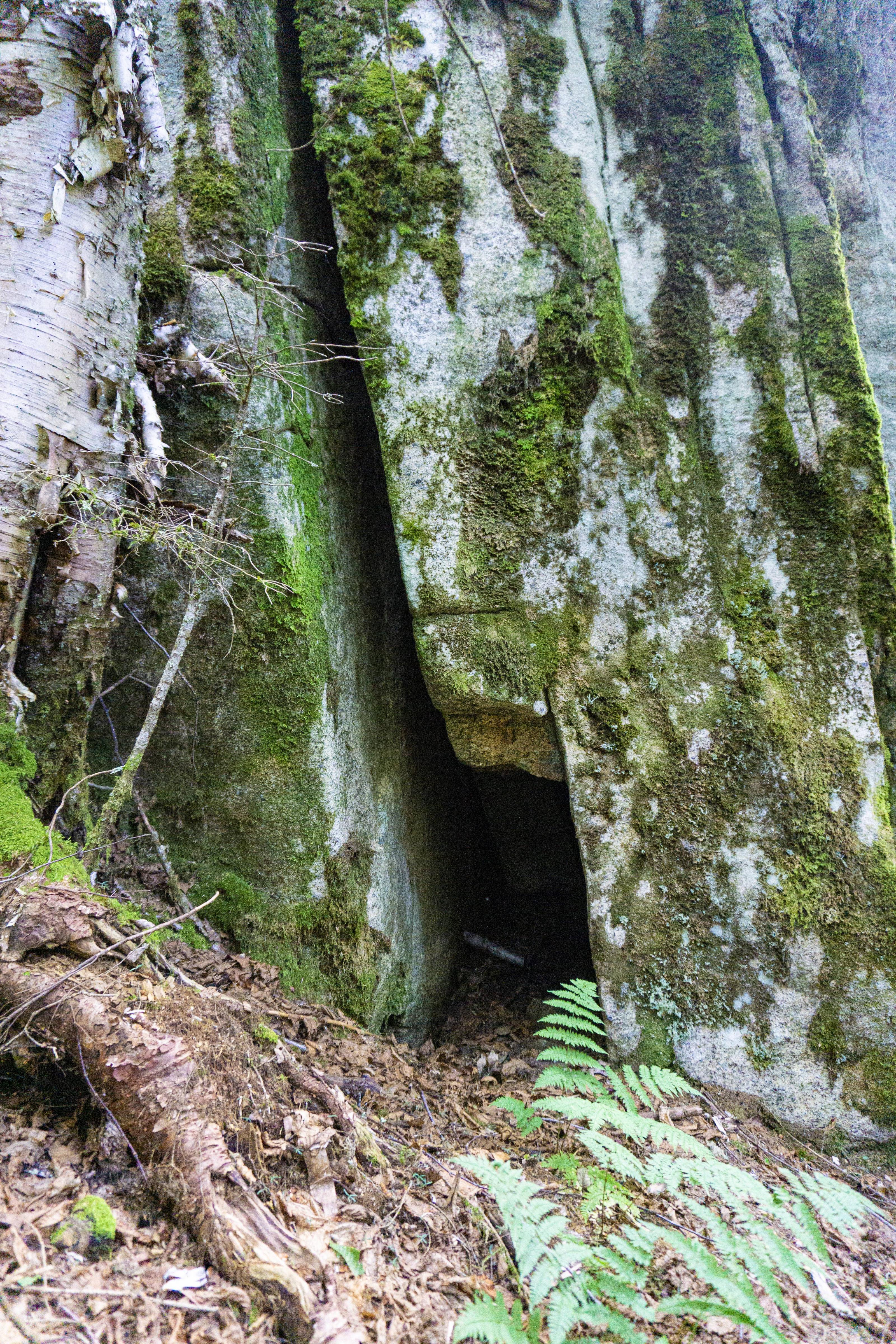 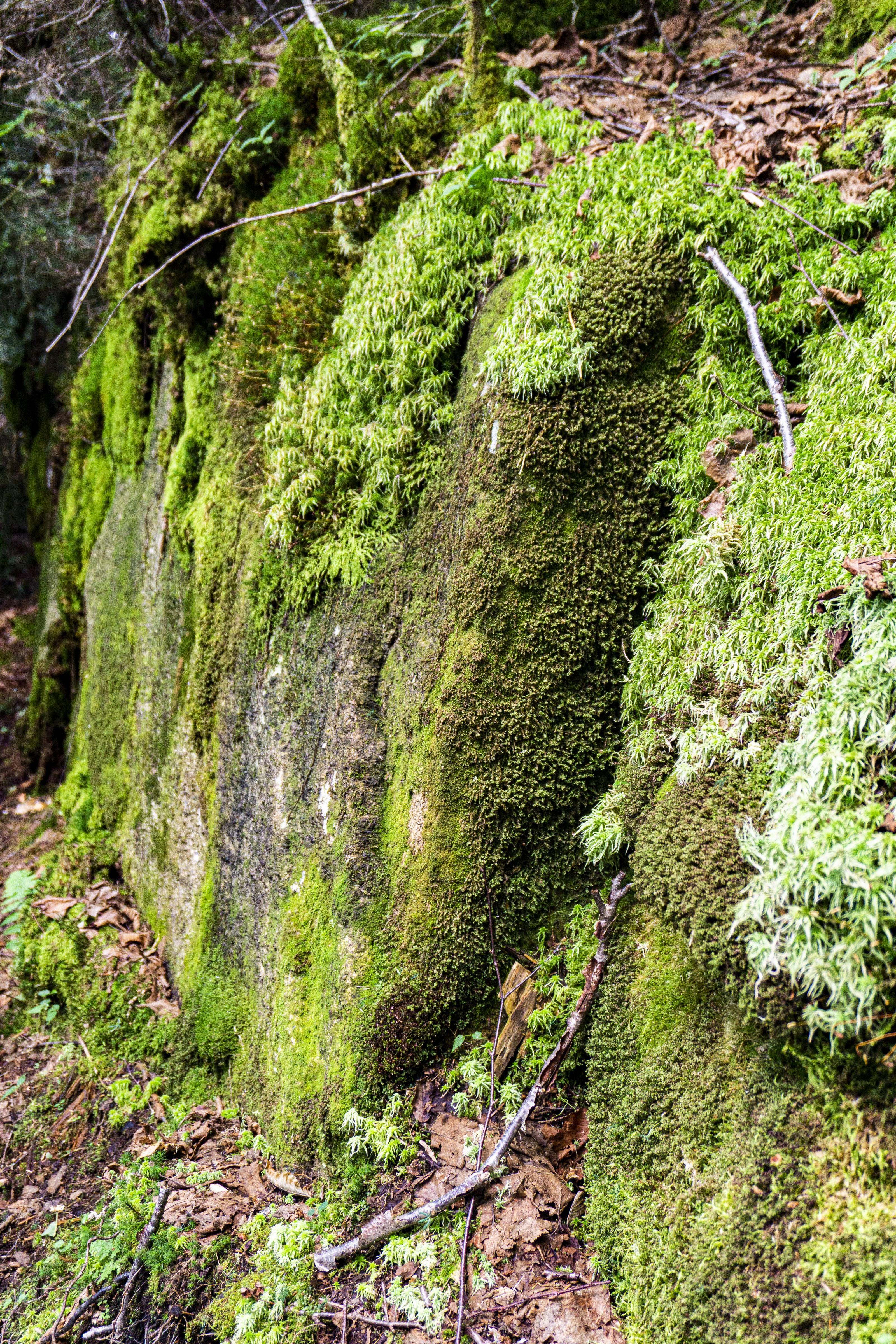 On our way up we passed only a handful of people coming down. Before we knew it we were at the first incredible lookout with a pair of women sitting and enjoying the peaks. 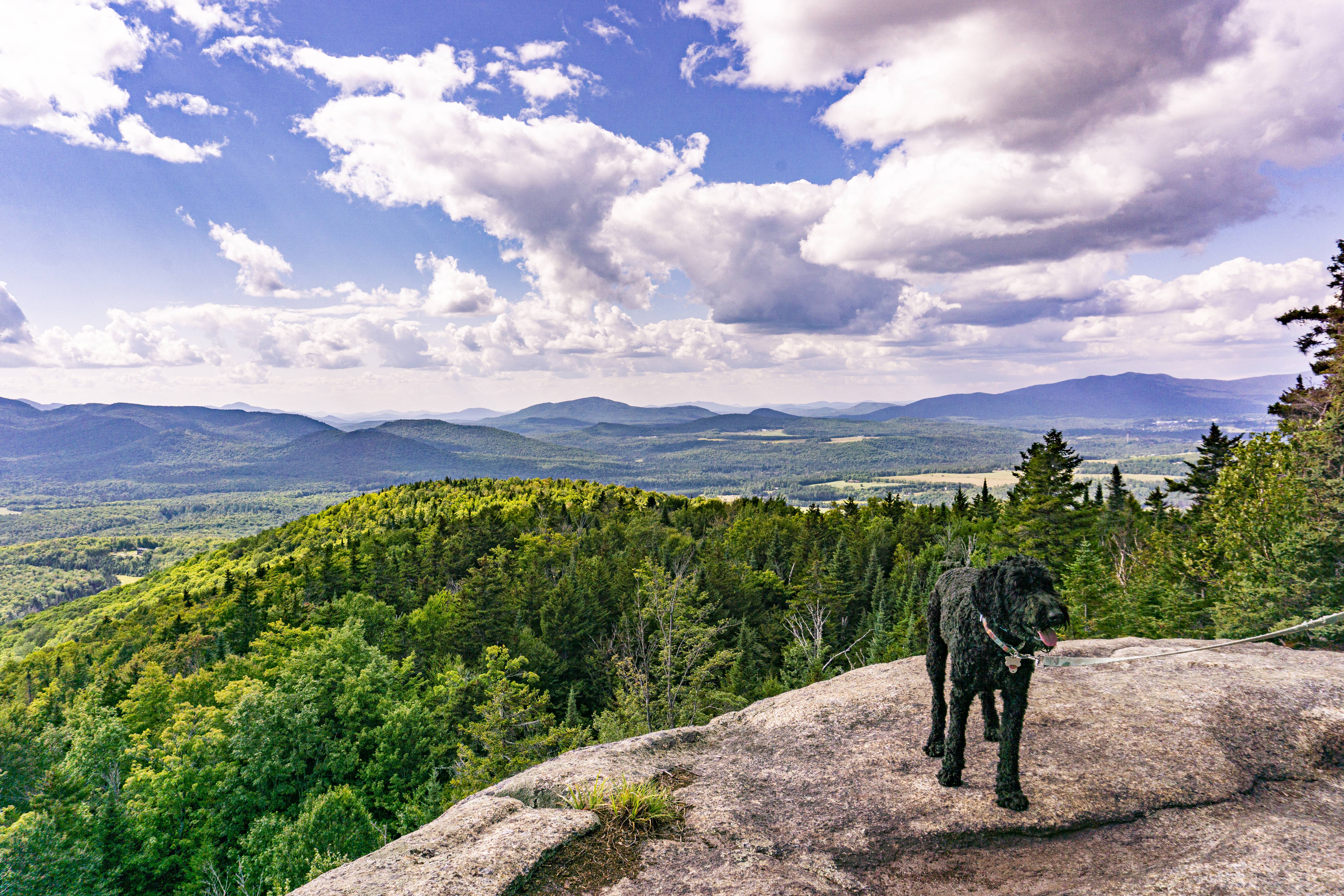 We chatted for a few minutes before hopping back onto the trail toward the true summit. Just a hop and a skip and we were approaching the next clearing, this time with a sign: 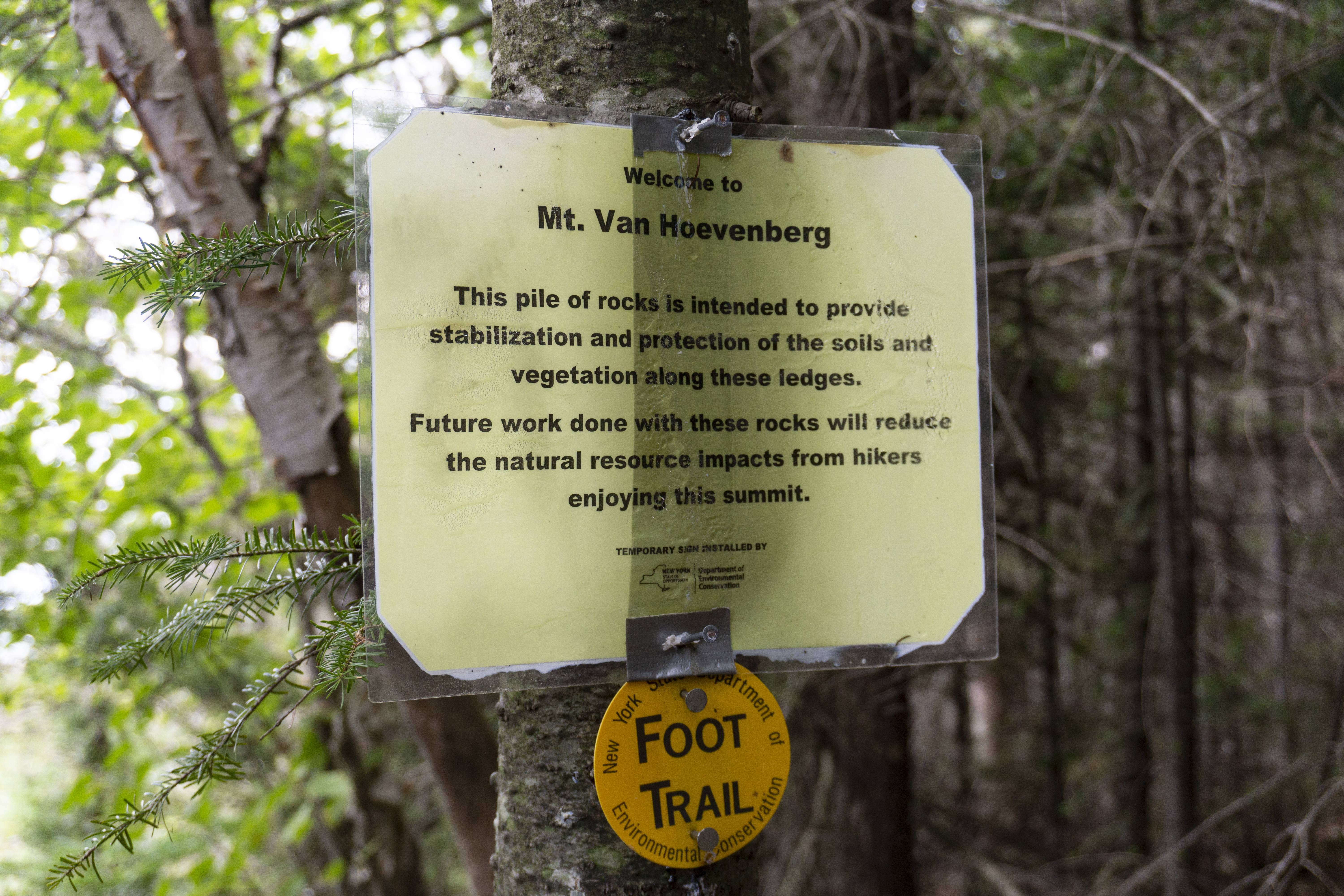 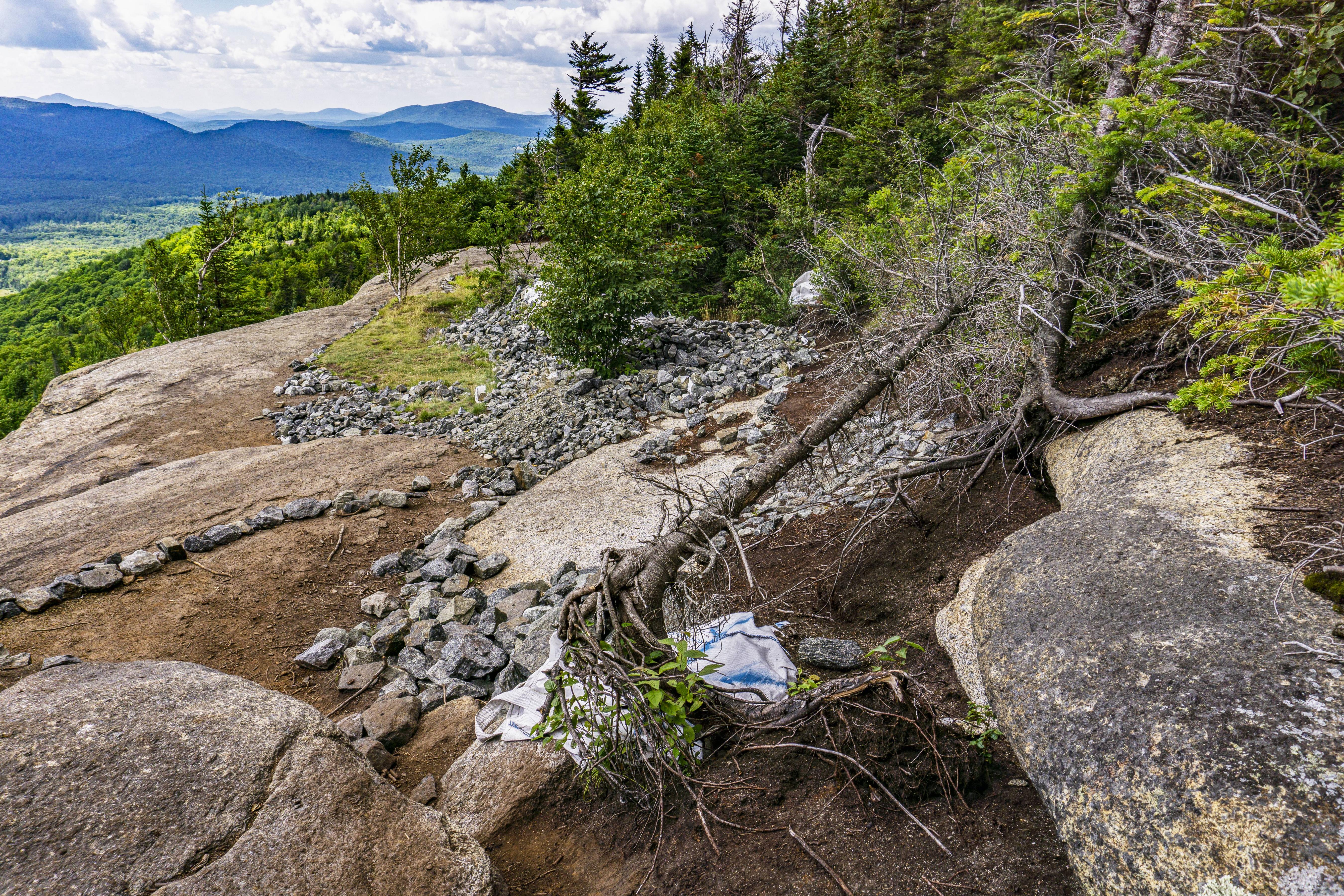 So cool! I hope that someday I will be able to volunteer on a trail crew to help maintain these trails that I love so much! Plus, I just really wanna know how they do everything 😀 For some reason, we weren’t quite sure that this was the summit (to the best of my knowledge, it was) so we kept going ahead, past another overlook, and back into the woods. At some point I noticed we were now following blue markers and were heading somewhat downhill, so we turned around and settled in at the last viewpoint we had passed. 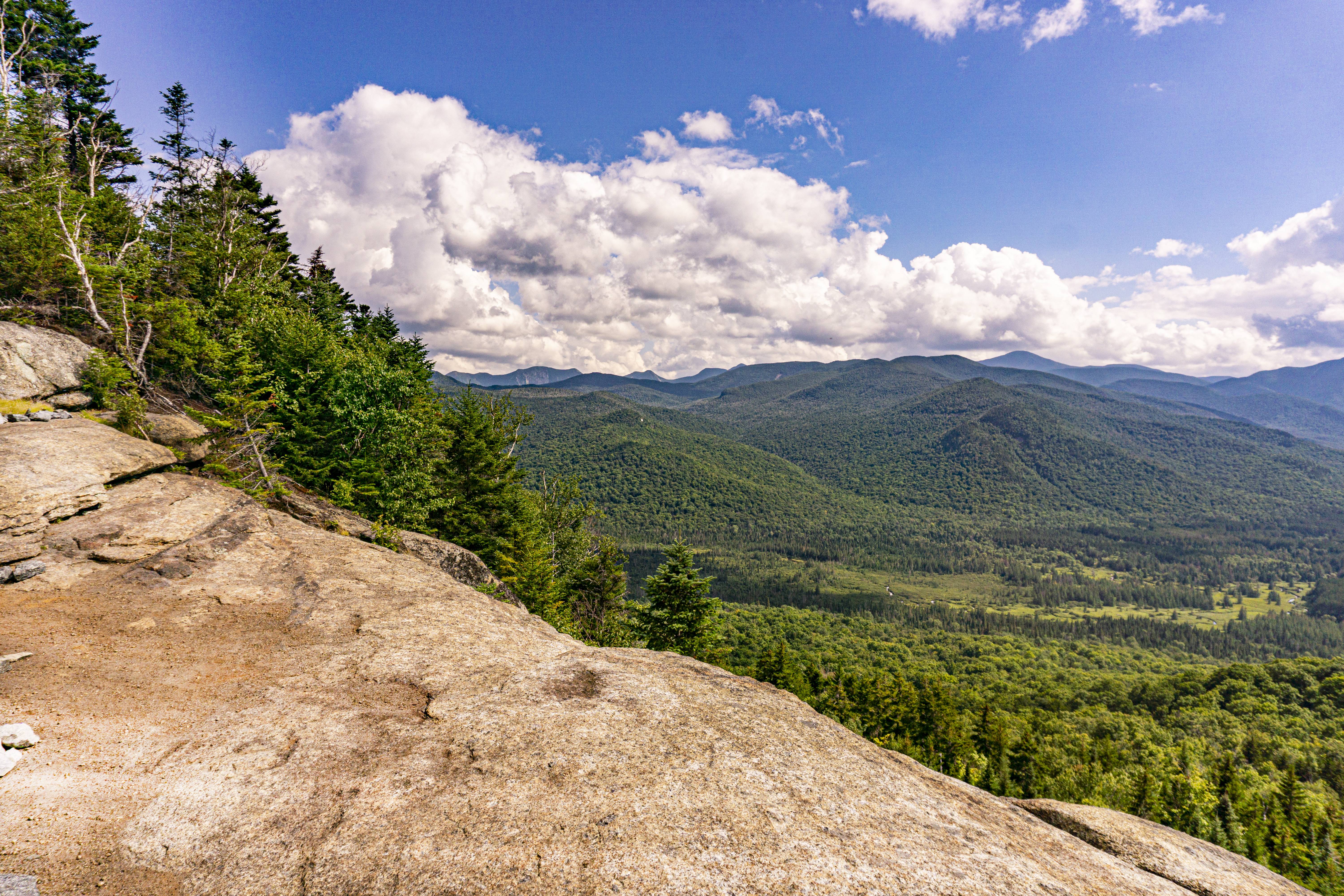 Check out Saddleback and Basin in the image above! They’re almost exactly in the center of the image, you can see a big saddle-like dip in between the two peaks…Yep, can’t wait to haul my carcass up those high peaks! As ready as I was for my lunch and of course my VICTORY CHOCOLATE, I was super excited to try out an app that I recently put on my phone. It’s called PeakFinder, and it’s not very easy to use, but it identifies all of the visible peaks on the horizon! 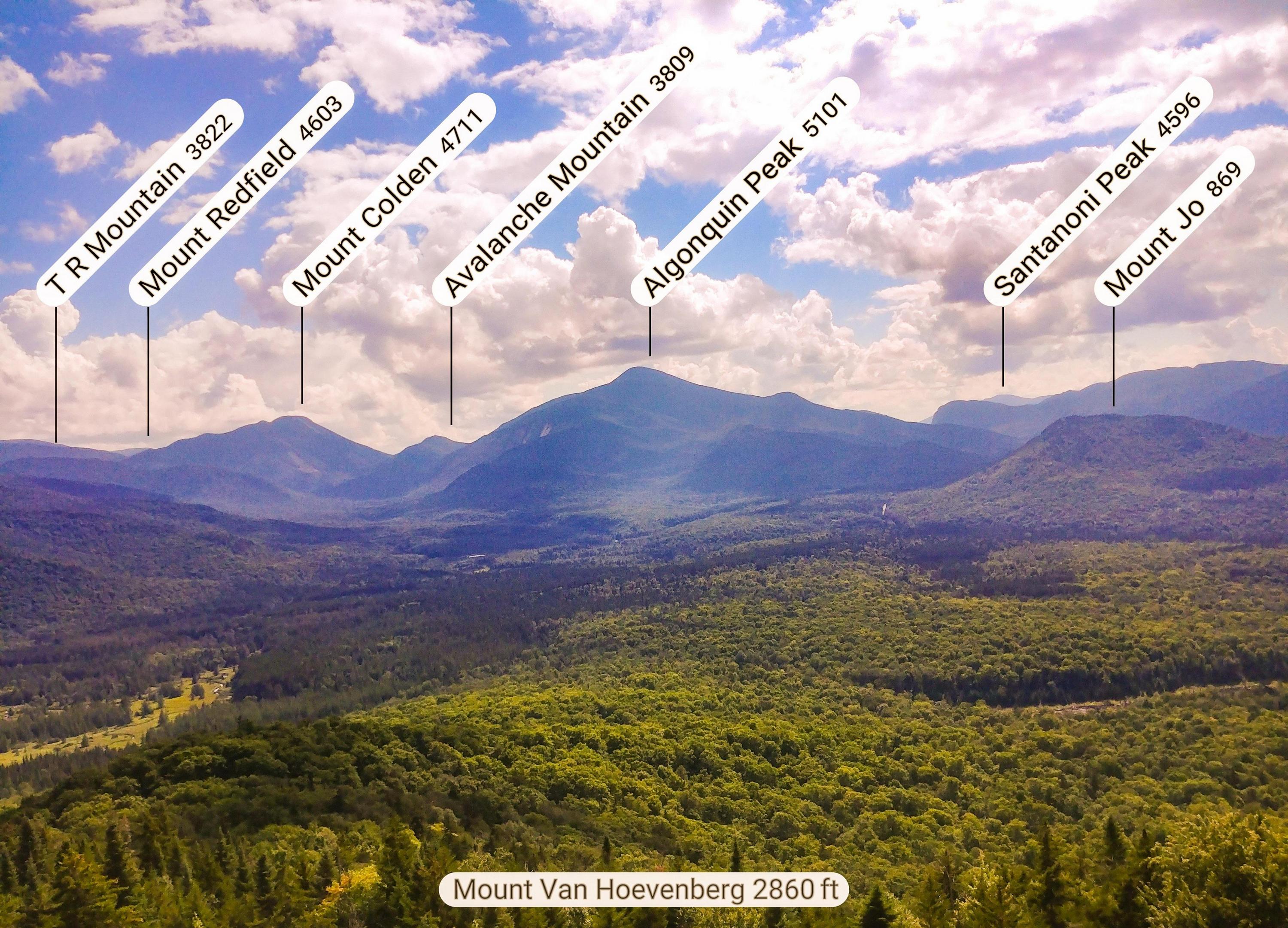 I fiddled around with that for quite a while, and enjoyed the knowledgeable feeling I had when a few people from out of state asked which peaks we were looking at and I could answer them! We could even see the ski jumps in Lake Placid. 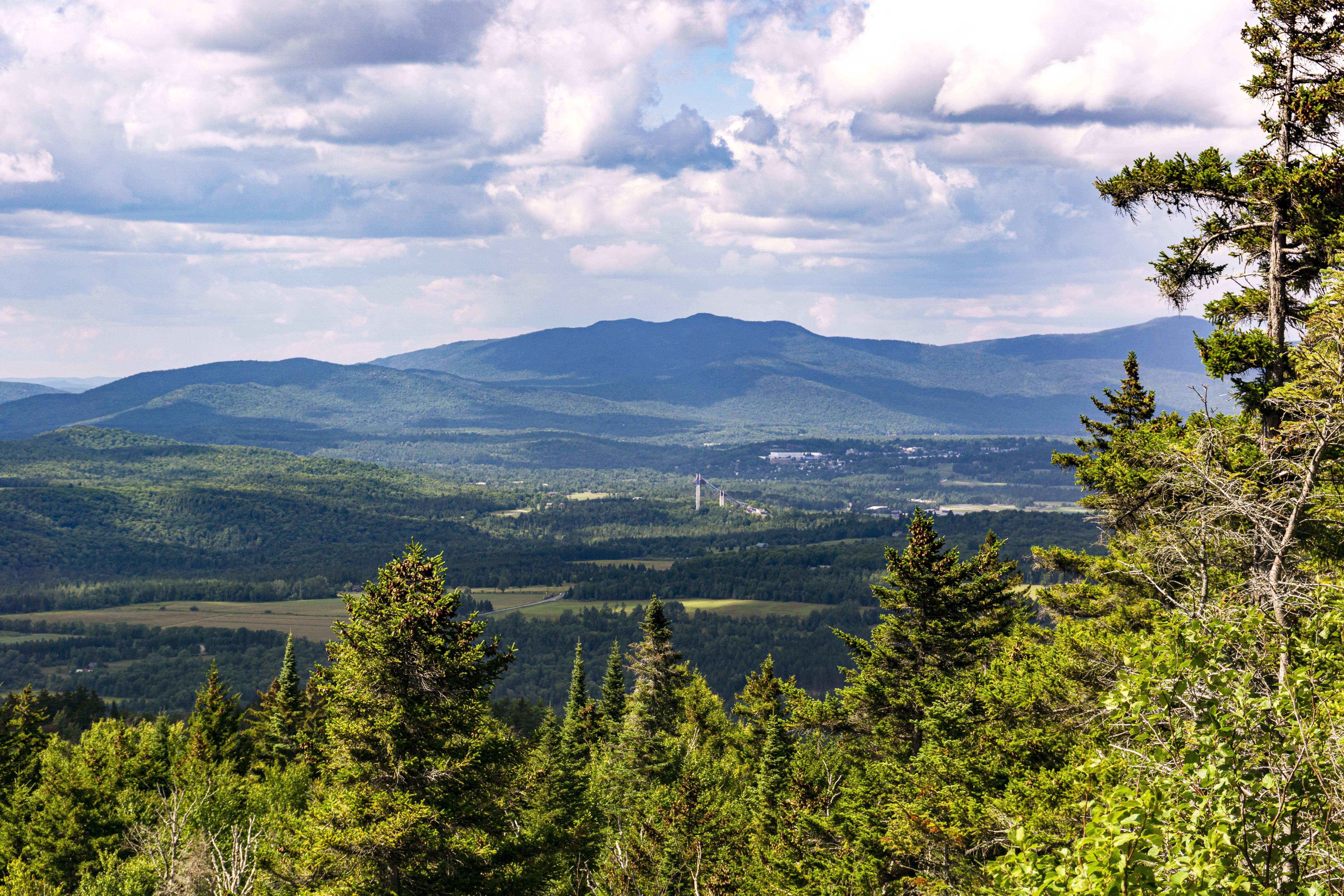 I can’t believe this little mountain doesn’t get more attention. The climb up couldn’t have been easier and the sights were breathtaking. 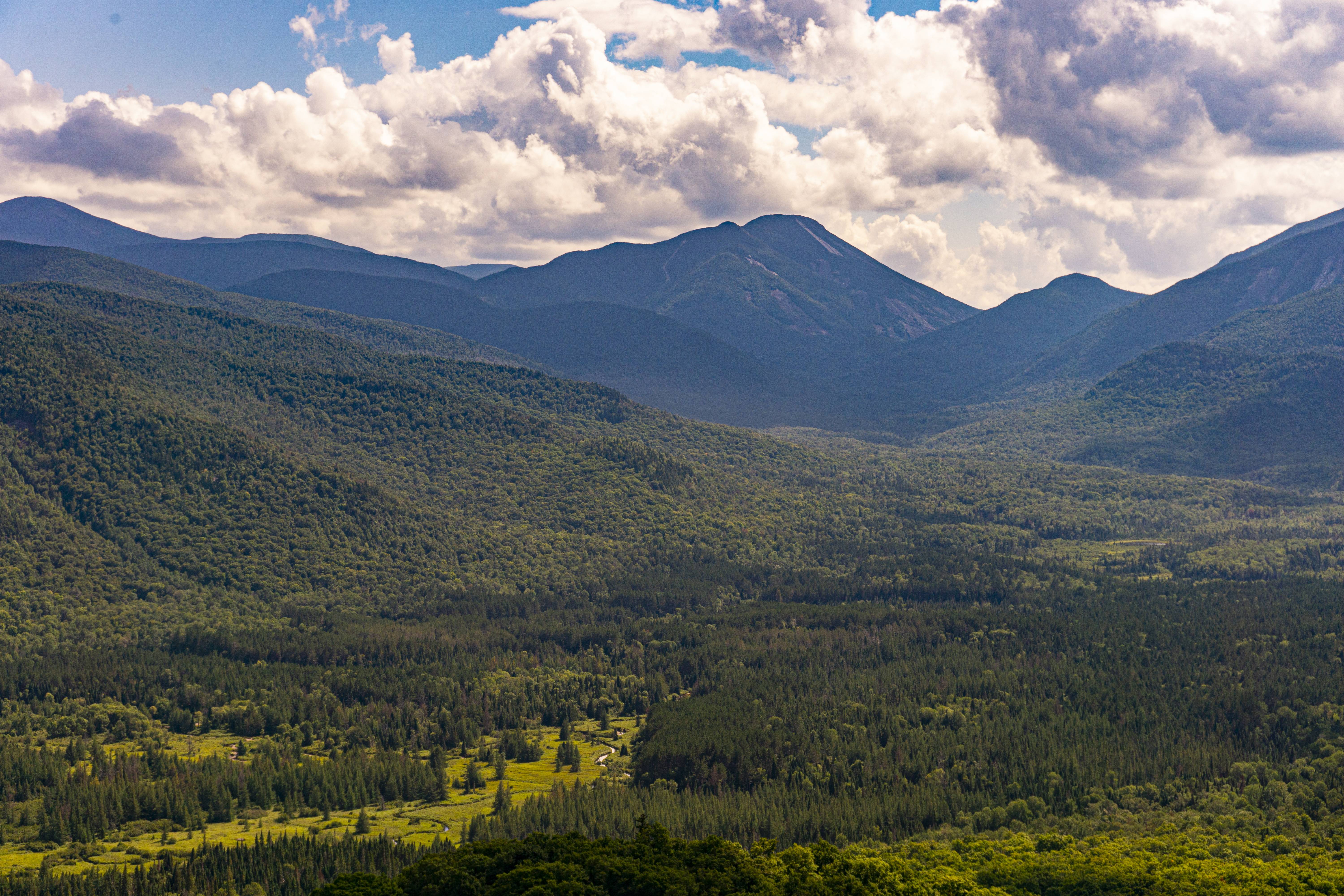 We were in no rush as we enjoyed our sandwiches and stretched our bones. Juno, however, was not too happy with us; we tied her to a tree because she kept STICKING HER SNOUT OUT OVER THE CLIFFS. This is why she doesn’t go up high peaks with me anymore! Kids these days… 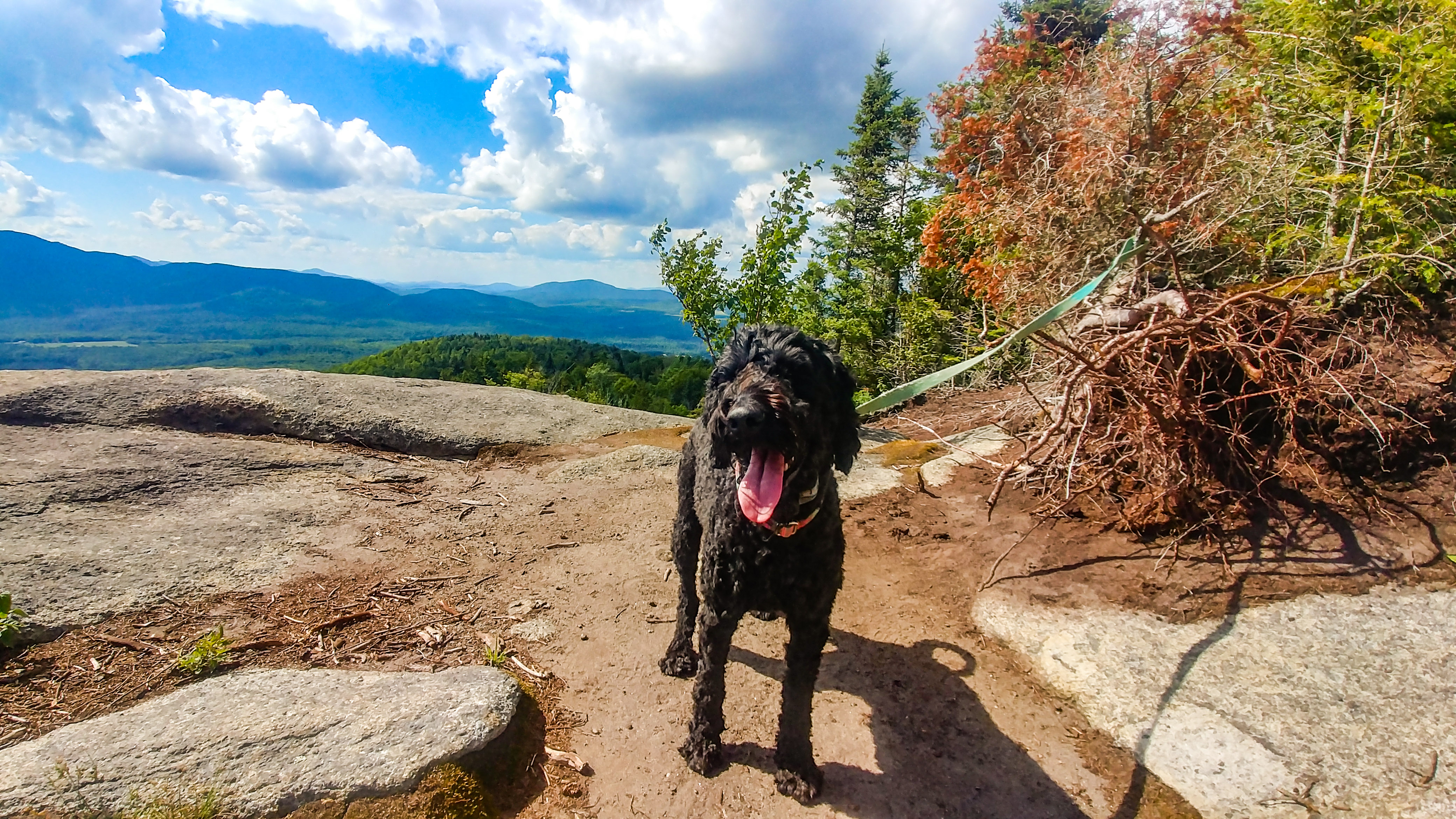 As much as we enjoyed the summit, we began to grow weary of the sun beating down, so we packed up our things and headed back the way we came, stopping for a few last photos of course. 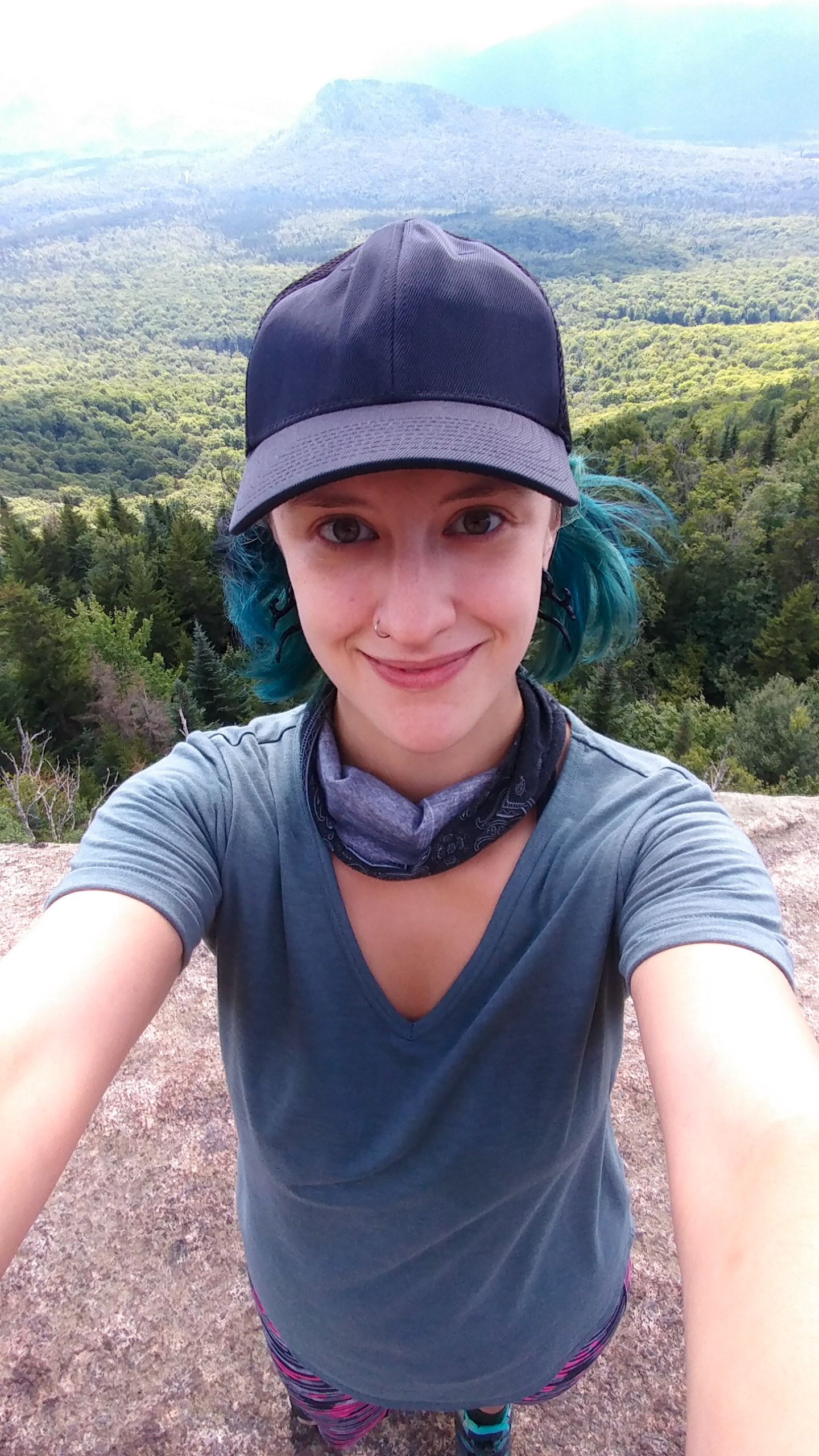 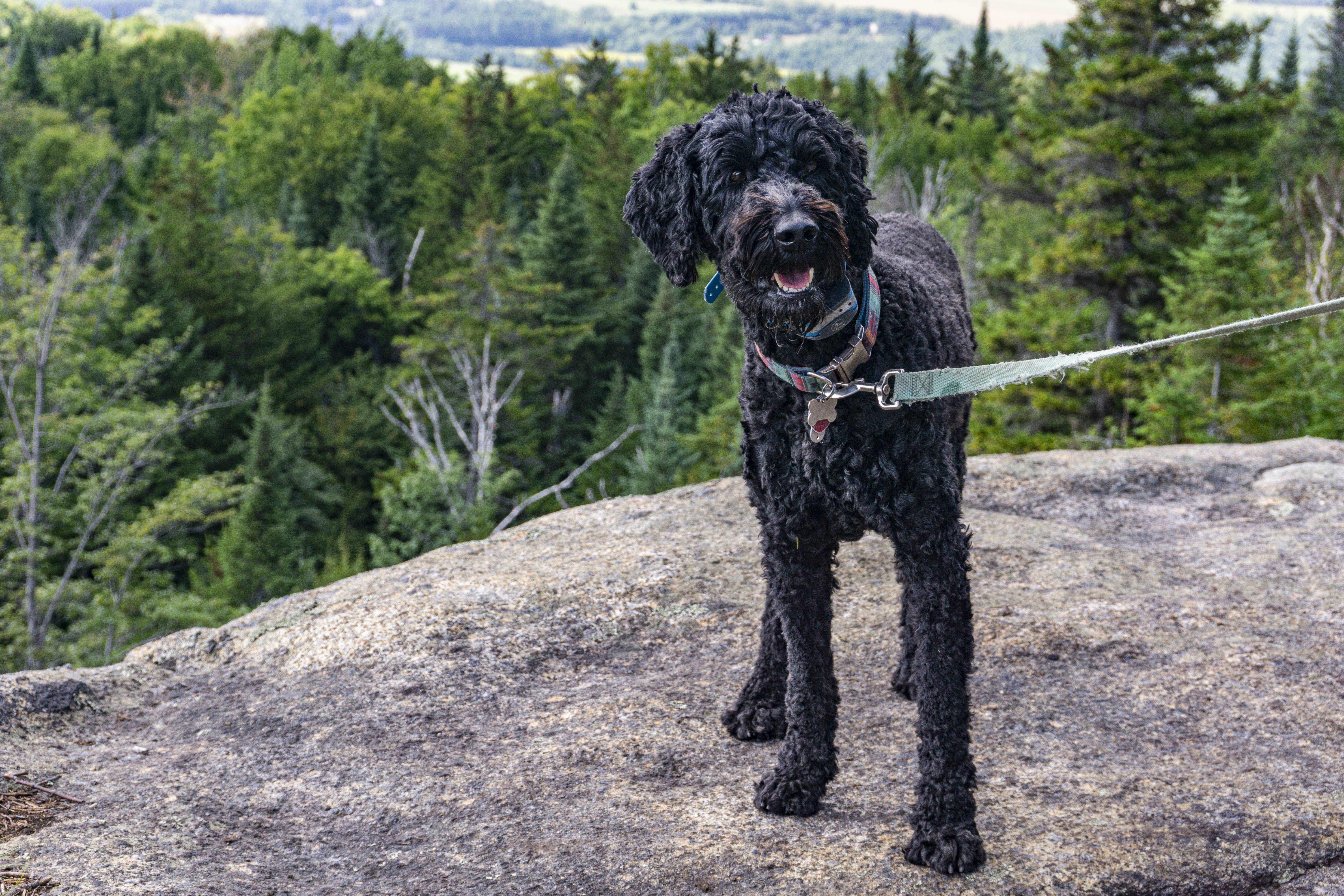 The descent was gentle, and I relished feeling no pain in my knee or hip….just some in my back, but hey, I’ll take what I can get, I’m an old lady now! 🤣 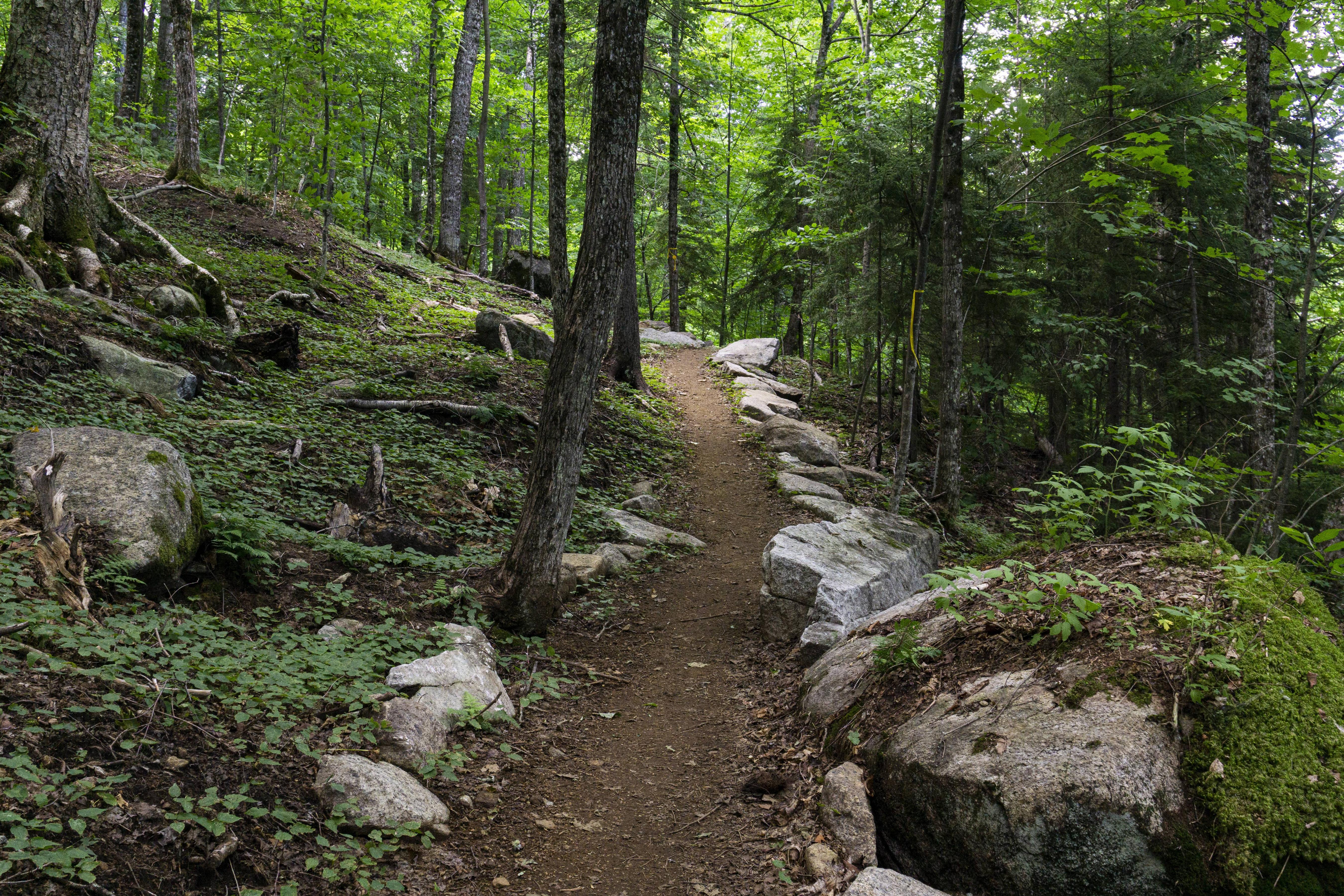 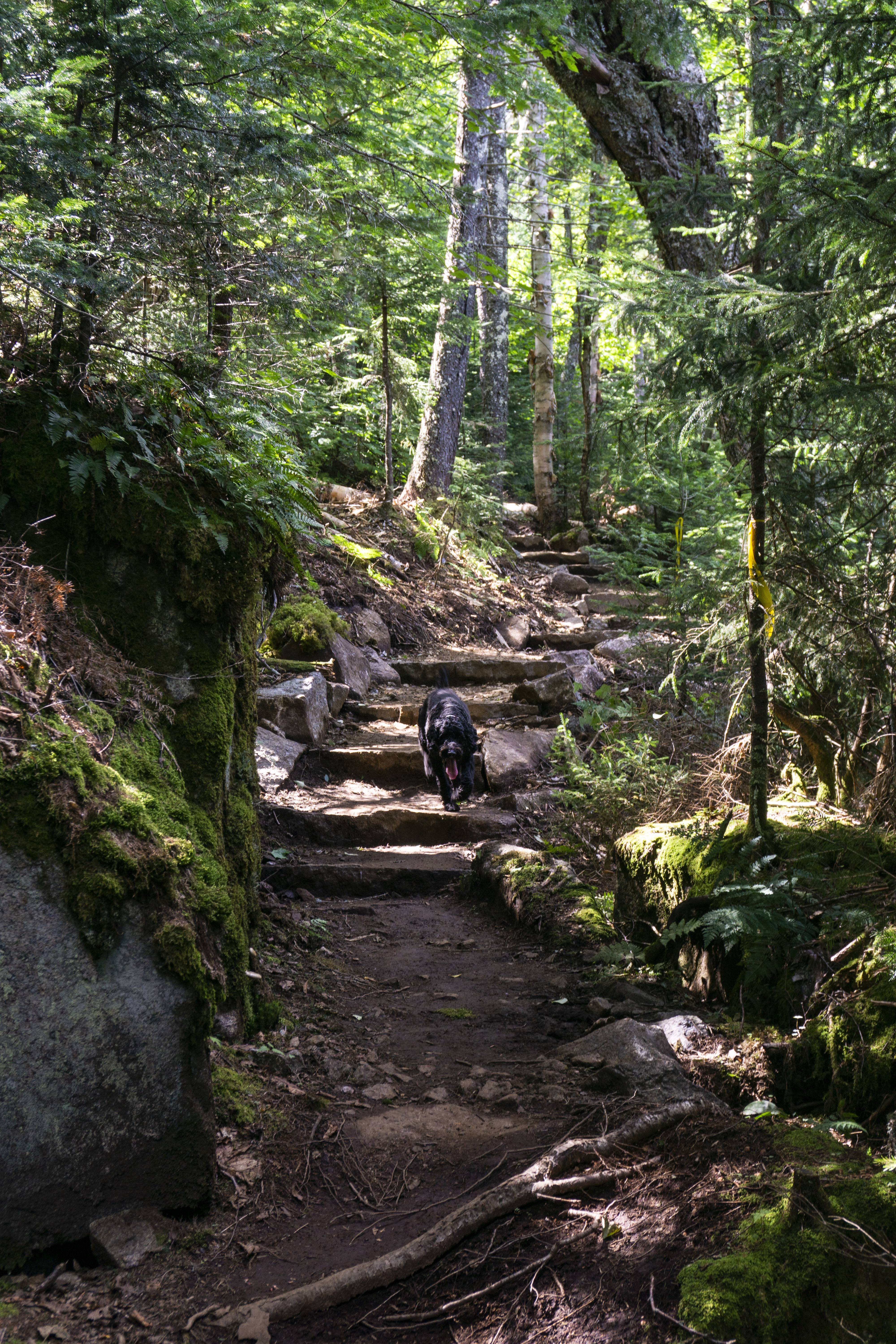 Just a few minutes later we were back at the wide ski trails heading downhill toward the ski center. I was kind of dreading this part a little bit because it is pretty boring; it’s not what you think of when you think of hiking in the ADKs….That is, until we realized that the trails are lined with red raspberry bushes the whole way down! So obviously we really took our time and snacked during the whole descent – Juno included. Sometime in the last few months, after watching me forage for berries, she learned how to forage too, and now I can’t keep her away from them. 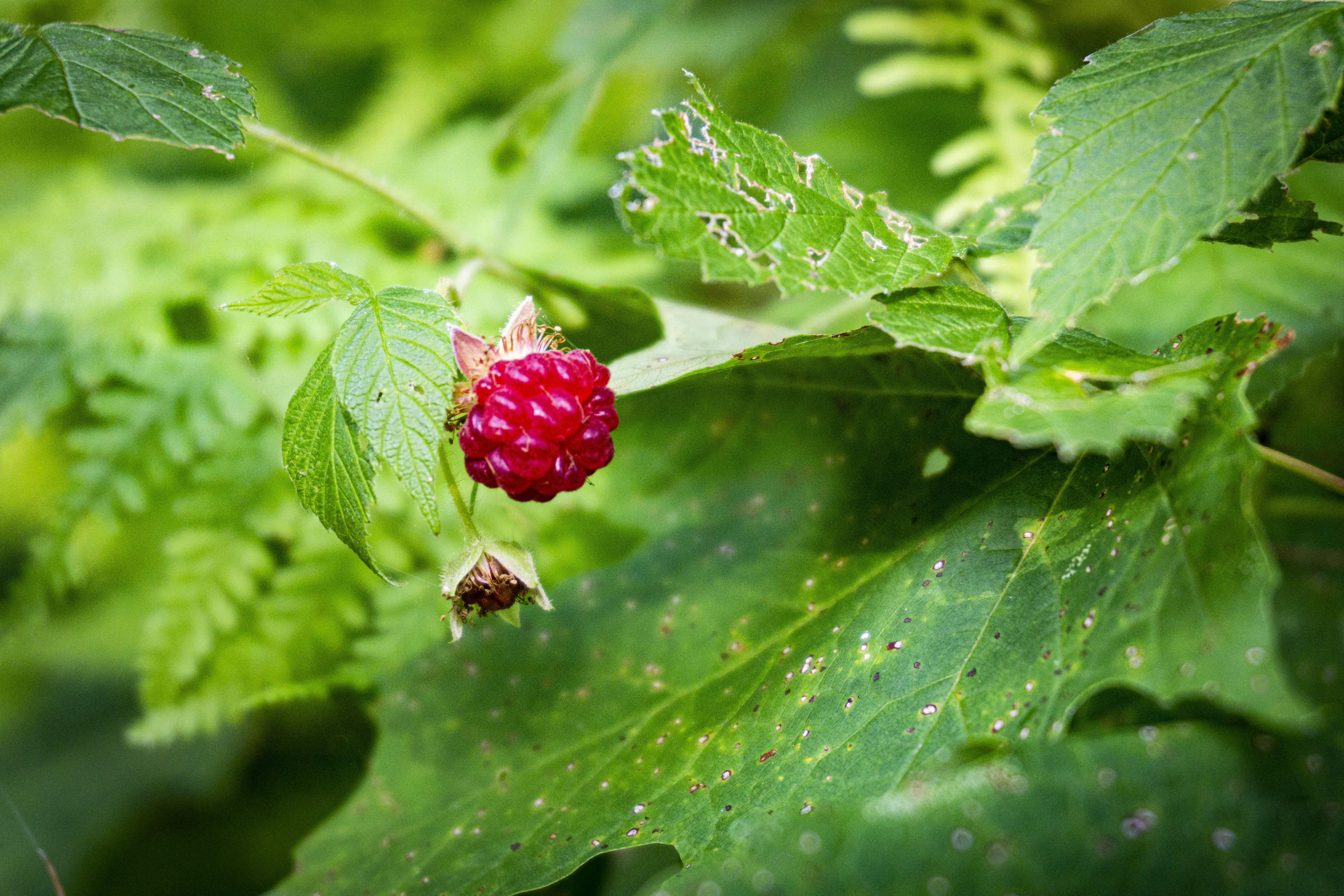 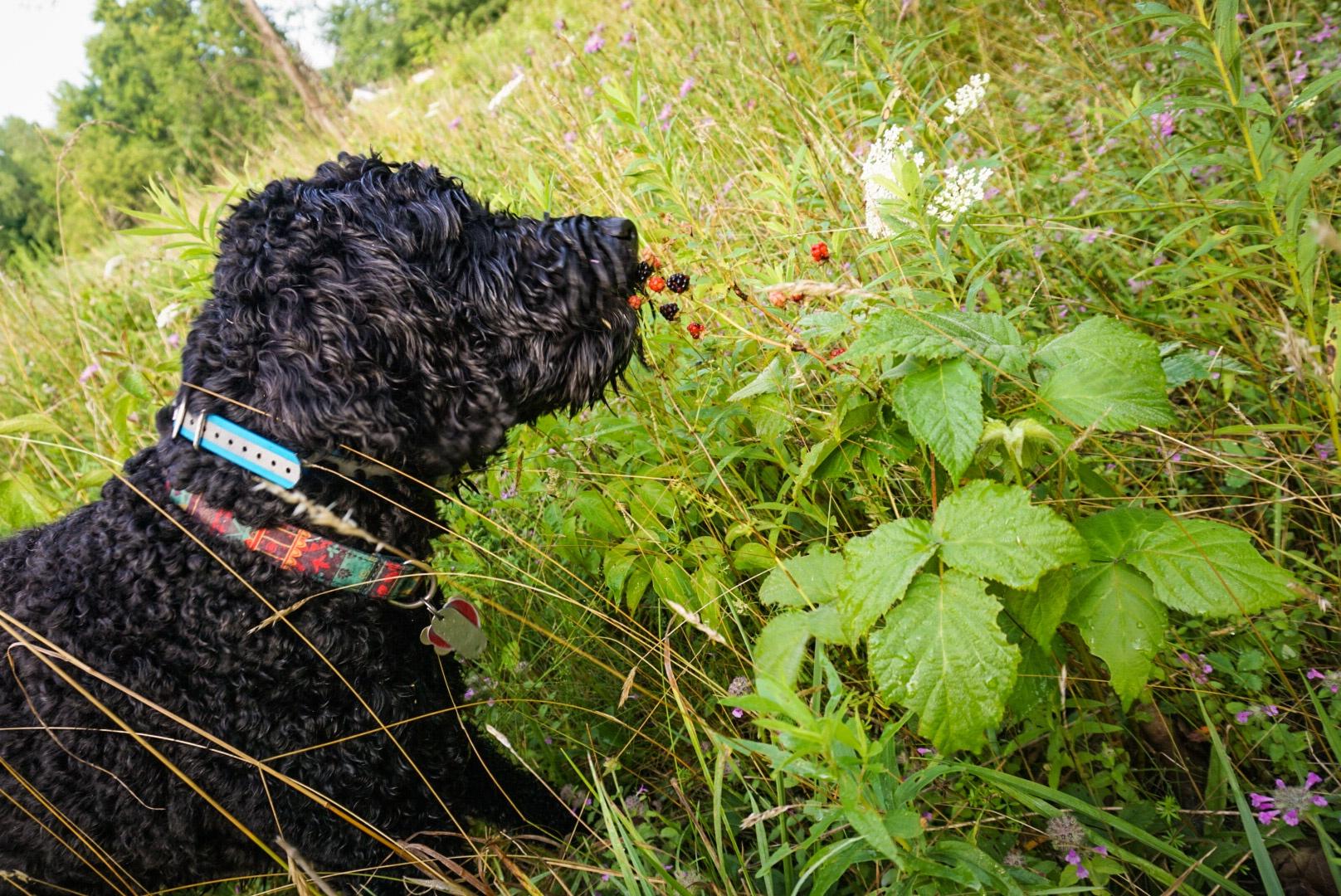 The photo above was taken on our regular walking trails, not on this hike, but you get the idea.

We made it back to the car at about 5pm and wasted no time in packing up and heading down Rt. 73 to the Cascade Lakes to take a refreshing dip before driving the 3 hours back home. And OF COURSE we stopped for Stewart’s pizza and ice cream before heading back, what kind of hikers would we be if we didn’t?! (Campfire S’moreo, in case you were wondering 😉 ) 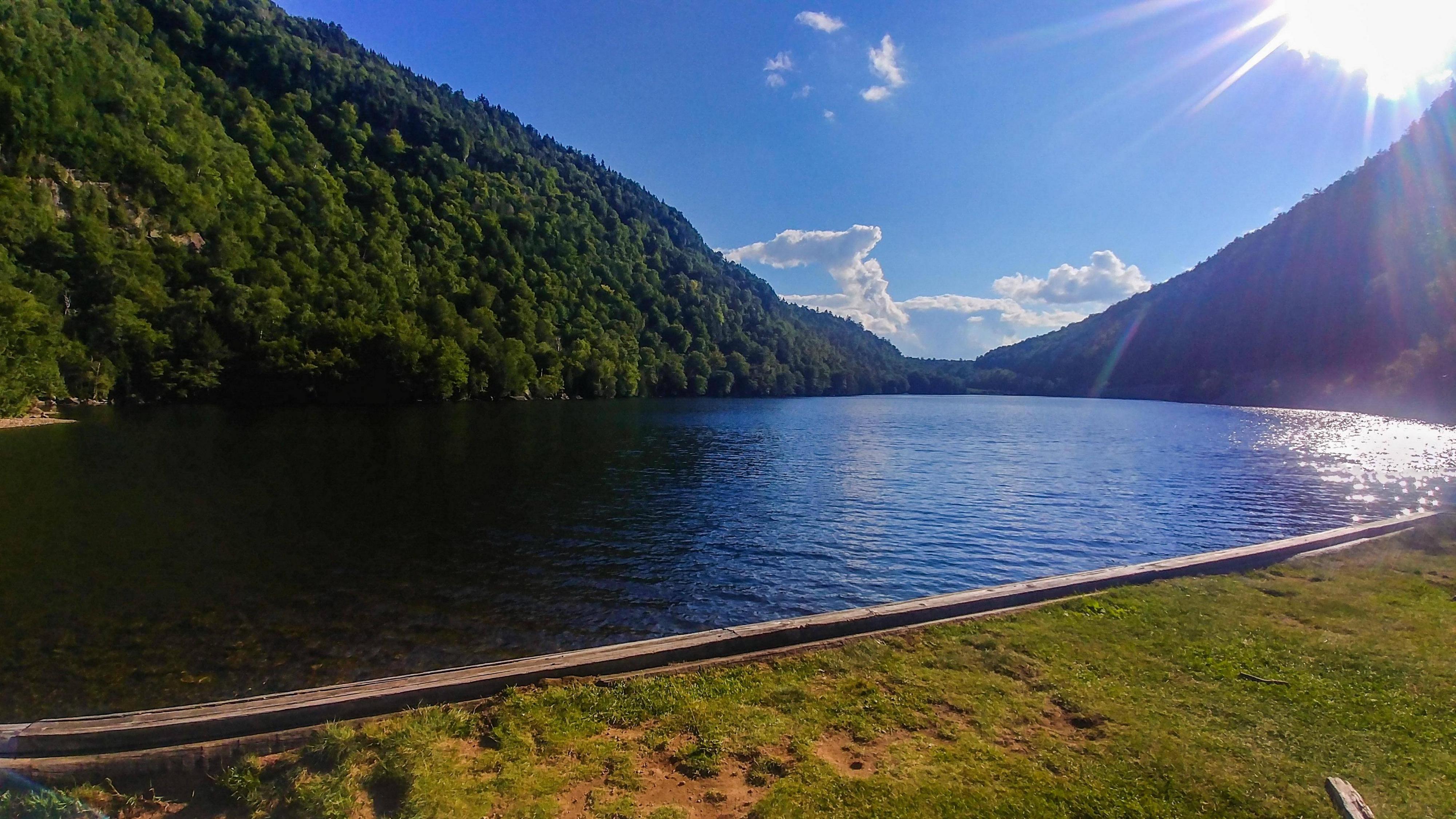 I can’t wait to go back and finish the rest of the 9ers! It feels good to be completing a challenge until my knee can handle the 46ers again.

Total Duration: ~4 hours, including who knows how long at the top.