My first REAL winter high peak! I’ve hiked plenty in the shoulder seasons, and as much as I enjoy it, I’ve always secretly thought the people who say “Winter hiking is the best hiking!” were a few peas short of a casserole….. So here I find myself up at 4:30am, driving 3 hours to the trailhead, and sitting in the car looking at the “4°F” on the dash, wondering whyyyyyy are we doing this??

After half an hour of donning all of my layers, knee braces, and snow shoes (LITERALLY. 30 minutes to do this.), we signed in at the very broken register at 8:30am, and started the 1.8 mile walk up the gravel road. 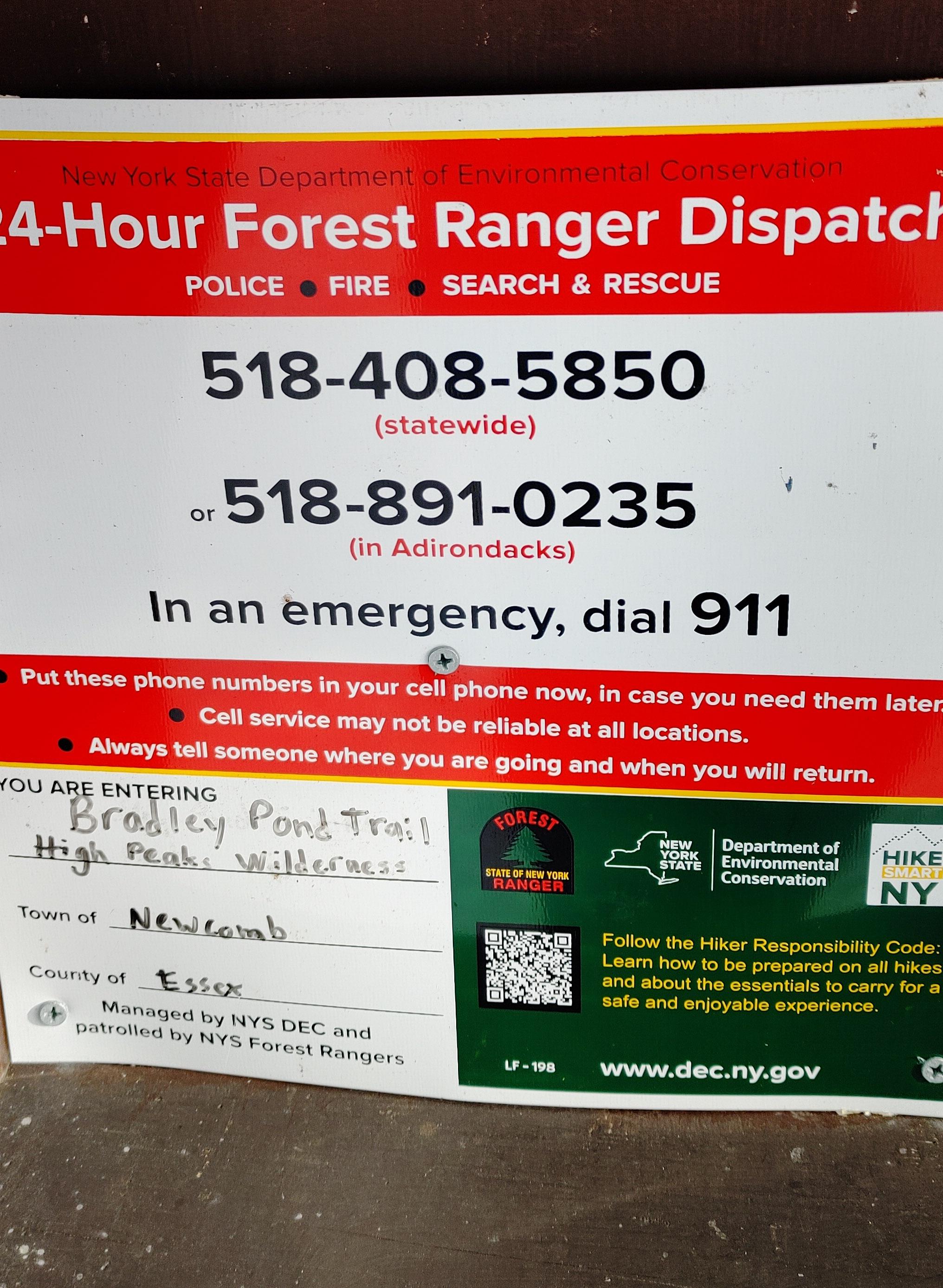 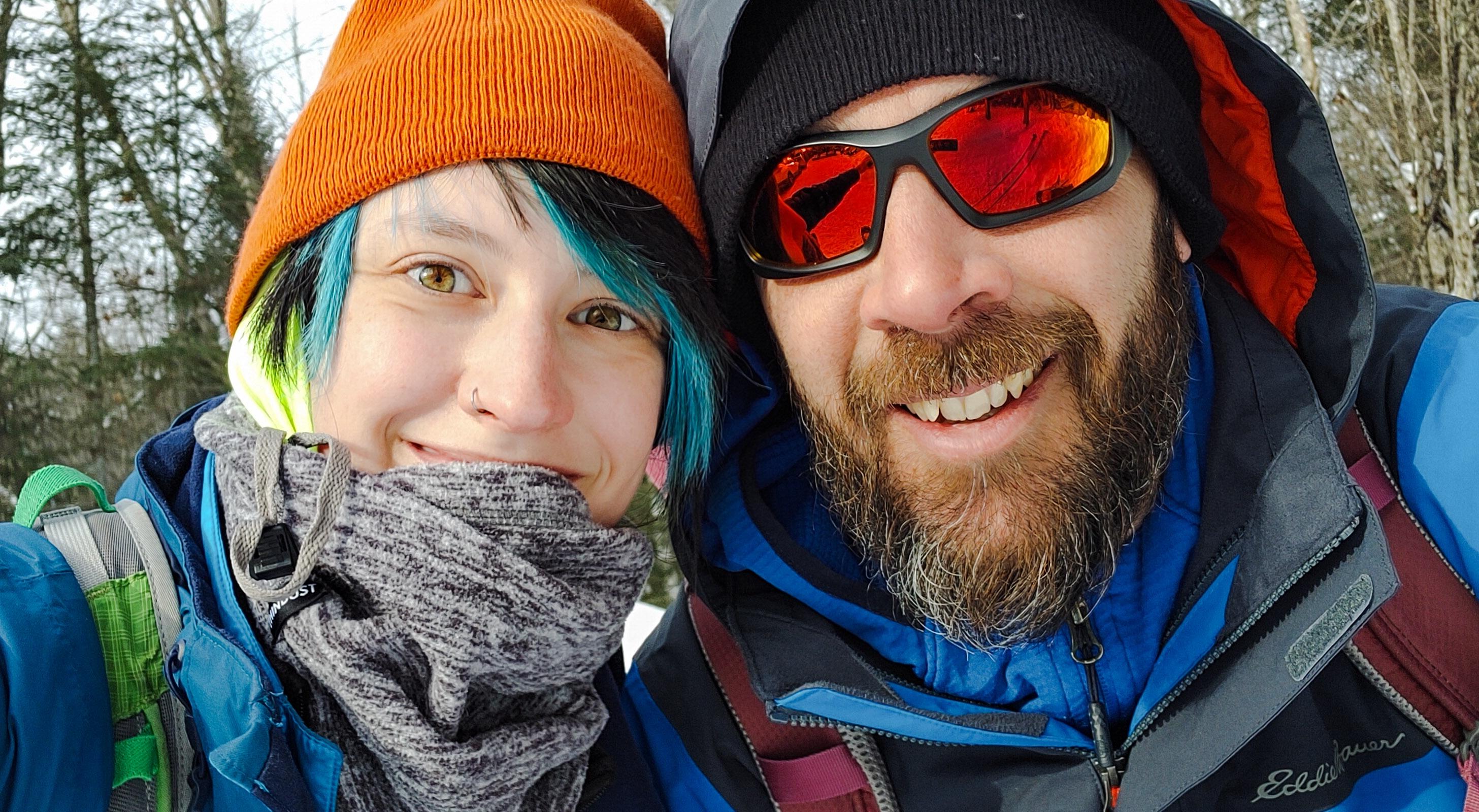 We’d been here back in November just when winter was first dusting the mountains – we started in the dark, and finished in the dark after only summiting Santanoni and Couchsachraga. So we’d never actually SEEN this road! And it was beautiful – a thick layer of snow covering the ground, with a perfectly packed path broken out ahead of us.

After a little under an hour of walking, we reached the junction with the trail at 9:20am. 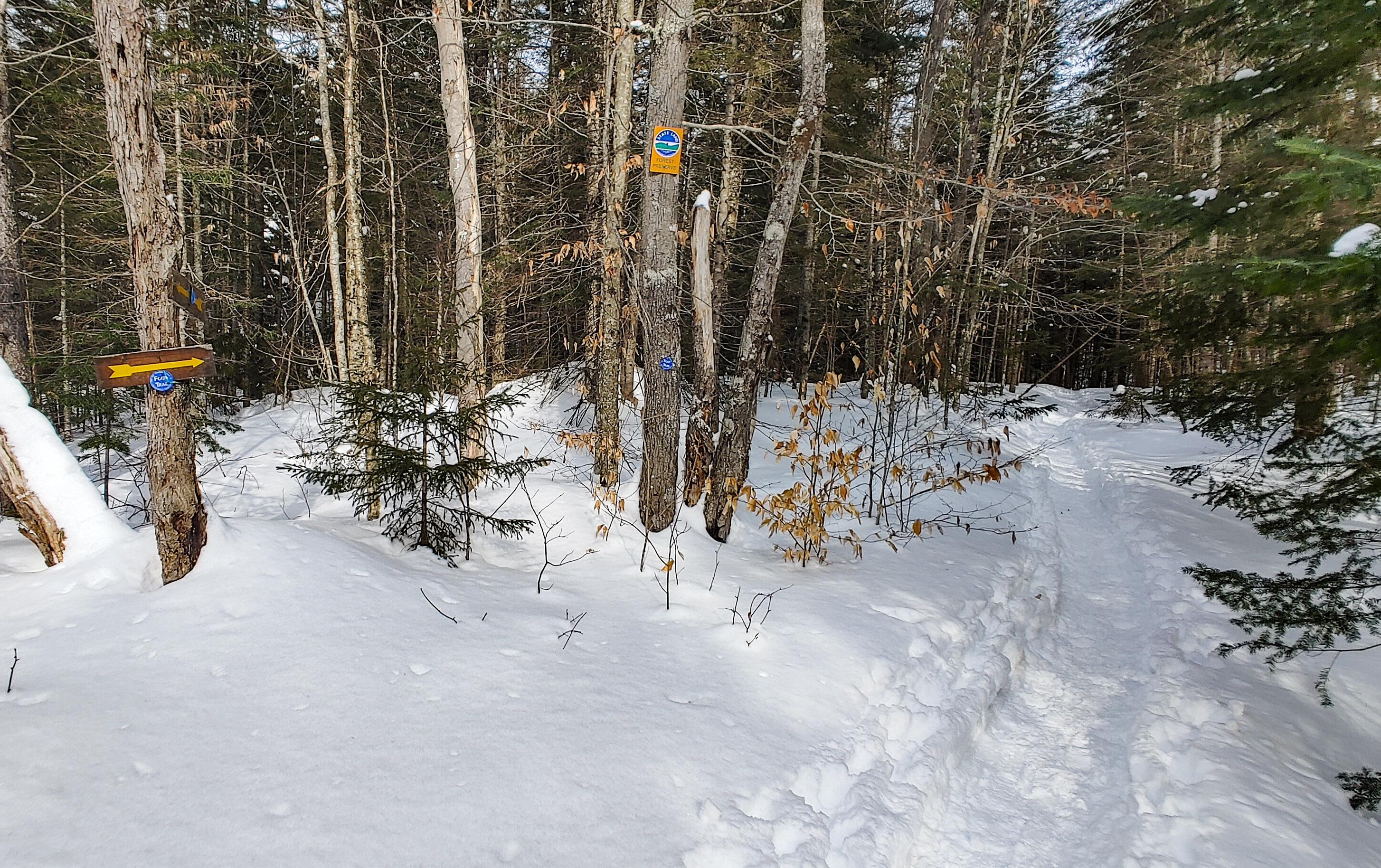 We trudged along in our snowshoes – they take me an hour or two to get used to – and when we looked to our left coming down a small hill, we saw written in the snow with a pole “MOOSE TRACKS”! And sure enough, we looked around and spotted them! No moose, but that’s the closest I’ve ever been to seeing a wild Adirondack moose! I didn’t stop to take any photos though, and 10 minutes after the junction we were at the bridge. 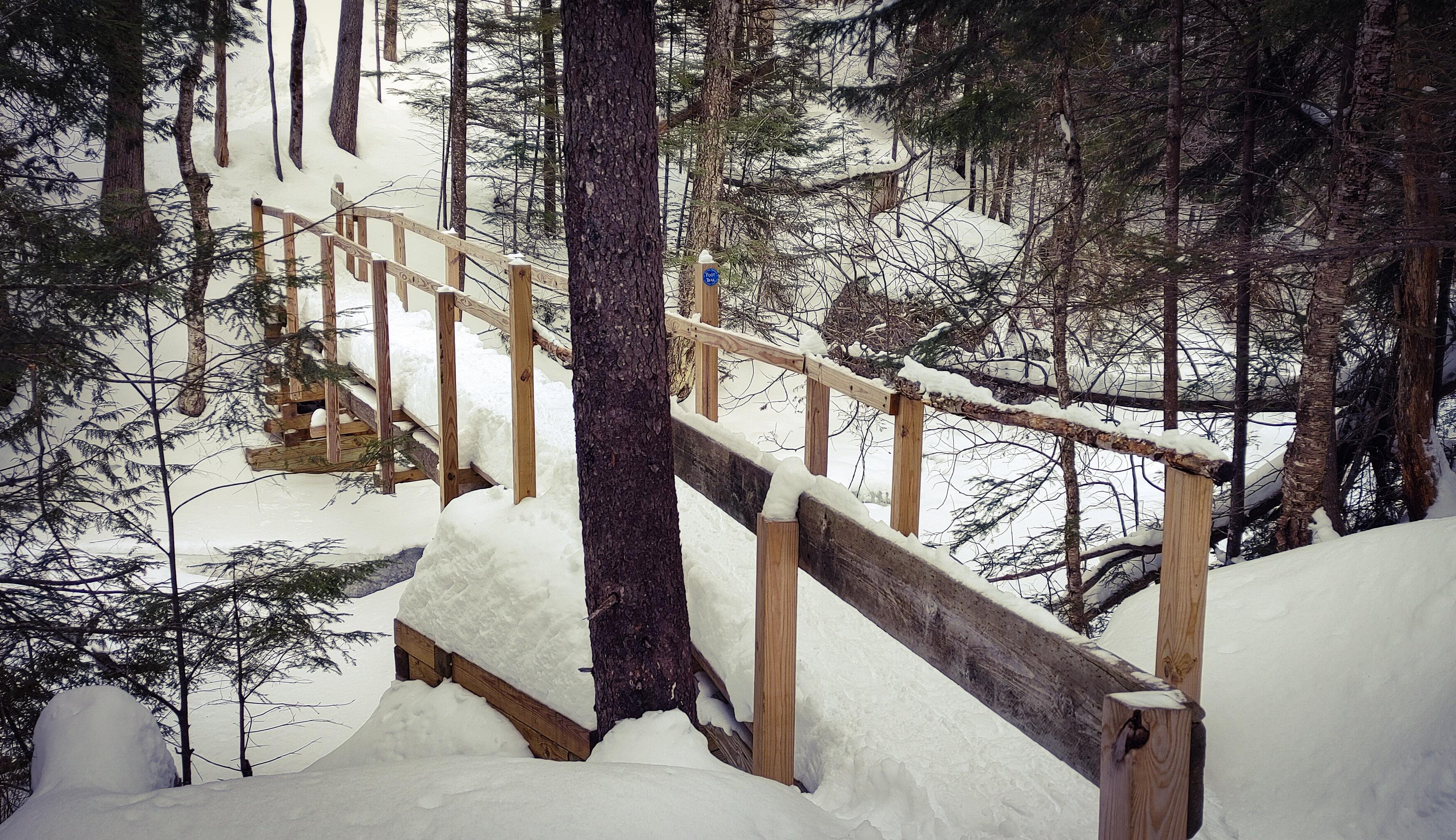 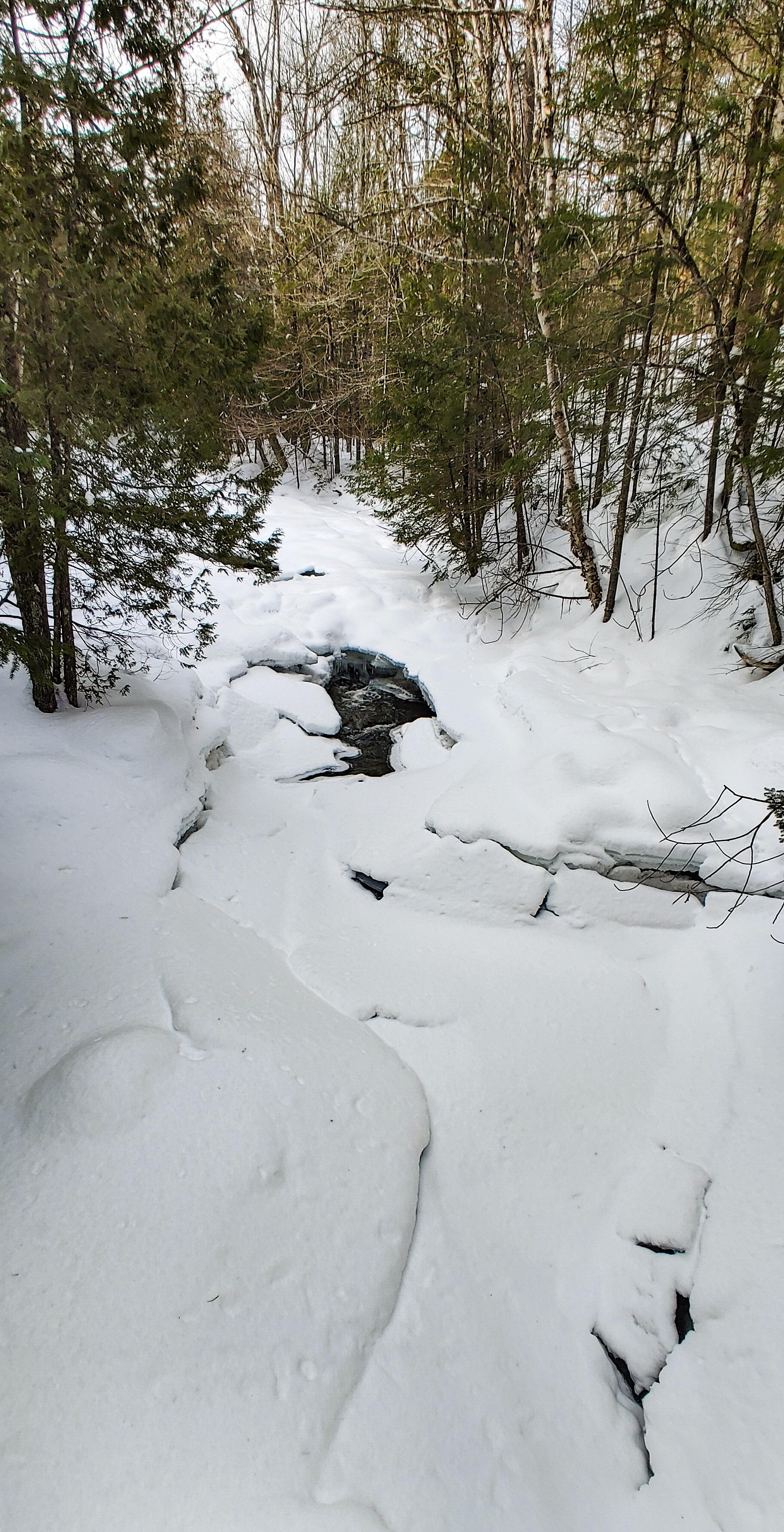 Shortly after the bridge, we began following a stream steadily uphill for the next ~1.3 miles. As we started to gain some elevation, we caught some glimpses of the massive Santanoni looming through the trees, covered in snow and almost blending into the sky. 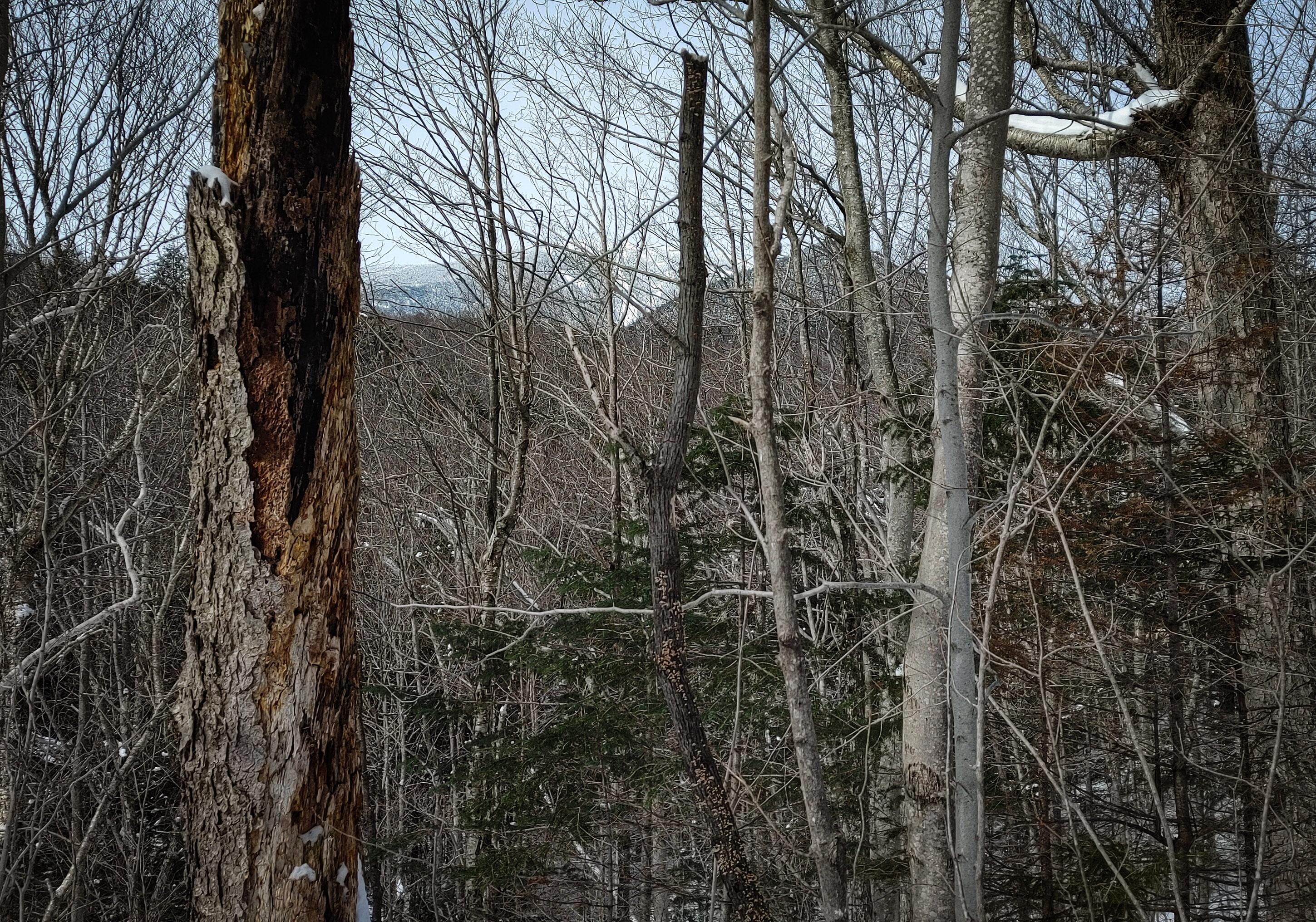 We only met a handful of people turning back towards the trailhead as we climbed. I was super envious when two guys on skis came smoothly gliding down the trail – it looked so fun and must be so fast to get back to the trailhead!

At some point we stopped a few minutes to have a snack and I spotted this cute little tree with a snow hat, and couldn’t resist giving him a face with my pole – now he’s just happy to see ya! 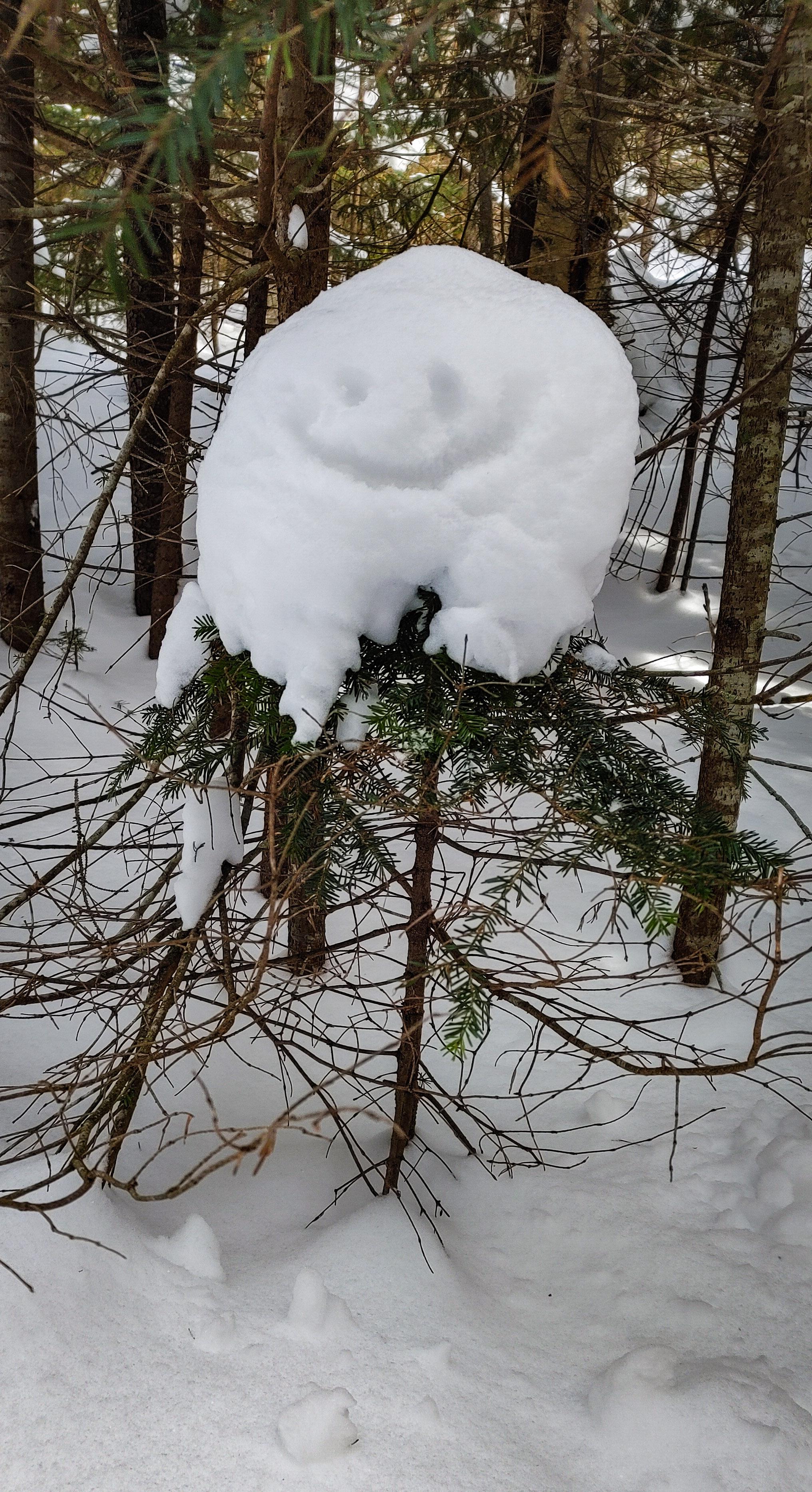 20 minutes later, we came to the viewpoint on the left on a rocky outcropping in the brook between a line of cascades.

200 yards later and we were at the junction with the express trail up Santanoni. The cairn marking the junction was completely buried in snow, which left me wondering – how did the people who broke the trail know to turn there?? It looked almost no different than any other patch of forest, so kudos to them! 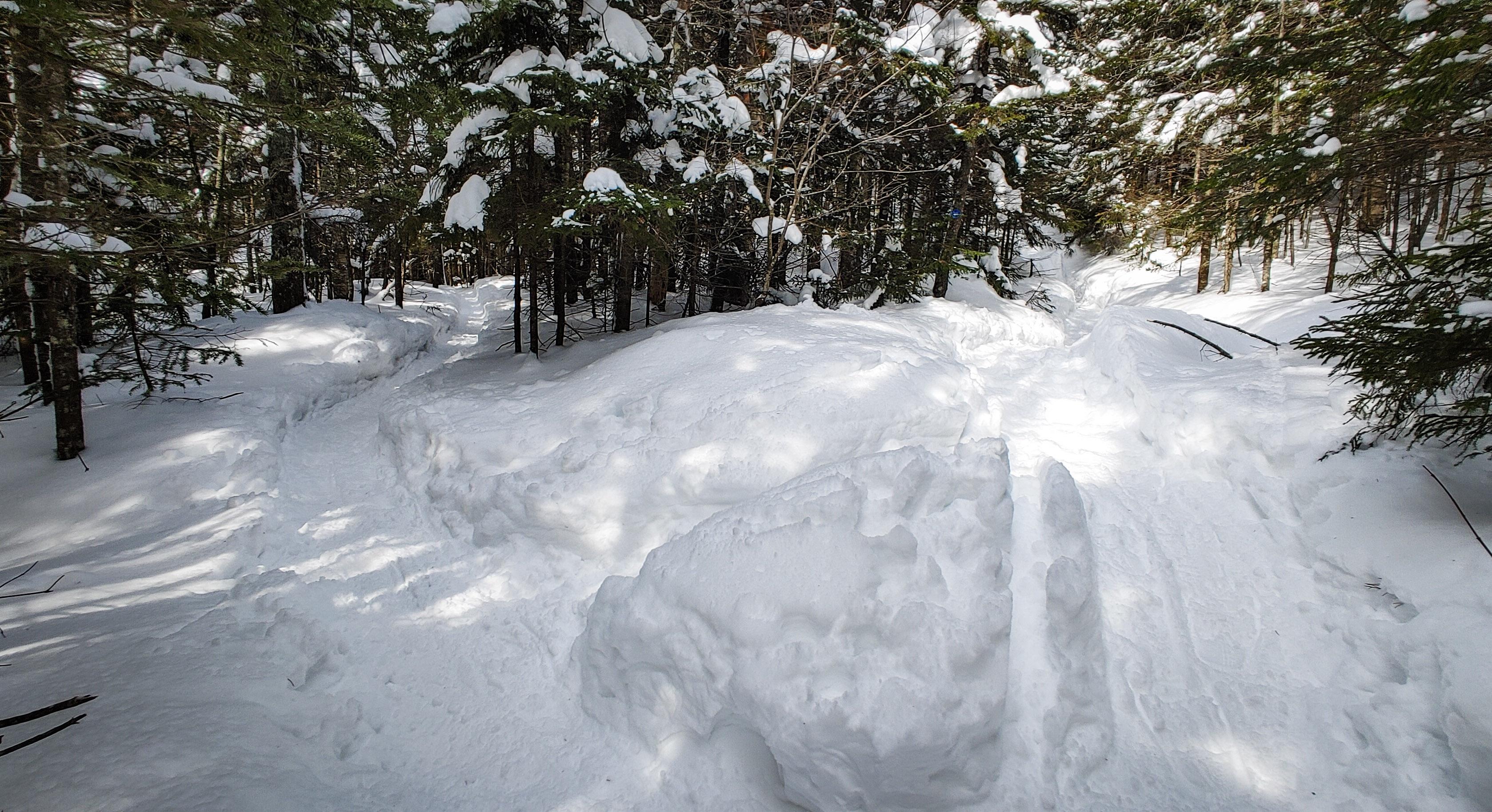 After the junction, the trail leveled out a bit for the next mile until we reached the trail up to Times Square 20 minutes later.

We were going to turn left to head up the ridge, buuuut of course I wanted to see the Duck Hole Lean-to and have lunch there, so we continued straight ahead. On the map it looks like the lean-to is right there. So first we climbed one hill. Then another one. Aaaand another one. Until I got pissed at adding unnecessary mileage to our trip and turned around 😆

So there we were back at the junction….again….We walked down a small hill and onto a clearing which is presumably a small pond when it’s not frozen, and had lunch in the sun. And I got to use my little inflatable cushion! One of the toughest things for me in the winter is staying warm when I stop to take a break, especially when I’m sitting directly on the snow and ice. 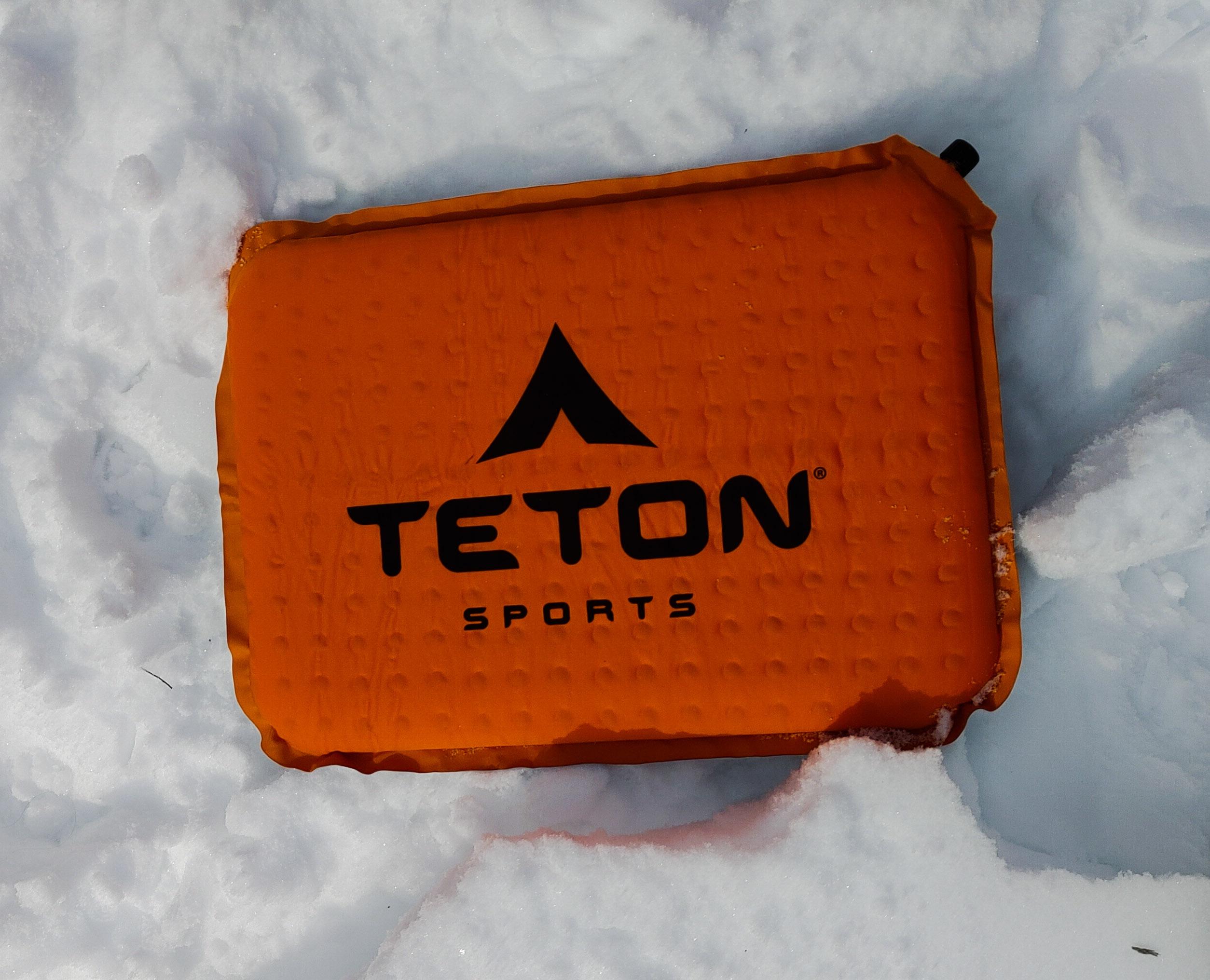 It worked so well! I sat all bundled up, enjoying my cream cheese and jam sandwich with a waaaaarm butt. Life is good.

After a nice break, we hit the trail again. For a while there was little elevation gain, but then it got very steep very fast as we passed Bradley Pond on the left. After a few minutes of steep climbing, we found ourselves perched on a boulder with a glimpse of the mountains.

It seems like every hike and every mountain we’d climbed since the beginning of winter had been during a blizzard and required not only that we break trail, but had us dealing with wind and snow buffeting our faces, and no views from the summits. I forgot what it was like to hike in such beautiful weather – and the sun?! And we passed these amazing rock cliffs to our right that were just dripping in huge icicles. 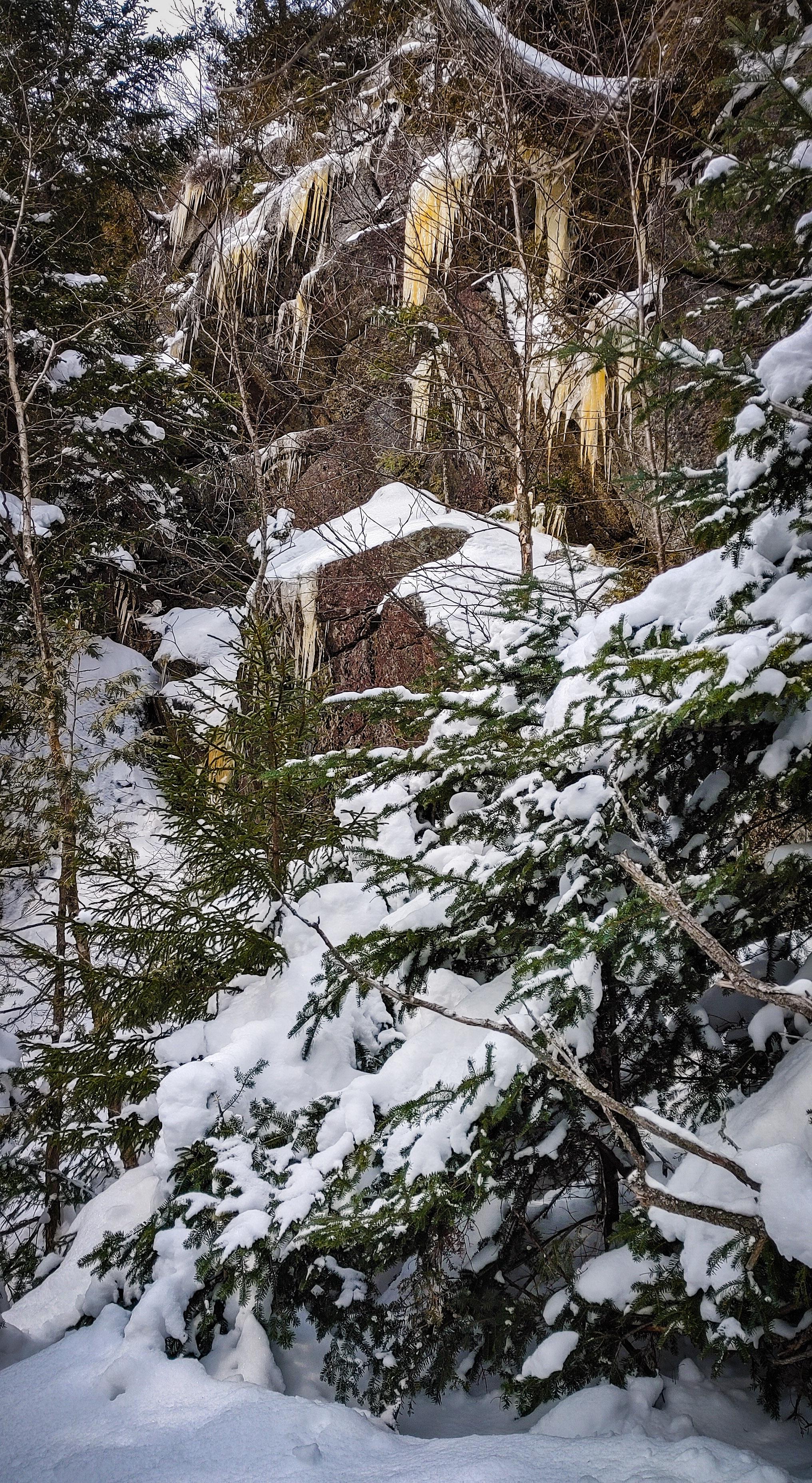 An hour after brunch the climbing briefly stopped and we slid on our butts under this tree until we reached Panther Brook shortly after.

I was actually pretty nervous about this section of trail based on what I remembered when we were here in November. We hiked down from Times Square in the dark, directly in Panther Brook, climbing over large icy boulders the whole way, and I even took a rough fall at some point. So here I was ready with my microspikes, my crampons, and revenge, but the trail was pristine so far – no rocks, no mud, no ice, not NOTHIN. Just snow.

From the bottom of the brook until the top of the ridge at times square, the trail climbs steadily and steeply. It seemed to go on and on and on, but we kept our spirits high by calling out “heeeeere kitty kitty kitty *smooch smooch smooch sounds*”….because we were climbing PANTHER…..We were sleep deprived and exhausted and this was hilarious to us. I do wonder what other hikers must have thought if they’d heard us! The nice thing though was the trail was so steep that every time we turned around, we had gorgeous views.

Peep how steep the trail was there….It was like that the WHOLE TIME. It was hard work – obviously – but all we could think about was how we were clearly going to be sliding down this entire mountain on our butts and it was going to be EPIC.

With the thoughts of butt sliding to energize us, the steepness got even steepier and I knew we were almost there – I even identified the spot I fell at last time. Then, 2 hours and 20 minutes after leaving the junction, we reached Times Square! 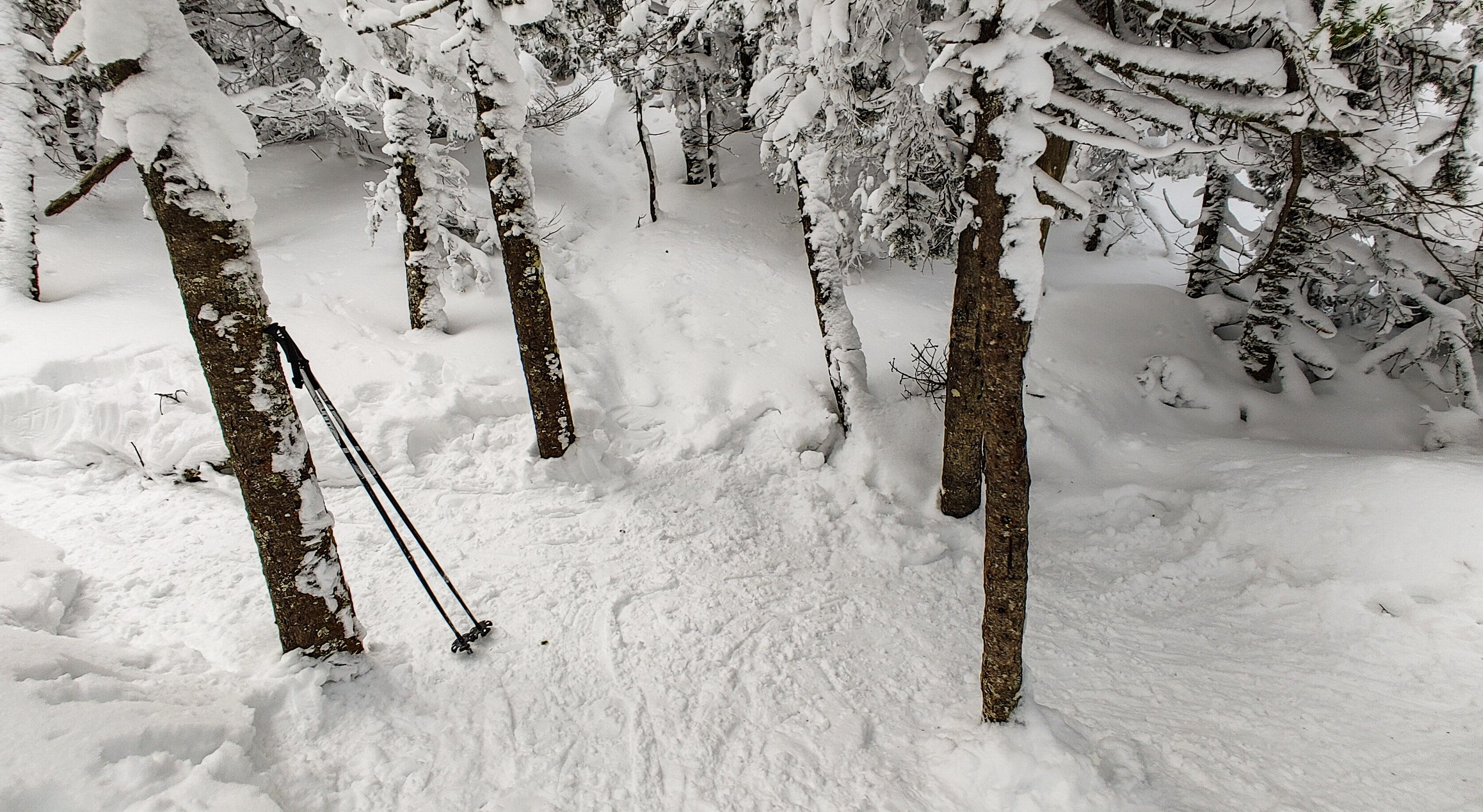 It shouldn’t even have to be said that the first thing I did was blow up my inflatable cushion, sit down, and scarf down some lunch and niiiiice salty chips. This was as close to Panther as we got the last time – it killed me at the time, but I was in so much pain that there was no way I could have made it up Panther and back. This time though, I was in great shape, feeling pain-free and energized as we trotted down the herd path towards Panther. After about 5 minutes, I caught a glimpse of the summit through the trees and my goodness it looked like it might as well be in Ohio. Nevertheless, 5 minutes of nearly-flat walking later and we reached a lookout just before the summit.

The only difficult section of trail lie directly ahead of us – a huge ice-coated boulder with just a very narrow ledge we could walk on.

Instead we took an alternate path someone before us had forged to the right, and we popped right out on the summit! 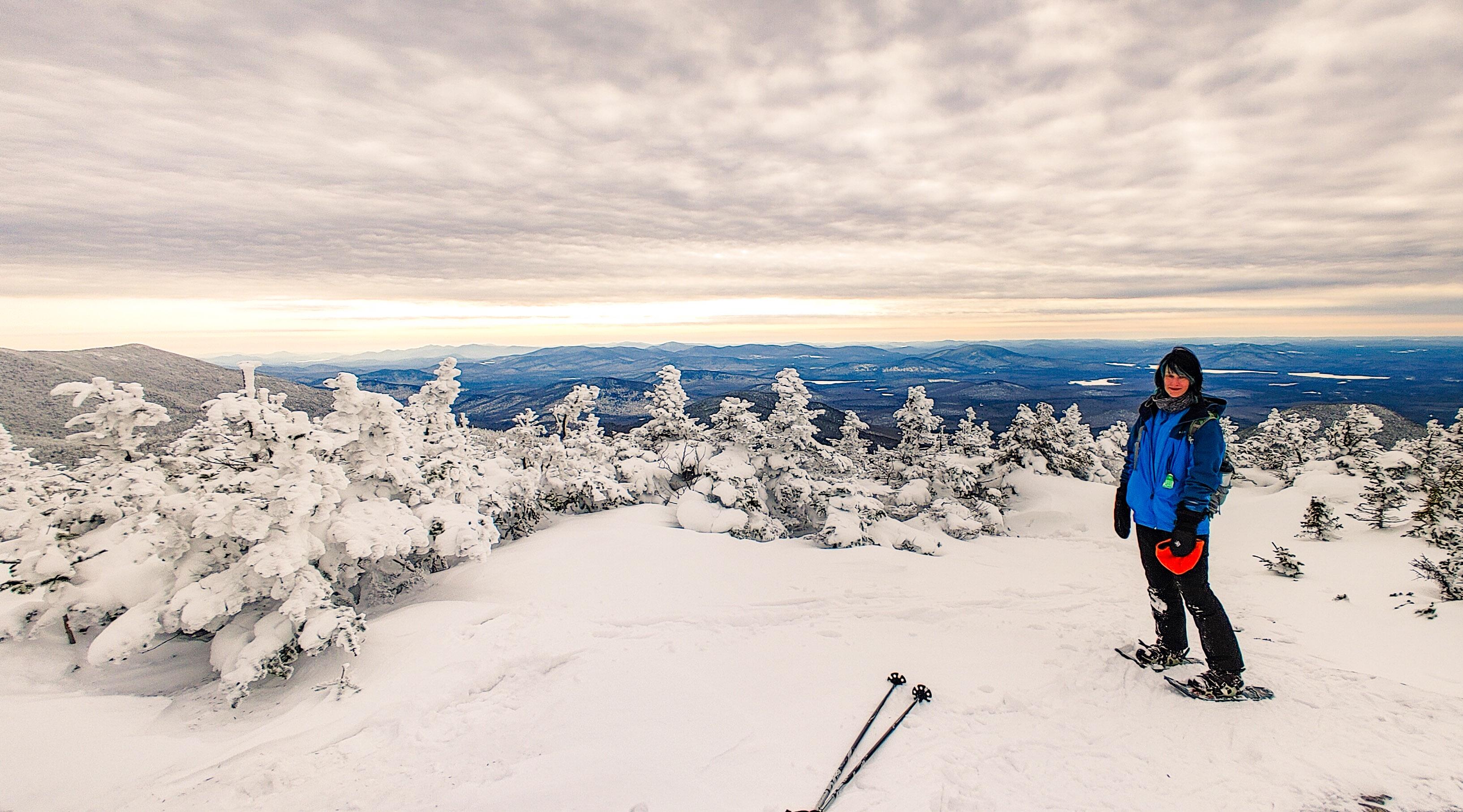 We explored the off-shooting trails to find some beautiful lookouts, and the summit sign. There was so much snow up here that we had to kneel to be at the same level as the sign!

And of course – victory chocolate! 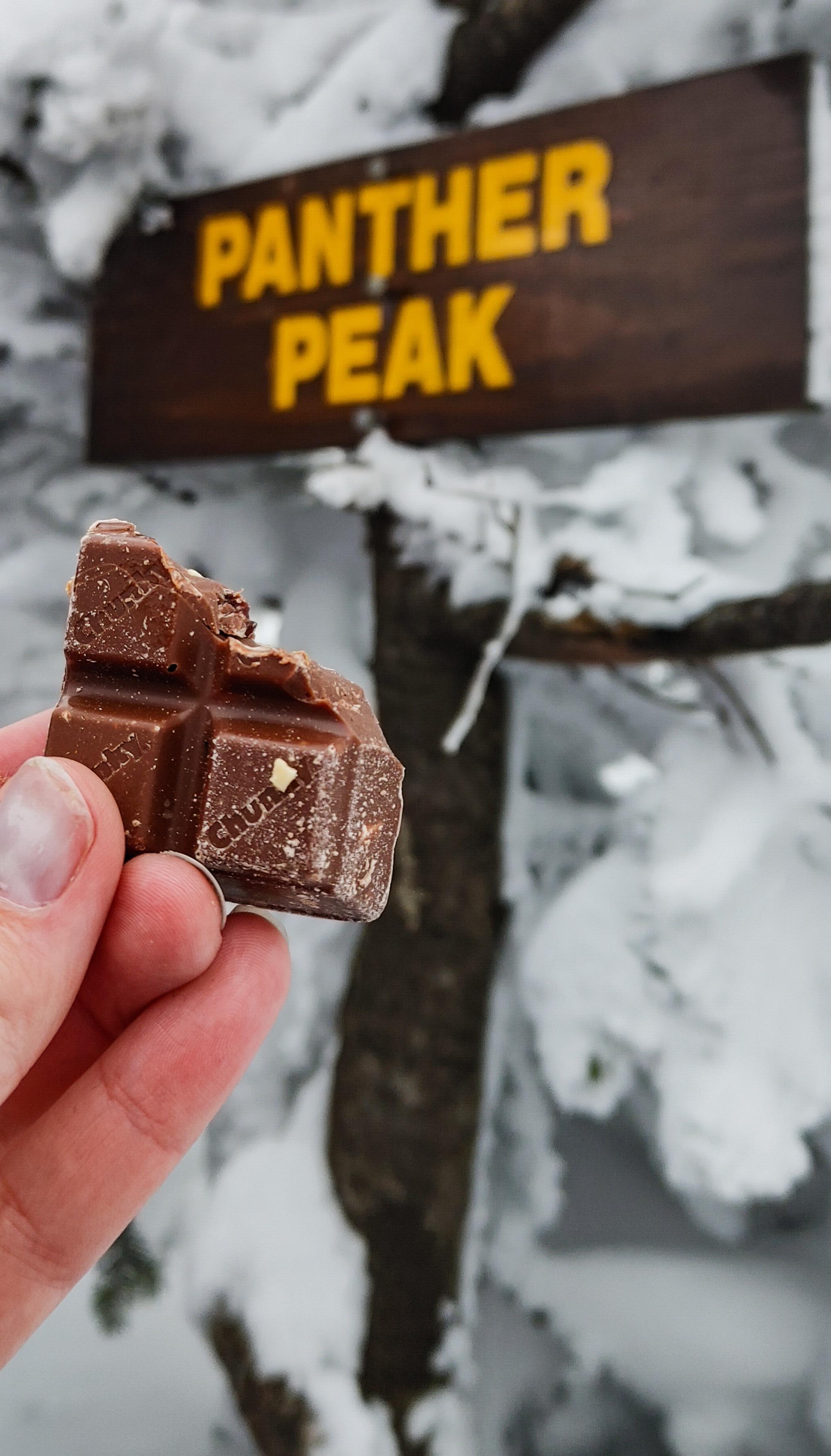 We wandered back to the larger open area to soak in the views. Weather couldn’t have been more perfect – temperature was hovering right around freezing, the sun had been out and now was unfortunately hiding behind some clouds, but there was NO WIND. None.

That littttttttle bump is Couchsachraga….Still don’t know how that one’s a high peak!

And played with my Peakfinder app! 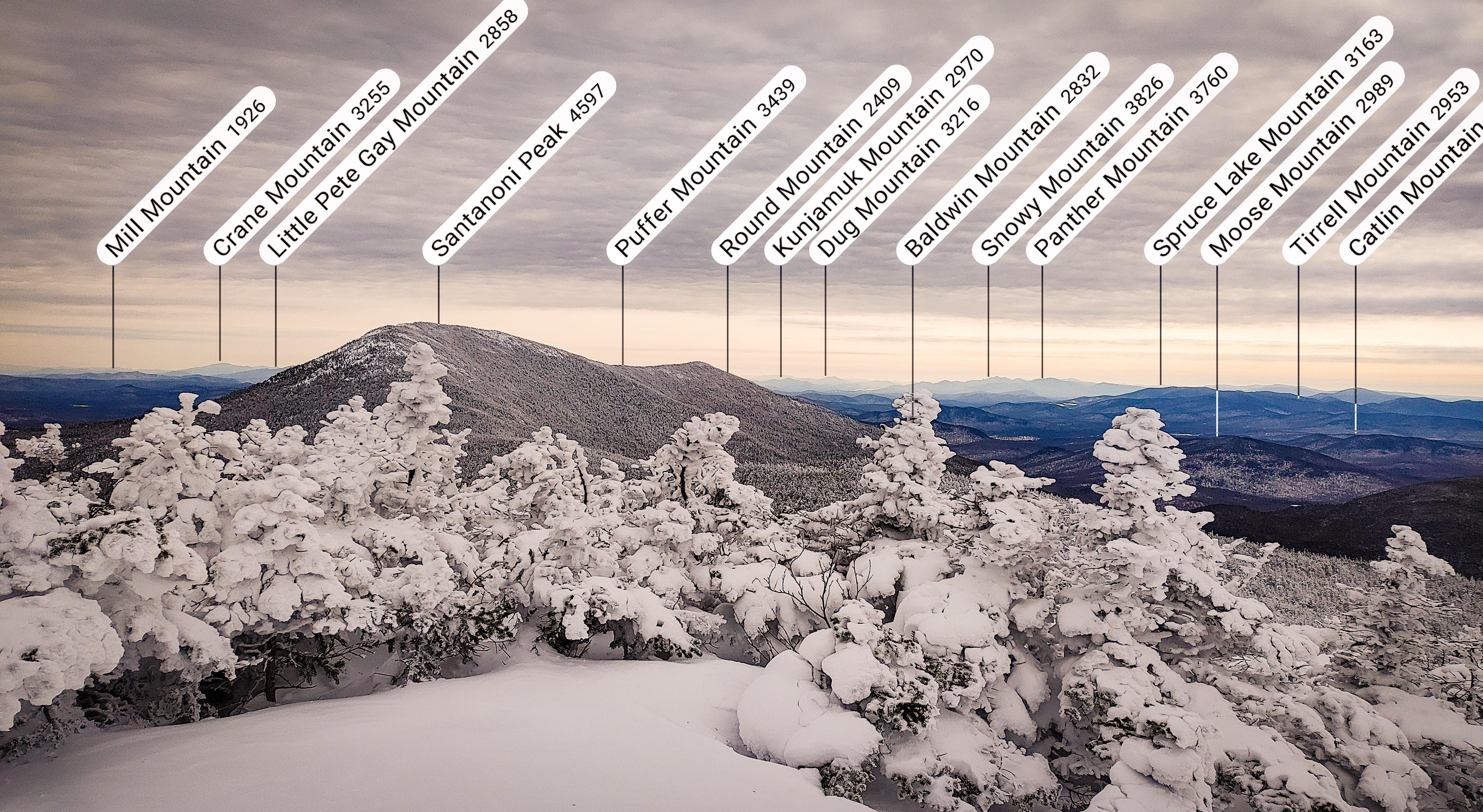 At 2:50pm, we made our move to head back to Times Square. 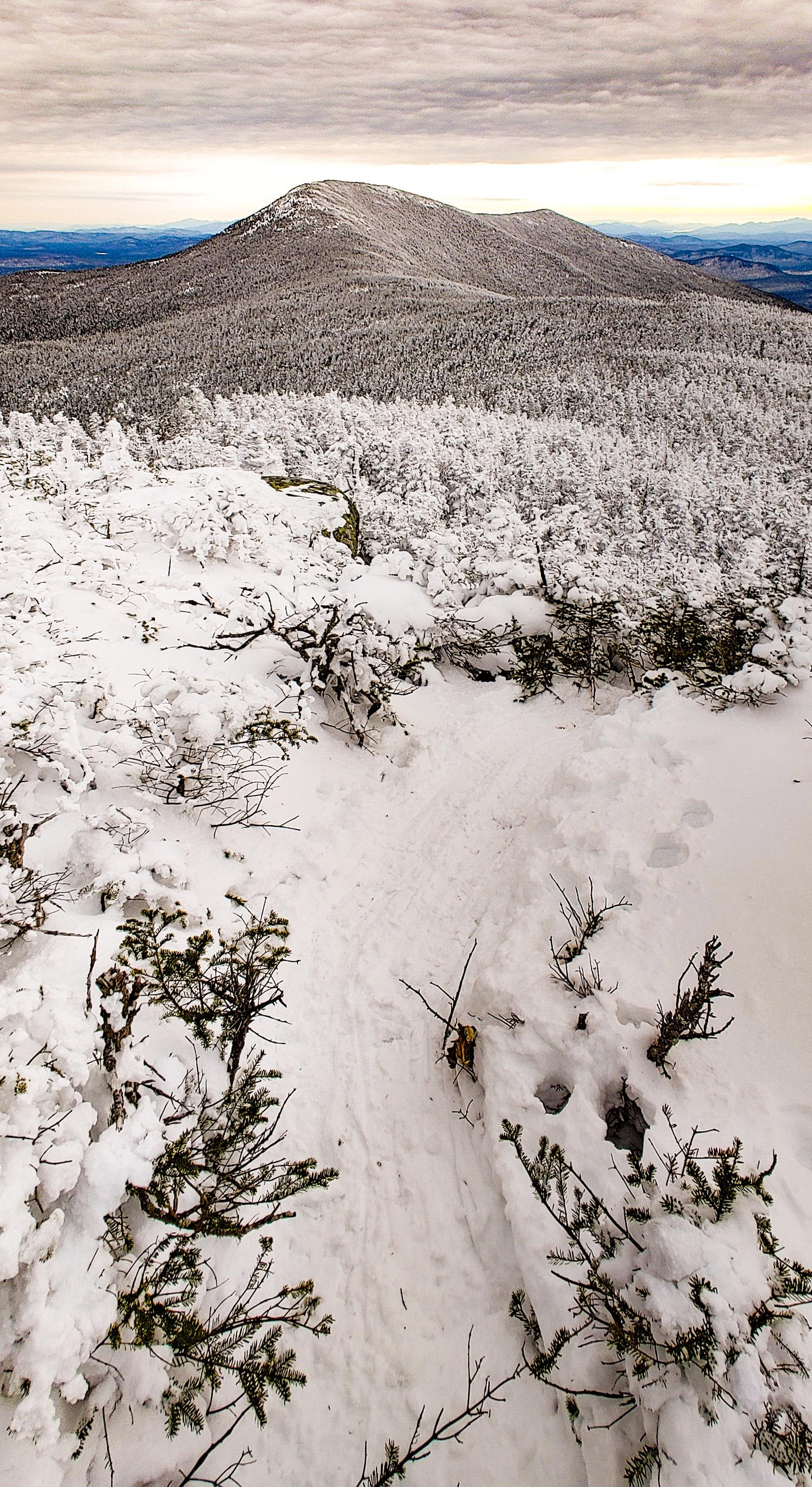 The trees up here were caked in crusted snow – it was a winter wonderland. And this time we were wearing the right clothes so we stayed completely dry! Yaaaaay dry feet! It’s the simple things. 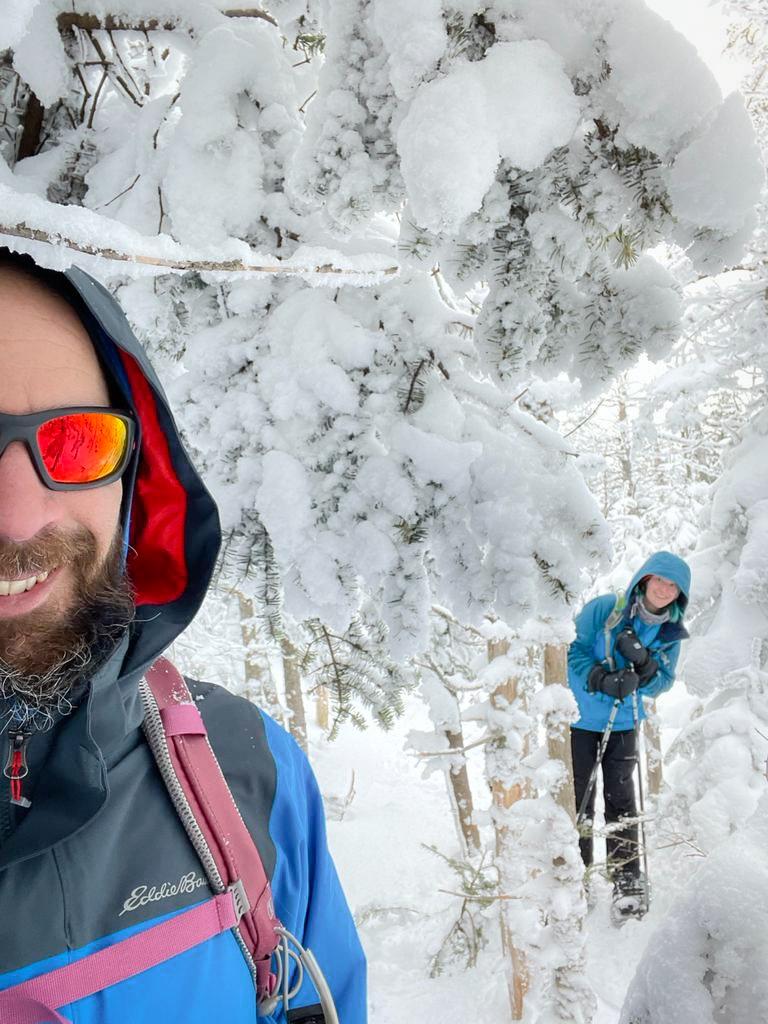 We made it back to Times Square in literally 15 minutes, met a few other groups of hikers finishing up from Santanoni and Couch, and headed back the way we came up with our sights set on BUTT SLIDING our way down the mountain. We’d apparently gone 18,000 steps by that point – I was so optimistic at our butt sliding prowess that I thought we wouldn’t get any more steps in until we were at the bottom. You can probably sense where this is going….And you know, we tried. We really really reallllly tried. But when butt sliding somehow becomes more exhausting that just walking – using arms and legs and core to drag yourself through the snow – what even is the point?

My friends, it DID NOT GO WELL. After a while we pretty much gave up and just walked down the mountain – until we got to the steep section near Bradley Pond and I just couldn’t resist. Naturally Gildo followed after me with….less success….. 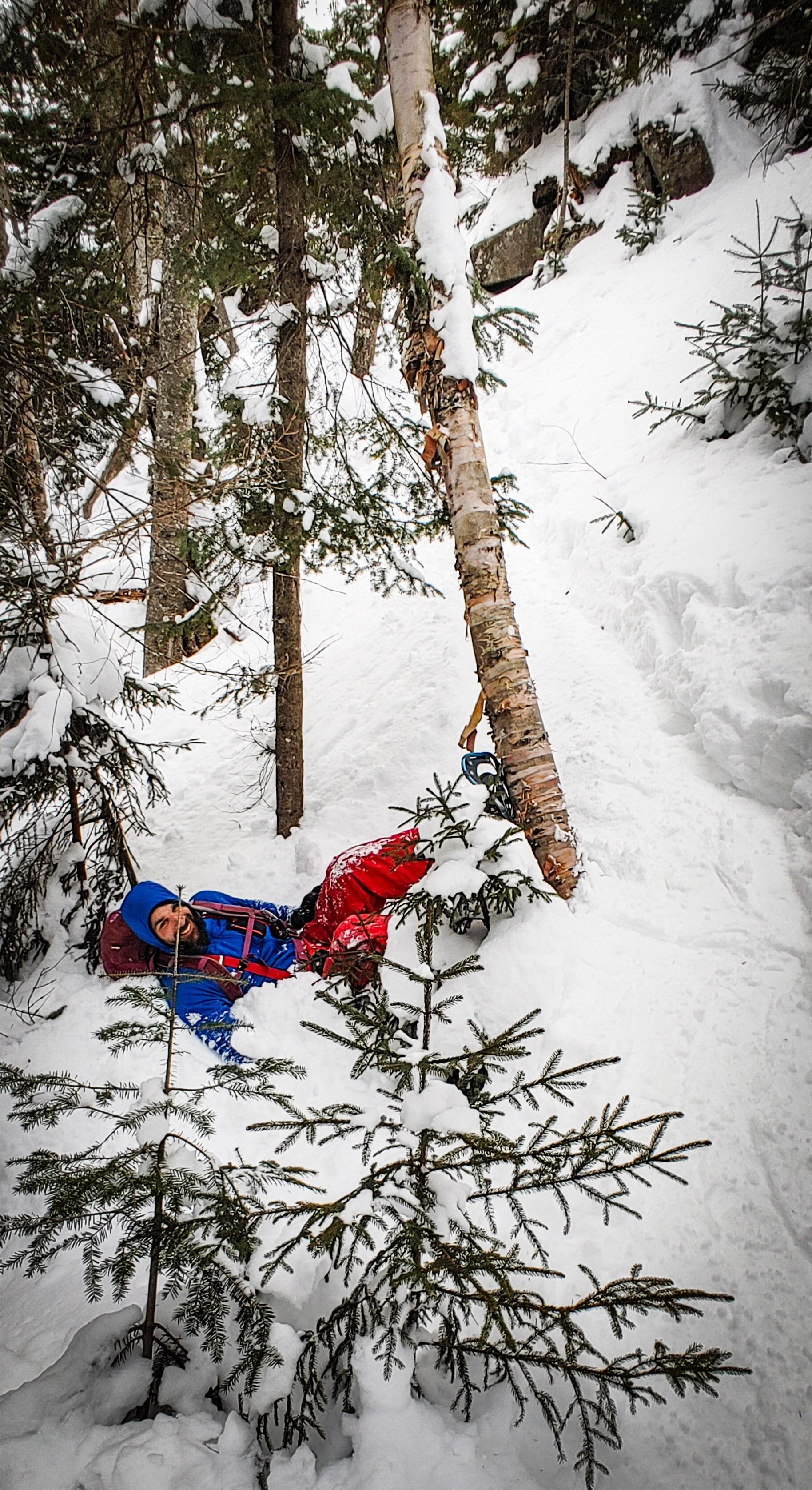 For reference, that’s the trail on his right. He is not in any way on the trail. At this point, the trail was more on him. We got ourselves back on our feet and reached the junction just before 5pm – 2 hours after leaving the summit of Panther. 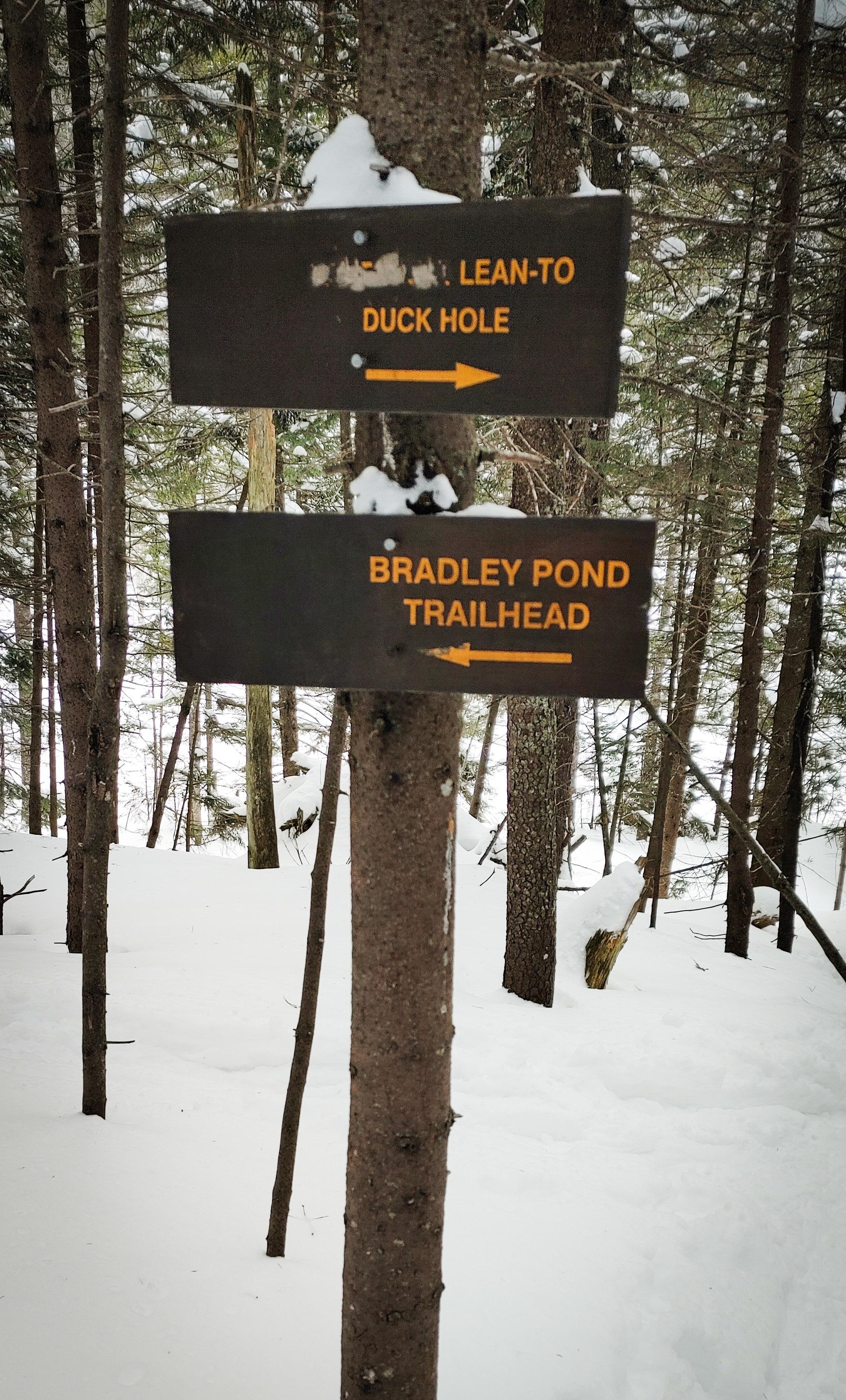 I was determined at this point to make it the ~4.5 miles back to the trailhead before 7pm, so we pretty much booked it. Unfortunately, I’d forgotten to bring my own trekking poles with me on this trip, so I’d been using a pair of Gildo’s ski poles that were in the back of the car, but they were about 8 inches too tall for me, and the trail was narrow enough that they really got in the way more than anything. So on the walk back, rather than bothering to carry them or use them, I started just dragging them behind me. I even gave them names, as if I was walking my two long skinny dogs – Rover and Grover, of course. 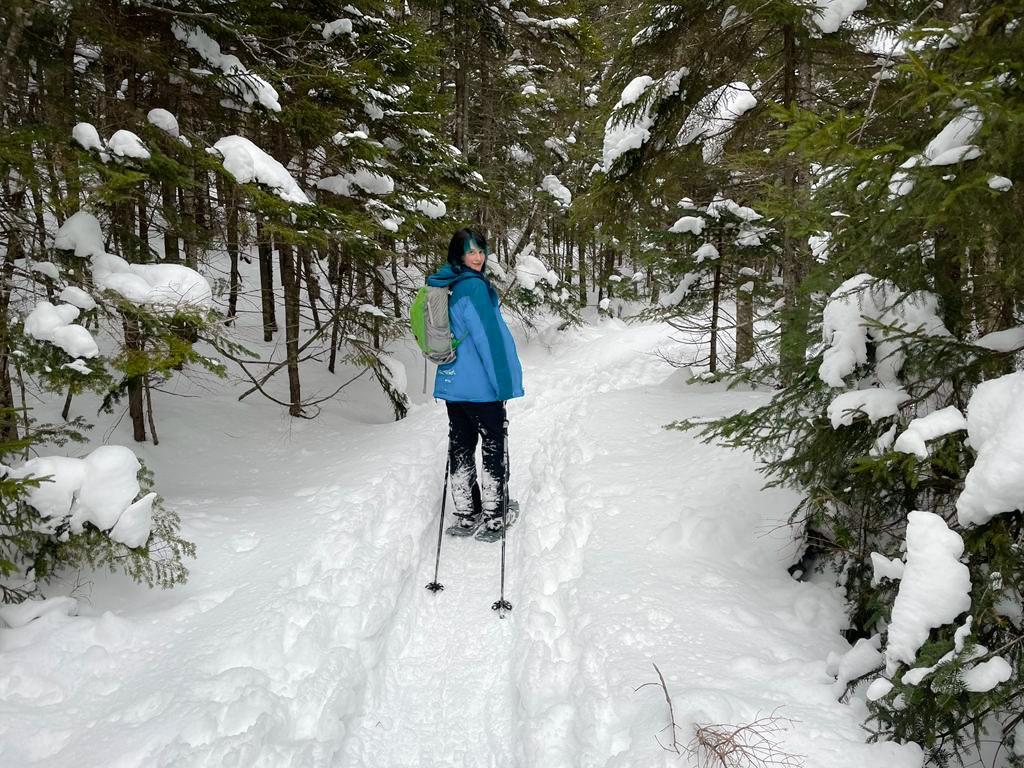 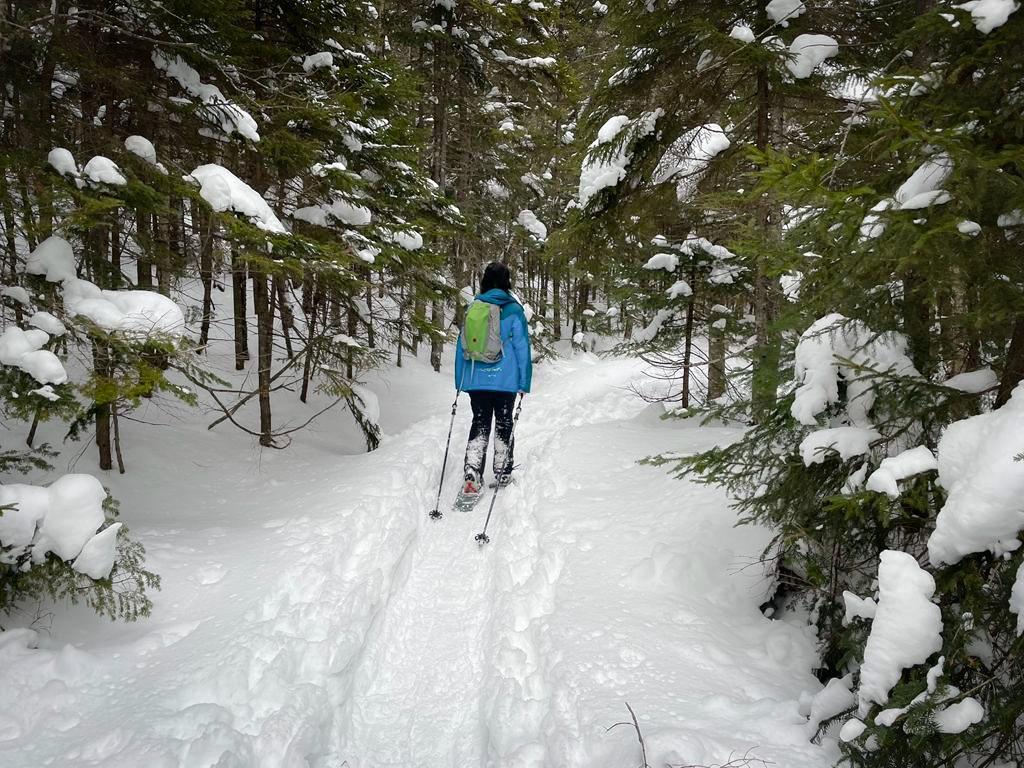 At 6pm we were crossing the bridge again and looking for moose tracks shortly after, and by 6:10pm we were back on the ‘gravel’ road. 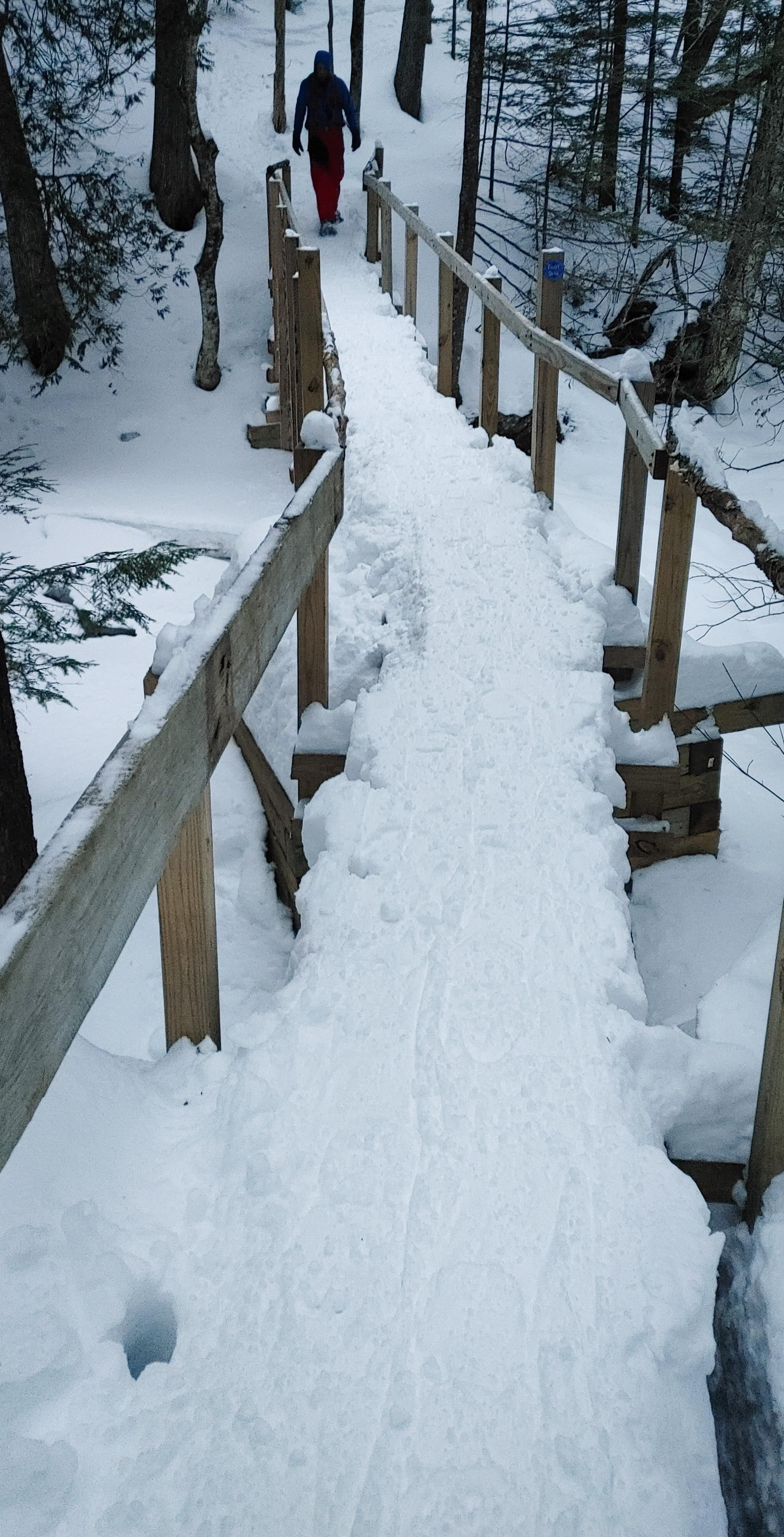 We put our headlamps on with 3/4 of a mile to go, and by 6:50pm we had reached the trailhead and signed out at the register.

This was hands down the best hiking day I’ve had in ages. Nothing hurt! My knee braces did the trick, and kept my body from having a flare all day. Plus the weather and trail conditions were just perfect. That said, it still felt amazing to get into the car and peel off so many layers of clothing that I’d been wearing all day. 25 down! Marshall, I’m coming for you next 🤩 Happy Hiking!