Weather was not looking promising on this Thursday morning, but I didn’t care. I was determined to finish my Lake Placid 9er with Cobble Hill and Baxter back to back, so that was my plan, rain or snow be damned. I arrived at Lake Placid at about 10am and found the trailhead, however because it was located on the private property of the Northwoods School, which had closed it’s gates to the public due to Covid, I chose to park next to the Lake Placid beach and walk around Mirror Lake to the trailhead. 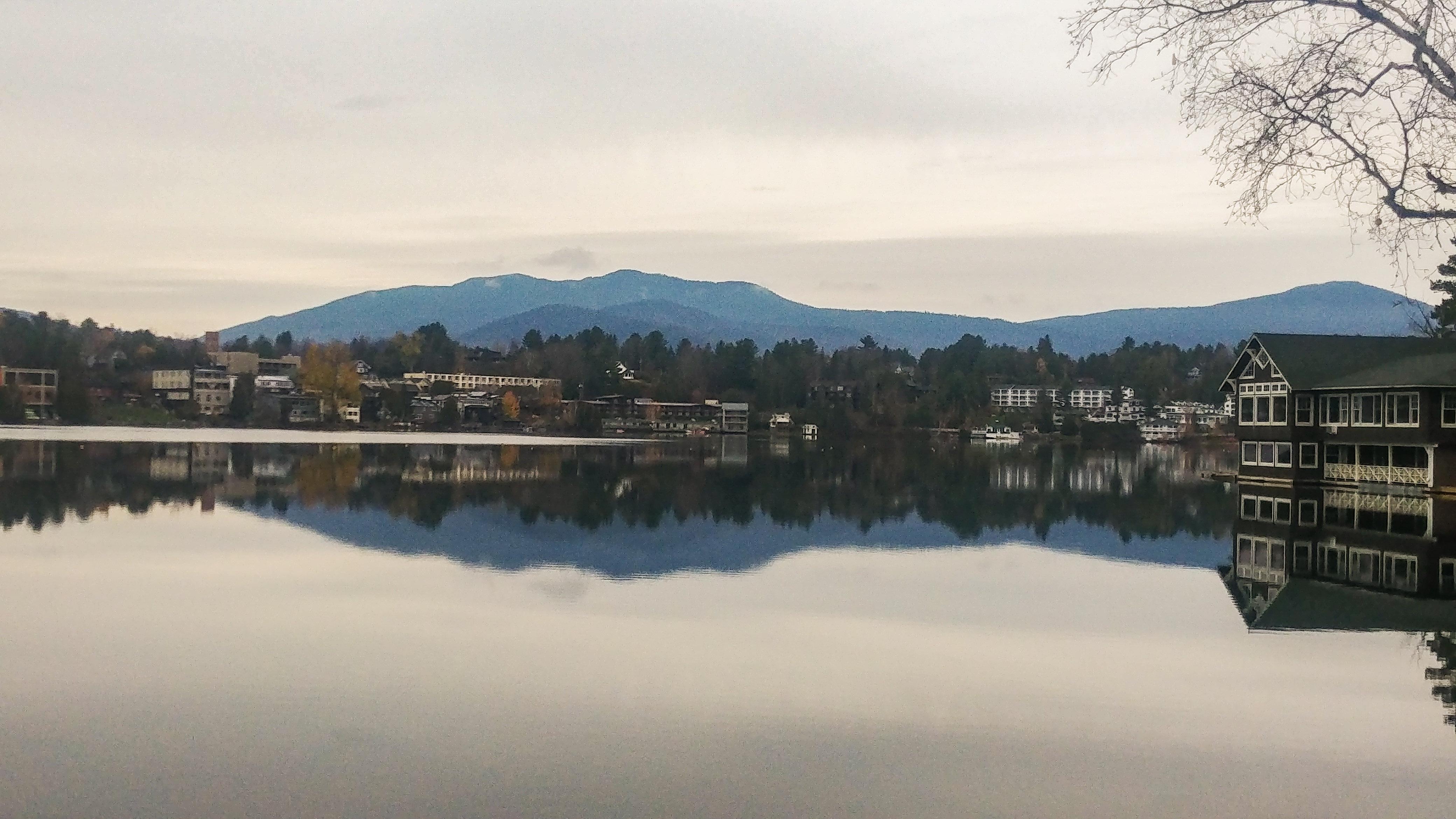 We warmed up with the mile walk to the trailhead, passing by many people on their morning walk. We reached the trailhead right at 11am and set off through a muddy, boggy wooded trail. 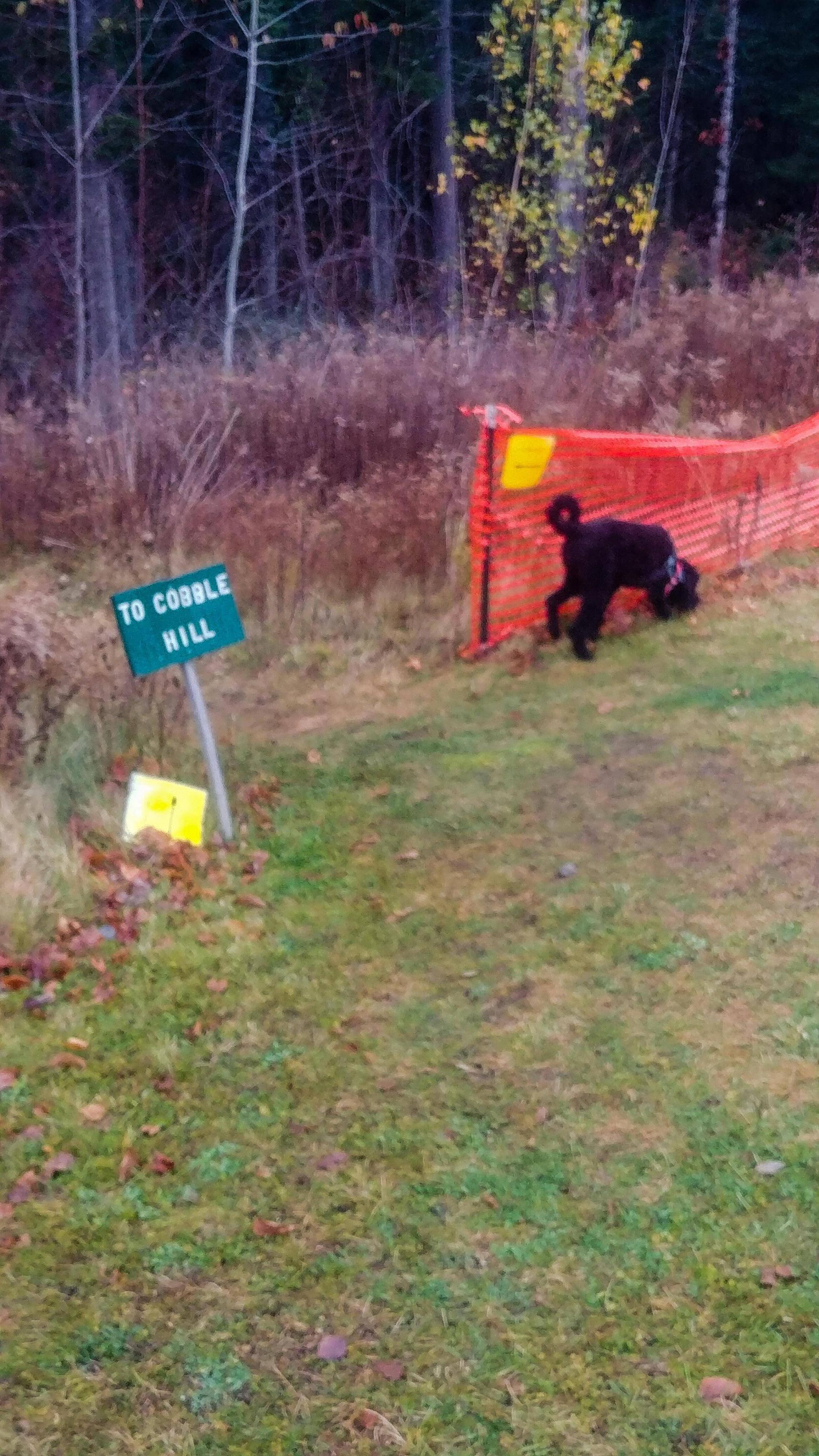 This trail was almost comically over-marked. Every few minutes we reached another obvious junction with laminated markers with arrows. It seemed that we were walking through a narrow strip of woods between private land, passing right behind houses, with many side trails marked off by bright orange plastic fencing. 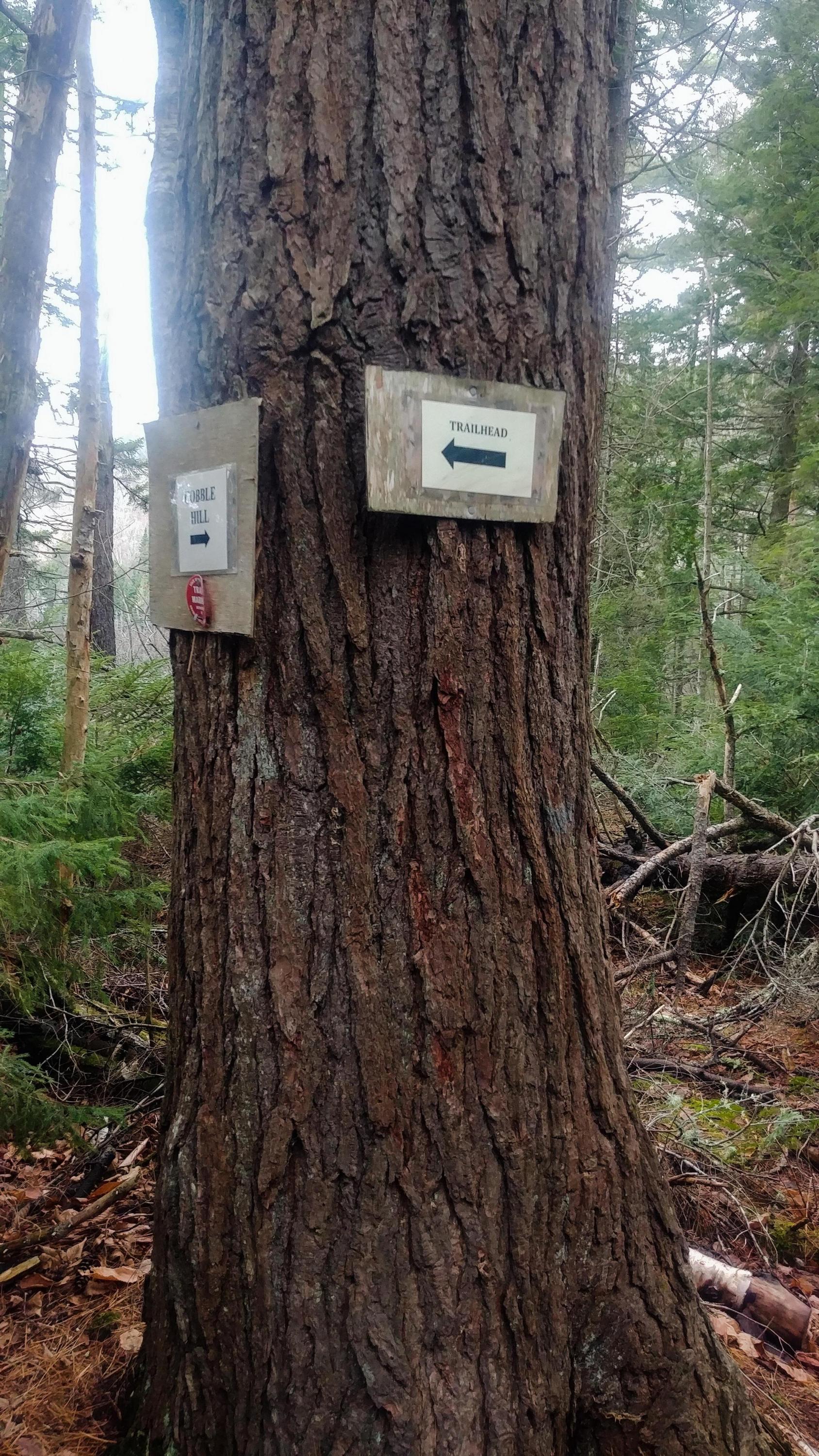 After 10 minutes of traipsing through the woods, we reached a junction with a very straight path going upwards from left to right, across which a sign leaning against a tree pointed to the left indicating the “easier” ascent up Cobble Hill. I chose to continue straight to go up the steep part and down the gentler grade to complete the loop. 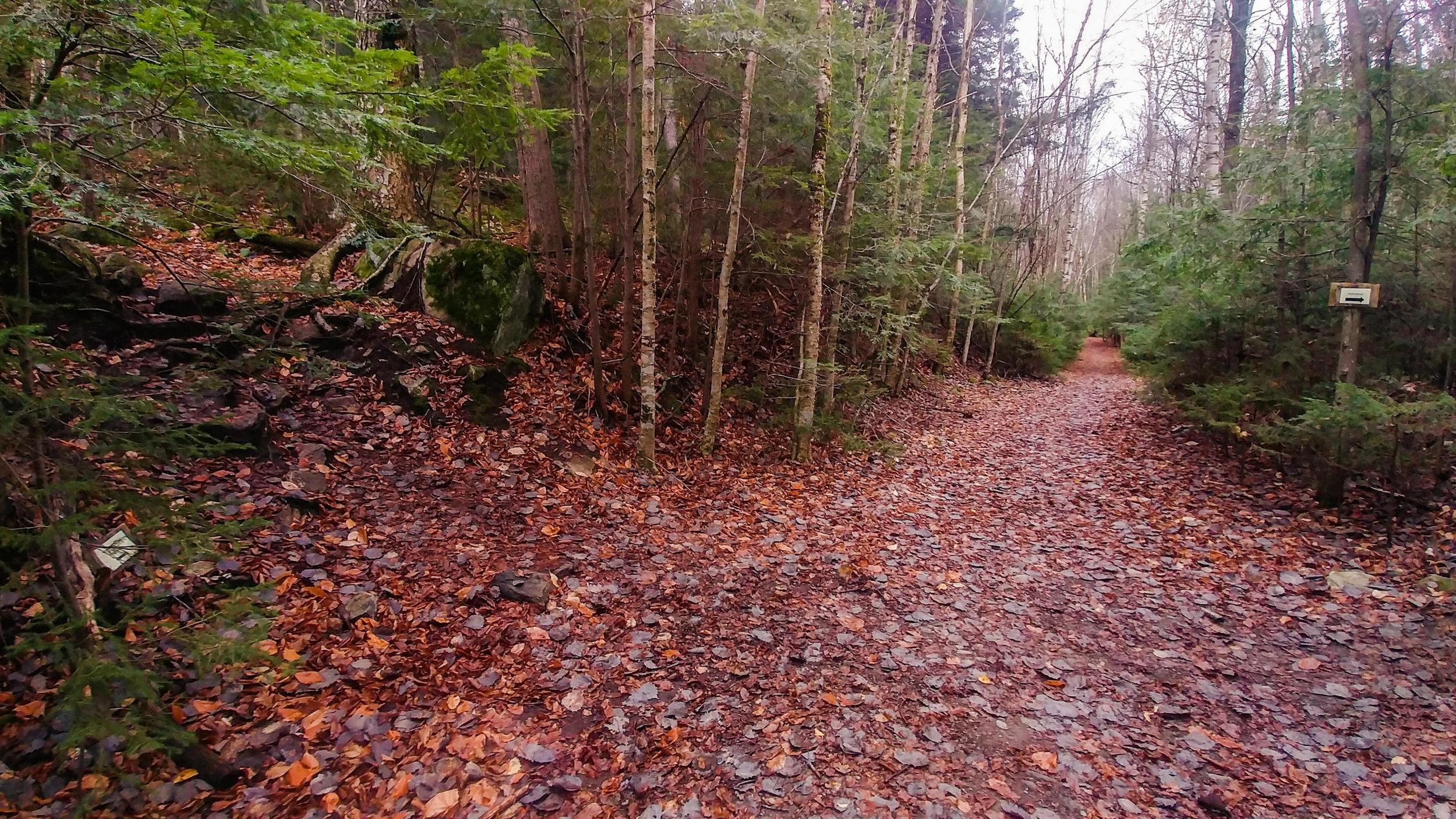 The going was pretty easy for being the “steep” side, as the path continued gently uphill for the next 10 minutes or so. So far I’d had the trail entirely to myself, and the weather was holding, so I was optimistic for some views at the summit! 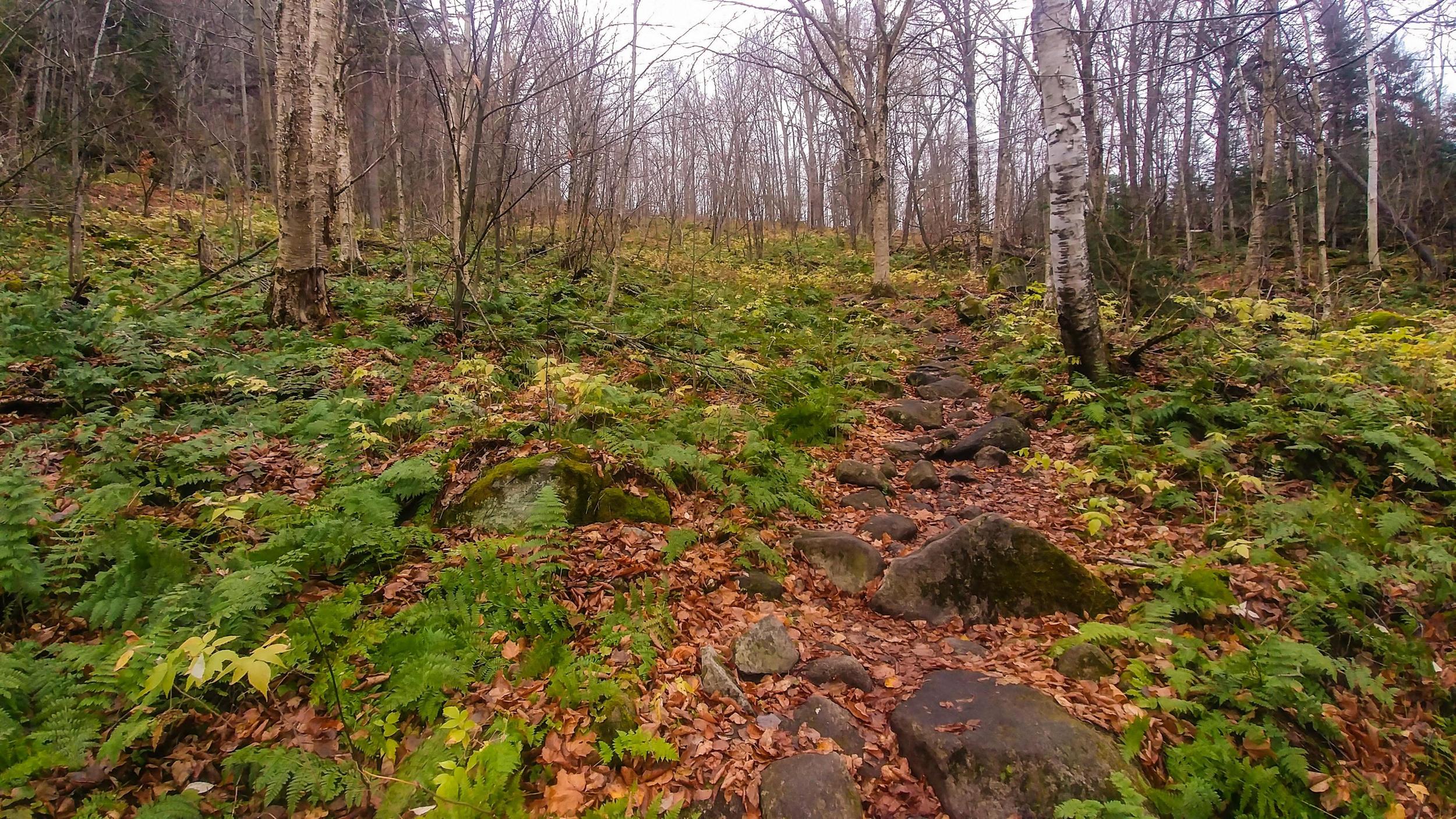 At about 11:30am I finally reached the “steep” section that I was anticipating. I had to laugh because there were so many trail markers along the way in places where the correct path seemed so obvious, however here, where it would have been very helpful to have a sign or two, there were none. Without knowing any better, I chose to stick to the left side on this steep, slick, flat rock face and scamper my way up. Obviously that was the wrong choice, as I found out when I got a bit stuck and had to crab-walk my way across to the right side, where I could now see some clear treadmarks from hikers before me. So learn from my mistake – when you see the steep part, stay to the right! There’s even a rope to help you up a section that isn’t particularly difficult, and leaves you on your own after that, HA! 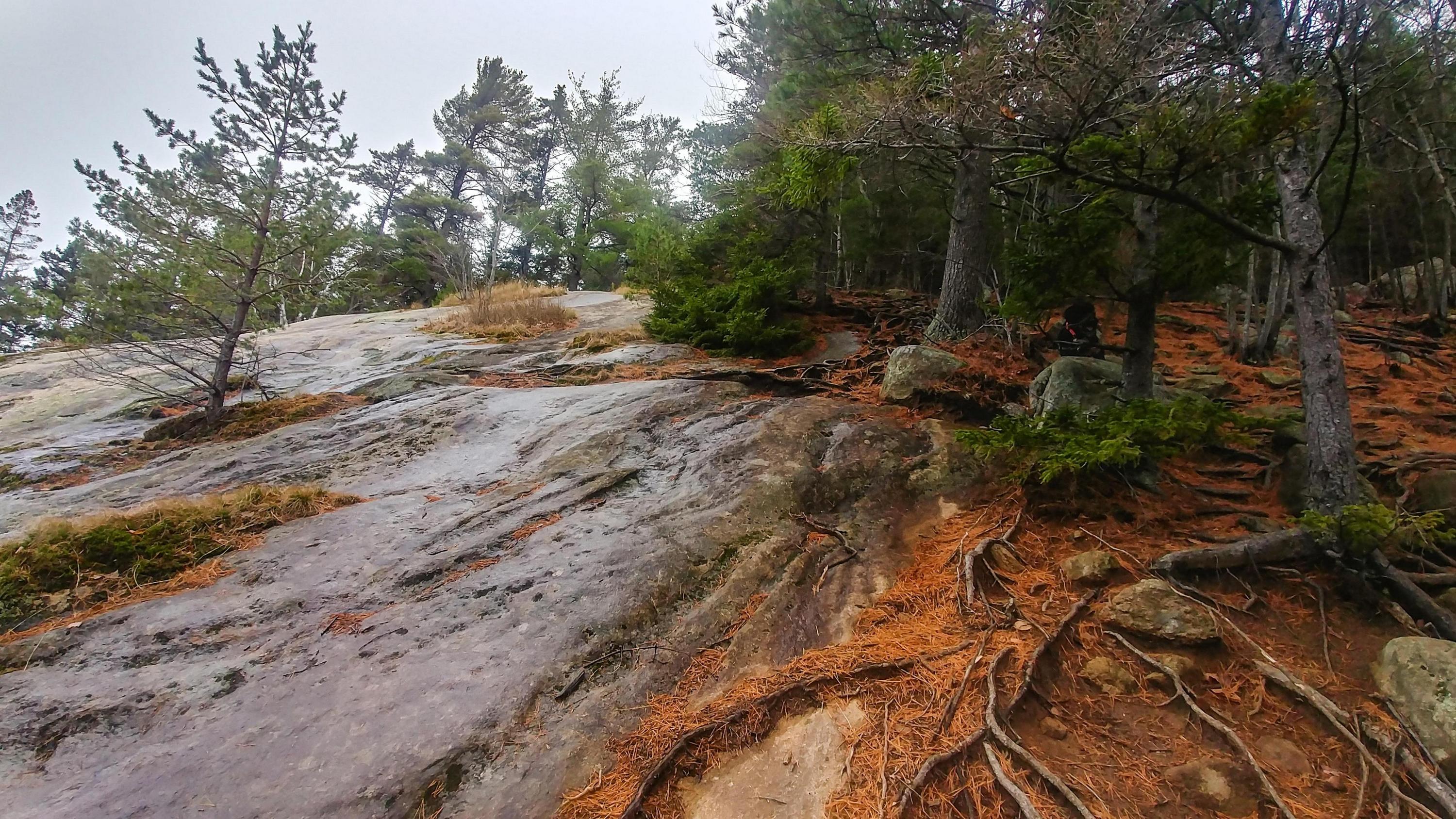 As I dragged my muddy keister up that slope, I turned at the top to see my first views of the day. 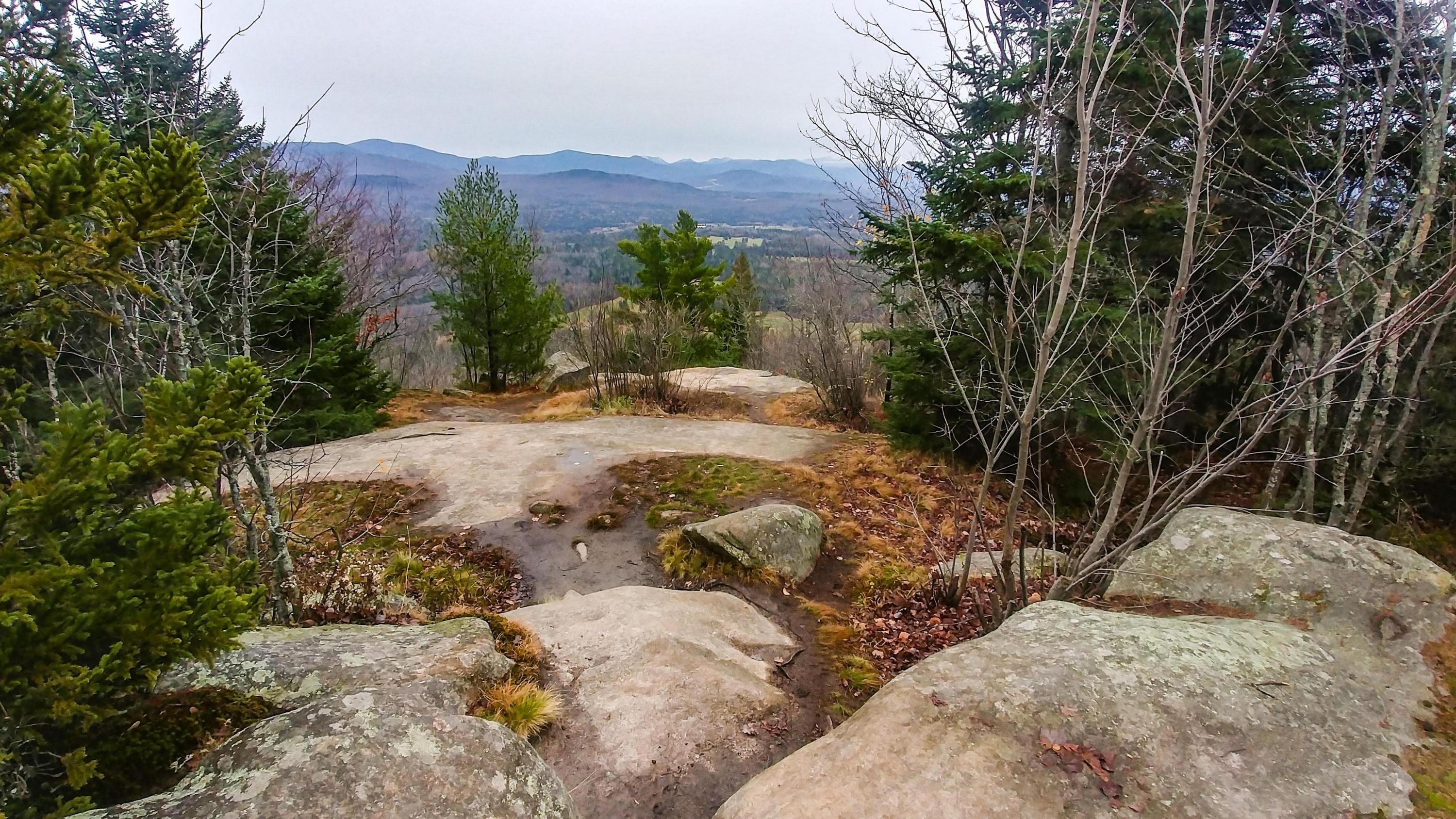 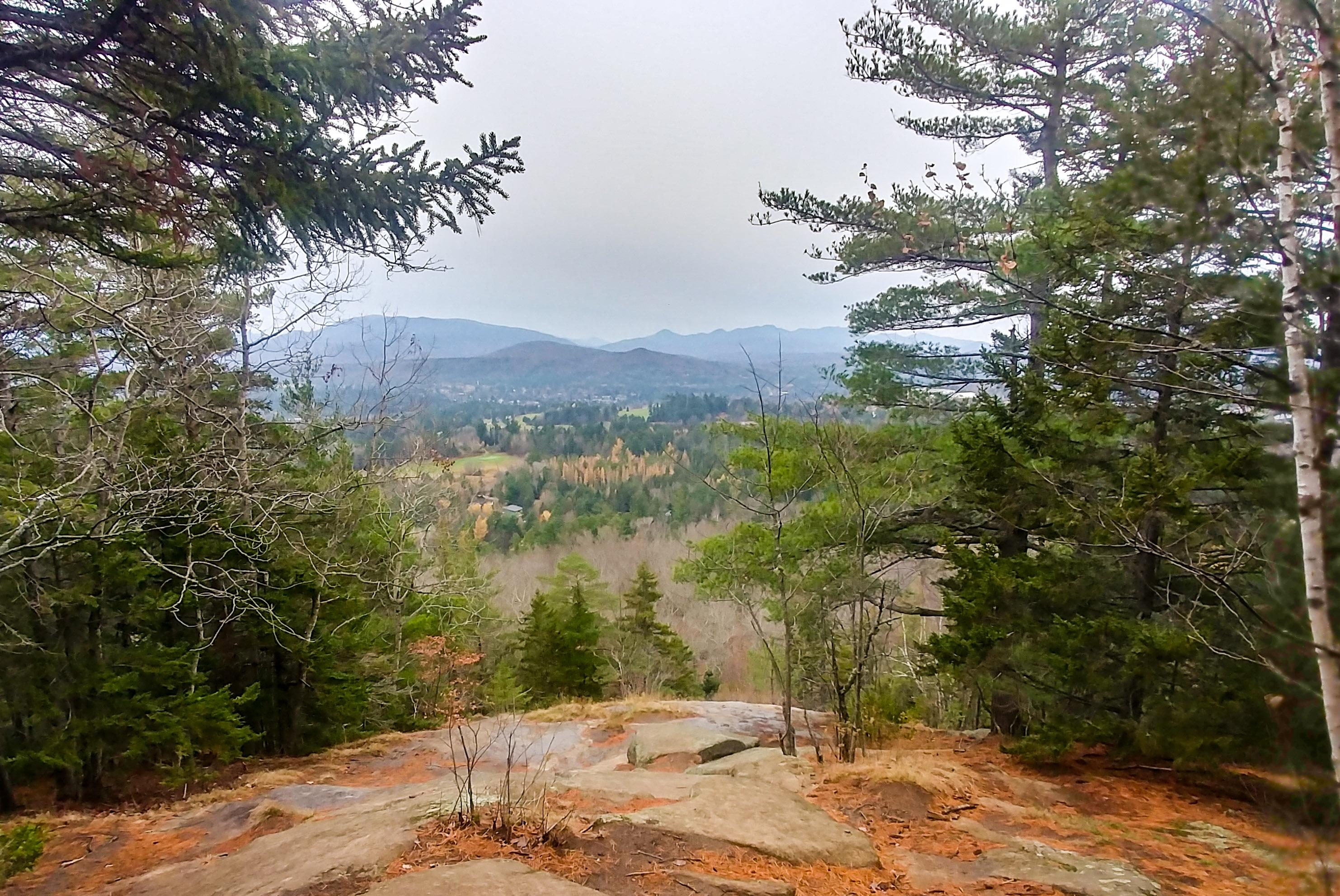 Once atop the steep section, I could see where the other gentler trail merged on the left. After that it was just a hop and a skip to the summit, where I threw my things down and strode to a flat spot to stretch my legs and enjoy the view. 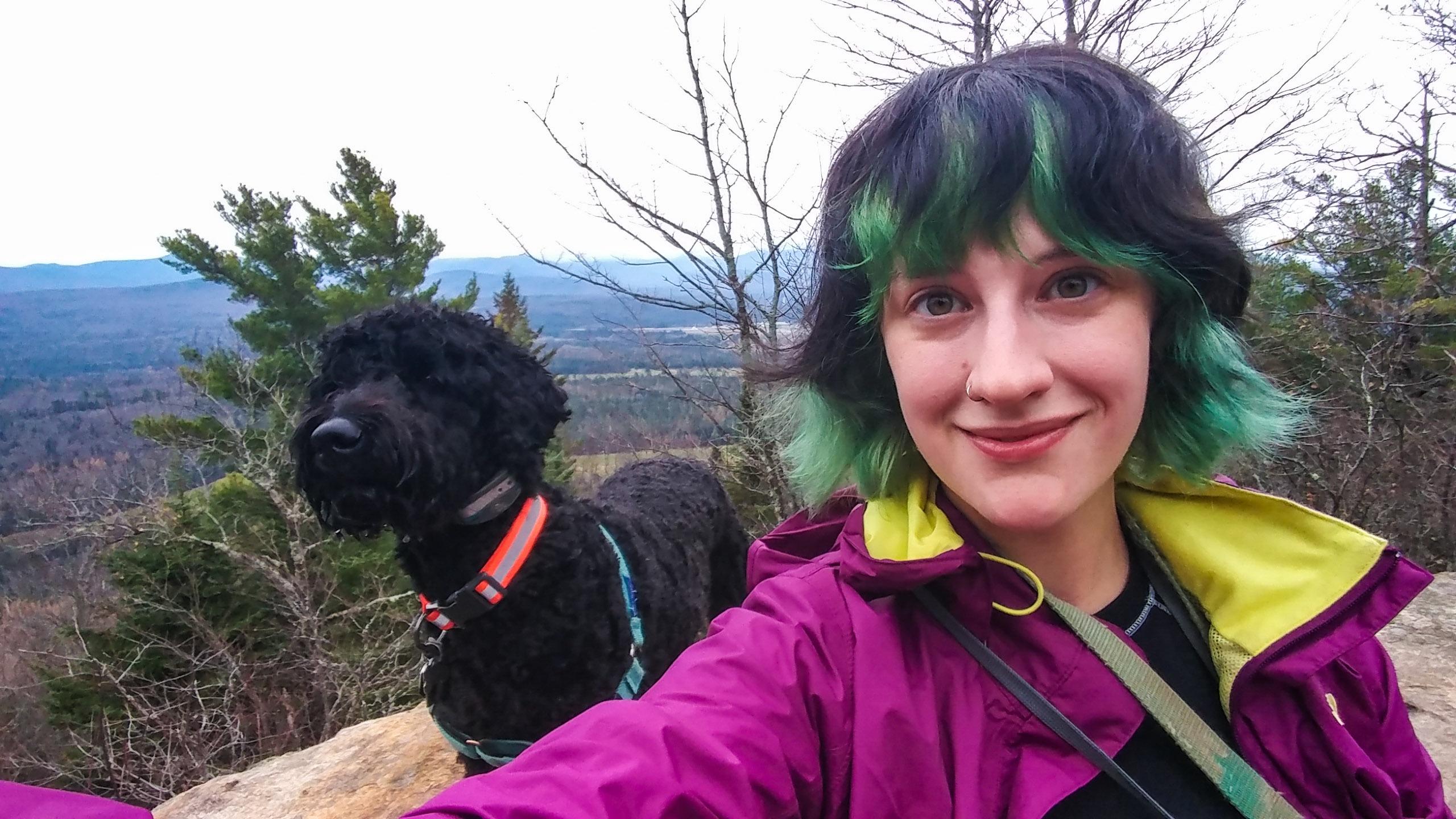 Clouds steadily rolled in, obscuring the white-capped peaks in the distance beyond the Lake Placid ski jumps. Juno and I sat and had our snack and greeted a young man who had run up the trail. I could tell that Juno desperately wanted to say hi to him, and after getting his O.K, she gave him a muddy tail-wagging greeting. 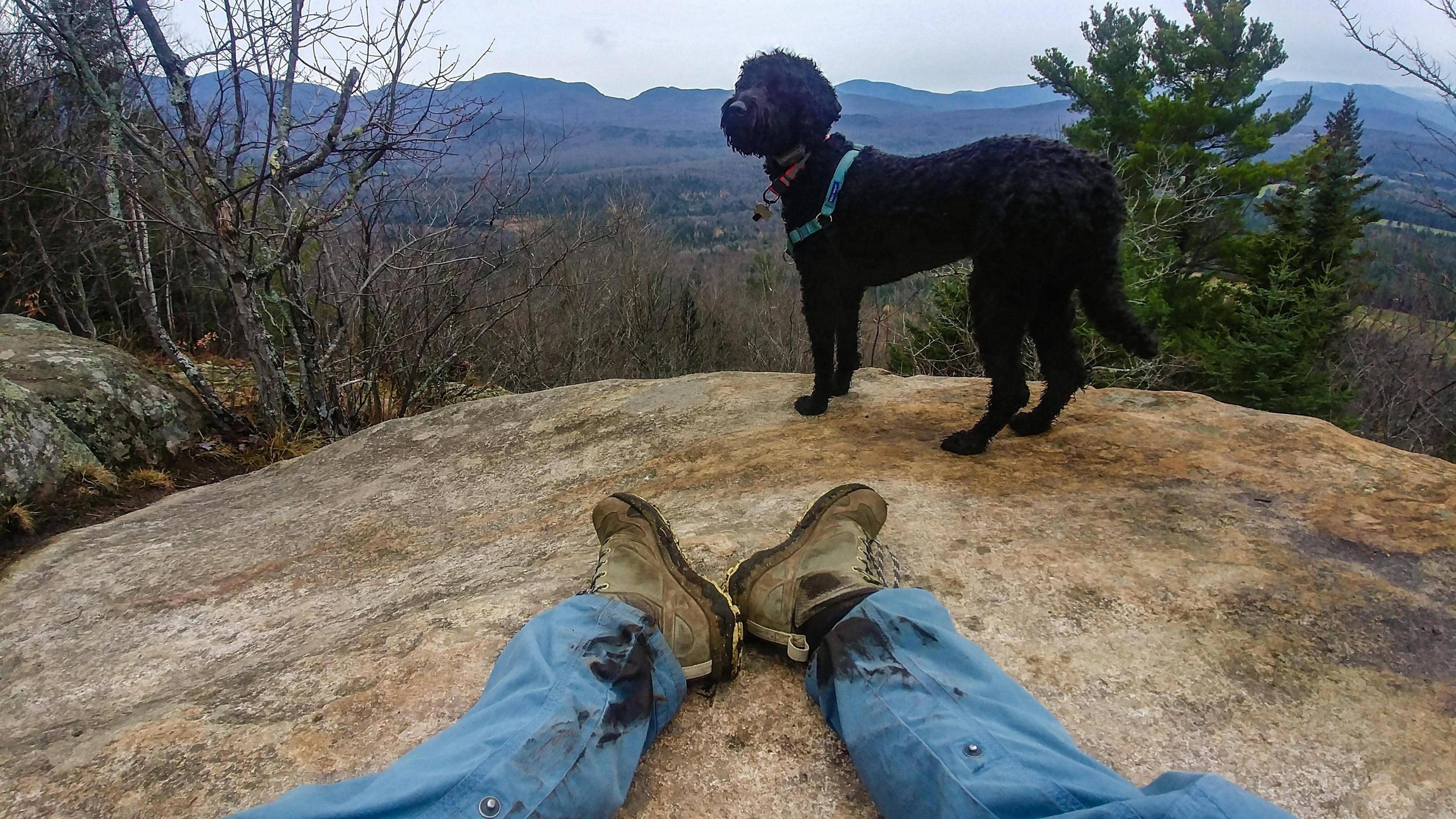 We took our leave at about 11:45am. Instead of going back down the slippery steep slope, we turned to go down the gentler grade that would follow around echo lake. I love this time of the year, the barrier between summer and winter, when the trees are bare but the ground is still covered in verdant life in contrast with the backdrop of snow in the peaks. 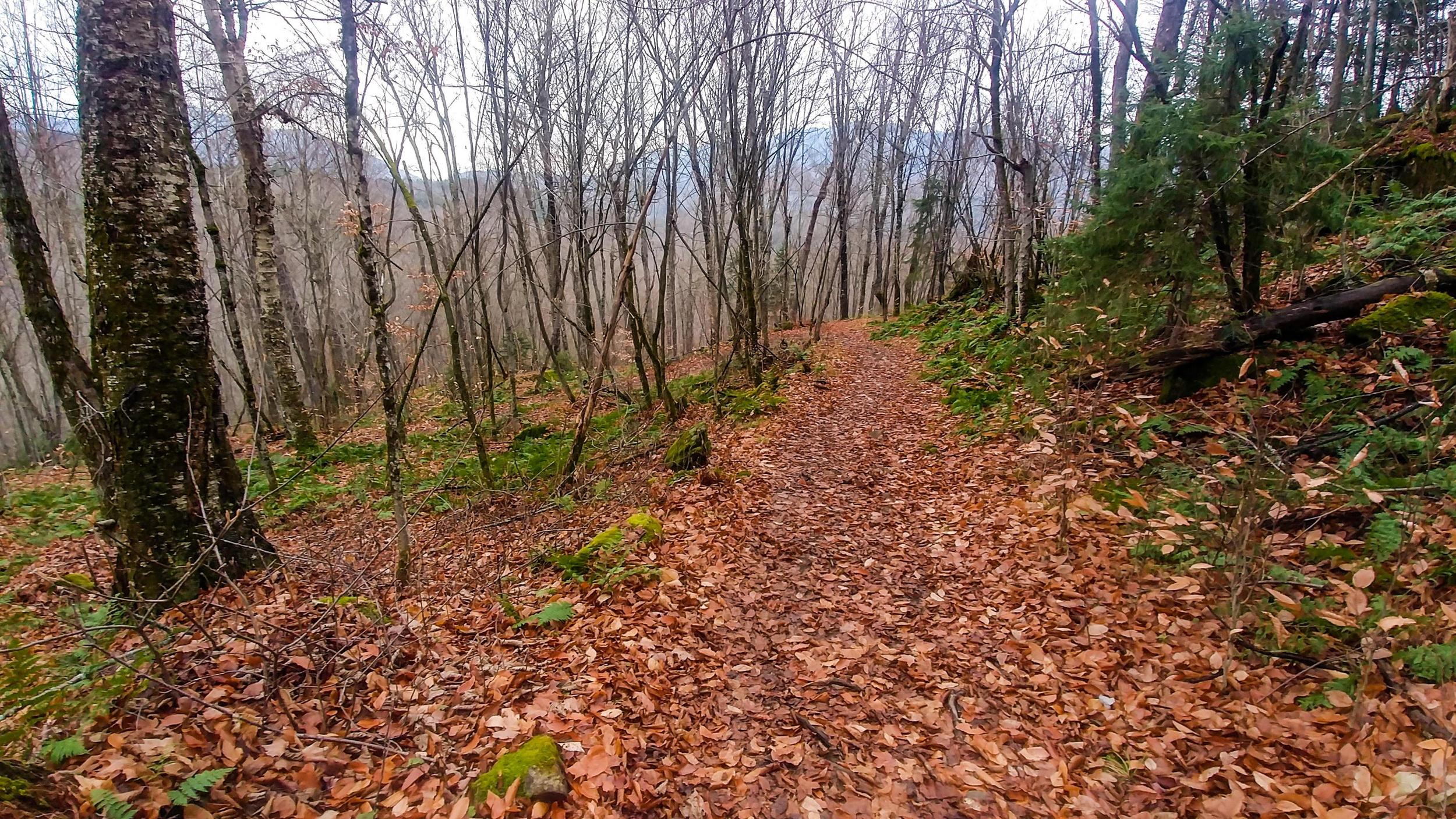 Along the way I encountered only 1 or 2 pairs of people. The second set seemed ill-prepared, and thought the gentler ascent was still too steep. I warned them that the top is slick with rain, and hoped for the best for them before carrying on my way. Before long, I reached the edge of Echo Lake! Juno and I stopped at just about every clearing to admire the still water. 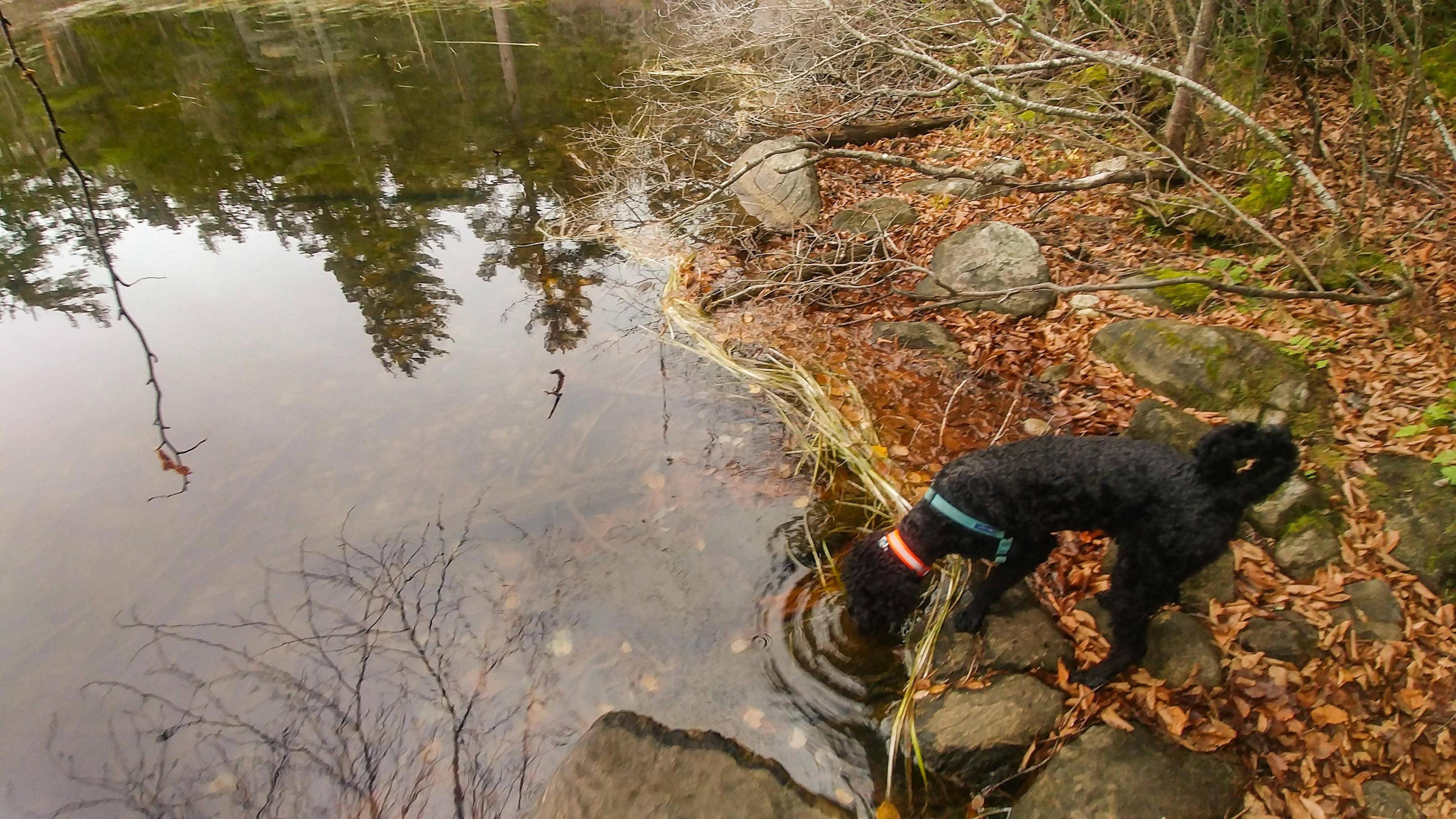 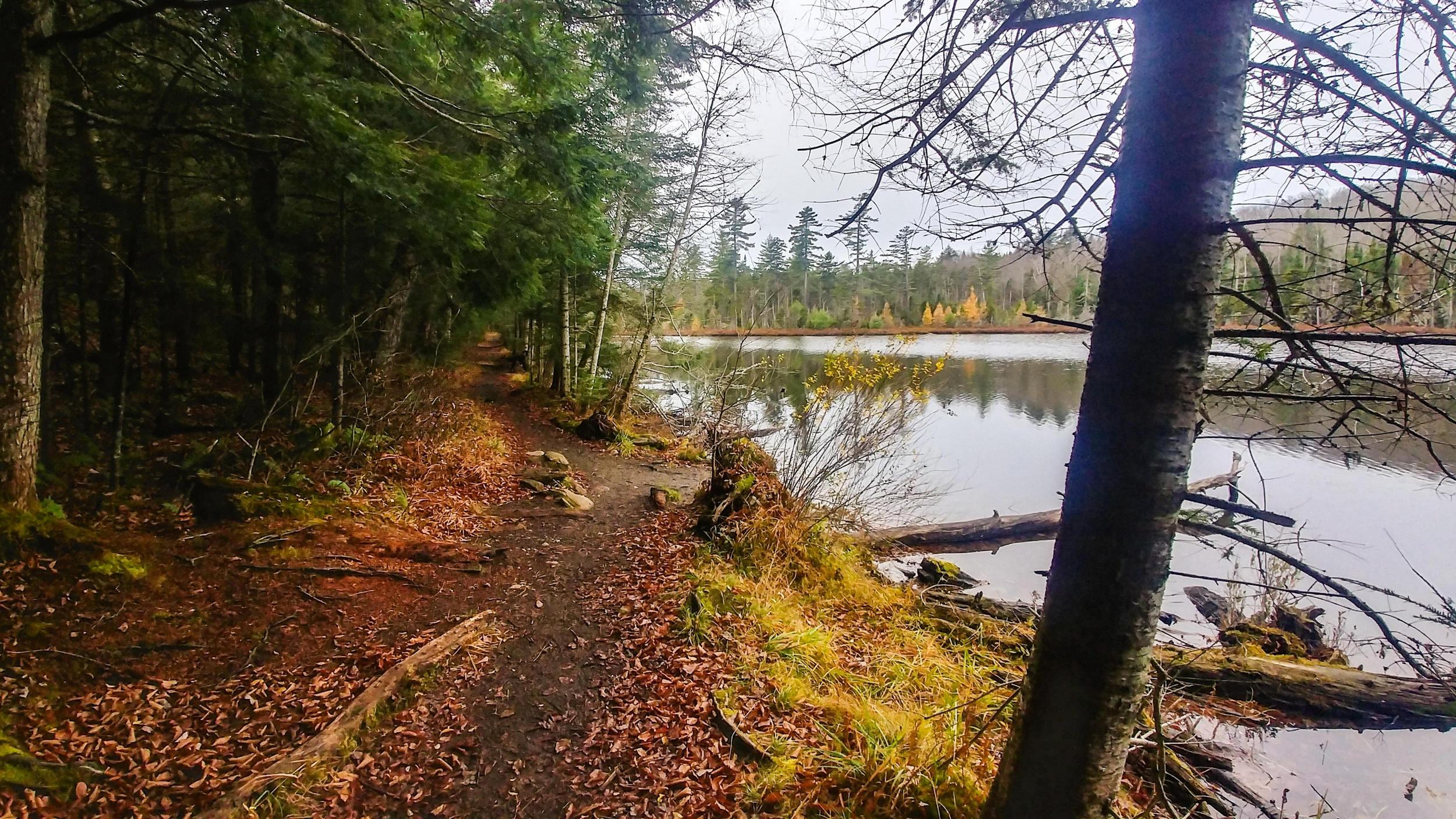 Just after this point, we were back to the beginning of the loop, following the trail through a bizarre plot of land where a house was being built. We met several more groups of people along the way before we reached the register, and chose at that point to take the side trail to another private road instead of walking through the school grounds again in an attempt to avoid more people.

So ended our walk up Cobble Hill. Juno and I hobbled our way along the sidewalk for the mile back to the car. I felt distinctly out of place among the nice-dressed joggers and strollers making their way around mirror lake, with my wet pack, trekking poles, and muddy muddy pants. When we reached the car at about 1pm. I stretched my legs for 45 minutes before deciding that I would be able to make it up Baxter too; pain or not, I would finish the 9ers today.

One thought on “Cobble Hill”