05/06/18
I woke up on this Sunday morning itching for a hike. So around 1pm I loaded up my pack, called my hiking buddy, and we hit the road. I was originally planning on hiking St. Regis mountain, but when we pulled up to the trailhead there were several cars still there and I was in a mood to be away from people. So instead we parked at the trailhead on the opposite side of the road and headed into the VIC trails to climb Jenkins Mountain. There were a few people finishing up a fishing adventure, but the lot was otherwise empty, so we took our starting photos and headed off at about 3:00pm. 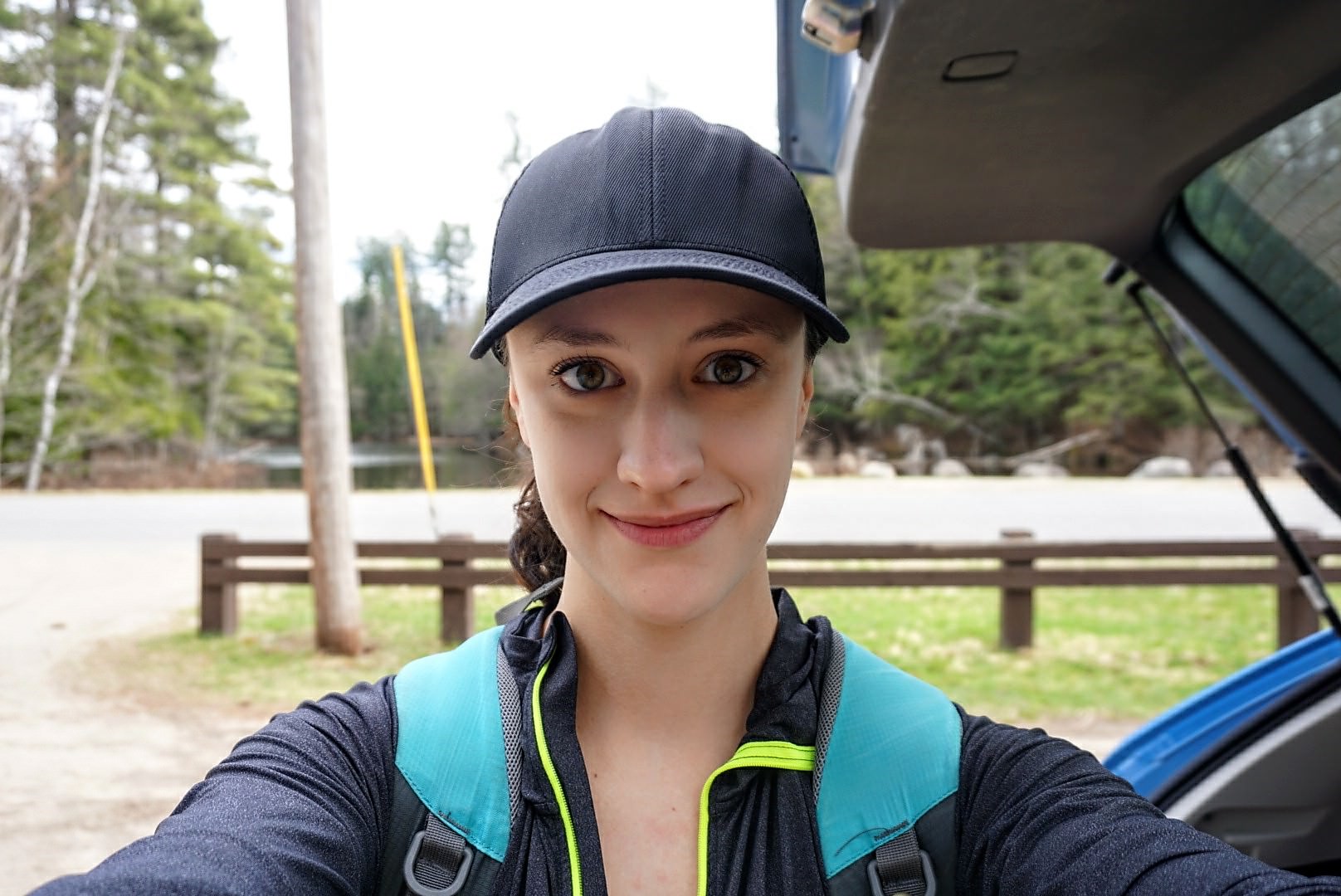 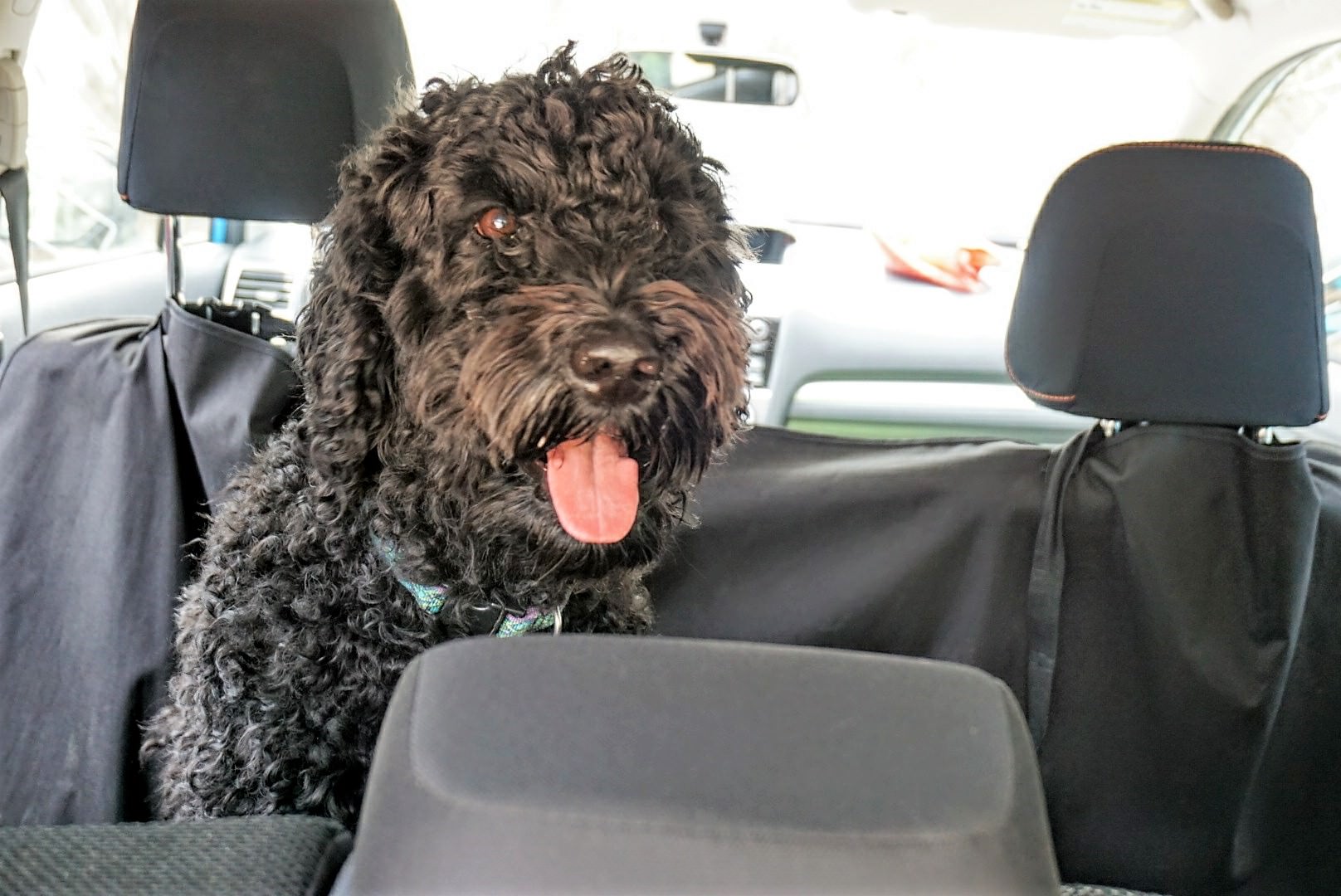 We stopped to sign in at the register and look at the map before leaving. The route we were taking is outlined in purple. We did end up taking an ill-advised shortcut, but more on that later. 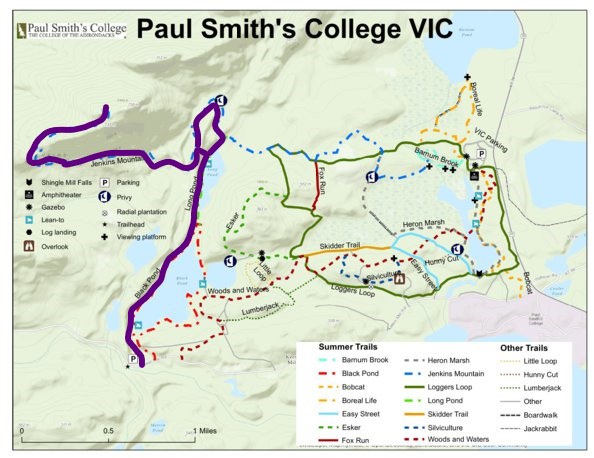 Right at the start of the trail is the beginning of Black Pond, so naturally Juno had to christen our hike with the first swim of the day. 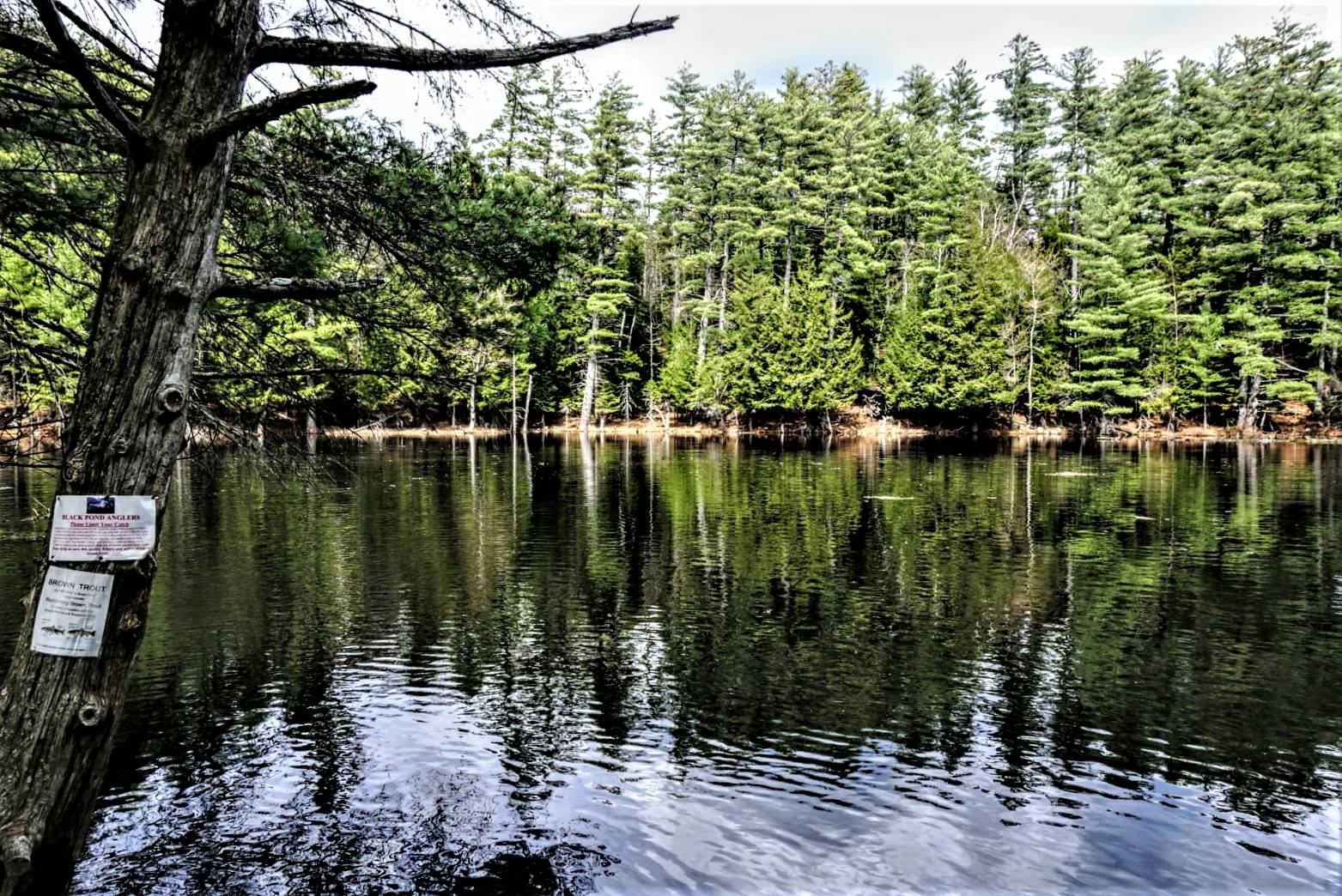 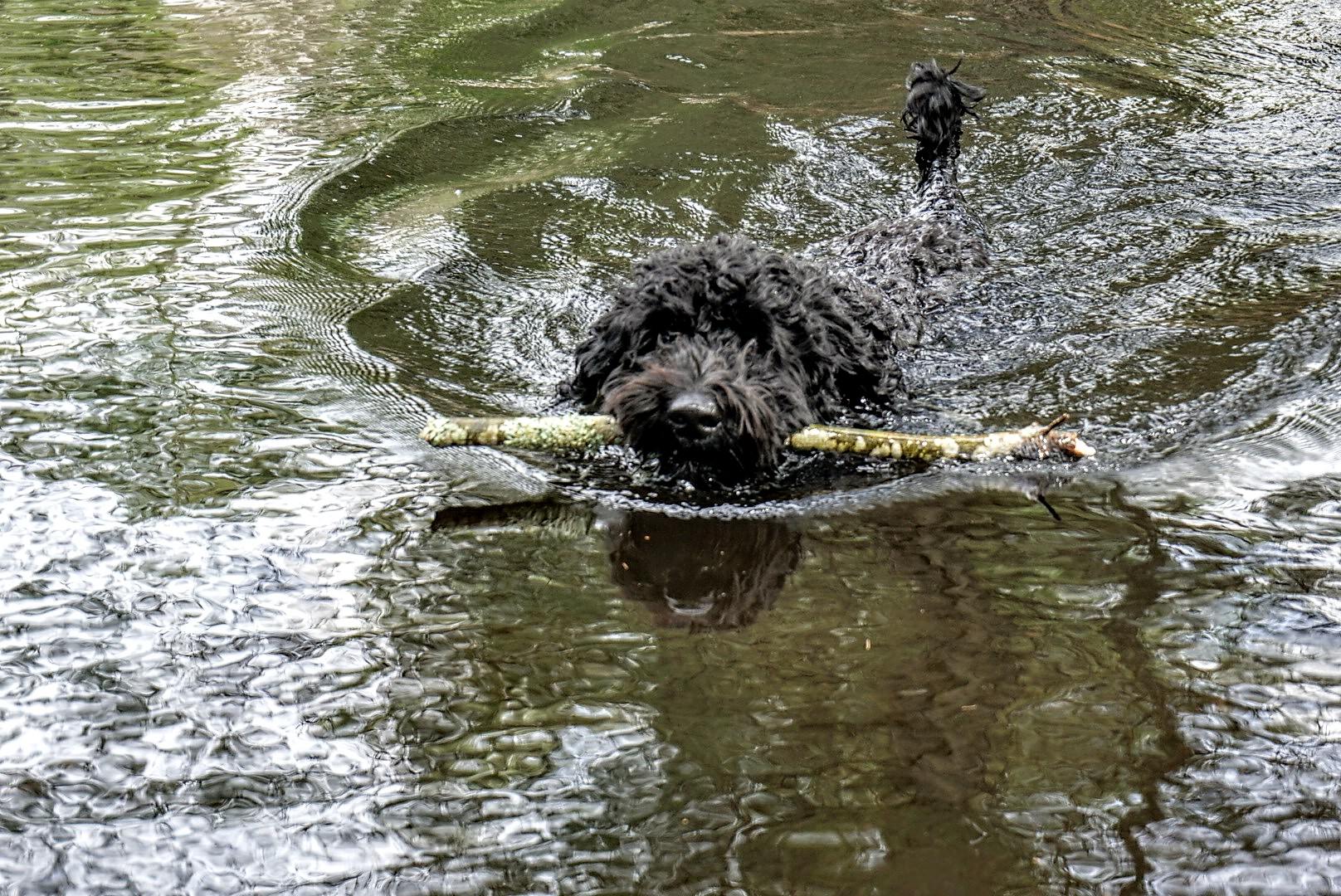 About 10 minutes later we reached the first lean-to on Black Pond. I keep saying I want to come here for stargazing some night, hopefully soon I’ll make it happen! 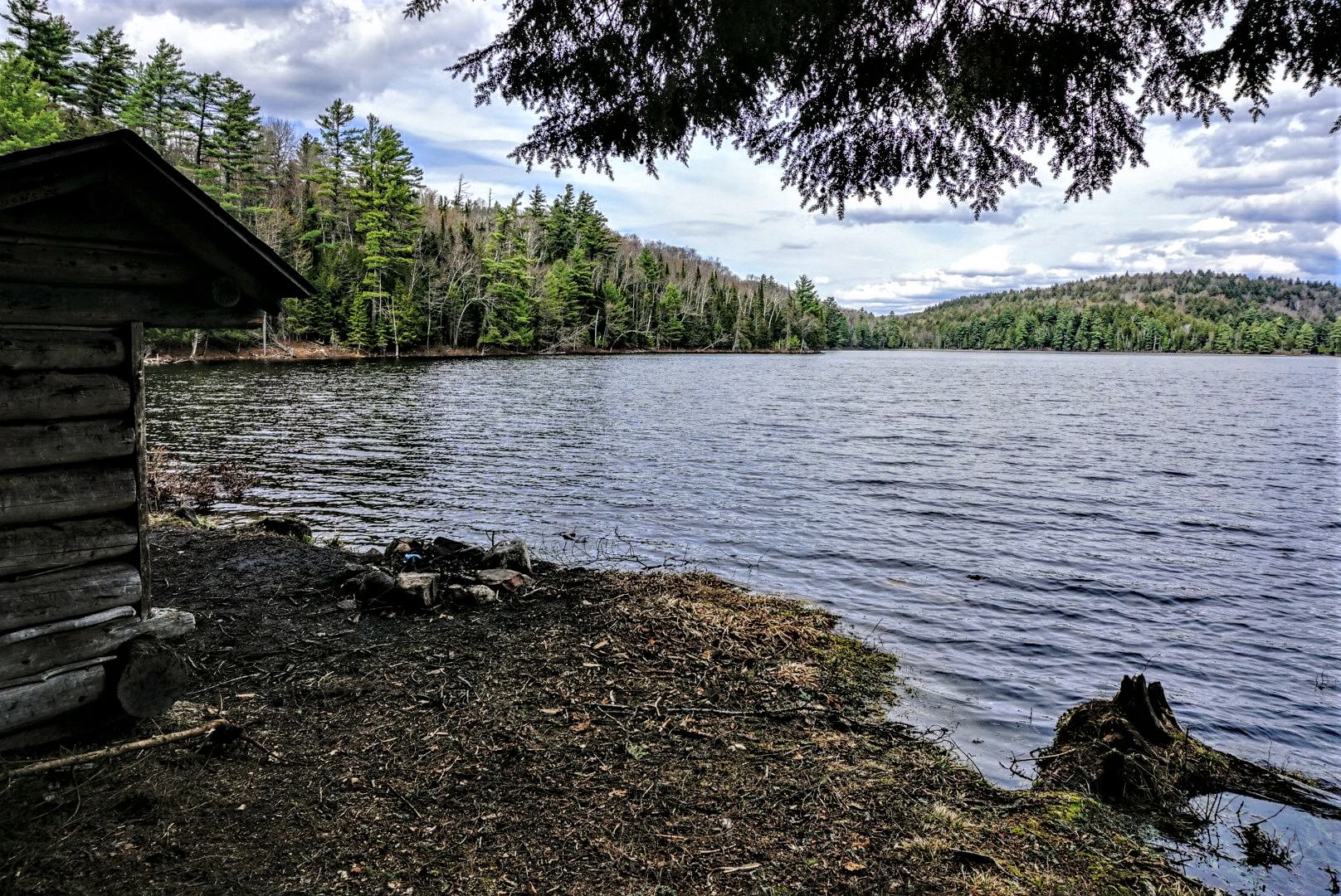 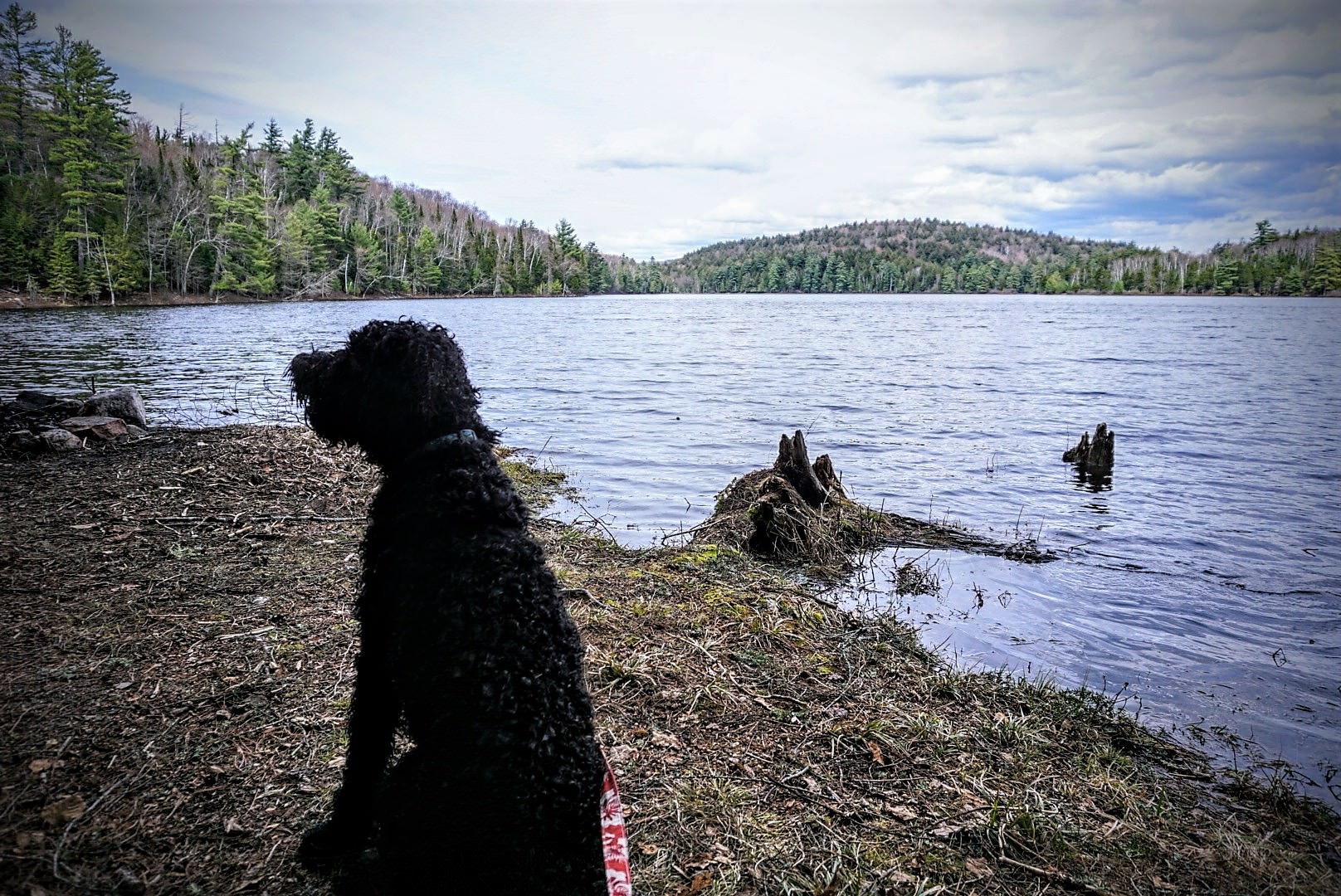 The trail was surprisingly dry, with only a few spots that were low enough to be flooded from the high water levels as we made our way around the pond. We stopped frequently to view the water and two loons that sporadically surfaced, only to disappear and reappear 5 minutes later halfway across the pond. 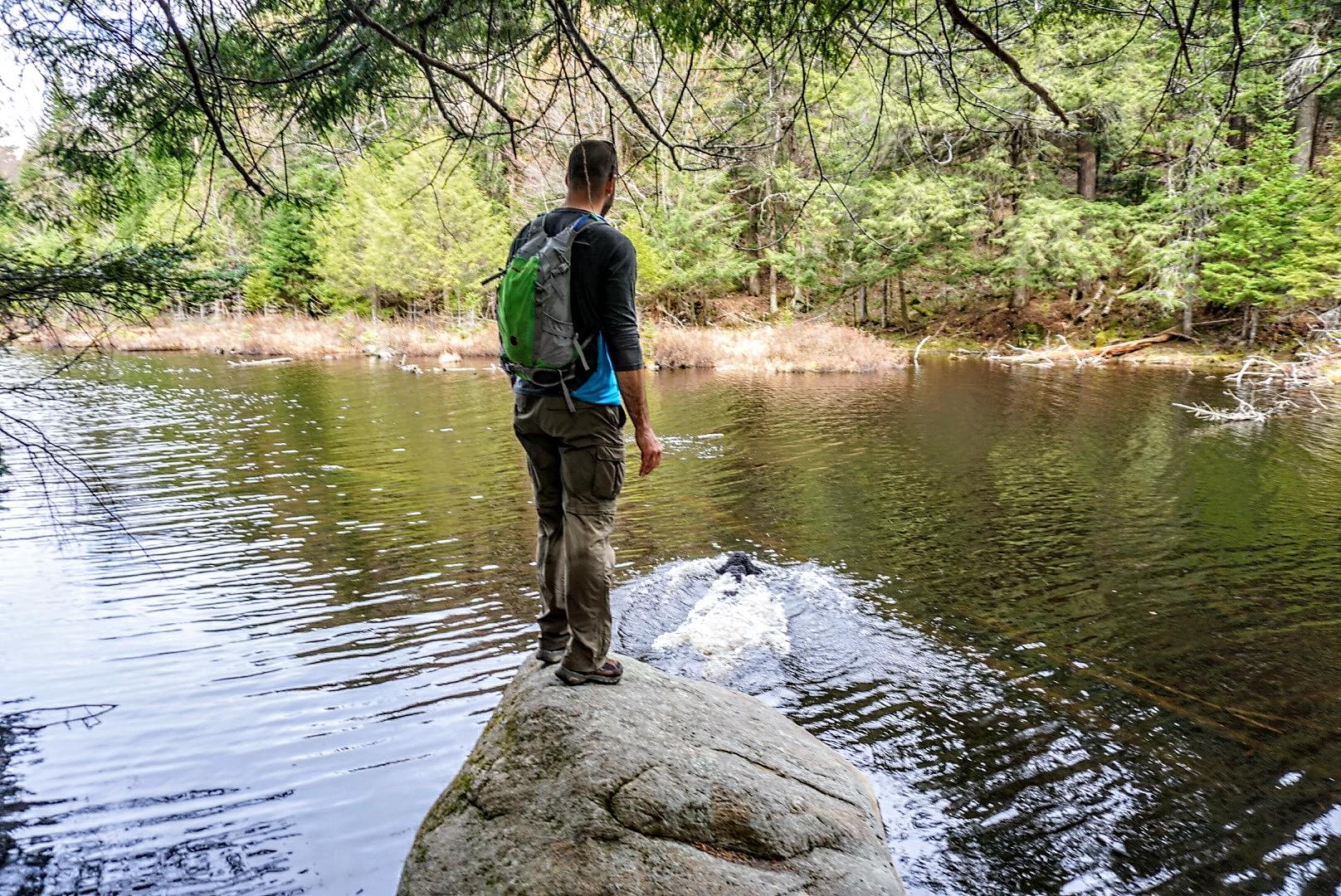 About half an hour later we reached the fish barrier dam between Black Pond and Long Pond, and continued straight to skirt Long Pond. Within about 5 feet along this trail we spotted 3 little snakes soaking in the sun in the middle of the path! Somehow Juno missed all of them….I’m not sure that my dog is, in fact, a dog. 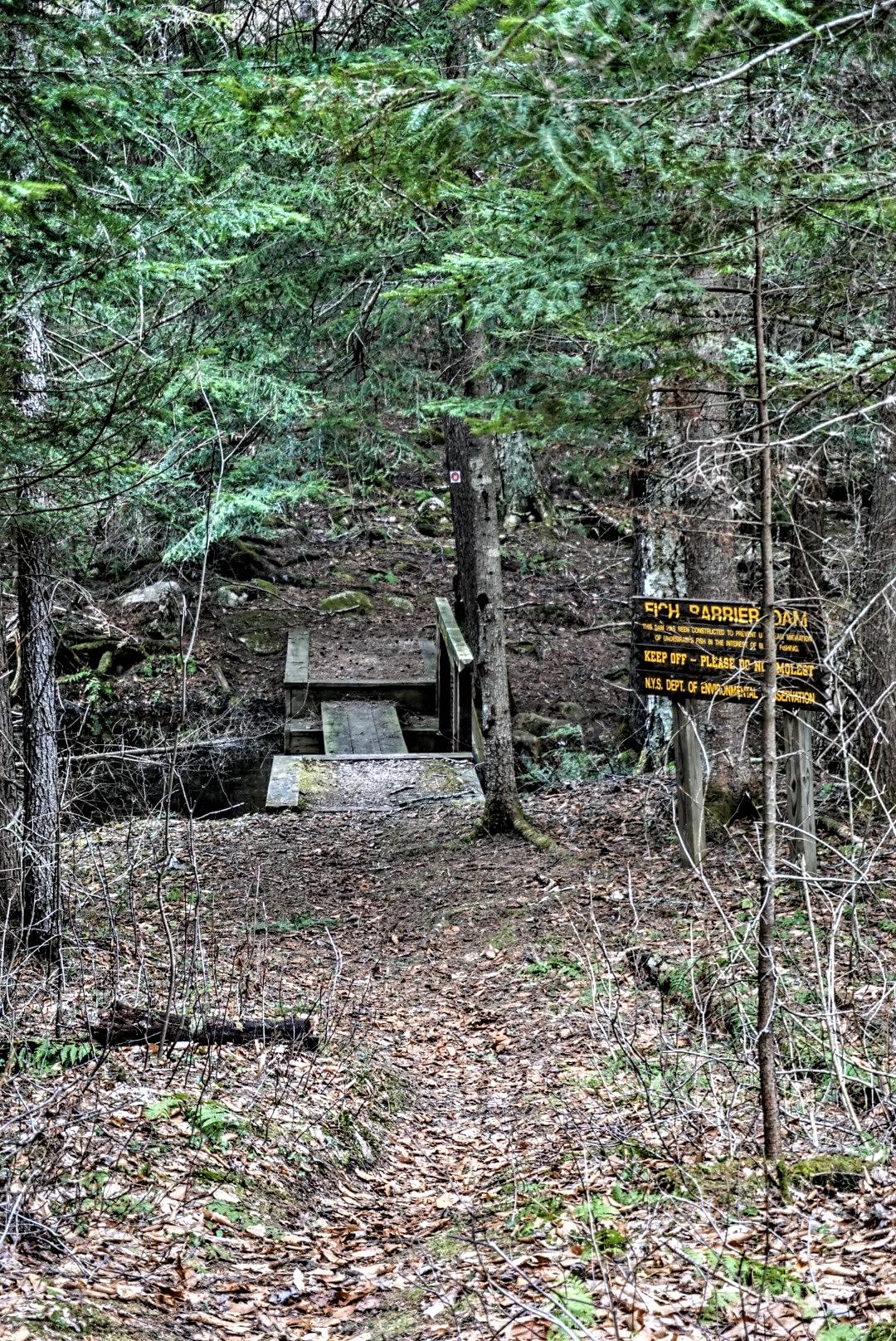 At 4:15pm, a little over an hour since we’d left the trailhead, we arrived at the Long Pond lean-to. We checked out the dock for a few minutes before discussing a shortcut we were curious about. 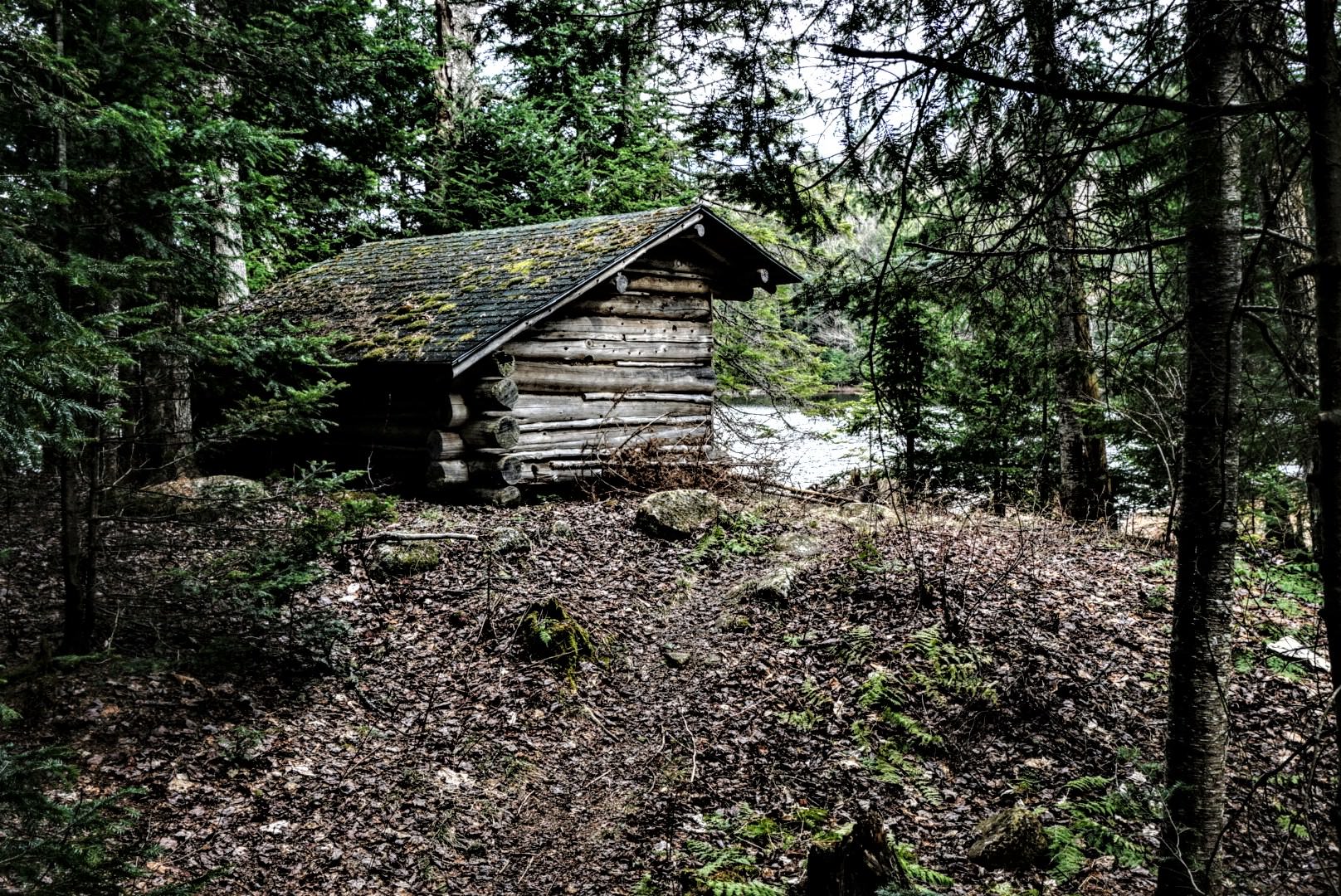 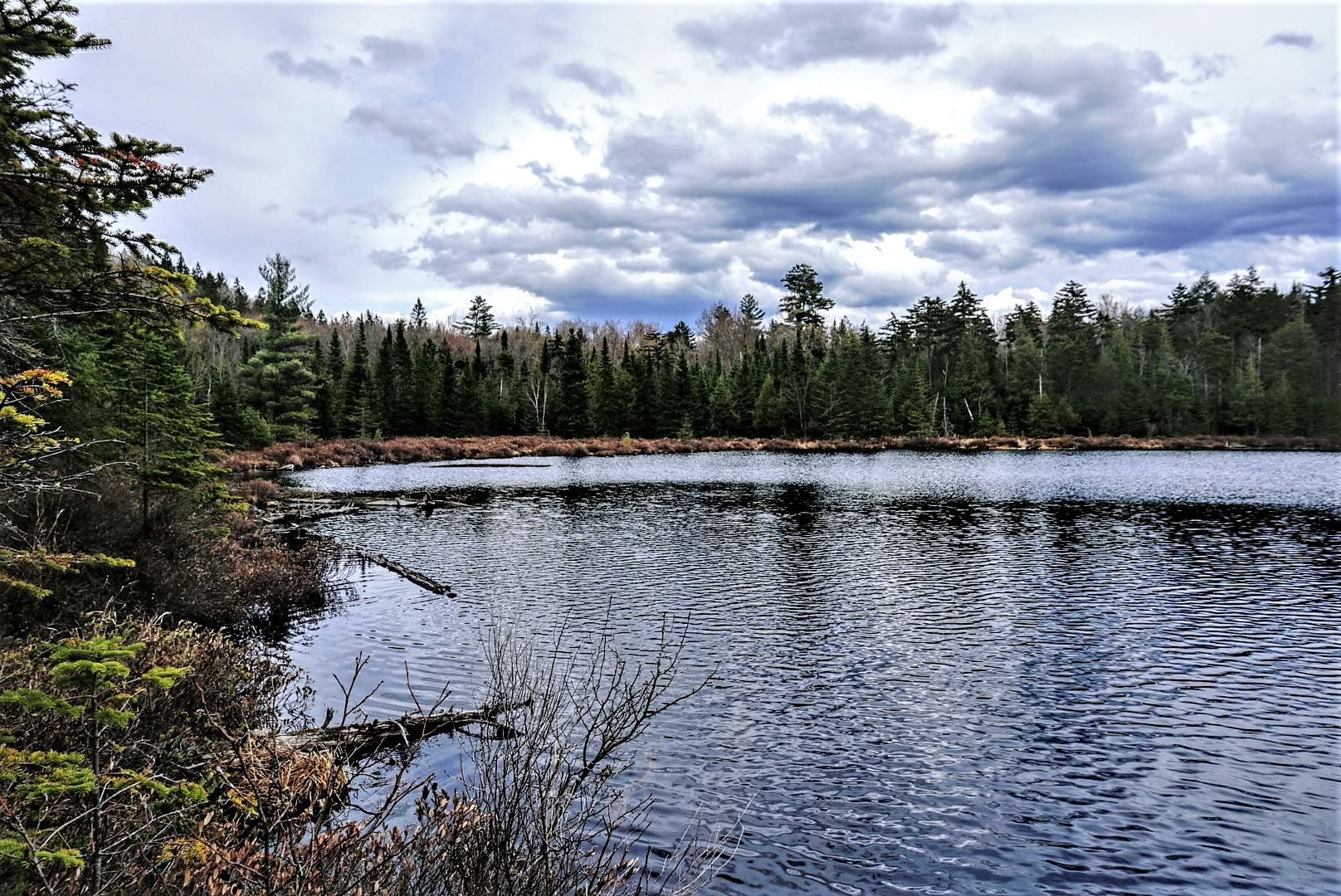 So we noticed on the map that there is a roundabout way to get from our path to the path up the mountain, so we decided to climb up to the ridge to cut out all of the extra path. We scrambled up the side of the ridge, past the privy, and reached the top….only to realize that we would have to descend the other side of the ridge and climb up another adjacent ridge to get back to the trail! I’d just like to state for the record that, while curious about a possible shortcut, it did occur to me that seemingly roundabout paths are usually that way for a reason. So now we know! 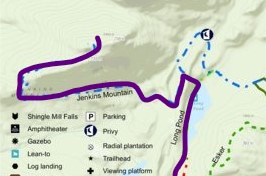 We followed this meandering path for quite a while, frequently wondering when on Earth we would start the climb, because up until this point we had been gently ascending and descending alternately. My hiking buddy continually vented frustration that the path was so inefficient, going for a mile in one direction without climbing at all before turning back in the other direction (see the map, haha). I, on the other hand, didn’t mind it. It was a ridiculously easy, gentle climb, and my knees were grateful. 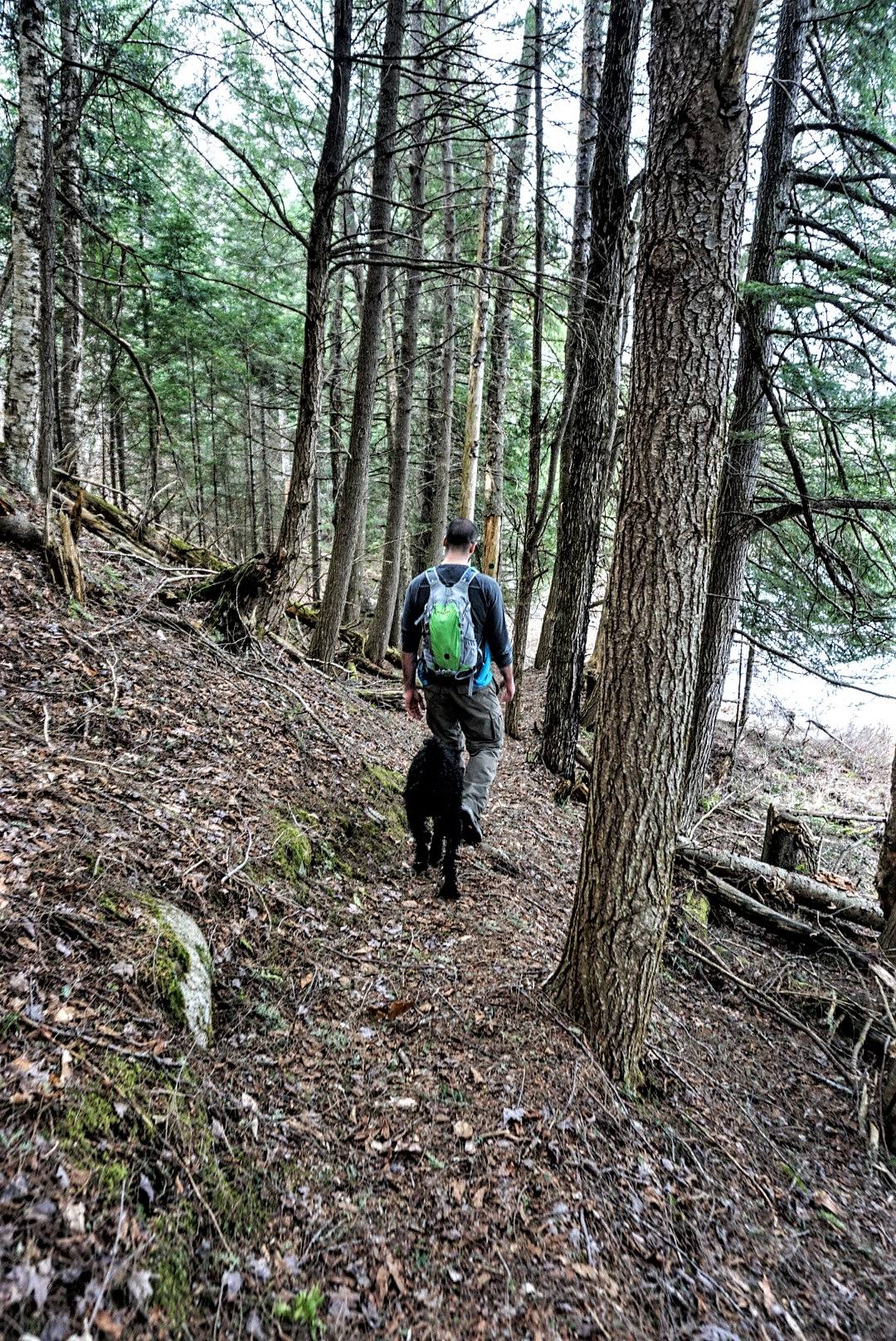 While the climb was very easy, it was made more difficult by all of the blowdown from the recent wind storms. We couldn’t walk 20 feet without having to navigate around fallen limbs and trees. My hiking buddy may have a future in trail work, as he stopped just about every time to clear the trail of debris. It definitely made the descent easier! There wasn’t much to photograph along this trail, besides the occasional teasing glimpse of a view through the trees. Finally, 3 hours after leaving the trailhead (remember that we stop constantly for photos and scenery-viewing…most normal people would have done this much faster!), we reached the last marker before the summit.

We scrambled up to the top to take in the views, have some snacks, and relax. 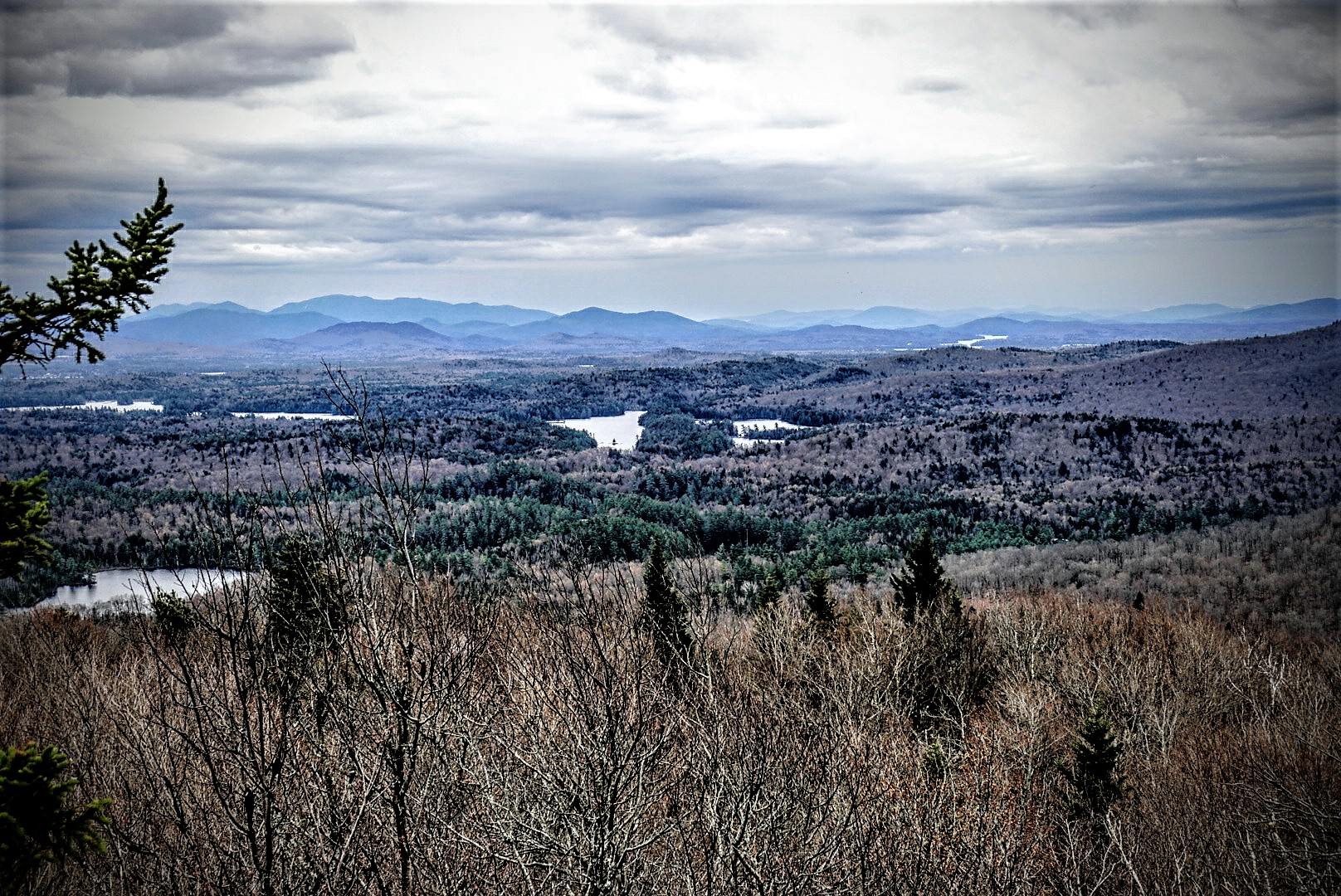 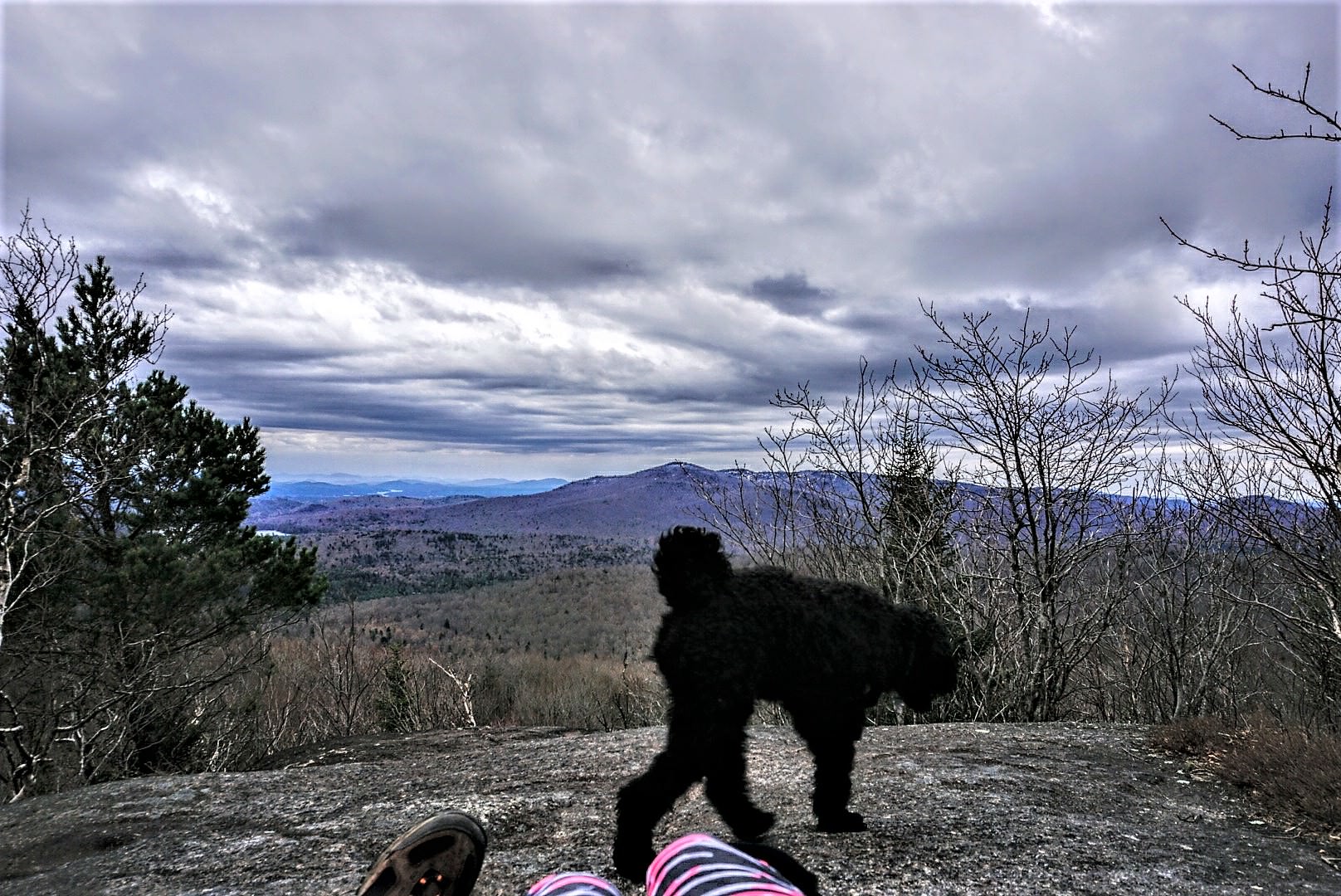 The views were way more than I was expecting! No one ever talks about this mountain, so I wasn’t sure what the summit would be like, but I was pleasantly surprised. 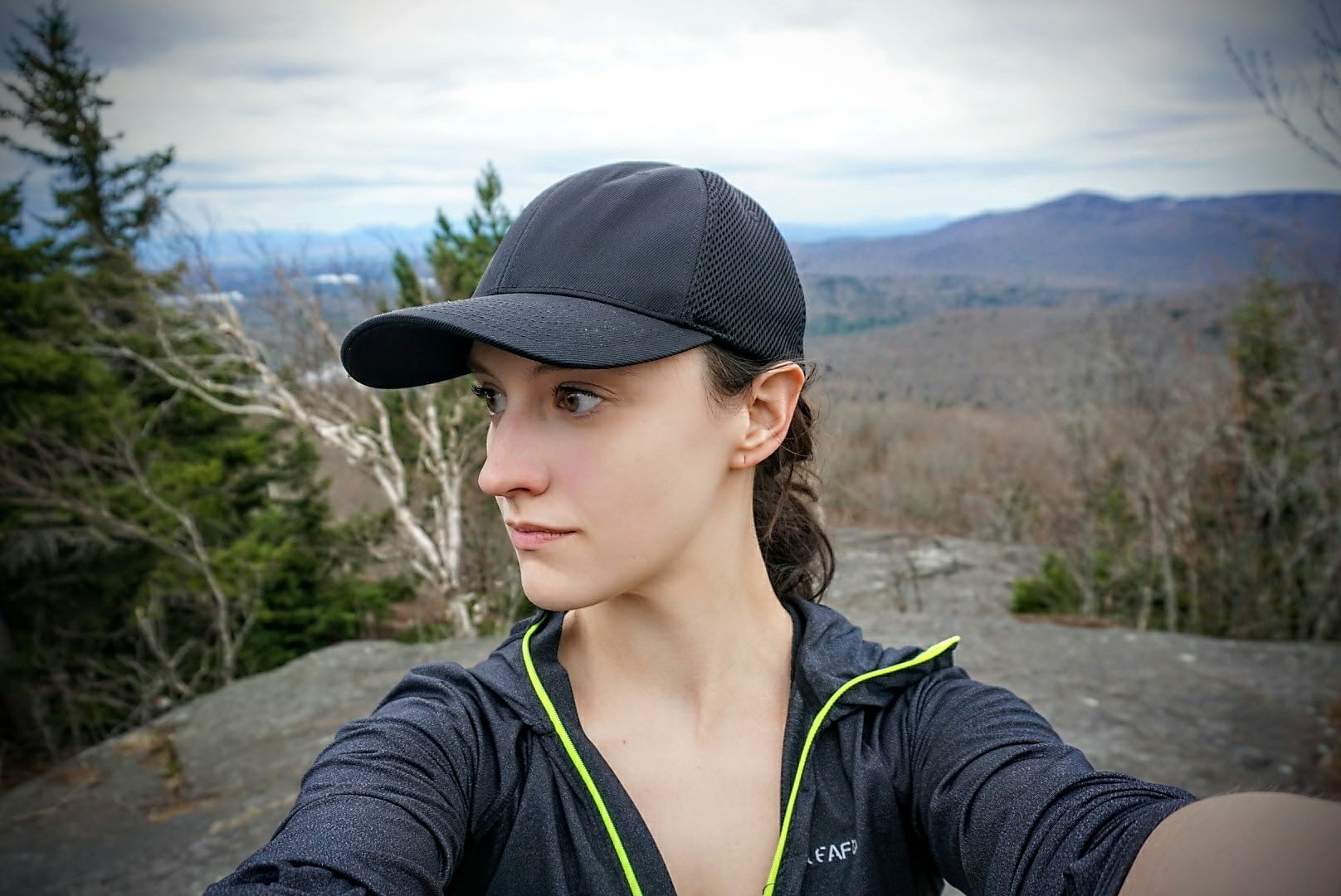 We hung out up here for about an hour. Upon realization that the sun was setting on the opposite side of the mountain and we wouldn’t be able to watch it, we decided to take our leave. The climb down seemed to take no time at all, and along the way we passed a few cool beaver ponds with frogs singing their cacophonous anthem all around us.

This time, we opted not to take our lovely shortcut but to follow the actual path, and we encountered this gem: 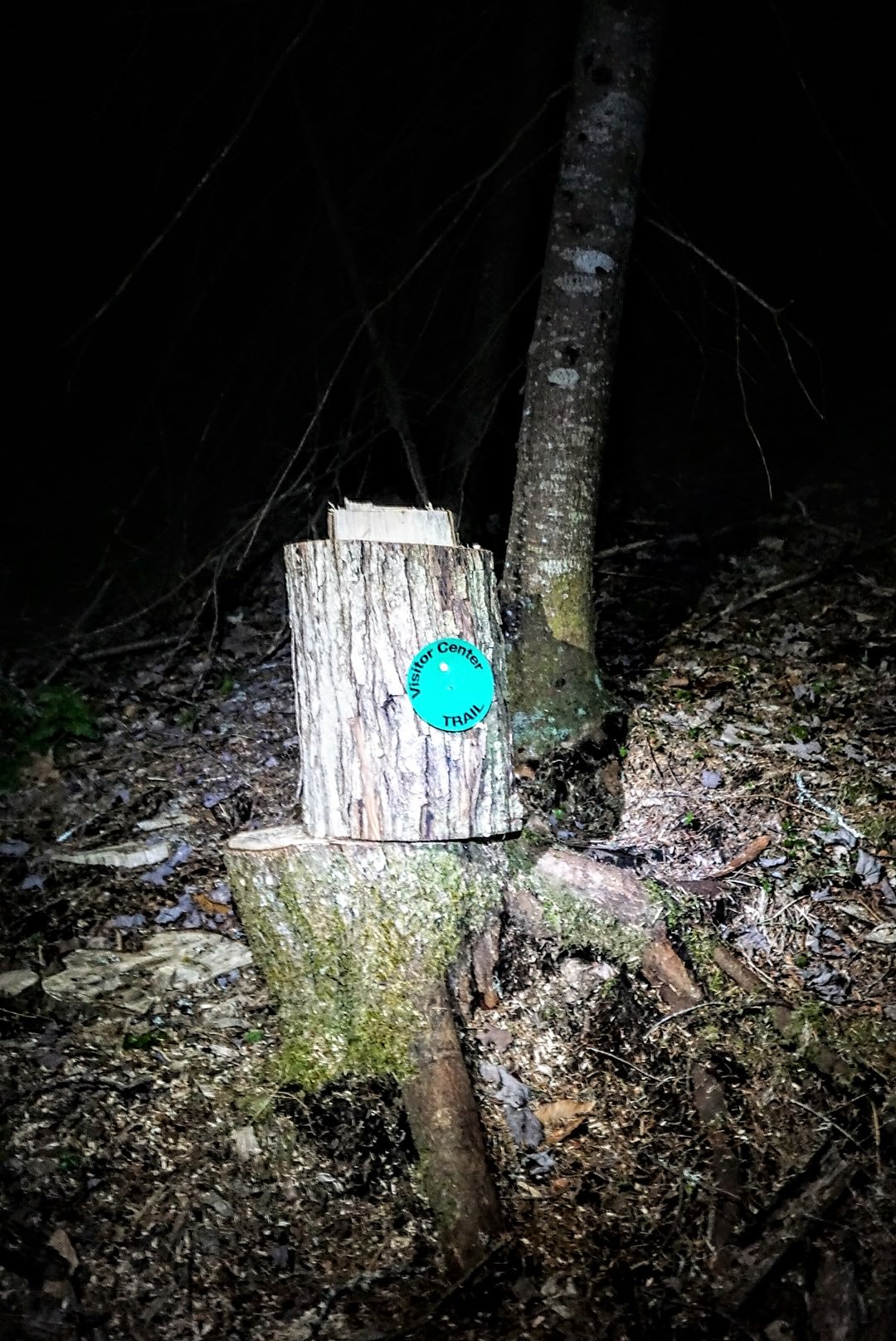 If you’re thinking, “Did a tree fall down, so they removed the section with the trail marker and placed it back on it’s stump?” Then you are correct! You win a pat on the back from yourself. This was so funny, I just had to take a picture. Soon after (9pm) we were back at the Long Pond lean-to checking out the dock again. 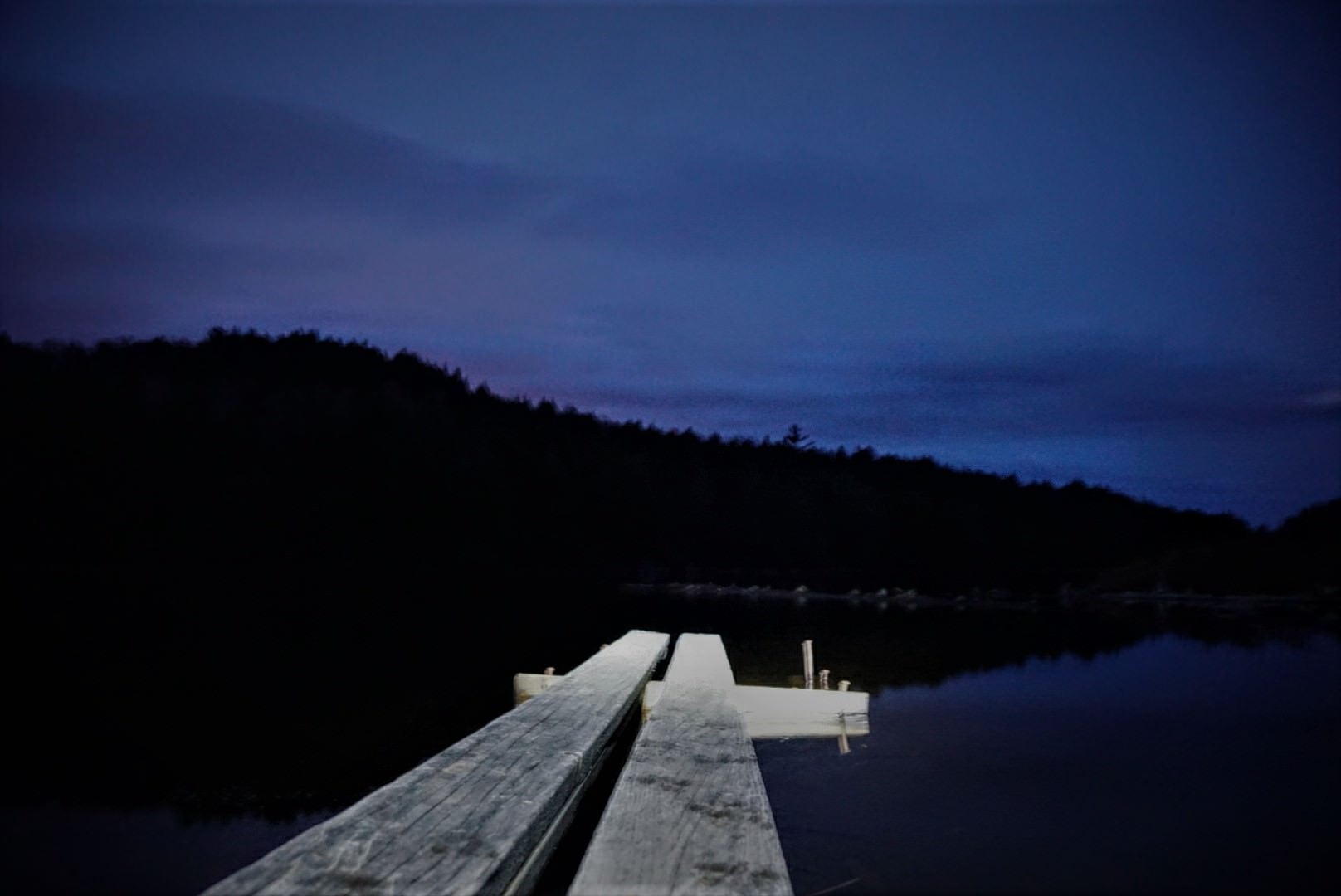 The hike out was enjoyable; I submerged my foot in water by making the rookie mistake of thinking a clod of grass in a flooded section of trail was stable, and we saw a MASSIVE salamander while walking on some flooded puncheon! Juno sensed my excitement (I mean it wasn’t hard, I was kind of shrieking in excitement) and started wailing and barking along with me, with NO CLUE WHATSOEVER why she was barking. I wasn’t able to get a picture before he scooted away, but luckily internet has plenty of pictures: 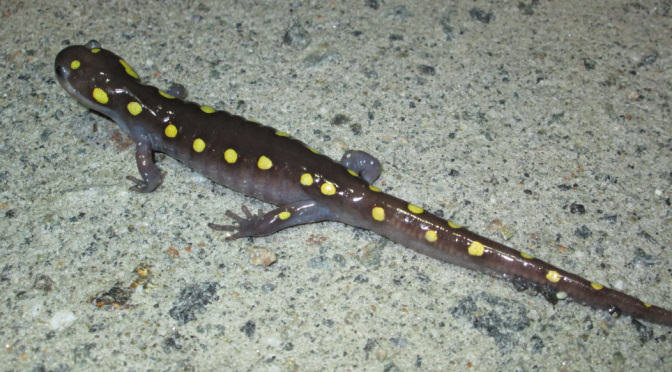 At 10pm we made out way back to the car, passing through another frog chorus so loud it left my ears ringing, and headed home. And hey, NO KNEE PAIN!!!!!! Woohoo!!

Jenkins Mountain: 2513′ Elevation Gain: ~900′ (? There are conflicting numbers for this, but 900 seems right)
Round Trip Distance: 8-9 miles
Total Duration: 7 hours (including 1 hour at summit and countless minutes putzing around)