After being sooo spoiled with amazing weather all weekend, I still hadn’t had enough when Monday rolled around and weather got even nicer. So, naturally, I left work early to go climb something. You might think to yourself, wow that’s irresponsible! But I had a great excuse — It was Juno’s 3rd birthday! What kind of parent would I be if I didn’t treat her to an amazing adventure? So come 3:30pm she and I set off to climb Azure Mountain. My knees are still not 100% so I didn’t want anything too arduous, and this seemed like the perfect option. We reached the trailhead at about 4:30pm and went along our merry way. 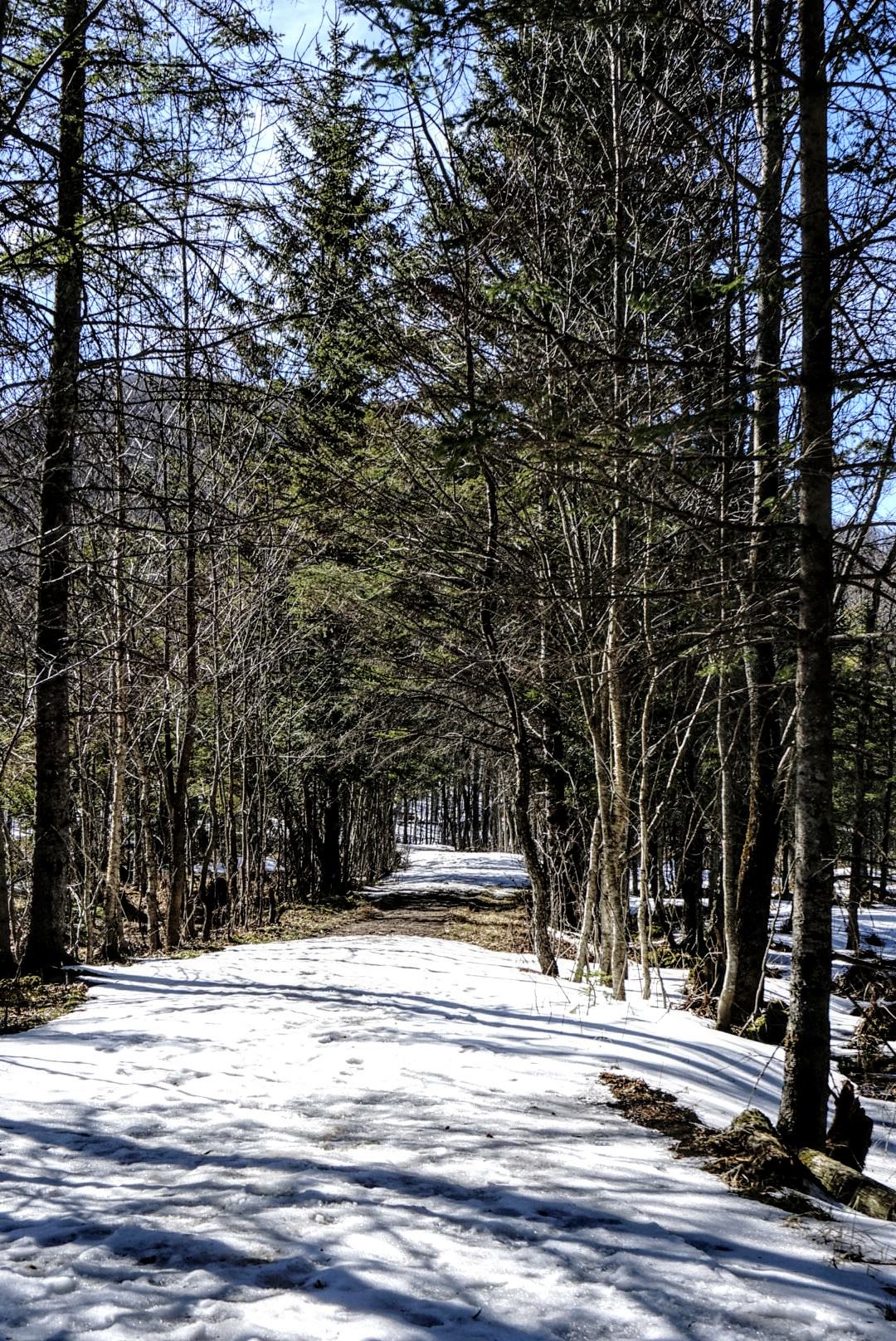 Almost immediately Juno shoved her face down into the snow and scooted herself around, tossing and rolling through it. Is…Is this normal for a dog, or….? Either way, it was so funny to watch!

We reached the trail register just a moment later. 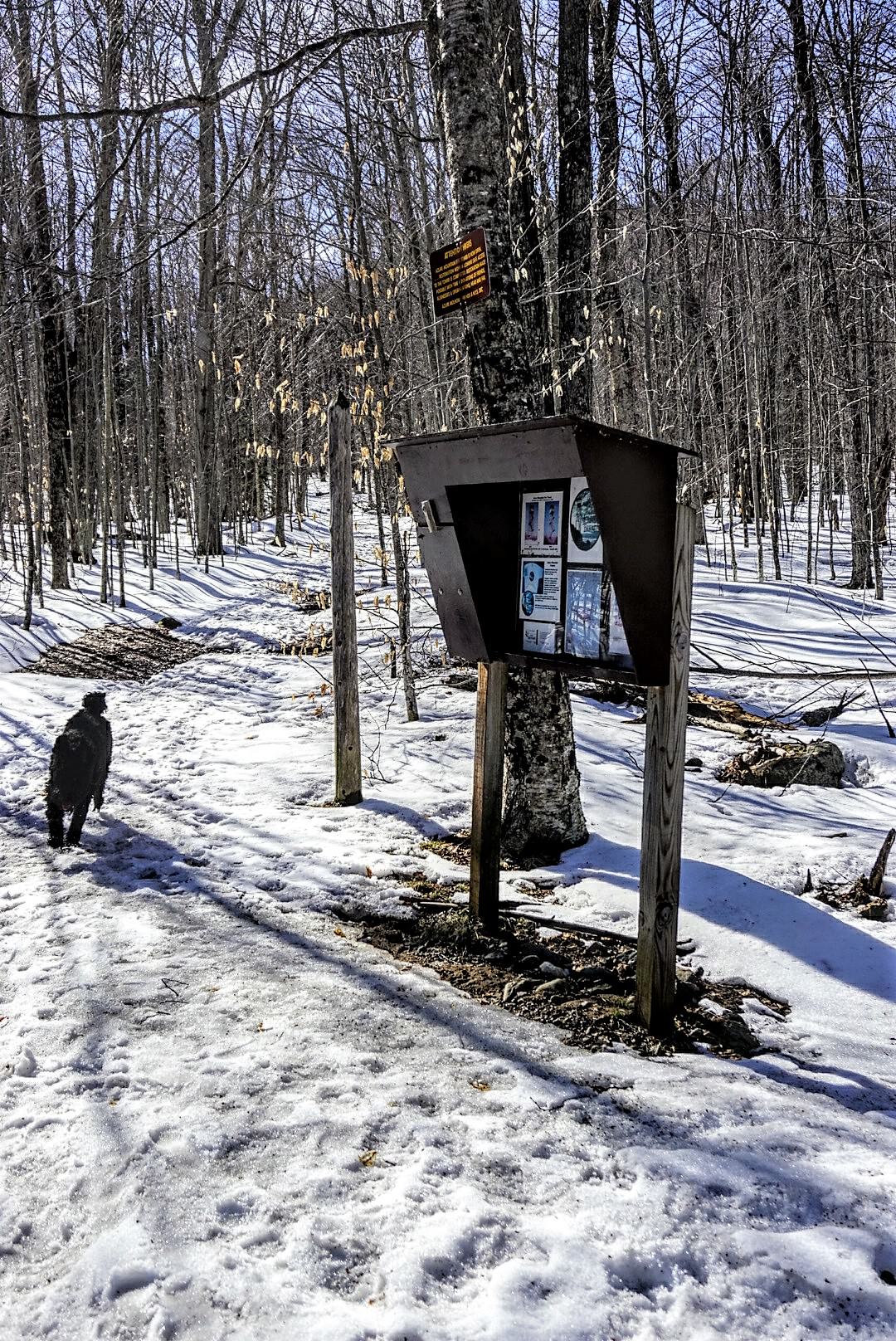 I couldn’t believe how much snow was still on the trail and in the woods! Luckily I had worn my gaitors because the snow quickly became a muddy creek, and I didn’t even bother trying to side-step it. 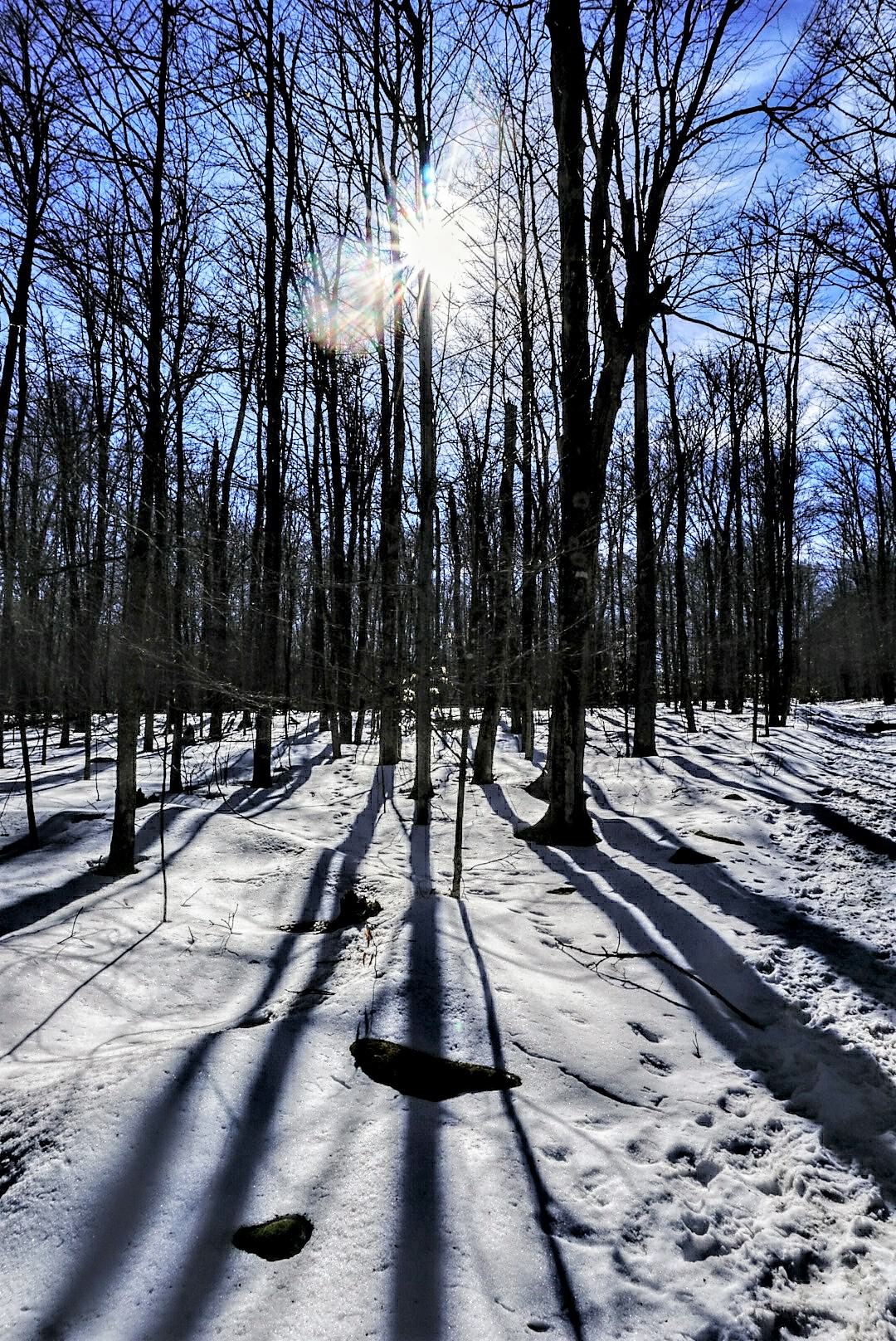 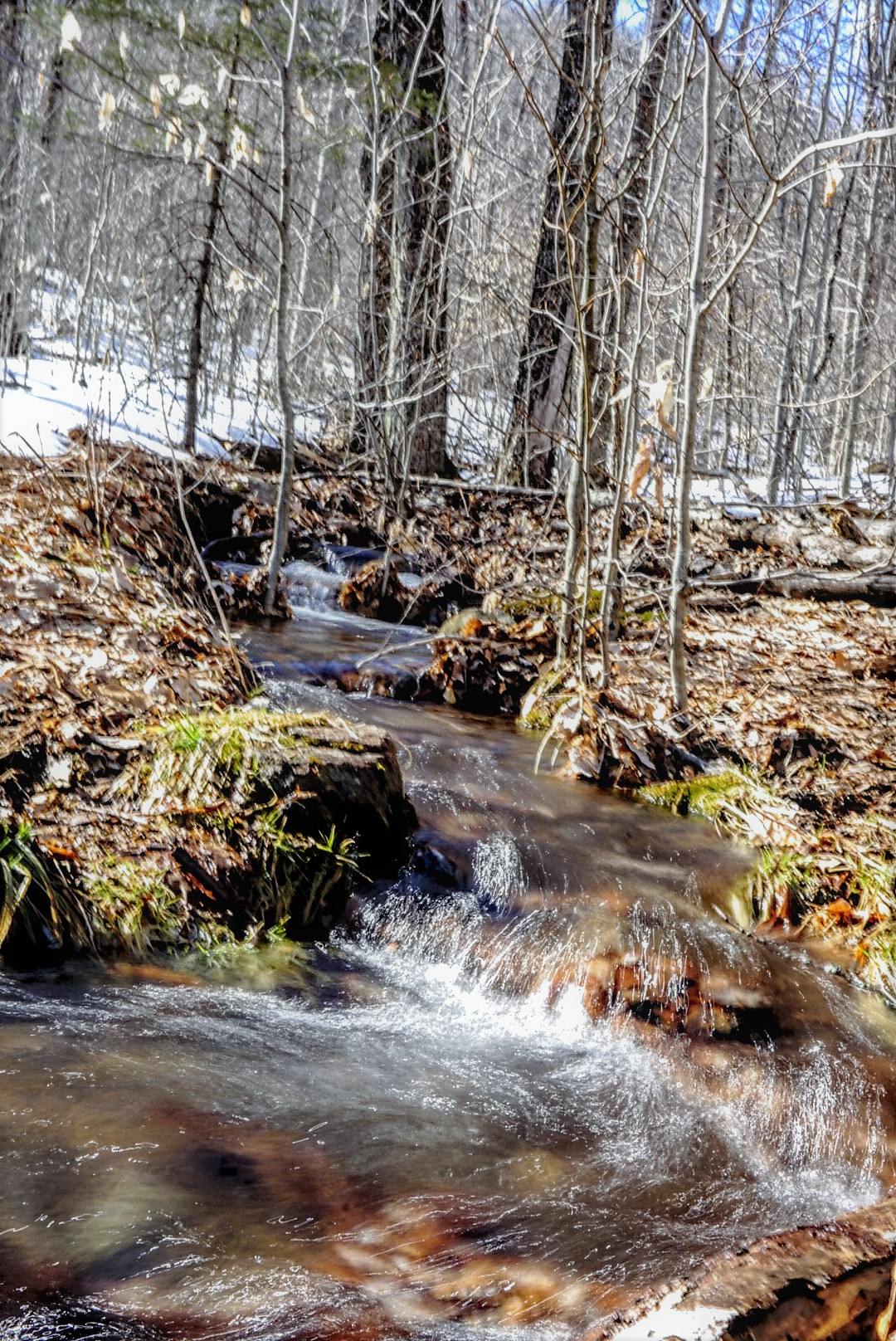 Shortly after that creek the trail started to ascend sharply. Surprisingly I didn’t have a hard time considering how out of shape I must be, and continued up slowly and steadily. 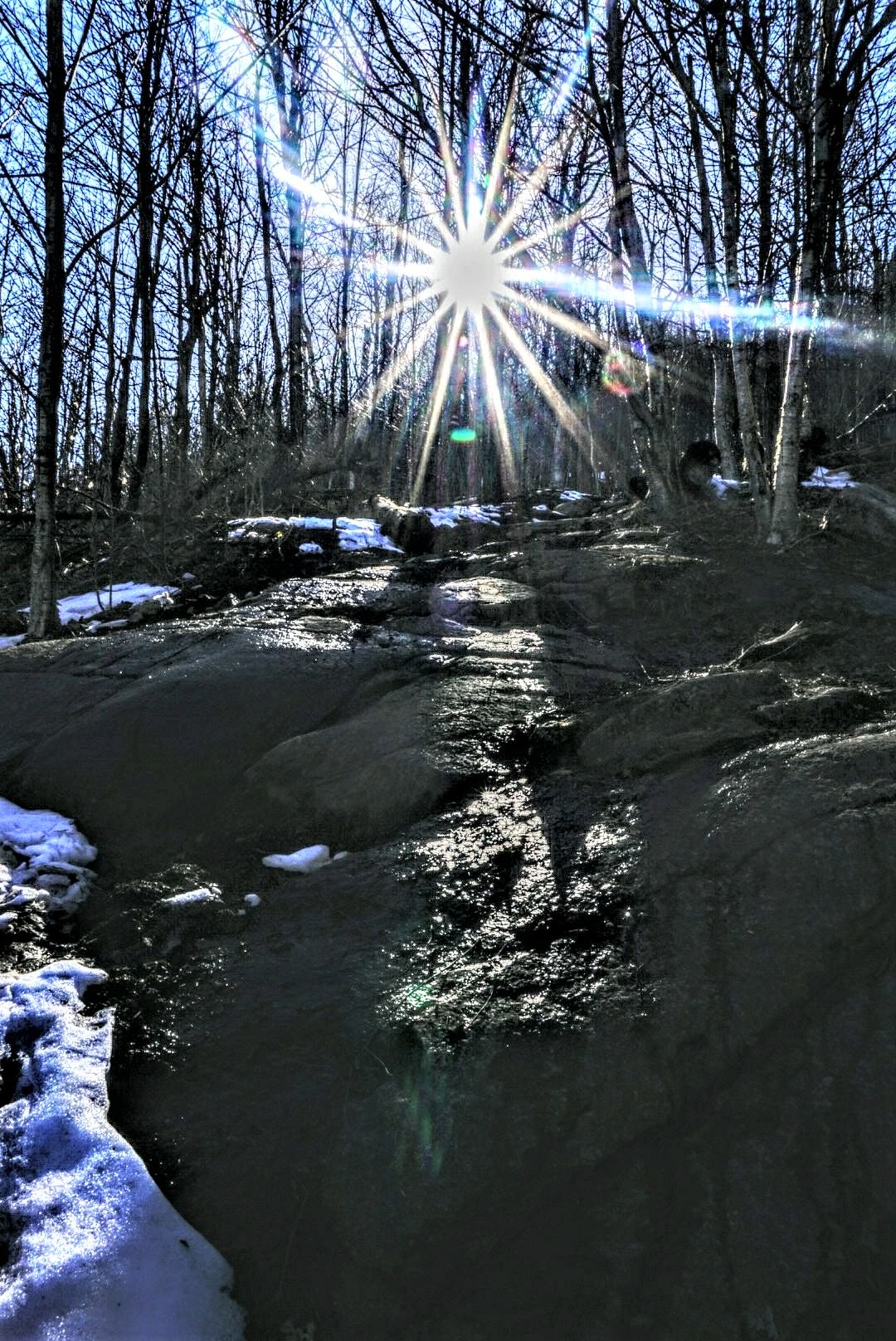 Of course, I had to stop every 6.2 feet to turn around to check out the views during the climb. And I wonder why it takes me so long to climb mountains….. 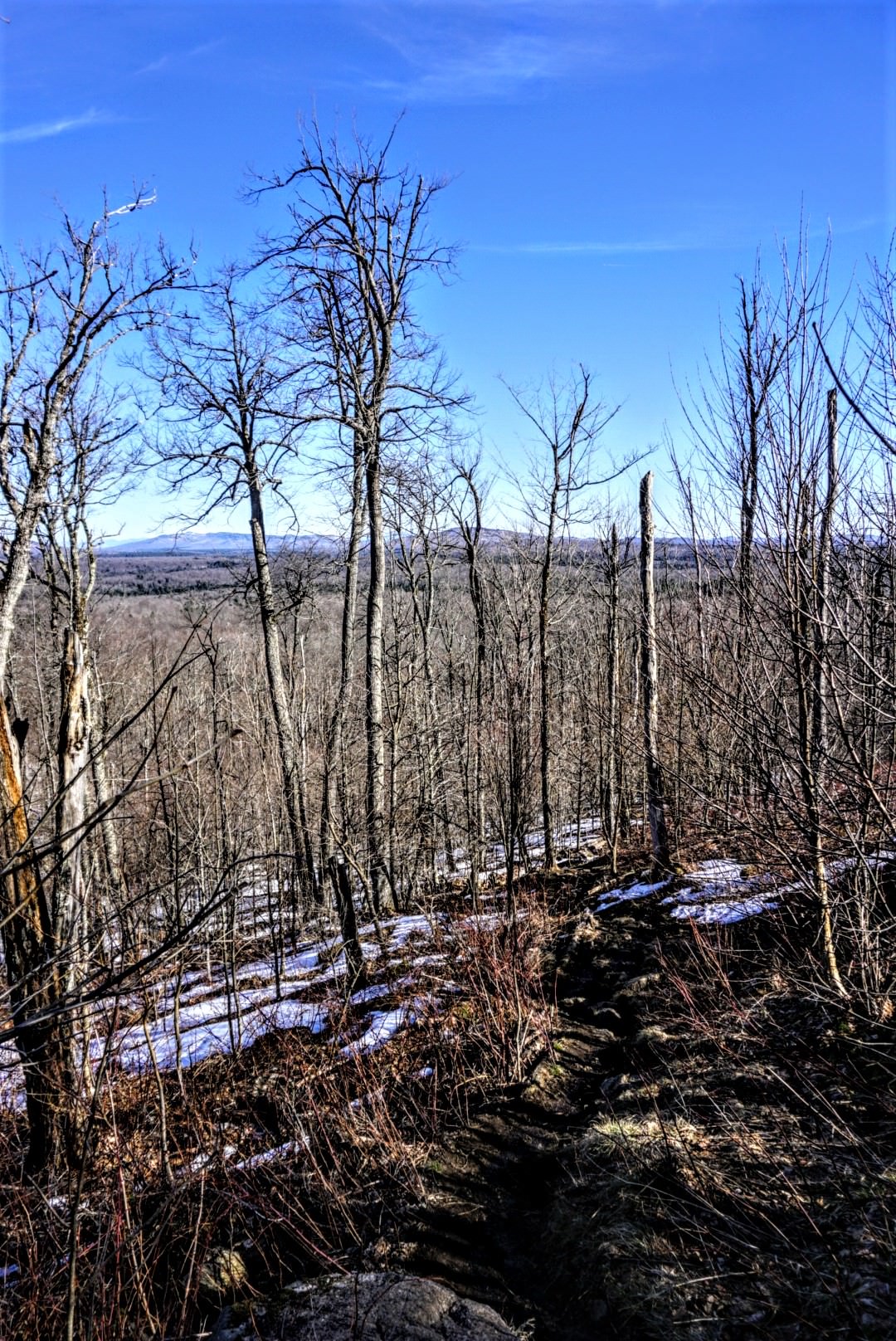 Along the way, two pairs of people passed us coming down. One group was playing music loudly on a phone, which was pretty irritating to me so I pulled off to the side with Juno to wait for them to pass. After waiting for 5 minutes and not hearing them get any closer, we made our way up and finally passed them…and I had to laugh because it was then so obvious why they were taking FOREVER to climb down…They were woefully unprepared. One of them was literally wearing boat shoes and cargo shorts! 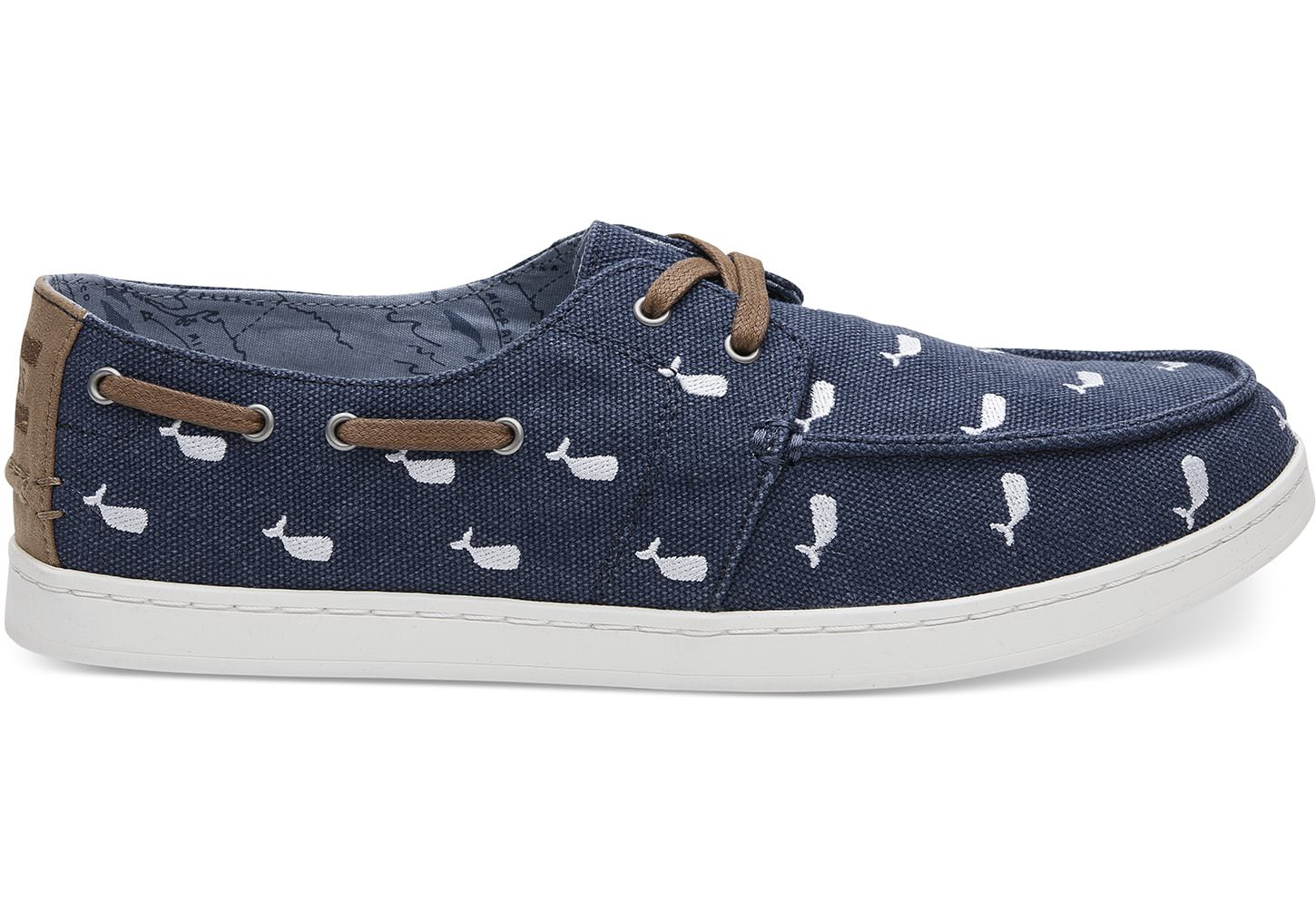 I passed them and laughed so hard. I mean, sure, Azure is an “easy” mountain to climb, but it’s still a freaking Mountain! In April! With a steep trail covered in slush and ice and snow and mud! Sometimes I really wonder about people….I thought they would be the only ones to make such a ridiculous decision, but several minutes later another group passed verrrrry slowly wearing very similar clothes. Even Juno wears boots when hiking! Anyway, about an hour after leaving the trailhead (5:30pm) and 0.9 miles of ascent, we caught our first glimpse of the firetower! 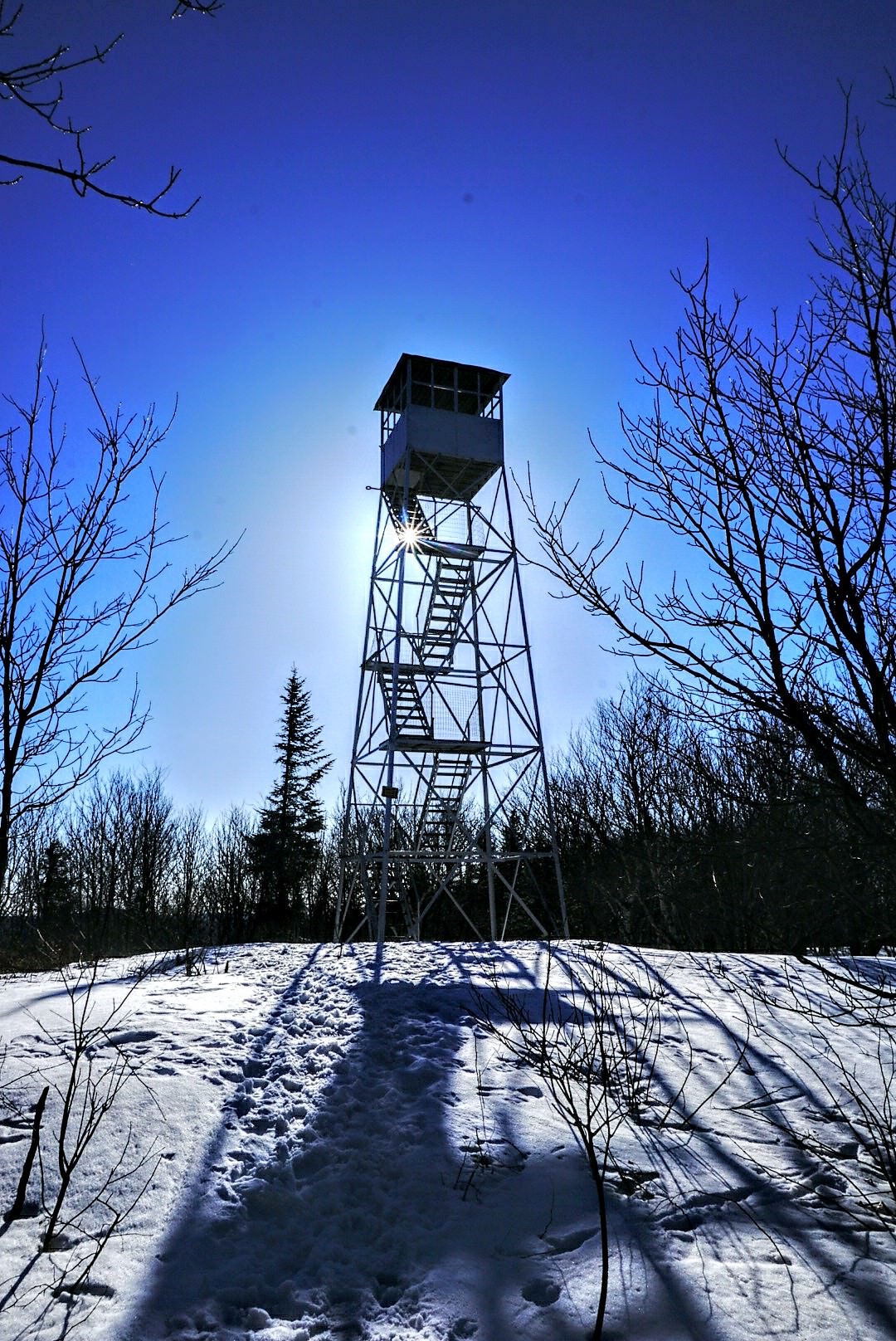 I scampered my way up there, dropped my pack, and ran to the ledge to soak it all in. I never know exactly how long I stand marveling at the view; the second I step foot on a summit all sense of time dissipates and I lost myself to the Adirondacks. The most amazing feeling. 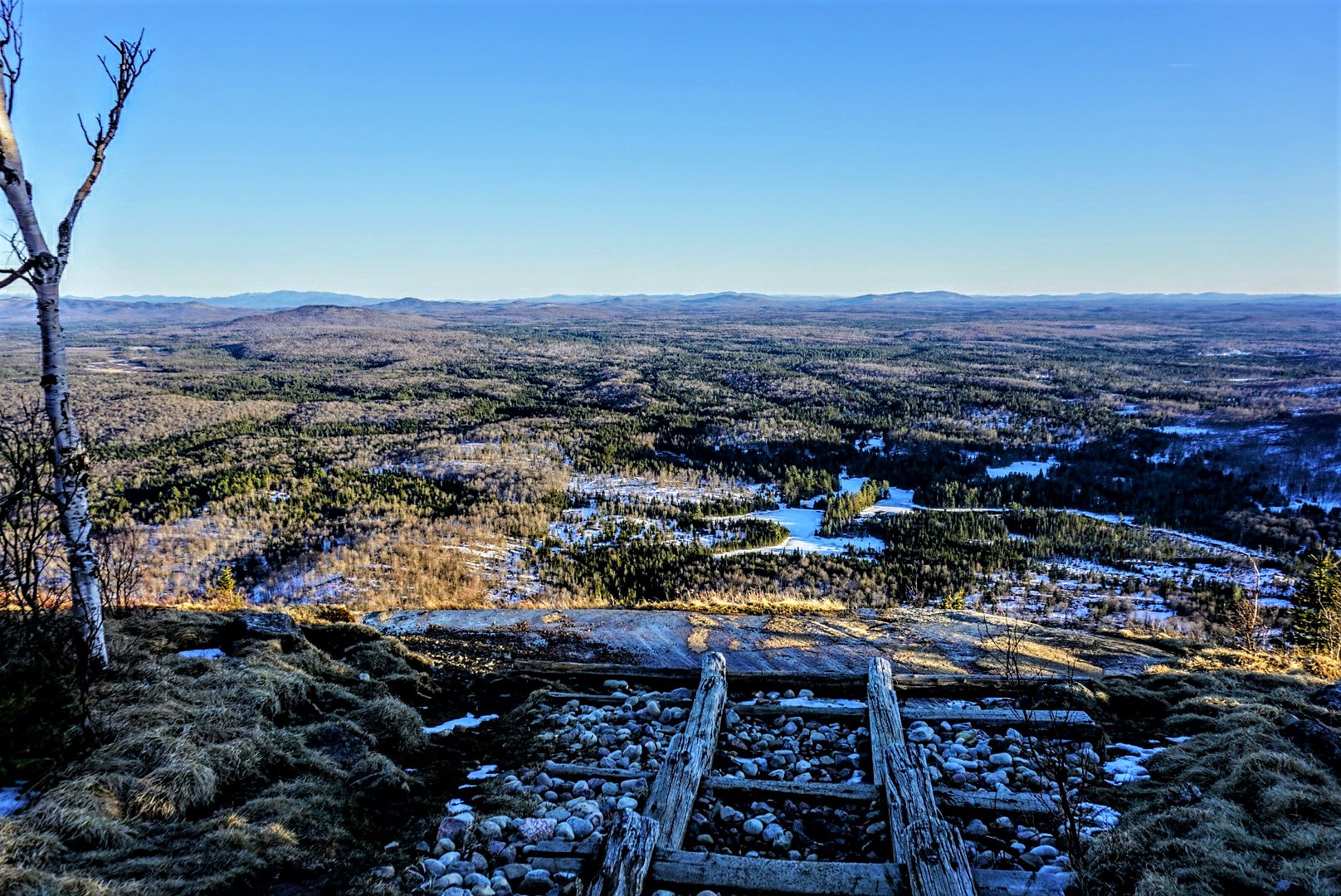 I stayed there for only a moment before go to the right to sit in the sun by “the boulder”. 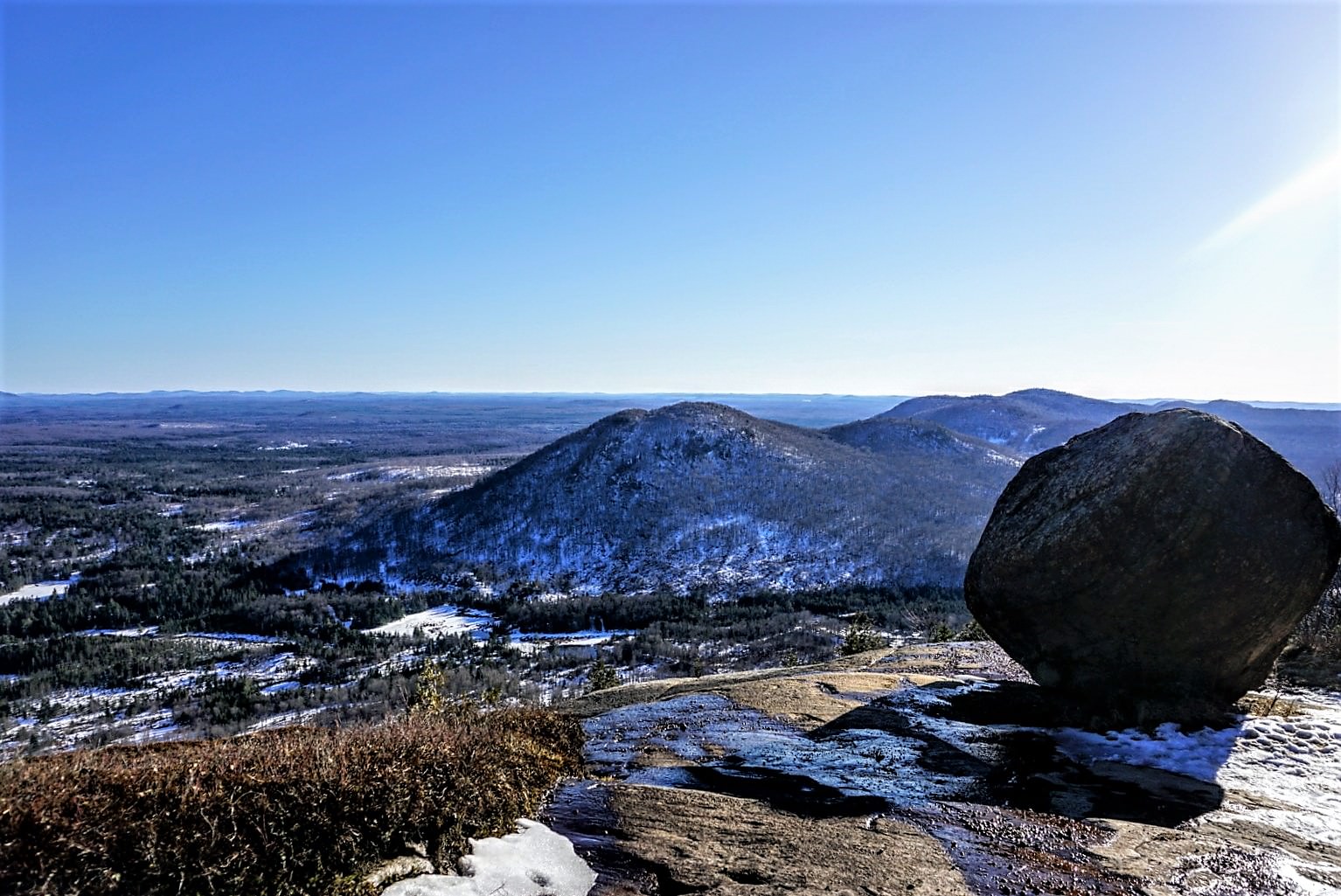 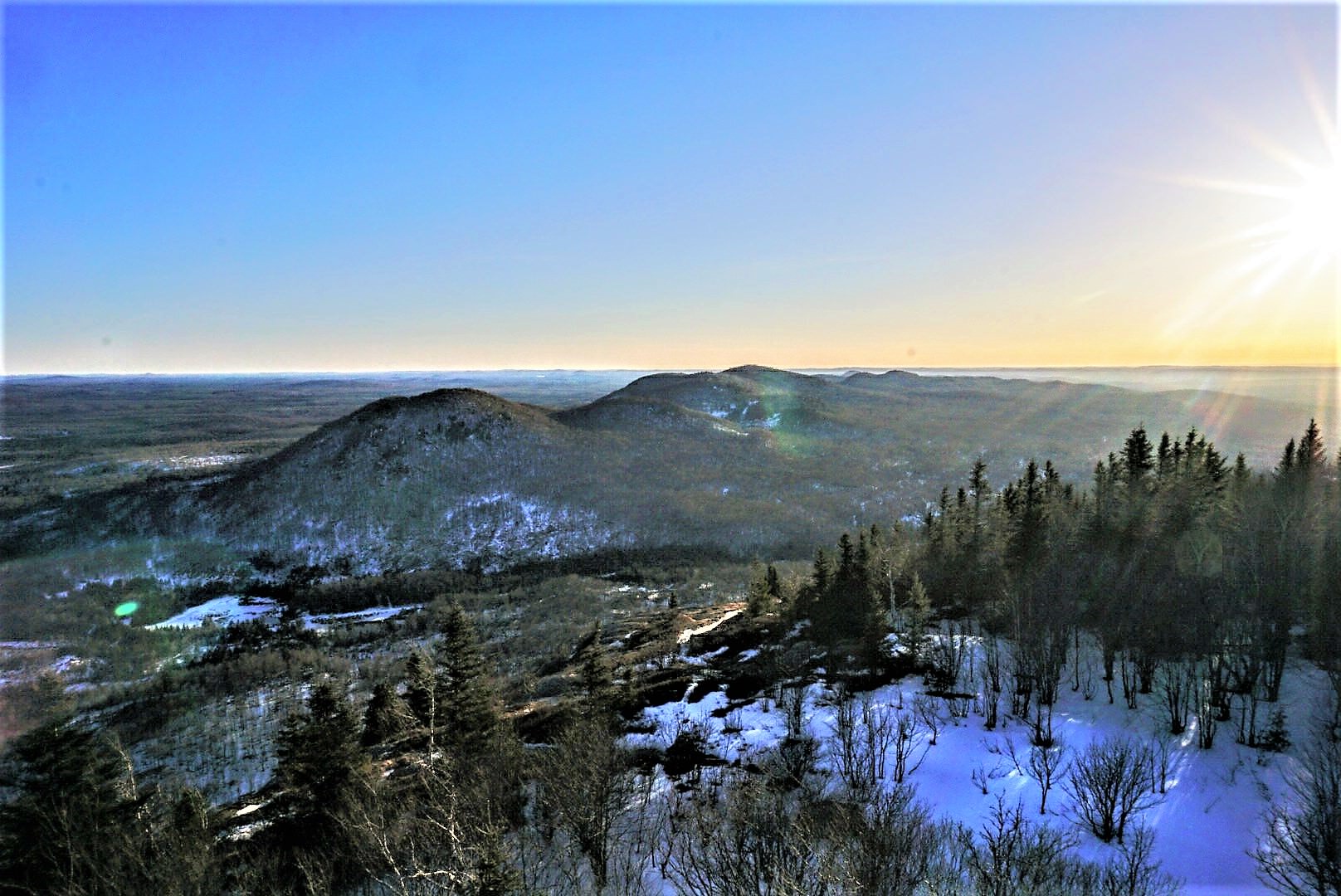 I lay on my back in the sun there for ages, watching crows fly impossibly far below as the sun sunk lower in the sky, until I noticed Juno starting to eat sticks and other non-edibles, at which point we proceeded to devour our typical ridiculous amount of food (and victory chocolate, of course!). 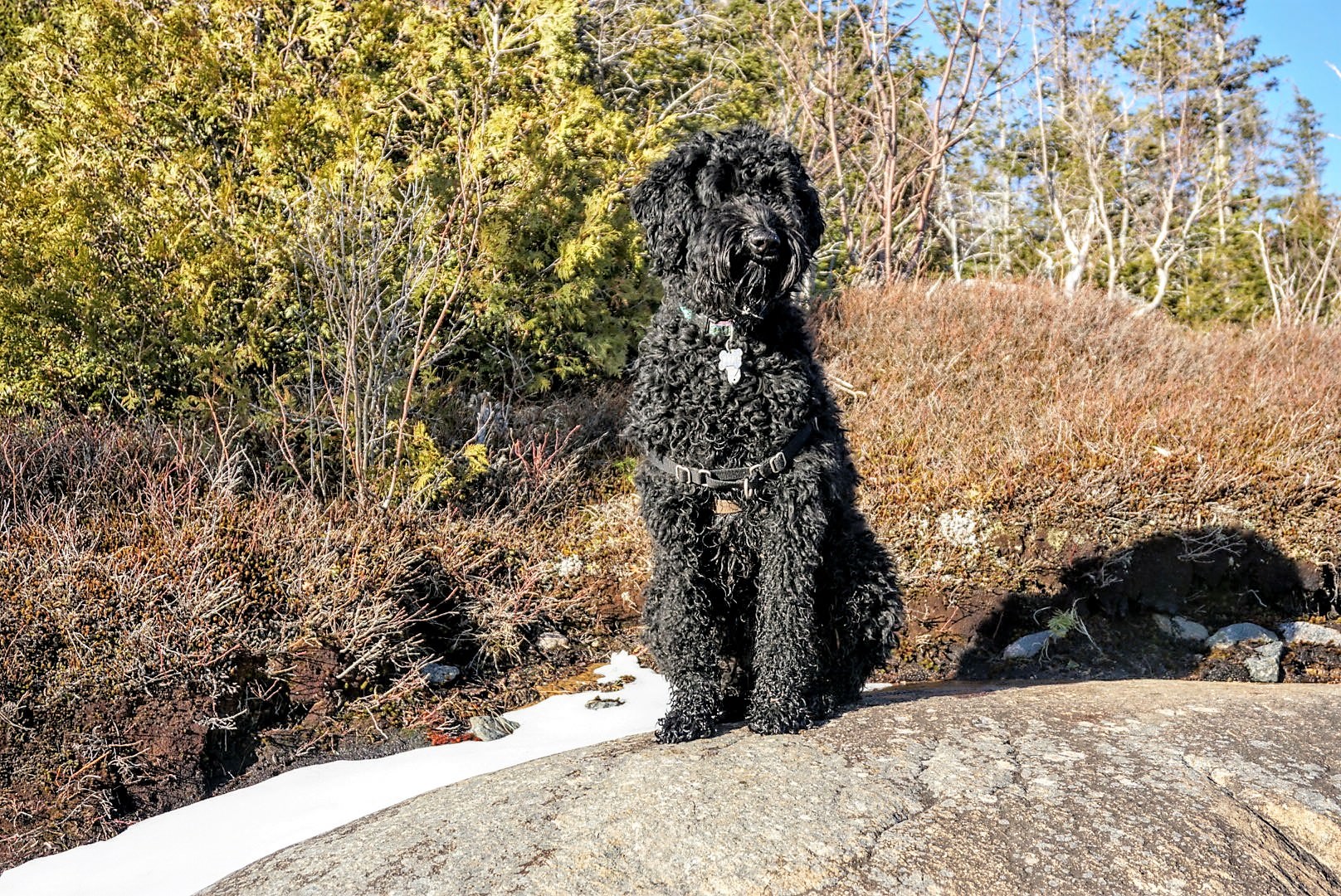 I decided not to stay up for sunset to facilitate the trip back down, and at about 7pm headed back to the fire tower to check out the views from there. Juno has apparently not learned from previous tower endeavors and followed me right up, much more confidently this time! 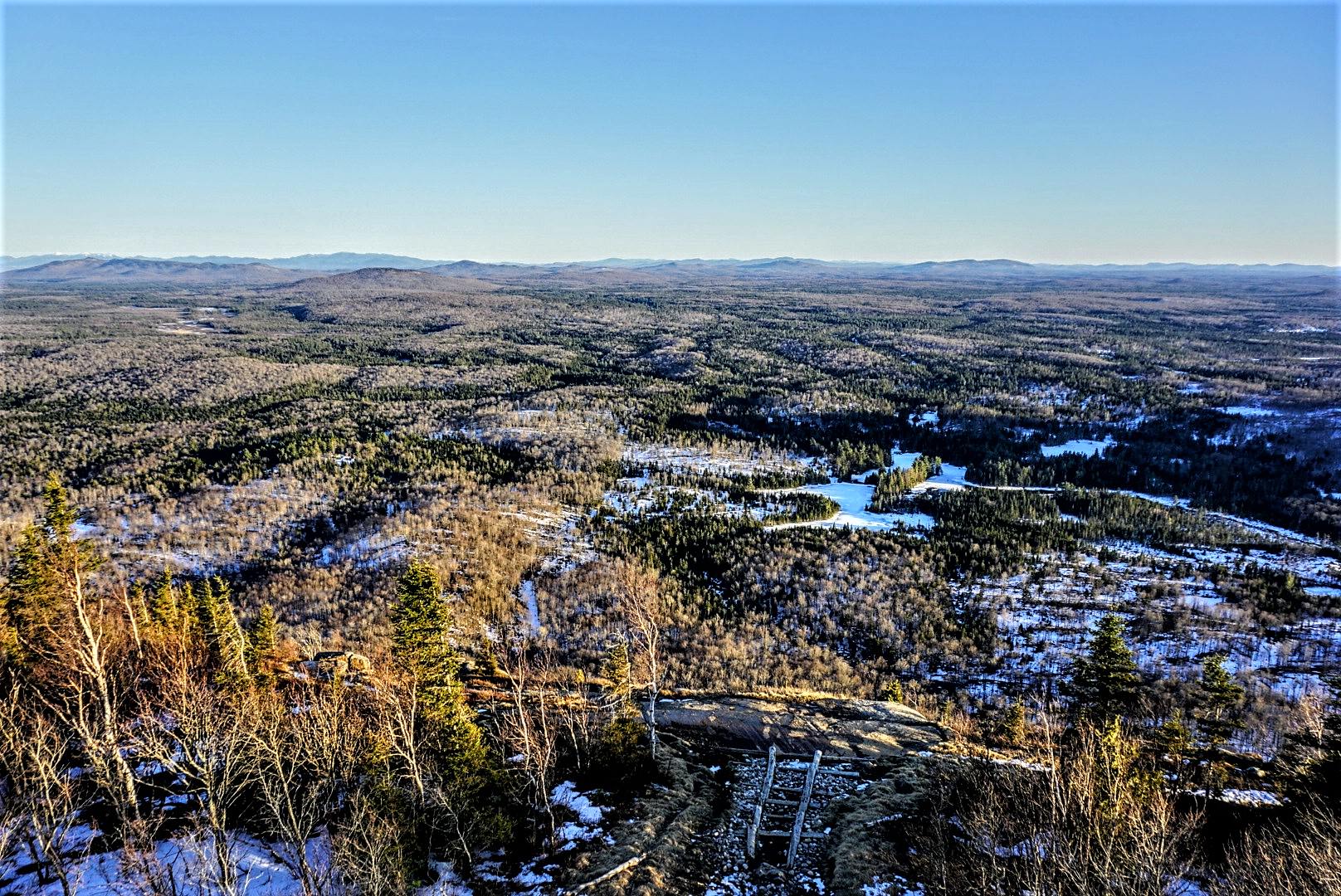 We finally took our leave at about 7:45pm. I was actually smart on the way back down and stowed my precious camera in my pack. The descent was partially walking, partially jogging with style, and partially skating. It was…an adventure! There was more than one well-placed tree I used to stop my momentum, and I never fell! (Ok ok I totally fell flat on my ass once, but it was so pathetic it was essentially just me slowly sitting down, so it doesn’t count.). When the trail became muddy again, I joined Juno in jumping in the muddies puddles we could find. Before I knew it we were back at the parking lot just as the moon was peaking through the trees at 8:30pm. 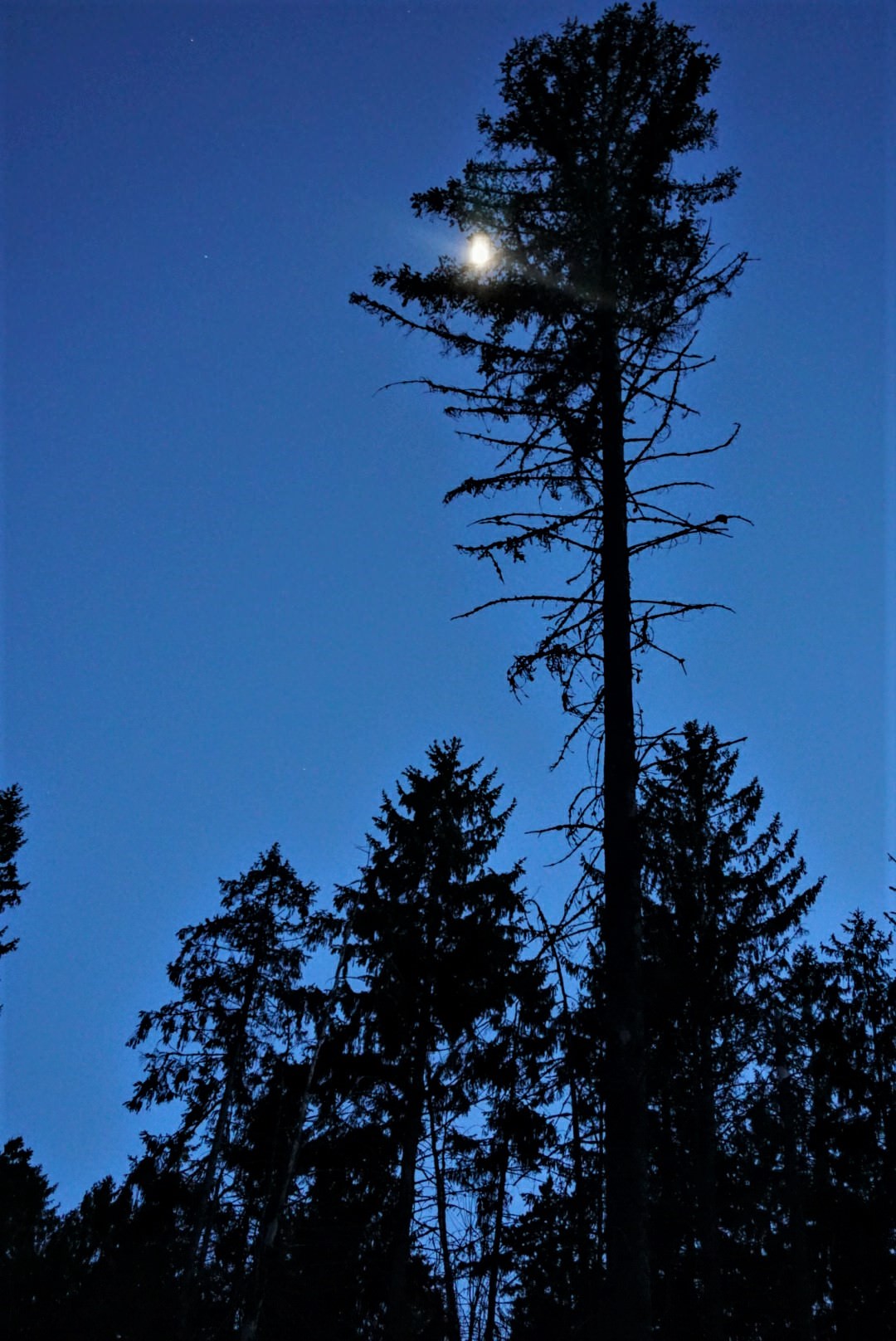