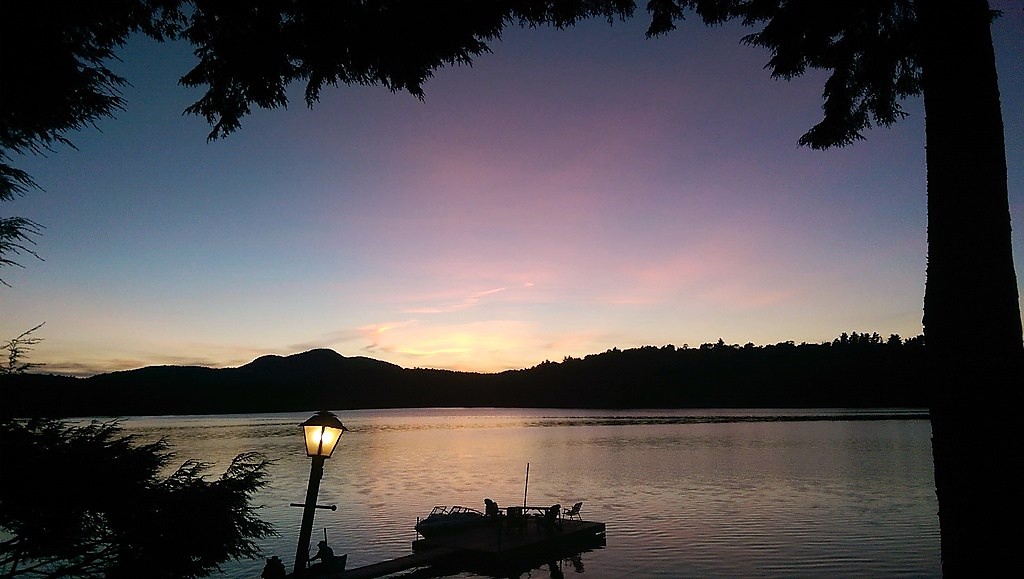 09/17/2016
This week, my parents were visiting from Ohio and we’d decided to take a weekend trip and stay in a cabin right on Long Lake. I definitely couldn’t pass up the opportunity to hike a new mountain, but I didn’t want to be away from my family all day long, so I decided to do a short one called Owl’s Head. I’d read online that it was a 3.2 mile hike, which I’d assumed was round trip…I was wrong, but happily so. When I arrived at the trailhead, there were plenty of cars already lined up, so I took my place in the back of the line and set out with my faithful hound, Juno, at about 12:15pm.

The trail started out with a bit of climbing, but leveled out soon after. I tried let Juno run around off leash for a little bit to burn off some excess energy, but there was an almost constant stream of people heading back down the mountain, and almost as many dogs as there were people, so I clipped her leash back on. Luckily for both of us, she was actually really good on her leash! (For once). After about a mile of completely flat walking through nice shaded woods, we reached a trail junction.

We had about another mile of pretty easygoing walking, and had to maneuver around a huge downed tree. Instead of doing the intelligent thing and going around the tree, June and I decided we could just duck under a part that was lifted off the ground. She of course slipped under really easily, but there was no way I’d be able to do the same while holding onto her leash. Luckily, there were a man and woman just on the other side who offered to take her while I climbed through, which Juno did not take well AT ALL. You’d think she’d been separated from me for a week by the way she was acting when I crawled to the other side less than a minute later.

After that, I set off ahead of the other pair at a pretty fast clip, and let Juno play in a few streams we passed along the way. Because I was holding onto Junes leash, I didn’t have my camera out and just didn’t take many pictures during the climb up, but honestly there wasn’t anything great to look at anyway. Just some regular run-of-the-mill woods. Anyway, I was starting to get real hungry, so we stopped on a nice big rock and had a snack. We shared some cheese crackers, and let the other pair pass us up so we wouldn’t feel pressured to go so fast. I didn’t mind, they were talking pretty loudly the whole time, and it was nice to be able to enjoy the sounds of the woods again. The trail got quite steep after this point, and the going was slow. It was a very scrambly trail and we had to watch our steps. I have to say, I was so proud of my little trailblazer pup; she hadn’t pulled me once, and kept right on pace with me. After what seemed like forever, we finally reached a high point, and were excited to see the remains of the old observer’s cabin foundation. (When I returned back to our cabin after the hike, I noticed a black and whit photo hanging on the wall showing a crew with their tents in the process of building the same observer’s cabin I saw earlier in the day!)

After this point, the trail dipped down to a col before leading us back up a very steep but relatively short ascent to the summit! We were so excited when we got here, we plopped right down and took a photo. We enjoyed some more cheese crackers and fruit leather, and took in the view while mustering up the courage to climb up the fire tower. We made it here at about 1:45pm.

Once we were rested up a little, I made the executive decision to climb up the tower. The problem is, dogs generally don’t like to climb giant swaying metal structures with steps that don’t have backs to them. She had to poke her head in between every single step and look at the ground below her, her little legs shaking as she tentatively climbed up behind me. With a few words of encouragement, I got her to the top, but she refused to climb up through the hatch to get onto the actual platform of the firetower, so she stayed on the top step. BOY was it windy! And cold! I did not stay up there long, since my dog is not the only one with a totally rational fear of heights, but I go some cool pictures of the 360 degree view, and we skedaddled back down onto solid ground where some trees protected us from the wind. Lesson learned, don’t bring dogs up firetowers.

Back on the ground, we wandered around a bit enjoying the scenery and Juno enjoyed giving me a heckin’ big concern every time she got close to the edge.

We rested for about half an hour, Juno lying on my lap, and decided to take our leave as the wind was picking up and clouds were rolling in. We were nervous about being on top of a mountain next to a veritable lightning rod during a storm, so we hustled back down the mountain. Going back down was SO much faster than going up! We went pretty slow going back down the steep sections, but we were really moving once the trail leveled out. After about an hour since leaving the summit, we reached the trail junction telling us we only had a mile left to go.

About 20 minutes later, we were back at the trailhead taking our leaving pictures by 3:30pm.

After this gratifying day, we returned to our cabin to go kayaking and sit by the fire with our family, watching the sun set across the lake. Not a bad way to end the day!

* Side note: I looked and looked, but found no evidence of owl heads on Owl’s Head mountain. In case you were wondering. *