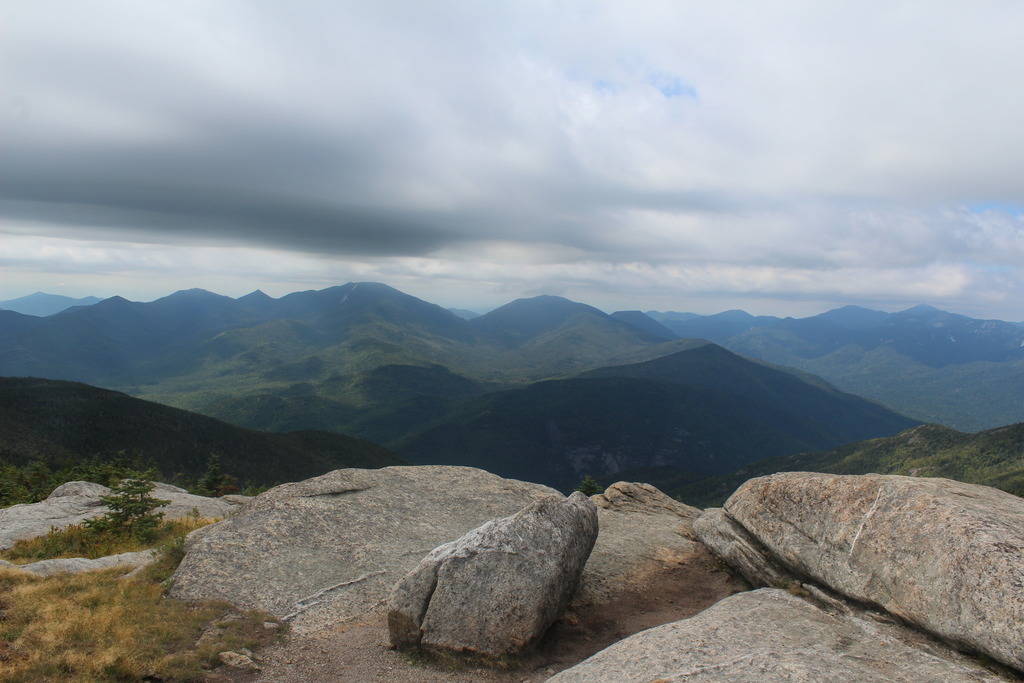 I woke up bright (er…dark) and early and got out of the house by 4:30am to do this hike. My parents were due to visit from Ohio sometime in the evening, and there was a possibility of rain (and even thunderstorms) in the early afternoon, so I thought I’d get this done quick and easy, the earlier the better. So I arrived at the trailhead on 73 for the Roaring Brook Trail, signed in at the register, and set off by 6:45am.

Immediately after leaving the register, I got a view of the so-called “Roaring Brook”….Not a single drop of water. This was really depressing, because the reason I wanted to use this trail was to visit the top and bottom of roaring brook falls, and it wasn’t looking like much would be going on.

Two minutes after leaving the register I came to a junction, and went right to see the bottom of the falls. I wasn’t expecting much, but I could definitely see how this would be an incredible sight with a lot of water. Guess I have to come back in May!

The walk through the forest was uneventful but pretty. It was still dark in the woods with the sun so low, and I passed a few campers still asleep in their tents. After the short walk back to the junction sign, I started the climb up the trail, which was relentless but not technically difficult. After 10 or 15 minutes, I came to another junction sign for a spur trail to the top of the falls. I though, what the heck, it’s right there so I might as well go see it even if there’s almost no water.

HOLY COW was it worth it! This was the COOLEST place! There were places for camping right nearby, and I could climb out into the brook on rocks and see the mountains in the distance. I stayed here for longer than I should have, enjoying the crystal clear waters and indescribable view.

The trail leveled out a little bit after the top of the falls, and after about a mile I came to the junction leading to Giant’s Washbowl on the right, and Giant Mtn on the left. I went left, with the intent of descending via the other trail and meeting up with this trail again at that junction.

The going was easy for a little bit after this point, with the trail crossing the brook once or twice more.

Then the real climbing started. And it did not let up. It was some serious climbing, but the path was relatively easy, increasing in scrambli-ness the further up I went. I encountered a few wearied backpackers descending the mountain at this point, but that was it. About 2.5 hours after I left the trailhead, I was excited to find some built-in stairs, which in my mind meant that the summit was near…false hope! It was not!

At this point, the trail increased in difficulty. I was much steeper and not as easily navigable, so the going was slow.

Not 10 minutes after climbing the ladder, I arrived at the junction sign for Ridge Trail, which leads back to Giant’s Washbowl, and the sign saying ‘Giant Mtn: 0.7 Miles’. Woohoo! 0.7 Miles! That should take me less than 30 minutes!…There was a lot of false hope on this trip.

The climbing picked up immediately after that sign, with lots of scrambling and slides, until I came to this amazing ridge. I could see the mountains around me looking both left and right through the trees, and I could see the looming shadow of Giant up ahead, and boy, it did not look close.

The ridge led to the base of Giant, and the climbing was very very steep and difficult, often straight up slides. Towards the top, I passed a junction sign for Rocky Ridge Peak, saying the peak of Giant was 0.3 miles away. Finally, after 3.2 hours of hiking, I reached the wiiiindy summit.

The views were stunning, but I could only stand to be on the very top for a few minutes at a time. My thermometer read 62 F, and it was incredibly windy. I was wearing long trail pants and a running jacket, and still needed to put on my windbreaker. I was so glad that I had it on hand! I climbed down a little bit to take shelter from the wind, and enjoyed my midmorning snack. After resting my feet and warming up some, I ventured back up to the summit to take a picture with the summit plaque.

I didn’t stay long up here; it was cold and windy and I wanted to head over to my second peak. So I headed back down to the junction, and turned left at the sign.

Shortly after descending a few feet along this trail, I encountered an older gentleman enjoying the view from a rocky outcropping. We chatted about how far down we have to go before climbing back up rocky peak, then he let me pass him and I carried on.

He was not kidding when he said this trail would make us work. The trail was only 1.2 miles long, but it was just straight down. It was so very demoralizing, and all I was thinking was how I’d have to come right back up on the way back up Giant, and how there was no way I’d make it back to the trailhead by 2pm. Nevertheless, I carried on, and while I stopped to take a picture of Rocky Peak Ridge looming in the distance, the gentleman (named Tim) passed me right up. Did I mention I’m incredibly slow climbing down?

After what felt like losing 1000ft, I reached the col, and snapped a photo of RPR standing in front of me. The climb up was so much easier, it was relatively gradual and I made it in about 20 minutes from the Col, passing Tim along the way.

An hour after leaving the junction, I made it to the summit at 11:30am. I told myself I could enjoy the views until noon, the I had to be back at the junction by 1pm. I quickly walked over what was clearly the highest point of the bare summit to get to a slightly lower portion of the ridge that was less windy so I could enjoy my lunch and victory chocolate.

I was here for several minutes before Tim rejoined me, and an entire troupe of tired-looking young backpackers filed up the mountain shortly after. The didn’t stick around though, and neither did Tim, so I had the mountain to myself. I was getting a little bit nervous, however, because it was getting even windier, to the point that it nearly knocked me over, and dark grey clouds were rolling in. So I went back up to the true summit to take a few last pictures and headed back down to the col.

Along the way, I passed the large group resting along the trail, and learned they were an outing club at a nearby college. I got back to the col, and started the exhausting climb back up Giant. Actually, it was a lot worse coming down this part than it was going up. I flew right up it in about 20 minutes, passed Tim again, and took a few minutes break back at the junction since I made it before 1pm.

I enjoyed my last view, then headed as fast as I could back down the mountain. It was getting increasingly dark and windy, and I was sure the skies would open up before I made it to the bottom, so I decided to forgo my side trip to Washbowl and go back the way I came up. The trip down was absolutely uneventful though. I kept pace with a few groups as we leapfrogged each other, and my knees were killing me. I didn’t take many pictures on the way down, just a few of some pretty little berries and flowers growing alongside the trail.

As I neared the bottom, light rain started trickling through the leaves above me, but nothing serious. In the last mile or so, I knew I was getting close, so I started jogging and TOTALLY missed the junction between washbowl and the trailhead, and ended up going half a mile in the wrong direction. I even kept thinking to myself “This doesn’t look familiar…” but I didn’t know for sure until I reached a little junction sign to Nubble. I turned right around, and ran the rest of the way back. I made it back to my car at 3:10pm, almost 8.5 hours after leaving. I jumped in without even taking an exit photo, ripped my boots off, and sped home to make it there before my parents did. 39 more to go!

We had such a great time ziplining in Tennessee! Could have done that all day!
Yesterday was a long day after the Smokes, with the Ripleys museum, mirror maze, and aquarium. As you may or may not know, seeing penguins is always a pretty big deal for me so it was a pretty great day!
We headed up to #newfoundgap this morning to see the sights and found ourselves firmly in a cloud. I dont mind, I like the different views clouds offer than blue skies!
We enjoyed a show at #countrytonite theater last night with some really incredible musicians! Heading off for some more adventures today!
We're off to Gatlinburg today! We can't believe how far into Spring Tennessee is already. The dogwoods and red buds are in full glorious bloom and the bright green of the grass and trees is a welcome sight.
They don't call 'em the Smoky Mountains for nothin'!
We spent 15 hours yesterday driving from NY to TN to visit my grandma. Got up this morning and headed right up to Roan Mountain - the wind was so fierce it pulled the tears out of my eyes!
What a dog 😍🖤🐾