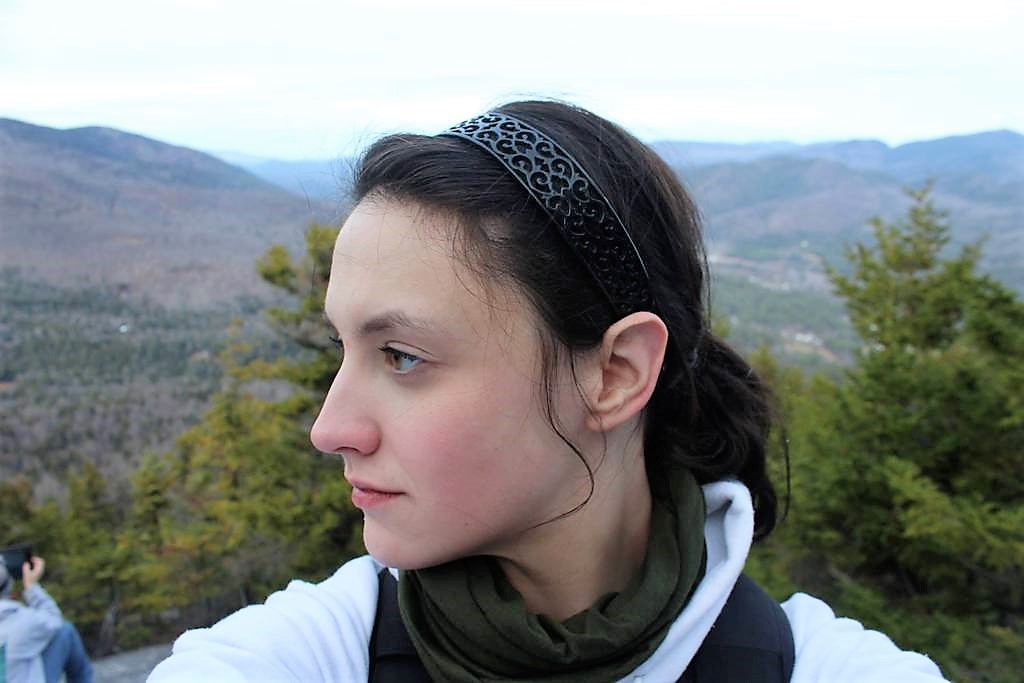 The weather was chilly as we set out to climb Rooster Comb, so on our way there we stopped at this awesome adventure gear store (The Mountaineer) and bought some convertible scarf things to keep our necks and ears warm. We got to the trailhead on route 73 in Keene Valley and signed in at the register, then started off following a wooden bridge around a little pond behind Keene Central School. The trail followed a little stream, so we of course stopped for pictures.

We really took our time with this hike. The temperature outside was so comfortable to be in (as long as we were bundled up) and the trail offered a lot of interesting sights on the way up.

At about 0.7 miles, we encountered a junction with Snow Mountain, which we considered going up as well, but decided to at least do Rooster Comb first since we probably weren’t as ambitious as we thought we were. The trail was very well maintained, and there weren’t any sections that were particularly difficult. We continued a steady climb until we reached another trail junction at about 2 miles; Straight led to Hedgehog and Lower Wolf Jaw mtns, and left was another junction with the Snow Mtn trail…It’s like the universe was trying to tell us something…

At 2.2 miles, we reached another junction with a little side trail leading to an overlook 0.1 miles away. I don’t recall taking the side trail, and think we just kept moving up to get to the true summit at 2.5 miles. The views were incredible from the top, which was a mostly-bare rock face that had cliff drop-offs on 3 of the 4 sides. It made for some impressive photos!

We relaxed up at the top for quite a while. We had the peak to ourselves, so naturally we goofed around taking all the pictures we wanted (and jumped off of some rocks, too).Lucky thing that we had stopped at that shop beforehand; we had our neck warmers pulled up over our faces to block out the biting wind.

The lighting behind the mountains in the distance was magnificent, but I just couldn’t seem to capture it. We enjoyed the scenery anyway, and the views of Keene Valley from high above with the high peaks surrounding.

After 30-40 minutes at the top, we started to get chilled from the wind, and took our leave. We took our time (as usual) and took a lot of pictures of the path on the way down as the sun was getting lower in the sky.

We had decided against climbing Snow mountain due to the setting sun, but we regretted it later since it was only a little over a mile detour. Oh well, next time! We eventually made it back to the pond near the trailhead, and looked back on the mountain we had just climbed.

One thought on “Rooster Comb Mountain”