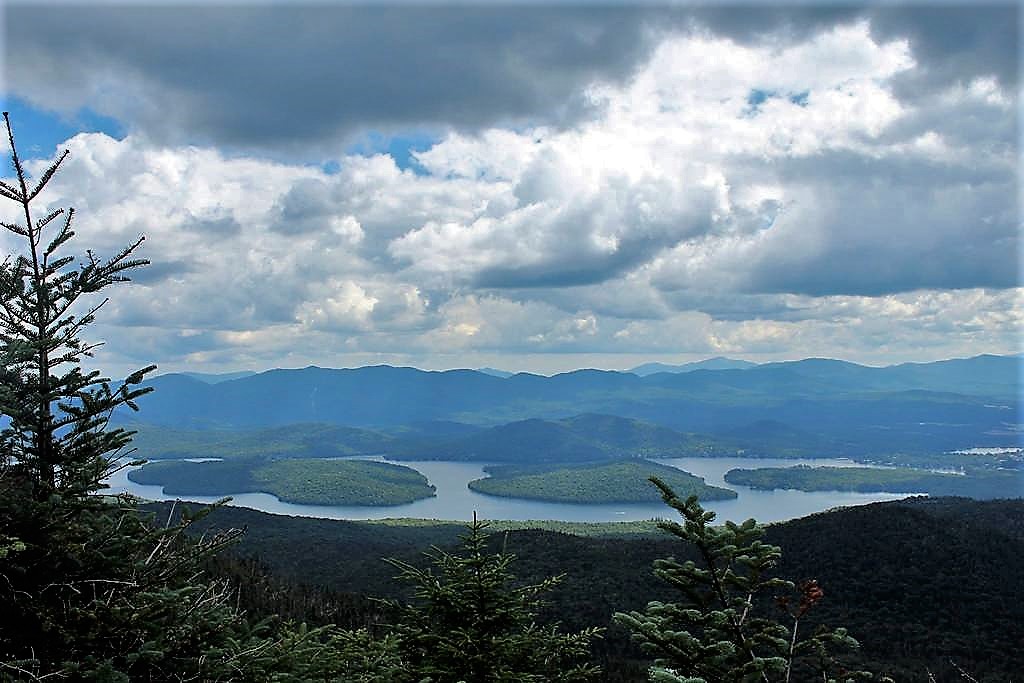 I was still operating with serious hiking deficit ever since I sprained my stupid ankle, so I made a deal with myself the Monday after climbing Scarface Mountain that if I got everything done at work that was on my to-do list, then I would climb McKenzie Mountain on Wednesday, and finally be a Saranac Lake 6er. After pushing myself for 2 days, by Tuesday afternoon I had finished my projects and was already daydreaming about mountains. Juno and I set out at about 8am Wednesday morning (I happily wake up earlier to go hiking than I would to go to work). Since the last climb up McKenzie was such a disaster, I had decided to start at a different trailhead called the Jackrabbit Ski Trail, and we got there in time to leave the register at precisely 10am. 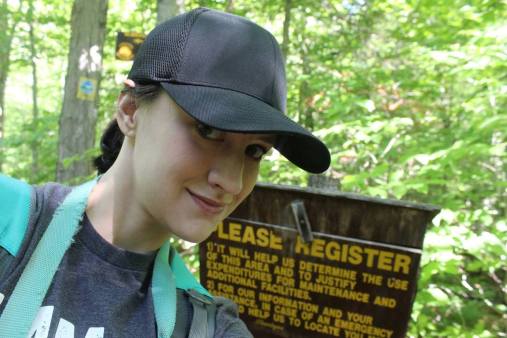 I had attempted this mountain once before, but didn’t quite make it to the top…The trail was disastrous: part of it was just a river, with no trail around (the river was the trail) and the other part was vertical climbing on disgusting mud slick shear rock faces…needless to say, I was hoping today would be better!

Juno of course took off immediately, totally in her element. We started the hike at the Jackrabbit trailhead, instead of the official McKenzie mtn trailhead, as it’s a little shorter. Nonetheless, it was a relentless gradual incline right out of the gate, and I was nervous it would continue that way all the way up. Well, the trail leveled out, my loyal hound led the way, and she waited for me (sarcasm) as I snapped some pictures. The trail was pretty boring, but at least it was easy going.

After about 40 minutes, we reached the junction of the Jackrabbit and McKenzie trails, and turned right to head up the mountain.

We stopped shortly after to have a snack and guzzle some water before the real climb started. We didn’t rest for long, because flies orbiting my head is pretty much the thing I hate most in this universe, and they tend to flock to me when I’m not moving…so on we went!

This is the part of the trail that had previously been a river…all dried up! Happy for hiking convenience, sad for the river’s little inhabitants.

The trail soon got very, very serious, but Juno had no problem running up and down to show me the way. Or try to knock me down. Whichever.This was pretty much the start of the vertical climb. Did I mention this trail ascends over 1000ft in half a mile?

While I was catching my breath (for the 138000956th time) and Juno was off harrassing chipmunks, I saw these little cuties! They were so tiny!

I’m going to start calling McKenzie Mtn “HopeKill mtn”. It was literally a vertical climb, and every time I’d look up, I’d see that the trail turns, so I’d assume (with a lot of hope) that the path levels off!…No dice. Every time I’d round that corner, the trail would just continue straight up.

I took the opportunity for me to catch my breath under the guise of snapping a picture of this big fella!

We soon came out onto the ledge of the summit!…

The path leveled out temporarily, and we relished the break. These bright red mushrooms were all over the place! So cool.

The trail started to climb again, and we reached the 2nd false summit right around noon.

Trailblazer pup led us through another nice wooded FLAT section, until the trail became vertical again, and we reached the 3rd false summit about 10 minutes later. We didn’t waste any time and carried on.

After a final bit of climbing, we reached the 4th false summit after about 5 minutes at 12:15.

This was the point I was dreading. I looked to the right, and saw this:

THAT is the true summit of McKenzie Mountain. It is certainly not the thing you want to see after more than an hour of absolutely exhausting, vigorous climbing (not to mention the hour of walking before that). It means that not only do we have to climb down the mountain that we’re on and climb right back up to get to the peak, but we have to do it again on the way back. Luckily, we ran into an older couple (who were climbing all of the saranac lake 6ers in 24 hours! Holy Crap!) and they said it only took them 15 minutes to get from the summit to where I was standing. So, spirits lifted, Juno and I set off.

Obligatory summit selfie. There were no actual views from here, however there were a couple of little trails leading off to ledges on either side of the ridge.We took the first trail on the left coming back from the summit and were rewarded with these views of Lake Placid.

Looking back on these photos, that dark cloud right on top looks pretty menacing! But it was actually pretty sunny while we were up there. Juno was loving it up there, there was a slight refreshing breeze. Every now and then the thirsty pup would come back to the mothership for some water, which she promptly spilled.

Then Juno took some glamour shots of herself and munched on a stick.

At this point, we were being totally swarmed by flies. And not just one type of fly, either. Imagine every type of fly that you can, and it was there. And it was buzzing in my ears, making me flail my arms like an idiot to try to make contact. So unfortunately, I didn’t want to spend too much time here. I took one more photo, and headed back toward the summit sign, and down the trail.

But wait! I forgot that there’s another trail leading to a much nicer outcropping, with some rocks for lounging away from the trees (and flies!). You can see some towns in the distance on this side of the mountain, and we could even hear a train going by somewhere far below.

I took the time to have a little nap in the sun and admire the scenery. It almost felt like standing on the wing of an airplane, being up there. Incredible.

June ran over to give me some dirty sticky kisses, and I quickly grabbed my camera and snapped a photo hoping that (a) we were actually in the shot and (b) that we weren’t zoomed in on only my nose. At this point, it was getting quite toasty up there, so we headed down after enjoying the views for ~30 minutes. Because the ascent was so steep and treacherous, and my camera is delicate, and my pack weighs 40ish lbs, and my ankles are still weak, I put my camera away and took out my hiking poles (which SAVED my knees, btw). So there are almost no photos on the way down, not that there were even good places to stop and rest.

After an hour of careful foot-placement, we made it back to the junction with the Jackrabbit trail. It was completely uneventful, but my toes were really beginning to hurt again even though I had them nice and taped up when I left in the morning.

After half an hour or so we passed a lean-to, which of course doggy had to explore, and I put my camera away once and for all. We were both so hungry and exhausted that I didn’t even bother to take a photo at the end 😦 We eventually made it, and I wrenched my boots off immediately and peeled off my socks. I was genuinely surprised to find that my pinky toes were still attached! It really felt like they had mutinied or ceded from the feet or something. Nevertheless, they’re there, big, swollen blisters and all. At long last, I let June in the car where she wasted no time in curling up to sleep, and we headed home.

Total Duration: 5 hours exactly
All images are property of adktrailtalesandtails and may not be used unless with express permission.

😍 saw this beauty on my walk this morning, it was the size of my hand!
Happy Monday! 😎✌️
As always, we had an epic remote camping trip over the holiday weekend! It rained all day on saturday but we were still able to sneak in a paddle to an area that looked straight out of jurassic park 🦖
Going off grid, remote camping for the weekend! Hope you all have a great weekend! 😎💚
Ive been spending too much time foraging for berries with Juno. How do I know? Well.....#shepicksherownberriesnow
Happy almost-Friday!! Idk about you but I am READY for the weekend! #funwithfilters
Outfit for the day while I endure 90 degrees and insane humidity on my daily walks 🥵🥵🥵
Please excuse my shameless selfies, I've just bought a bunch of new clothes and I LOVE THEM! Or...I love how they make me feel when I wear them! #selflove